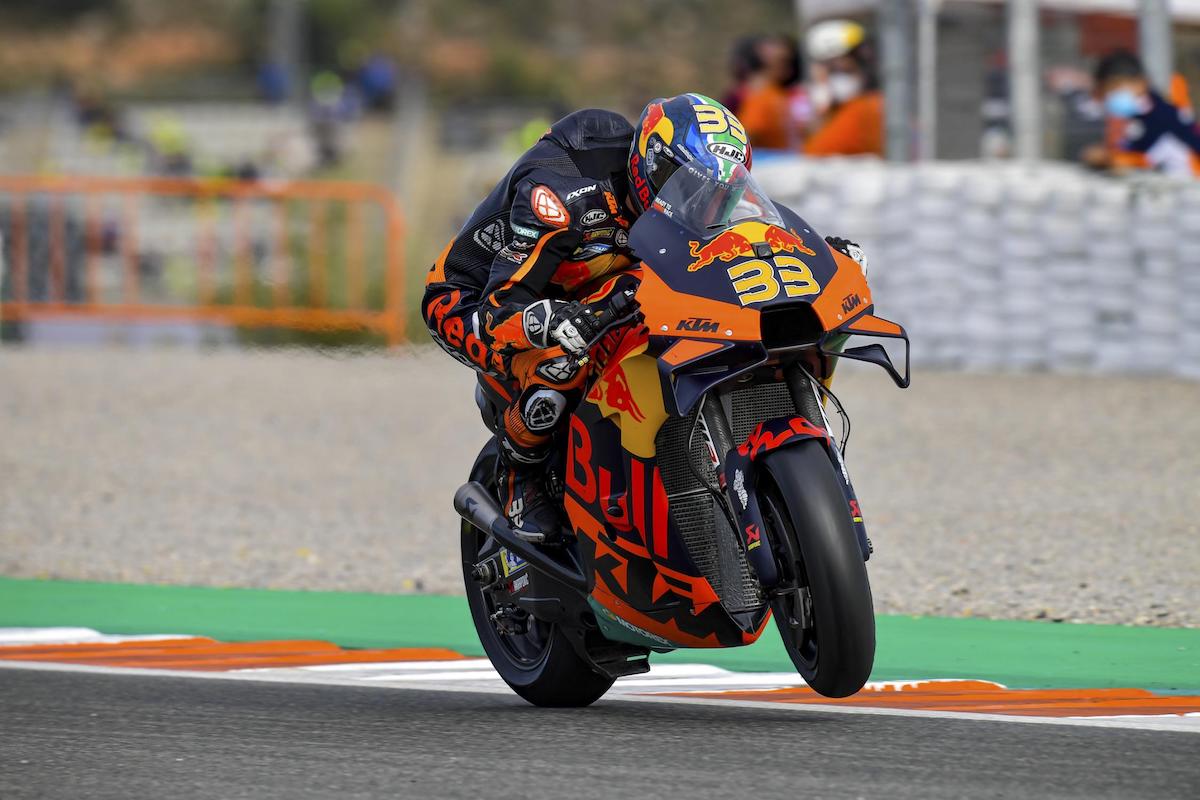 We were first treated to some snippets of Rossi doing Rossi sht throughout the century he’s been doing Rossi sht. A great way to hammer home exactly whose weekend this is.

Because whoever wins whatever at Valencia 2021, they’ll be the B-side to the A-Side Number One Hit: #GracieVale.

Can someone PLEASE go clean off that smudged AF camera lens? Trailerpark be looking like a piece of smudgy ‘modern art’; and it triggered my must-clean-glasses-OCD. Continuously.

Öncü is back from his forced vacation. For the love of sanity, child, don’t cause another motorcycle-tsunami.

There shall be no Izdihar – the Indonesian’s season ended a few days prematurely when he dismounted during practice… at speed.

Q1 was a showcase of the Flying Japanese. Sasaki’s first tumble transpired with him clinging to the handlebars as though he’d been superglue-pranked. Or perhaps he was trying out a new form of moto-yoga.

His second offing went as follows: first, his bike helped him launch up into a record-high orbit above the circuit; then he realised that he’d forgotten to pack a parachute for re-entry. Coming down, he had enough time to utter at least three times the word for ‘Oh Sh*t’ in Japanese before landing. Hard.

Luckily, he was shown sitting up next to the track, before being taken for his medical centre check-up.

On to the second qualifying session, and we once again see that one in three fans knows how cameras work. One in three doesn’t know, and doesn’t even care, and the last one shifts between the two states in perpetual confusion.

Rueda is very sorry, but he no do the English interviewing. Much apologise.

Three minutes in, a mystery yellow flag blipped onto the screens, then disappeared as fast as it appeared.

It took a few minutes before we were shown why: Artigas forgot to turn through a turn, went dead straight into the gravel – without falling over – and stalled his bike.

Marshals came running and sent him and his turquoise kitty away to the back roads, where they struggled further to get the thing going.

He finally managed to get back to the pits, nearly running over a team member as he flitted around and between their trailers in order to get to the back door. Luckily these Moto3 bikes are tiny, so his fit into the back quite easily. No. No. Get your minds out of that gutter, you animals.

When the riders came ‘round to post their final times, the timing tower looked like a slot machine in full-tilt.

When it finally came to rest, Acosta had taken pole. His maiden pole, and basically the last To-Do thingy to tick off his list before graduating into Moto2. Suzuki took second, and Guevara nabbed the final front row spot.

Darryn was knocked all the way to sixteenth. Daz, you won in Spain last year, didn’t you? You can do it again. Please do it. We all want to see Rob & Don turn into beardless babies.

The intermediate class delivered, and it delivered properly!

Just before the first session kicked off, we saw a foot-immobilised, becrutched Ogura leisurely hanging around in the pits.

Shortly after the session kicked off, Baltus came back into the pits, having lost one of his three cylinders somewhere along his way around the warm-up lap. By the end of the session his search party had still not located the missing cylinder.

Aldeguer ran out of talent around Turn Three – and he has a lot of talent to go through before that happens. BUT. It is infant-talent; the kid is only sixteen. (This is a fact that befuddles me every time someone mentions it; he simply seems older.)

What happened through Turn Three was this: Young Fermín’s rear tyre was already playing hopscotch through Turn Two, and hadn’t quite settled out of its hopscotching when he tossed it into the third corner. The tyre was not impressed and turned up its friendly game from hopscotch to that of Death Wobble Doublet.

What followed was Fermín feverishly attempting to save it, failing, then flailing out of the turn like two arrows from a bow – one human-shaped, and one motorcycle-shaped.

Turn Five caught out Arenas later, and he got moody with the marshals for it.

Close to the end of the session, Garzó got hung up by a cruisin’ Arbolino. That was an undercut-pass simply screaming ‘Piss off! Idiota!’.

Did y’all hear Garzó’s chat with Simon? He could well have a career as Narrator to fall back on, seeing’s there’s no-go for Garzó in 2022 so far.

With less than four minutes left, championship-challenger Raúl did a Dumb. He plonked down around Turn Two, then waved his arm in frustration towards his fallen bike; although I’m sure it was more aimed at himself than his KTM.

Ramírez disappeared from the session in the last minute.

But the battle for the front row was taking up all the attention – with good reason. Thirty-four-year-old Italian Corsi was cruising towards his first pole since 2012.

There was a split-second of heartache when DiGi snatched top spot from Simone. But that was quickly reset when DiGi’s time was scrubbed for riding on the greens.

And so, on an eventful final qualifying day for the season, the Moto2 Elder indeed claimed pole. Regardless of the championship feud, everyone was pretty happy for the guy…

Apart from Raúl, it appeared. The youngen was sat in his pit box, big plumes of steam billowing from his neck and ears.

Not to be outdone by his fellow countryman, Vietti came in to claim his first front row start in Moto2 by taking second, and it was the Other Fernández who ended up in the third slot.

*Party tonight at the MV pits!

Pol was taken to Valencia Hospital after rattling his ribs in practice earlier in the morning; which meant he couldn’t do the qualifying-thing. Likely he won’t be doing the racing-thing, either.

It’s worth noting that Viñales was looking much cheerier than he’d been most of this year. Hopefully it stays that way, eh?

The first session kicked off with Márquez (Junior, of course, since brother Marc is still seeing double) performing a very unceremonious tip-over in Turn Two.

At the start of Q2, Rossi was having a Bagnaia-Tow when he very nearly pecked Pecco in the rear through Turn One. He managed to avoid it, but had to wait until the second bout of laps to get his tow back.

At first it seemed like Miller would finally get his pole… Until Pecco again nicked it from his teammate. It was of short duration however – Martín went full Martínator and steamrollered his way to the front.

While on a rebound-charge, Bagnaia’s Ducati faked a slide towards the side of the track, before elegantly twirling its way to the dead-centre of the track. Nine out of ten for that near-perfect spin.

Pecco was running around on-track, frantically waving his hands in an attempt to warn the oncoming riders that there was a slumbering Ducati dead-ahead. It must’ve worked – nobody tripped over it.

Not long after, his teammate also toppled out of his retaliating lap, when his Ducati fancied taking its rider for some cuddles in the Turn Eleven gravel pit. It is unclear whether Jack appreciated the gesture.

By the end of it all, we were treated to an all-Ducati front row, led by Martín on pole. Bagnaia got second spot, and Miller had to be content with third.

Not far behind them, Brad had fired his way into seventh. Can’t wait for tomorrow!

No, really. Tomorrow’s going to be the most memorable final round ever.