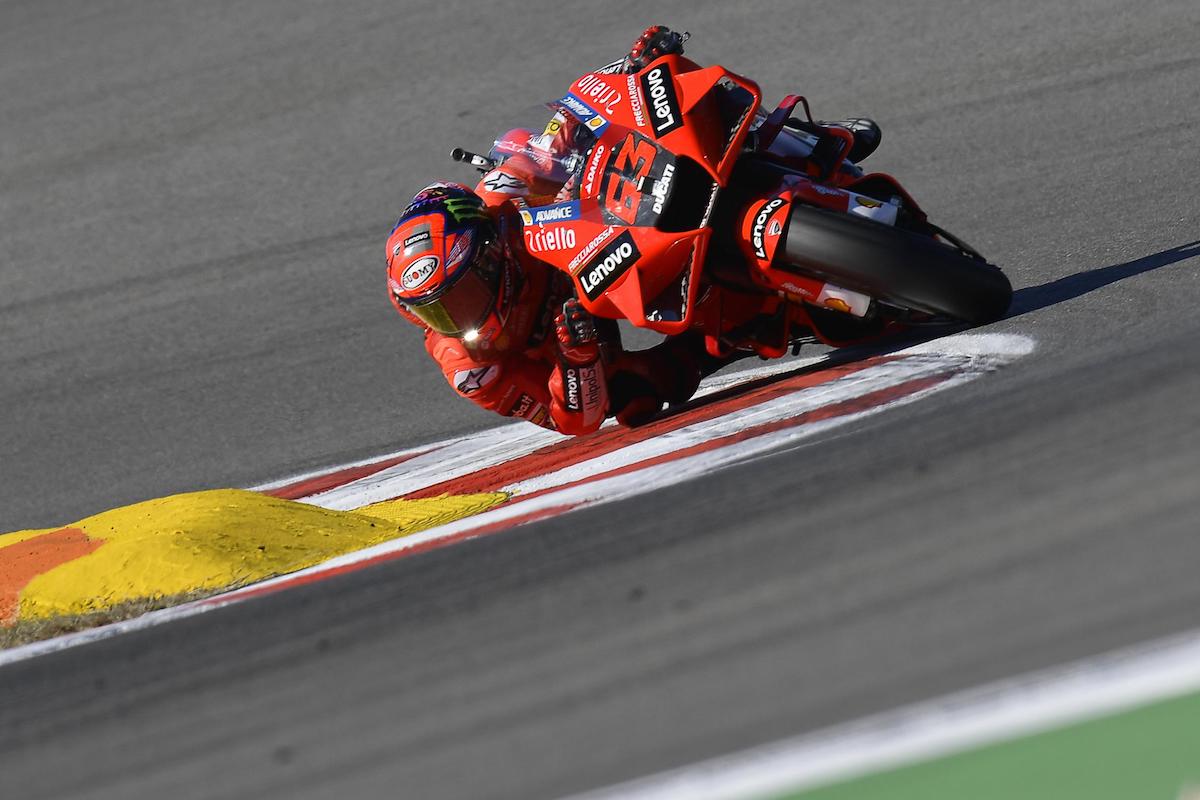 A glorious track to watch dozens of angry, fuel-fed hornets buzz after each other, the Algarve delivered – as it usually does – some splendid entertainment.

When I finally managed to watch the races without buffering every five seconds, that is. (Any suggestions on reliable Wifi around Middelburg, that’s affordable? I am straight up done with these okes’ sh*t.)

Let’s get into the carnage!

Arguably this weekend’s Moto3 race could be called the most intense race of the season. Nails were gnawed, hearts stopped… It was spectacular! Even uncle Simon Crafar agreed.

First, a few Long Lappers were dealt out to the Quali-Cruisers.

On the first turn of the first lap, Toba’s woeful weekend became even more so as he crashed out of last place. He was not seen again.

By Lap Three Acosta had ascended up into sixth – not long after that he was in the lead battle. From there the mayhem properly ensued…

Wingman Award goes to Artigas, who, in the first handful of Acosta Versus Foggia Battle-laps, acquitted himself perfectly of his task as moto-wingman.

There were a few corners where Acosta learnt that Darryn doesn’t know what brakes are. Daz: ‘Brakes? What are ‘brakes’?’

Lap Nine – Acosta finally broke into second place for the first time. It was ON like Donkey Kong!

A lap later he tried to slip past Foggia; and completely overshot his exit. Back to work, then.

Masiá and Darryn got friendlier than two dogs who’d not seen each other for a long time. And not in the friendliest manner, either.

It was entertaining to see Masiá not backing off from his Championship-aspiring teammate. That is, until he went past Acosta, then Foggia – and proceeded to nudge Dennis’ front wheel. That little manoeuvre allowed Acosta to barge into the lead.

Lap Fourteen, a mere lap since he’d snagged first, Acosta forgot one of the fundamental rules of racing: Don’t look over your shoulder! It’s common knowledge that it is bad juju.

He got reminded of that while he was dropping like he’d hit neutral instead of second.

Then Acosta managed to get back in front. It was nerve-wrecking stuff!

Masiá very unceremoniously bopped off of his wheels through Turn Five. He rapidly picked up his bike, hopping along awkwardly as he tried to both remount and push the bike at the same time.

Apparently, he had a sniff at Darryn and Migno’s rears. At least they didn’t crash.

Foggia got overtaken, Darryn was divebombing… and their paths crossed quite abruptly into the corner. Darryn bombed straight into Foggia, who went down hard. Garcia was scooped up for the off-track ride as well.

Foggia was absolutely shattered. The Italian all but broke down next to the track, but somehow managed to stay on his feet. He cried on the scooter-ride. He cried at the pits. There was no shame in it – I would’ve cried, too.

It was a sealed deal then – Pedro would become the new Moto3 World Champion the moment he crossed the finish line.

And moments later, he did, taking the race win and his Championship victory all in one. Migno came in second, and Antonelli was ‘Happy’ that he somehow landed in third.

His Championship-taking victory has made Acosta the first rookie to do so since Capirossi did it in 1990. Which is a million GP years ago.

Amidst the trackside celebrations, Acosta struggled to get into the violently orange ‘rookie’ bib they’d brought out for him, before going fishing for stonefish in the gravel pit… and catching a chest filled with gold, oddly shaped like a helmet.

Back in pit lane, Darryn made his way to Foggia’s box to apologise – as a gentlemanly racer does – and got chased off like a bad dog by the Italian’s team.

I get y’all are upset, but damn, it was racing; and he was there to apologise. It’s not like he was aiming for Foggia. Would’ve been kinda hard to miss him if you ask me… But what do I know, hey?

In the end, Darryn got disqualified from his fourth-place finish for ‘irresponsible riding’ – one last Race Direction Slammer before going on to GP?

A race where positions were mostly decided by poor tyre choices…

On the very first lap, Chantra bought his piece of Turn Thirteen.

The Sparky Award, as well as Most Spectacular Bludgeoning Award went to Arenas who got viciously removed from his seat on Lap Three. That was a proper tenderising; looked like gravity got dialled up to +3 especially for him.

On the next lap Ogura’s luck continued on its falling ways.

Lap Eight saw Raúl’s lead stretch to over a second for the first time. This set off Remy’s alarm clock – right, time to crack on!

Bezzecchi had a leather-soiling moment through Turn Fourteen.

Turn One tripped up Dixon on Lap Ten, as well as Vierge a lap later – Xavi’s bike pounded that gravel like a cheap hooker… What?

It took Gardner up to Lap Twelve to catch up his teammate a-la-rival. He was steaming up Raúl’s behind like a fevered bull.

One lap later he was past – and gone.

For a very long time it appeared the only bikes on track were two KTMs. Eight laps to go, they remembered that there were, in fact, other riders getting at it, too. But only for a moment.

Raúl was riding on a rear tyre which much more resembled a spaghetti mop than a racing tyre at that stage; kudos to the kid for keeping it on the track. One lap more and Lowes would’ve blown past him like a hungry hyena.

But lucky for Raúl, there wasn’t a twenty-fourth lap, and thus Lowes could not blow him off-track.

Gardner swept up the victory, Raúl held on to second, and Lowes stampeded into third.

The Moto2 Championship title moves on to the final round – albeit with Remy holding it in both hands; he only need lift it up.

Some dude by the name of Hamilton’s dad was stalking the GP pits – talking crazy shit like ‘…Lewis’ first choice was bikes…’ And ‘…I’d love to see him on a bike…’ Bloody psychopath.

Petrucci suffered a bout of painful déjà vu when he landed next to the track through Turn Four, on the opening lap.

Dare I say that Álex Márquez rode a brilliant race today? Because he did.

Lecuona decided he wanted to check out the sights beyond Turn One, then rejoined the race once he’d seen what there was to see.

The Elder Espargaró found himself skidding to a halt on his behind off of Turn One a lap later; he simply remained seated, contemplating his life. Or he was probably trying to figure out how his Aprilia had went faster horisontally, without him on it.

It looked like a torpedo skimming the surface of the ocean as it blurred past its forlorn rider.

All went non-crashy right up to Lap Twenty-One; first, Fabio pulled a Fabio-esque pass on Martín, who shook his head at the Frenchman.

Moments later we witnessed something new: Fabio had crashed out of a race! He slid across the tarmac, looking befuddledly back at the racing line. ‘Wait a minute; this is not the racing line, that’s the racing line. Why am I moving in the wrong direction… And where’d my bike go?!’

It was the newly-crowned Champion’s first crash out of a race for 2021; his maiden DNF for the season. Which also made it his first race sans any points.

Makes that pre-race infographic of him quite ironic. You bastards jinxed the guy!

But it was on Lap Twenty-Three where the true chaos hit.

Lecuona, having satisfied his sightseeing tendencies earlier in the race, was bombing down the inside of Oliveira when all went to heck. Iker’s tyres went ‘Nope’ and let go of the tarmac, which caused him to whack into Oliveira.

For a moment they appeared to be caught in freeze-frame; bikes locked together to create a giant KTM leg-clamp around Miguel’s left lower limb before both riders and their clattered machines were ejected out of the turn.

Oliveira was quickly loaded onto a stretcher; Lecuona did not qualify for the same treatment. (Don’t even – both riders turned out conscious and fine in the end.)

The red flags dropped; the race was over. The results at the end of Lap Twenty-Three were declared the final outcome of the race. This meant Pecco had taken the win, days ahead of Mir who was perfectly chuffed with second. Behind him Miller managed to take the third spot ahead of a very determined Márquez Junior.

Brad, who had managed to pass his two fellow KTM riders and was therefore clear of the ensuing carnage that followed, was awarded tenth.

Lecuona stayed with Oliveira post-crash, apologising for his bugger-up and checking that Miguel was alright. Which he generally was – he managed to tender-motion himself onto his feet. You just know he’s going to feel that in the morning.

Ducati celebrated hard since they now had the Constructor’s World Championship in hand, and Zarco’s garage celebrated as he was crowned the Best Independent Rider of 2021.

Congratulations to you all.

With that, the penultimate races of 2021’s MotoGP calendar are over. One more round to go. One champion still to be crowned.

And don’t forget: if you enjoy these skits of gleeful nonsense, gratuities via Patreon are always greatly appreciated.