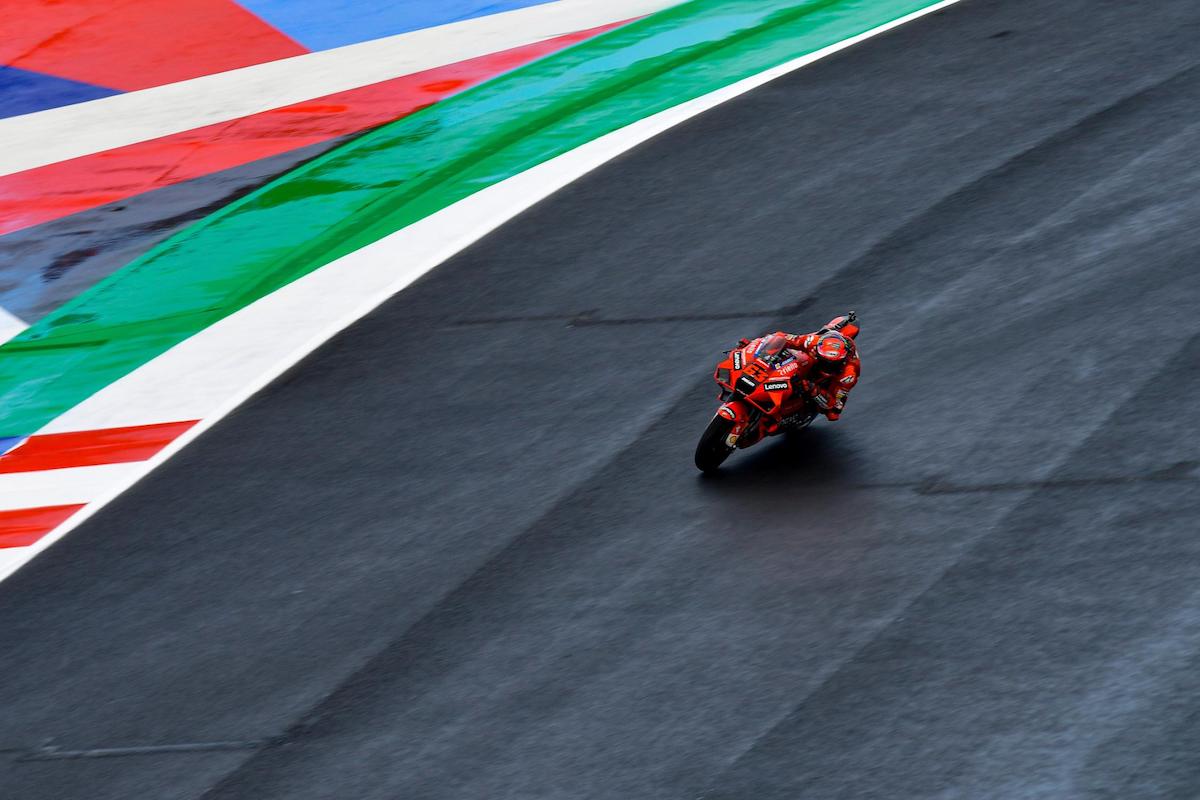 Before I even get into the chaos that was Qualifying today, allow me to congratulate Binder Junior on the officiating of his MotoGP contract for next year. Yes, there are many a sour face about this, but that simply means Mister Divebomb has a lot of work to do.
Work we’re all sure he can absolutely do. Go Daz!

Clammy – that’s what the track looked lilke. Although ‘clammy’ had always sounded rather ‘sticky’ to me, something the track was not so much.

In unusual fashion for the junior class, the first session went by mostly incident-free.

Five minutes to go, though, Suzuki decided to propose to his bike in Turn Four. It must’ve declined because he got up very quickly, and kinda dejectedly.

Alcoba did the Tortoise Slide off Turn Fifteen, transitioning into a ninja-jump onto his feet, whereafter he looked around fervently for someone to fight. Not finding anyone, he had to skulk off to fight with himself.

That was basically it for Q1. Let’s get to the sequel.

Sasaki’s bike flopped over while negating Turn Fourteen; someone must’ve tied Sasaki to his left footpeg, because he rode that bike all the way onto the side of the track, sideways, then picked it up – all while still straddling it.

There must’ve been some kind of Italian Booster Fuel in Antonelli’s chocolate milk this morning. The guy was untouchable.

Niccolò took pole effortlessly; he’ll be joined by a very happy Salač in the second spot, and the Other Rossi in third.

Darryn only managed to hook sixteenth. More riders to divebomb on the way to the front, yeah?

Alright, who did it? Who oiled up the track prior to the Moto2 lot’s first qualifying session? Or should I say the Last Man Standing session?

It was mayhem. Fair amounts of gravel were displaced within an exceptionally short time – roadbuilders around here don’t even move that much gravel in under fifteen minutes.

Roberts missed out on the action, having fractured his collarbone earlier.

Honourary mention to Bo Bendsneyder for his impeccable rodeo-skills-demonstration during practice.

But let’s get back to the Q1 consternation. It all started a mere four minutes into the session…

Bulega bought the first patch of land through Turn Sixteen.

Almost simultaneously, Bezzecchi’s bike Caspered into Turn Nine – One second bike was there, the next it was gone.

Turn Fifteen wanted in on the action, and stuck a leg out in front of Arbolino. His bike executed an impressive mid-air twirl before slamming into the wall, and going belly-up. It left a cheeky Dunlop smear across the Michelin advert board. Ten out of Ten for cheek.

Right after Arbolino, Schrötter took home some of Turn Six.

Marcon repeated the previous crashers’ performance, but through Turn Nine.

Next up was Baltus, who got laid down on his back quite violently, head bobbing like one of those dashboard-bobble-heads.

Victim Number Three for Turn Fifteen came in the shape of a Much Upset Corsi.

By the time we had seven minutes left, Casadei left the track at Turn Three. He managed to rejoin the session, only to improve his crash-score by going down again through Turn Fifteen. His poor bike reverse-somersaulted through the spray of pebbles (eight out of ten!) leaving it screenless in the dirt.

Turn Nine wanted a little more action, and got it thanks to Baldassarri. Sparky Award goes to you, sir.

In the midst of the mayhem, Navarro set a session-killing time – and got called into the pits. That was probably a good idea.

On to the second session – and for a while it seemed that it would be a little less chaotic than the first. A while, that is.

Six minutes on the clock, Vierge flipped out through Turn Fifteen – marshals scrambled to do their marshalling duties, not knowing that there was a murderous motorcycle heading their way…

Marshals marshalling had to scramble away from their marshalling when Dixon’s bike came flailing at them with all the murderous intent of a serial killer. Miraculously they all managed to avoid its fury. Headlines for local media: Murderous Motorcycle Nearly Flattens Marshals.

The teammate-duo’s synchronised crashing performance was on point, though. Ten out of Ten.

Vietti executed one of the neatest slo-mo-crash-into-cartwheel-dismounts I’ve ever seen. That deserved nine out of ten style points.

Turn Fifteen – what is up with Turn Fifteen?! – Ai Ogura sent his bike flying, and it in turn threw off its tail like a terrified lizard.

Ever witness delayed realisation? Watch Raúl’s Q2 crash replay. He rode that bike horisontally through Turn Two as if it wasn’t registering that he was no longer upright. Eventually it did register; mainly thanks to the constant scraping against the ground of areas that should not be scraping.

Qualifying fourteenth clearly upset Gardner; he fisted that tank so hard it had to leave a mark… That did not come out right at all. He hit the tank with his fist. Angrily. Yes; that sounds better.

Pole Number Seventeen in his Moto2 career earned Sam Lowes a new record for the most poles for a single rider in the middleweight class.

Having topped Q1, Navarro missed out by a pinch in Q2, but still held on to a respectable second place. Fernández – Augusto, not Full-o-Dust Raúl – will join them in the third front row slot.

Fabio in Q1? Incroyable! Surely he would bash his way into the second session. Right? RIGHT?

As it turned out, Quartararo fought a vicious battle to stay at the top of the timing tower – and was bludgeoned down from it. For the first time in 2021, Fabio would not be in the fight for the front row.

First to fall – literally – victim to the circuit in Q1, was our very own Brad. This meant that he was stuck in tenth for the session. That translates into twentieth overall, and a lot of overtaking work in the race tomorrow.

Up next was Pirro.

He was closely followed by Mir who exited from Turn Sixteen. It was an Up-Down, double burnout-tyre-smoking divorce from his Suzuki which projected Mir in a dead-straight line through the pebbles. You could’ve used him as a ruler through there.

Somewhere along the way Bastianini also decided to exit the track in a non-exiting zone.

Q2 came. It was strange not seeing the familiar Blue Bastard fighting it out for a front row slot this time.

Even worse it got for our favourite Frenchman: his lap eventually got cancelled which sent him two positions further from the front, into fifteenth.

Marc Márquez attempted a Bendsneyder through Turn Two, almost having a seat on his screen. The slo-mo replays were awesome. You almost want to imagine him mumbling ‘Wingardium Leviosa!’ as he lifted off from his seat.

Turn Eight caught out Martín. He managed to rejoin the session, only to improve his crash-score in Turn Sixteen.

We saw Jack’s motocrossing skills exercised through Turn Twelve and Thirteen. Nine out of ten for that performance.

Petrucci was shown wandering around Turn Six, looking rather lost.

The grass outside of Turn Five looked perfect for an impromptu picnic, and so Lecuona did just that.

By the end of the session, Marc ran out of Anti-Crash points, spilling it through Turn Six. The double fist flail indicated that he was not happy with this. At all.

Zarco’s Ducati went rogue through Turn Eight (or was it fourteen? Make up your minds, prompt-people). It fell over, ploughing the gravel with its rider before pinning him down in it. Zarco got violent with the pebbles; the pebbles did not lodge a complaint.

But it was Pecco once again who destroyed the session to take pole – his fourth on the trot.

Miller came stonking through to take second, and Marini snagged the third spot at the very last moment; he was so happy, you’d think he’d won the race.

So, it’s a Ducati Lockout on the front row…

If Fabio pulls out something insane tomorrow, he could have his championship in hand. But, as it were, things are far more in favour of the Championship Battle carrying over to the next round.

It’s going to be an epic Sunday.