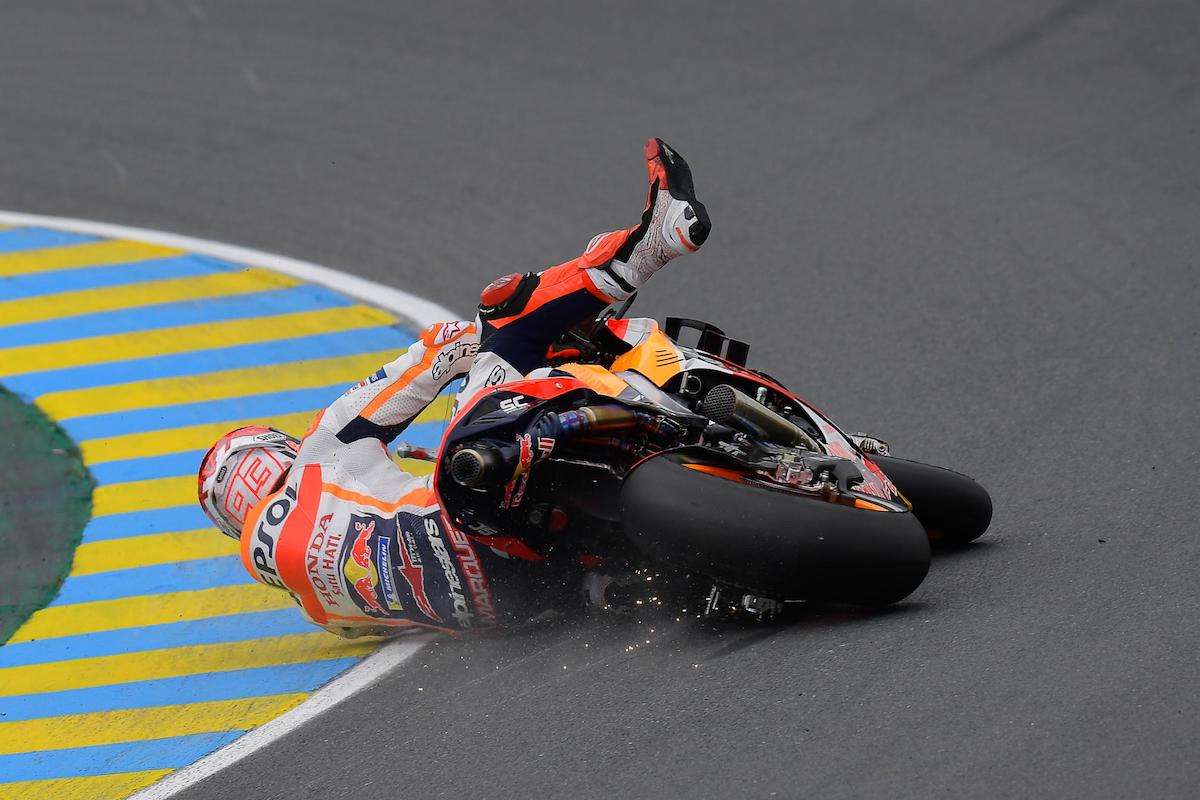 French weather is much like the French people: emotionally volatile.
Moto3, Moto2 and MotoGP qualifiers transpired in (relatively) dryish and at worst damp-wet conditions; but what is more appropriate than an absolute power-shower for MotoE?
Le Mans is gearing up to deliver a Total Mayhem race Sunday.

The first bombardment of qualifying started on a basically bone dry circuit. Artigas, having been roughed up some in practice, opted to sit it out.
All went peacefully, until the commentator’s newfound favourite boy racer had a disagreement with his KTM. Acosta’s ride wanted to dabble in some moto-drifting, but Pedro was having none of it. Sorry Marc, but the youngen’s stealing your Spanish limelight one ray at a time.
A short while later, Yuki’s ride nonchalantly chucked him off mid-chicane, leaving the Japanese rider in unconcealed agony. For a moment there he looked like a puppet with a few muddled strings.
By Q2 the weather began its moodswings, throwing down a gentle sprinkling of rain. Then stopped again. But it was just enough of the wetness on part of the circuit to kick off some excitement.
Swooping through Turn Twelve Riccardo Rossi’s rear (or, at least, his motorcycle’s) tripped up the front of Antonelli – sending both Italians scrunching through the gravel.
More rain; all the bikes Return To Nest. Chaotic mechanic work ensued. Sky-water stopped, again. But now the tarmac was (more) partially wet.
Salač got launched into the lower stratosphere by a bucking motorcycle… again. For the most part, you don’t want to feature in my writings so often, if you didn’t know…
Out of nowhere Rossi recovered to temporarily take pole, but Migno was like ‘LOL, nope.’ And took it right back.
With that, Andrea Migno will take off in pole position, with Riccardo Rossi in second and Jaume Masiá in third.

By the time the Moto2 okes got their turn, the darkening clouds were hanging mockingly overhead. Regardless, Q1 kicked off on a dry tarsnake, with very little incidents.
Ramírez did decide to go butt-sliding at the last moment – I give that Vertical Upside-Down Bike Skid a seven and a half out of ten.
Q2 began dry; no, damp. No, no; it was wet… Or was it dry? Confusedness…
The first to highside-slide was Ogura. After which he commenced a Run-no-wait-Bikes-coming, Run-wait-no-more-Bikes ballet. Which was delightfully amusing.
Schrötter’s post-slideout footage was equally amusing, showing just how short the German rider is.
And then, with five minutes left, someone sprayed Spray ‘n’ Cook on the track – riders were dropping like drunken flies. Navarro even managed to lose it while almost completely upright.
In a nailbiter last minute rush, Raúl Fernández took pole, Bezzecchi slotting into second and Joe Roberts taking a well-deserved third spot.

Q1 kicked off, as commented, ‘damp’.
Savadori took a spill, and we were treated to a short sprint race to and then up pitlane. Great form, Savva! Usain would be impressed.
There was a moment where Márquez – Álex, not Marc – looked as though he’d cleaned it up some. Then he went gravel-raking again.
Aleix Espargaró learned the bitter lesson of Premature Celebration. Don’t ever sacrifice that final flying lap; you will regret it.
Brad isn’t having the hottest weekend; weather wise nobody is. But racewise Brad’s been having a hard time. Let’s see what our boy does tomorrow.
There has to be some kind of reward for doing a sprint race, in full riding gear, through pitlane, and then finishing at the top of the list. Savadori earned that reward.
Cue Q2 and the Return of the Márquez. Say what you will of the guy, he absolutely bossed through that session.
If I had ten bucks for every time that commentator would’ve eaten his desk, I’d have a herd a couple thousand strong…
There is something exquisitely erotic about that warm-the-rubber-weave. Just me? Oh. Okay. Don’t mind my strange fixations.
Rossi was looking pretty damn good again. Until he went ploughing the lands with a GP bike. GP bikes don’t make great ploughs, Doc!
The commentators were reminded of the perils of premature celebration when Marc blipped pole with about three minutes left, Honda locking out the front row at the same time. They got so excited, in fact, that they missed the fact that Oliveira had crashed.
Guys, you should know better…
At first it looked like Pol would be the one to kick the Hondas in the behind, but then he decided to play moto-bowling. That wins the bike-skipping award for the weekend. Best Dust Cloud, too.
It started with Viñales slamming pole from Marc. But hot damn, Fabio! That’s what you call an ass-whoopin’ final flyer.
Once again, Fabio shows his fabulousness by taking pole, followed by Viñales and Jack Miller rounding off the front row.

The French weather has a sense of humour.
We are taught from a wee age that water and electricity are two things that do not go together… French Weather: ‘Right, let me throw down rain by the tipper-truckful on the start of MotoE qualifying. It is hilarious, yes?’
This week’s MotoE qualifying transpired much differently from the previous Superpole setup. It was much the same as the other classes’, with one exception: riders were limited to six laps; these included out- as well as inlaps.
Back to the weather and its humour. The minutes before the siren signalled the start, it was raining, but rideable. By the time they were let onto the track, it was a mini-monsoon. Red Flag went up faster than the torque on those supertoasters. Only one rider made it out onto the actual track, in fact, before the red was waved. The Energicas looked like speedboats cutting through the water; the mere fact that everyone made it back to the pits intact was a soaking miracle.
The weather cleared up greatly within minutes, and if the e-bikes looked like speedboats, the safety car looked like a cruise ship doing lap after lap while ‘assessing the track conditions’. Marshalls were shown boating in pit lane with their broom-oars. Crows bathed on the trackside grass.
It was a Quite Wet restart some minutes later. I felt the frost building in my limbs simply watching this session.
First to go down was Tulovic. And to no surprise – at Turn Three. Soon after, Hernández went off-track horizontally. He showed no restraint in his physical display of frustration, either.
At around the same time Granado’s bike violently tossed him into the air through the chicane; regardless he tried to remount – mid-track. That didn’t look awfully safe.
These Energica Corsas are violent creatures – Casadei’s ride bucked him off in spectacular fashion, whacking him in the leg for good measure. There was limping. Much ouch.
In conclusion…
Tomorrow’s races will be anybody’s race – and I mean all four classes.
Turn Three is a cunt.
And Le Mans gravel traps are Bloody Deep.
With the temperamental French weather it will be an interesting race day. Excellent!
~ Karr