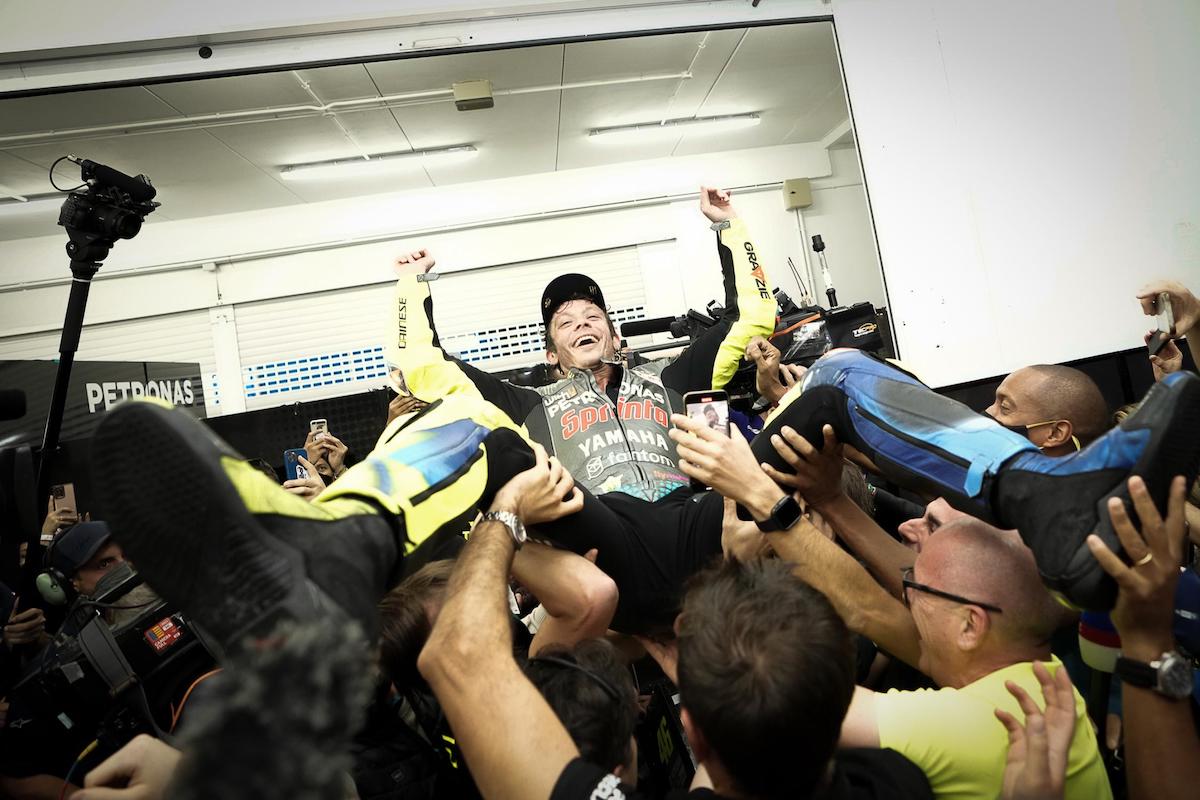 They claim that this circuit is a one-liner, that overtaking is near-impossible in difficulty.

Tell that to the riders!

Sunshine was ordered for the duration of the day, there were blue skies and happy kids running around barefoot… At least, one assumes there were.

Controversy, paint-swapping and chaos – just another day in Moto3 racing, then.

The first lap had hardly begun when riders went flying. First to highside it was Fellon, whose bike was so upset at him that it headslammed him on their way off-track.

Almost immediately after him Darryn’s Honda catapulted him into the lower stratosphere. He landed amidst the stampede – and somehow avoided becoming Mufasa. Hard luck Daz; look on the bright side. You’re seventh in the championship! And MotoGP, baby!

Yamanaka very suddenly was left with nowhere to go but into Masiá’s rear end, when Jaume threw anchors in an attempt to avoid the carnage ahead of him. He succeeded, unlike Yamanaka.

Five laps into the race, Kelso had his highside-turn; his landing was softened by falling on top of Rueda. Both riders were ejected from the track, their bikes a proper tangle. Rueda was up first, lifting his arms in exasperation as if to say ‘WTF man?’ Somehow one suspects that Kelso did not even notice this, as he was getting up in slo-mo from underneath the bike pile.

On Lap Eleven Kunii tried out for moto-breakdancing. Leg up, bike down. Five out of ten.

Masiá rubbed up on Salač on Lap Fourteen, in the madness that was the lead race battle.

It was not the greatest of returns for Öncü; he was slammed with a Long Lap Penalty, but he knew that it was coming the moment he exceeded those track limits again.

García plunged down the inside of his teammate Guevara, proper shunting him out of the way.

When Masiá went for his Long Lap, he was at least not alone – Salač was sent to join him by Race Direction.

Lap Eighteen saw Suzuki arrow it straight out of Turn One; definitely deserves the Sparky Award for that elbow-drag. He stood in the gravel, dusting himself off while looking crestfallen.

Surra’s front wheel appeared to insta-teleport from underneath him through Turn Two, Leaving him very abruptly horisontal.

The final lap was intense. Making a hot pass through Turn Two, Foggia came out wide – and took out Acosta’s front end. Acosta was not impressed. Did anyone see Foggia attempt to apologise after the race? Anyone? Hmmm…

Foggia collected an immense three-second penalty post-race for his blunder. Christian to Simon: ‘…was nothing…’ ‘…racing incident…’

A little ways further around the track, Migno made an exit through Turn Six.

With the carnage behind them, Artigas took the victory, García took second and Masiá – coming from twenty-third on the grid – got third.

Artigas was hopping-over-the-line-happy; rightfully so, as this was his first-ever win in Moto3. He even had a quick sparring match with the barriers in Parc Fermé. Just checking their structural rigidity, right Xavi?

And would you look at that: An all-Spanish podium trio, in Spain, on the last race for the 2021 season.

On we went to the intermediate class – and some more mayhem. Because why should the final races be boring?

The Moto2 Championship was the only one still left undecided. Raúl had a slither of a chance to nick it from Gardner; those Aussies definitely had no more nails (or fingers) left to chew. It was a silent evening Down Under as the race ensued…

The lights went out; the race kicked off. It took all of two turns for everything to derail like the Blue Train did recently.

At first it looked like only Vierge had ejected from the race; but very soon it became clear that much more had transpired. It was such a chaotic game of moto-skittles combined with a dash of Dodg’em that no matter which camera they replayed from, it looked the same: riders, bikes, bits of stuff flew everywhere, skittered over the track, were left in jumbled confusion. And one of the bikes involved pissed itself.

Which brought out a red flag. Because oily pee-streaked race tracks aren’t great for having races on; unless it’s a race to see who stays upright the longest.

Luckily all three the not-so-lucky riders who had gone sprawling all over the place – Vierge, Baldassarri and Bezzecchi – managed to get up, and get their bikes back into the pits by varied means of propulsion.

Clean-up on Aisle – uh, Turn – Two! Bring on the Extra Large microfibres. All of them.

Vierge, upon returning to the safety of his pit box, grabbed the compressor nozzle and began blowing away the dust and pebbles he’d collected in the tumble.

The Leafblowers & Sweepers’ modern dance group’s performance scores a solid ten out of ten from me.

Everyone back to your original grid positions! Bez, you’d better hurry up…
Bezzecchi’s team were working at light-speed to get his bike dressed in time for the fast start… But it was being a difficult lady, and so they missed the pit-opening. Thankfully they managed to get it into its fairing in time to start the Warm-Up lap from pitlane. This meant Bez would be able to join the race – but at the back of the grid.

Tragedy struck our pole man Corsi; he had his arm up from the moment they pulled off for the warm-up. At the end of the lap he peeled into the pits, whacking his bike’s screen and cursing its forefathers. It seemed like his bike’s nervous system had short-circuited somewhere, which meant it was race done, season done for the Italian veteran.

Racing (re)commenced. For a while it was Fernández versus Fernández at the front. That’s not the first time we’ve seen that, was it?

On Lap Three wildcard Pratama had one of the most impressive almost-crash-saved-it-sorta moments of the weekend. His bike bucked, suddenly and with great fervour, after which he somehow managed not to fall over and adapted his forced new trajectory towards the edge of the tyre wall. He was shown sat flat on the ground against the wall, in obvious pain. You could just picture all the guys watching at the time flinching and reaching for their nether regions in collective sympathy…

Garzó made an untimely exit around Turn Six.

The Final Lap arrived – Wayne Gardner’s breath departed. Heck, everyone in that garage’s breaths buggered off along with his.

Raúl took the last win for 2021, ahead of Di Giannantonio in second and the Other Fernández in third. But it was all about the man in tenth: Remy came past that checkered flag with his head bowed down, emotions finally let off their leash.

He’d done it. The Aussie bastard had done it! Gardner was officially the Moto2 World Champion for 2021. This makes him and dad Wayne only the second father-son duo to have both won premier class championships.

Remy was overwhelmed – by emotion as well as the myriad congratulations alongside the track. Back in Parc Fermé he could barely hold an interview. The podium trio were about as relevant as an ice machine in the Antarctic.
Congratulations Remy. There is not a sober person anywhere in Australia this evening; and Monday’ll probably be announced a public recovery… er, holiday.

This was it. Rossi’s final race. Ever. It was the last time we would see the Rossi Wedgie Grab as he exited the pits. It was also the last race of the season.

Not a Repsol to be seen – for the first time since they infiltrated the sport in ’95, Repsol Honda didn’t have a bike on the grid. ‘Tis a year for firsts, indeed.

Brad was up to fifth on the opening lap, ran wide, and got stuck in eighth for a while.

On Lap Five a giant dust storm picked up outside of Turn Six. It was Nakagami and his Upside-Down Flying Bike.

Rins, Rins! He was looking stellar in third, going around the track for the eleventh time, keeping the Ducatis humble… Then he tossed his bike into the distance. Again. Rins attacked the pebbles where he came to a halt, as though they were the ones that had tripped him up.

No, Álex, you tripped over your own wheels. This is becoming a habit – Rins Bins! You know you do it way too often when they give it a personalised name.

It was Bagnaia who led a trio of Ducatis over the finish line. The two following him were the Remarkable Rookie Martín in second, and his forever-bridesmaid Miller in third.

That was the first Ducati podium-lockout in, forever.

But all this was of little interest amongst the teary-eyed, shouting, yellow-clad masses who were all celebrating Valentino’s tenth-place finish to his final MotoGP race ever.

All the riders joined in on the mass-hugging just outside of Turn Two. Messages from Important People were played. Turn Two reportedly will now be known as Vale Valley. Indeed, whether you love him, or hate him, there won’t be another quite like Valentino Rossi. The Doctor has fulfilled his prescription:
GP starts: 432
Wins: 115
Podiums: 235
Poles: 65
Championships: 9

Not forgetting our local boykie! Brad finished the race in seventh; and with that he took sixth place in the championship. Sixth!

Truly a year of many firsts! And a few lasts. What will 2022 bring?