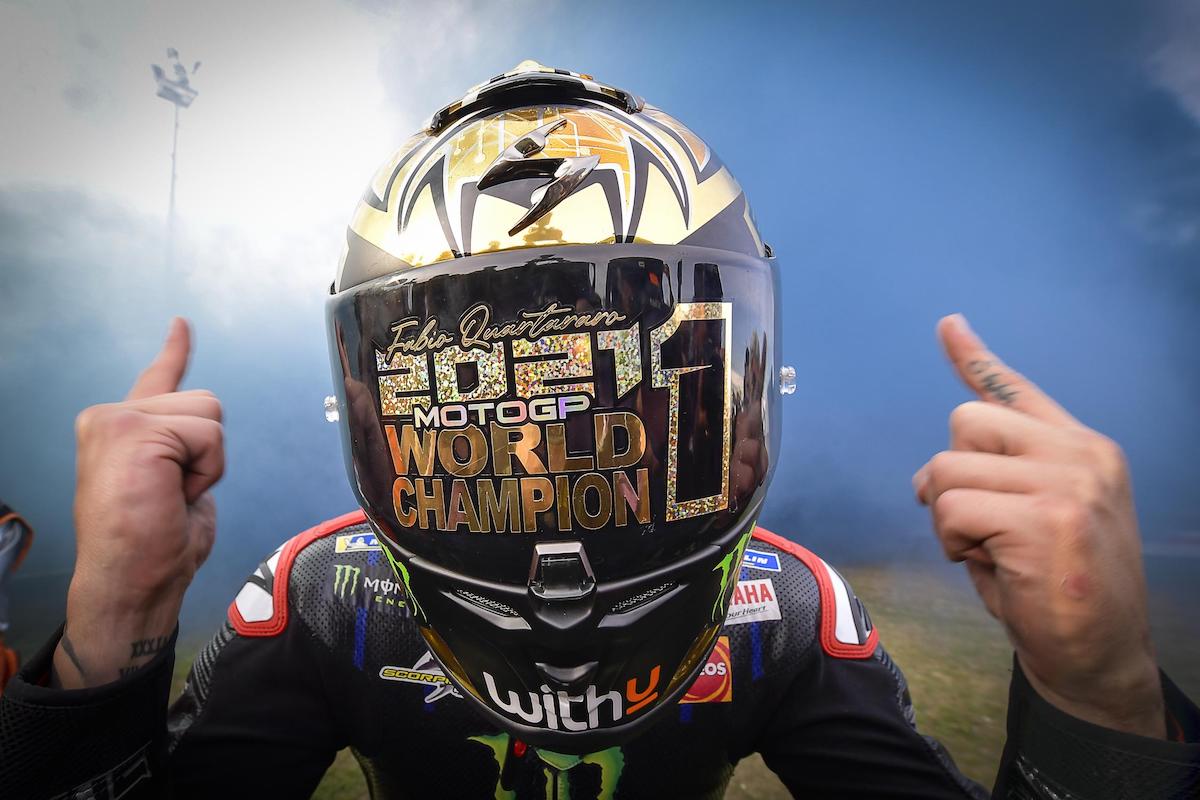 Buckle up, buttercup. This is going to be a long one.

The Misanoean weather gods decided to cut everyone some slack today, packing away the clouds and rain in favour of some nice, chilly autumnal sunshine.

Would the Rookie Sensation Acosta take the championship? Or would Foggia stick a leg out to take the fight to Portimão? Stay tuned for another episode of Days of Our Moto3 Races!

By the second lap of the race, Darryn had leapt up into eighth. Our boy was on a warpath!

On Lap Six Rossi tried to shoulder McPhee’s bike out of his way, very nearly getting his arm rear-clamped in the Scot’s wheel. McPhee carried on, leaving Rossi to eat the sparks thrown at him by a very unhappy motorcycle. Satisfied with its spark-showering, said bike promptly curled up for a nap in the middle of the track. Sparky Award awarded.

Three laps later, McPhee had an encounter with Turn One, which had him walking back to the pits.

Suzuki’s bike shed its rider in favour of a career in stripping – needs some work; don’t quit your day job, little Honda.

We saw Darryn hop into second on Lap Twelve. Just for a moment, it was. But by Lap Fifteen he was back in third, and all the way to the final lap, everyone had their breaths held in expectation of a podium finish.

With nine laps left on the clock, Foggia had wrestled himself into the lead.

Guevara demonstrated the High-Speed Remount after losing it in Turn Eight – six out of ten for the demo; points deducted for rejoining the racing line in a questionable way.

By the end of it all, Foggia took the victory, followed by Masiá in second. Championship leader Pedro did a decent salvage job to end up in third.

Foggia celebrated by puffing out a tiny burnout which transitioned quite smoothly into a wheelie.

Now we ask: Will Pedro wrap up the championship in the next round, or will Foggia Fog-off once again, leaving the young Spaniard with a little more work to do?

At least the team championship has been settled – Aki must be chuffed. Well done to his KTM team for taking the 2021 Team Championship.

Anyone who claims that Moto2 was boring this weekend, need to be sent for a few medical probings.

Before we get into the madness, let’s talk about the eye-catching (read: blinding) Rossi tribute colours that the VR46 boys donned for the race. They took Hi-Viz to an entirely new level of VISIBLE.

Long Lap Penalties were bestowed on a handful of riders, including Augusto for cruisin’ in front of Canet during qualifying, causing his fellow Spanish rider much anger.

Insult to injury came to Corsi when he was handed his Long Lap Reward for crashing under a yellow flag.

Marcon had to start from pit lane. Dixon also scored a Long Lapper. All round fun and games!

Very early on, Canet got intimate with Navarro. Thankfully, both managed to stay upright.

On Lap Seven Gardner pulled an overly aggressive block-pass on Chantra, knocking him off his wheels – and off-track. Judging by his hand-signs, Chantra was bestowing upon the Aussie the strongest Thai insults he could think of.

Garzó claimed his ninth DNF for the season when he decided to go camping on Turn Fifteen.

On the same lap, Raúl managed to barge his way into the lead…

But it was on Lap Fifteen when all hell broke out. No sooner was Gardner slammed with a Long Lap Penalty for what he’d done to Chantra, than we saw shards of KTM flying through the air.

Storming into Turn Eight, Raúl’s front wheel went donkey and locked up in a puff of smoke. It was Lock-Smoke-Down for the race leader. Both rider and bike went tumbling at a million kilometres an hour through the gravel.

The bike all but disintegrated upon re-entry from its momentary space-orbit. They’ll be picking bits-o-KTM out of that gravel for months…

Raúl’s tumble-dryer experience was a shining tribute to proper riding gear – honestly, the way he’d come down on his head not once, but at least three times, his neck should’ve been history. Had it not been for the gear, he would’ve been Raúl Mince: A-Grade Spanish Racer Meat.

Instead, he got to steam train back to the pits and watch the remainder of the race with a pained face; not even a hairline scratch could be detected on him. Bloody hell.

Possibly being blinded by his own motorcycle, Bezzecchi tumbled off on Lap Twenty-Four.

After having lots of Moments throughout the race, Lowes clenched victory. His teammate Augusto snatched second from Canet mere moments before crossing the line. A Very Pissed Canet had to make do with third.

Apparently, he was running on fumes for the last bit of the lap. He was fuming. Hehe. ‘Fuming’. He was shown trundling off to Parc Fermé on foot, a little thundercloud blitzing away above his head.

The Moto2 Championship battle is far from over.

There is so much to cover in the premier class that I fear I might miss something. Television dramas have nothing on it. Would Fabio beat the odds and claim the championship? Would Pecco fend him off successfully again?

Marini was doused in the same luminous highlighter-yellow ‘Gracie Vale’ paint scheme as his Moto2 compatriots. I don’t entirely hate it.

Brad had a whoopsie on his outlap, which earned him a back-of-the-grid-start.

Worst Weekend Award has to go to Mir; after numerous crashes on Saturday, he managed to get himself a Double Long Lap Penalty for jumping the start – that is not the correct way to make up positions, Joan.

That, however, mattered very little. Because on the third lap he managed to get it wrong, taking birthday boy Petrucci along with him on a skiing trip into the gravel.

Joan quickly went and gave Petrucci a big hug, apologising for taking him out on his birthday – in the wrong manner.

Miller was being the definition of the perfect wingman – until he became one of Turn Fifteen’s plethora of victims. Lots of elbow-sparks. GP Sparky Award goes to the Australian.

After Miller’s untimely departure, it became a Pecco vs Marc race. And remained so for most of the distance…

On Lap Nine Nakagami went for a quick sight-seeing trip, and rejoined the race.

By the tenth lap Brad had swept his way into twelfth. Fabio was up into ninth.

Something Important stopped working on the Junior Márquez’s bike, which forced him to pull off on Lap Eleven.

Turn One claimed Lecuona on the same lap.

Have you ever seen a bike attempt solo-offroading? Martín’s Duc felt it could. It left Jorge face down in the dirt in order to try out for the Bike Solo Offroading Championships. Good try, especially where it picked itself up from the gravel.

Adding to his long list of Reasons This Was A Shitty Weekend, Brad was handed a Long Lap Penalty for touching too much green paint.

When Quartararo managed to force his way up to fifth, everyone settled down, accepting that that would be the best he could possibly manage.

It was through that very corner, four laps later, that we saw a Ducati turn into a high-velocity projectile – Pecco had crashed from the lead!

After a few rough landings, Bagnaia got on all fours, slamming the dirt with his fist. Tardozzi collapsed. Yamaha’s entire pit crew went into math overdrive.

All Fabio had to do now to claim the title, was cruise it to the finish line.

Amongst the confusion, Oliveira also vanished from the top of the timing tower. Suddenly, Fabio found himself in third!

He was well on his way to celebrating his Champion-status from the podium – but Bastianini (on his ancient Ducati) had other plans. He went full send past the Frenchman, unashamedly sitting him up in order to take the third place.

Meanwhile, having witnessed both Ducatis fall victim to Turn Fifteen ahead of him, Marc was sailing gleefully towards victory.

Marc did win the race, followed by his teammate Pol in second – his first podium for the year. In third came Bastianini with much delight.

In a great show of tenacity, Brad managed to claw his way through every obstacle to end up eleventh. Rossi had snatched tenth from him on the last lap. We’ll give him that – it was his home Grand Prix Finale, after all. Just in case you didn’t notice.

But the podium trio were all but forgotten as Fabio was announced the official MotoGP World Champion for 2021. Not only that, but the first ever Champion to hail from France. Needless to say, he was ecstatic.

Celebrations erupted all around the circuit – blue to the one side, yellow to the other. Quartararo balling his eyes out in front of giant screens showing his MotoGP journey, and Rossi tossing his one-off helmet into the yellow masses. Possibly his gloves, too.

There was a moment where it looked like all the emotion was too much for Rossi’s bike, when it began puffing smoke from places it shouldn’t.

Fabio removed his golden helmet from a smoky perspex box; Awkward Dancing commenced. We suspect a lot more of that will be happening throughout tonight – likely into the early morning hours, too.

He did a burnout and some crowdsurfing when he finally managed to get his ass in Parc Fermé; and could hardly speak when uncle Simon interviewed him. Mom and Dad were there to congratulate their Superstar Son. Even Pecco came out to give his main rival a congratulatory greeting. It was all so heart-warming… I need a drink. BrB.

Okay. With the top Championship all tied up, we still have the other two classes – both of which are promising to leave us nailless by the end of the season.

Which is in a mere two rounds.