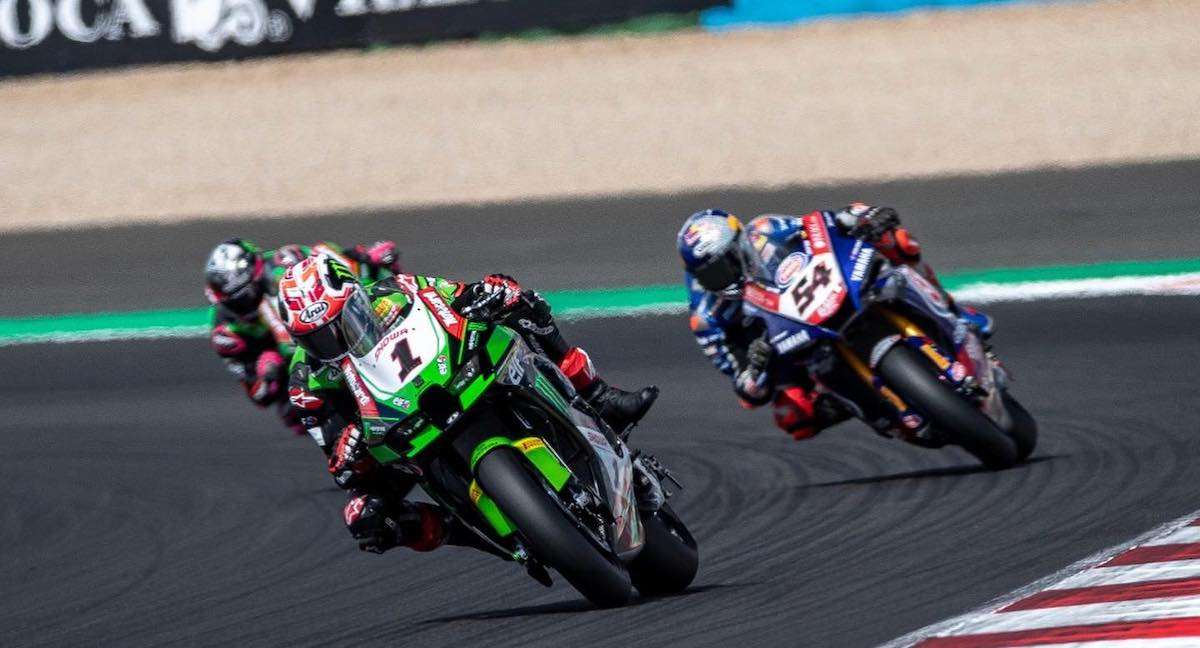 Alright. Who was juggling spanners over the works, and dropping them in one at a time?

Today’s Superpole race was insane! And nobody crashed.

Race barely underway, we saw Viñales retiring into the pits. The gremlins have returned for Sunday, it seems…

Close racing all through the pack, but at the front a two-way war was waged for the length of the race. Razzgalileo got the cut on Rea very early, but Rea was having none of that ‘sonra görüşürüz’ this time.

There was a near miss from Rea at Turn Five at one point; wrong kinda contact that, Jonathan.

Oh, but that final lap! Entering the Imola chicane, Rea yelled ‘Surprise!’ and bolted through on Toprak’s inside. Toprak said ‘Fair game, but…’ and three turns from the finish he ‘dosered his way back past Rea.

Toprak at the top again then, with Rea in second (Or so we thought…). His teammate Lowes nabbed a deserved third.

On the cooldown, Toprak got a rib-nudge from Rea when he nearly drifted into his rival; he was so enthralled in waving at the fans that he’d not noticed the guy next to him. C’mon, that was funny!

Update: A later judgement found that Toprak had exceeded track limits on the last lap and the win went to Rea

Having been left for last today, the SSP300 boys came out to play.
Lol, I’m a poet.

Berta Viñales on the grid, with a message to his Mama: roughly translated: ‘Congratulations Mom! I love you very much!’. Awwwwwww!

Two riders relegated to a pitlane start; Négrier for irresponsible Race One riding, and Sabatucci for some engine regulations infringing.

Oh good, the first lap went cleanly… Oh wait. Nevermind. Khouri went sliding. Much upsetness. That prancy run down towards his bike, though.

Stange fell over on the second lap, and executed a very animated up-jump and remount. Ten out of ten for energy.

Woes continue for the Kawikamis as Meikon retired to the pits on Lap Three.

Turn Thirteen proved to be a malicious turn; as Gaggi found out on Lap Three. His bike shook him off like a dog post-bath, then tried to realise its dream of becoming a spaceship. It failed.

With nine laps on the clock, the lead battle was anyone’s to win.

Poor De Cancellis; his bike ripped its chain off, resulting in its rider raising his hands in a gesture which undoubtedly translated into whatever ‘What the… SERIOUSLY?’ is in French.

Hold up! Pause! That yellow truck in the background; is that an ice cream truck?

Five laps from the finish there was a huge freight train at the front. Pérez (Selfa) left the track, possibly due to those (mostly dormant today) mechanical gremlins.

Pérez (Gonzalez) attempted to drift through the final turn, and failed. What he did manage to do was kick up an impressive dust cloud.

Somewhat over-eager, Sofuoğlu clipped the rear wheel of Booth-Amos, which sent the Turk flailing off of the track. By some miracle Booth-Amos managed to keep racing as if nothing had happened.

Turn Five saw the other Kawakami brother fall from the six-way lead battle.
With adrenaline levels everywhere at critical levels, it was Huertas who took the win from Booth-Amos, who had to settle for second; Buis managed to rake in third.

Ho-leee crap! Racing doesn’t get much better than what we got treated to in the SSP class.

Falcone and Debise, following their untimely tango yesterday, were both declared unfit for the Sunday race. Big Word injuries. Same went for Fabrizio.

Oh good! A clean sighting lap. Little did we know…

Fast forward to the final turn of the first lap and chaos erupted! Red flag, you say? Again? Oh boy.

Bernardi was a tiny bit too aggressive through the final chicane and tripped himself up. Aegerter and Cluzel went tumbling over the downed bike and rider.

After scoring a high-speed ambulance ride, we were informed that Bernardi had sustained a back injury. Cluzel, who’d joined him on the amby ride, sustained a head injury. No bloody wonder, seeing’s he got smacked in the head by a wheel.

Aegerter rode off from the incident, right leg cocked like a territorial doggo in order to avoid a very uprighted exhaust. Somehow, he managed to pop that pipe backwards along the way, and made it to the pits where his Ten Kate team went about fixing his ride in light-speed.

Mechanic teams are so underrated. Do they do cars, too? Asking for me. Because, with less than thirty seconds to pitlane closing time, they had Aegerter on the bike and out of there.

Some duct tape was noted on the tail of Aegerter’s bike – this simply proves that duct tape is essentially a fix-all. Even world-class racing teams know this.

No more grid-incidents, at least. But not long into the new race Orradre got lost in a gravel-dust trap.

Bloody hell, what did Gonzalez drink in that clean-up break? That was some aggressive racing!

The final two laps were front-of-field mayhem. There were two pit garages filled with very nervous teams who’d most definitely forgotten to breathe.
Gonzalez rammed past Aegerter, but Aegerter returned the favour on the last lap. Then it was Gonzalez ahead; then Aegerter again. Glorious, glorious racing!

Finally – and by that time there must’ve been a few team members in each of those pits on the floor, passed out – Gonzalez made the final move, claiming his very first SSP class win with much happiness.

Aegerter graciously accepted his second place, still chuffed enough to string out a few fancy wheelie-stunts on his cooldown run.

But behind them, and possibly unfairly overlooked, Öncü took third after defending his podium finish like a champ.

Gonzalez did the cloud-maker. Awesomeness.

Odendaal had a bit of a hard time, but managed to take sixth place.

Can Razergoatliquorice make it a trio of triumphs at Magny-Cours? Well…

Early on, Toprak did a stoppie-defence maneuvre against Rea. How. The. Hell.

Lowes was left on his butt next to the track, his ride having left him for greener pastures.

Rea-Toprak-Toprak-Rea… That battle lasted much longer this time ‘round, and it was splendid.

A very secondhand remnant of a motorcycle was pushed off of the track – Haslam has had more bad luck.

Amidst a heated battle, Van der Mark and Locatelli sideswiped each other through the start/finish straight; Van der Mark tested the reflexes of the pitboard-holders, and declared them Heel Goed, since he didn’t manage to collect even one.

Around the sixth lap there was a rather aggressive attempt by Toprak which saw him and Rea leaning on each other’s shoulders. Rea wasn’t going to give the lead to Toprak that easily, and neither was Toprak going to give it to Rea without a brawl.

War raged on at the front, with another proper fight going on back between fourth, fifth and sixth placed Locatelli, Davies and Van der Mark.

On Lap Ten Toprak crashed through the – basically closed – door next to Rea; Rea wasn’t having any of it, and returned the favour through Imola. Again.
The very next lap there was some more rubbing between Rea and Toprak. This time, however, Toprak stayed ahead. And kept it that way.

Rea overshot his overtake on Lap Fifteen, and that was basically the end of the Front Fight, because by Lap Eighteen Toprak had a whole second lead on Rea.

By the time they started the second-to-last lap, Toprak was two miles away; clearly he’d decided that playtime was over. Bye!

Toprak crossed the checkered flag almost three seconds before Rea, on one wheel. Again! With that, he managed to make it a rare Tri-Win Weekend.

Later, during the SSP300 race:
Race Direction: No, he did not! He exceeded track limits on the final lap of the Superpole race, and therefore we shall demote his ass one position. This means Rea gets the SPRC win. Geez; it sure took you long enough to realise that…

Boy, I wish I could hear that cooldown-lap convo between Toprak and Rea. It looked (happily) spirited.

So, with Razzy taking the victory spoils once more, Rea had to settle for the bridesmaid’s spot in second. Redding, after a much better performance than we’d seen in the previous races over the weekend, managed to hook third.