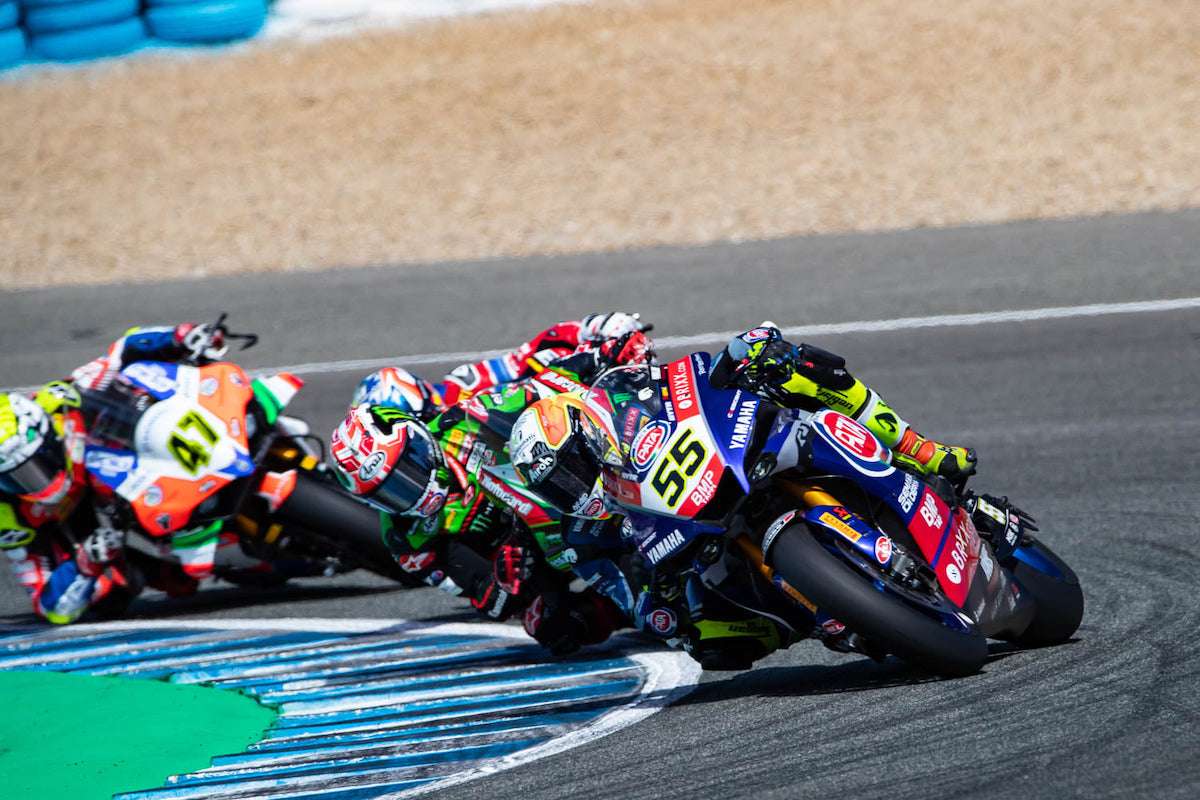 It was stupid hot… And it was pretty warm at Jerez, too.

Due to yesterday’s mayhem, the Superpole Race made way for Race One of the SBK class.

It was Rea versus Toprak from lift-off. And for a while it looked as though Rea was holding the winning hand.

Rinaldi’s Ducati had some kind of seizure through Turn Three. It violently slammed down on its side before rolling over in the dirt… and playing dead.

A lap later, a sad Cavalieri walked away from a crash, too.

I was musing over what’d happen if the two front-runners crashed out, and then it nearly happened. Toprak launched a very enthusiastic attack on Rea, front wheel measured itself against back wheel, and somehow neither of them ate pebbles.

This did, however, momentarily turn their couple-fight into a foursome.

Eight laps from the finish, Mercado’s bike went on strike. It must be a member of our local refuse removal lot, who’d been on surprise strike all week.

With seven laps to go, Toprak pounced. This time they didn’t almost-crash, and he got past Rea. For good.

Baz executed a beautiful pass on Van der Mark, but did you see the size of Van der Mark’s flame? His BMW turned full flamethrower in disdain for the overtaking rider; a performance worth nine out of ten.

Razgotabeatu claimed his first race victory on this circuit, Rea had to be happy with second, and Redding executed a last-lap sting to claim third place.

The junior class were the last to go on track. By that time sh*t was melting in the heat…

Romero got sent to pit-corner for removing his restrictor. He was joined by Steeman who had exceeded his engine allocation.

Alvaro Díaz got a Long Lap Penalty for riding like a moron under the red flag yesterday.

As I’d expected, a few riders elected not to race today. Márquez, Frappola, Gonzalez and Palazzi were missing from the starting grid.

So. Will Huertas take the Championship? Take Two.

The race had hardly gained momentum, when Coppola stopped to shout at the gravel angrily.

On the second lap Huertas made a detour through Turn Six… And did it again on Lap Four. By then he’d dropped back into the shadows of the racing pack.

Did I not mention Turn Six about a million times already? Regardless, through Turn Six Díaz apparently assisted Huertas in his flying-aspirations. He went vertical so high, he almost hit the news ‘copter before sprawling onto the gravel. There, a Very Much Upset Di Sora (who was in front of the championship-aspirant) stormed towards him, hurtling what I could only imagine were very spicy French insults.

To be fair, it wasn’t Huertas’ fault – and post-race that was confirmed when Race Direction fully disqualified Díaz. Ride like a nonce, get penalised like a boss.

One could imagine Di Sora watching the replays, going to Huertas to apologise for the onslaught, taking his insults back and proceeding to hand them over to Díaz.

Around Turn Thirteen Buis felt like giving himself a Long Lap Penalty.

By this time, Sofuoğlu was so far ahead, you’d have been excused if you forgot he was even there.

Except for Ton Kawakami, that is, who went to pebble beach through the final corner.

Sofuoğlu cruised past the checkered flag, taking the win. There happened a photo-finish behind the Turk; initially it was Okaya who managed to pip second from Buis, who was then placed third.

But wait! There’s more! The penalties came flying in – Okaya, Buis and Gennai were all penalised one position for touching the Forbidden Green Paint on the final lap.

What did that mean? It meant Iglesias was promoted to second, Okaya was now third and Buis was no longer on the podium.

They brought out the Dean-tributes as soon as the race was concluded. Bugger off! I was not crying!

You leave a big void in the 300 paddock, little Viñales. Have fun up on that racetrack in the sky.

After returning to the WSBK arena this year, Michel Fabrizio has announced that he will not be racing this Sunday, in a show of respect to the passing of Dean Viñales. He has also stated that he will be retiring (for good, this time). He had some strong views on the Junior classes, but we shan’t get into them here.

There was only one SSP race this weekend.

Lots of fall-and-rejoiners. Vugrinec did it first; Montella and Hendra Pratama followed suit.

Aegerter had managed to pull out a gap of over six seconds by Lap Eleven. By the pre-ultimate lap he was ten years ahead.

A hot battle between Manzi and Krummenacher ended when Krummenacher ran out of fight and headed for the kitty litter – at speed. Dusty Award goes to you.

Aegerter crossed the line eons ahead of Oettl, taking his tenth SSP victory.

Oettl came past as well, claiming second (and not sounding as happy as he should be with it). Tuuli stomped through the field to take third.

After a promising start, Odendaal had a bit of a struggle, finally taking eighth.

Lowes said: “Right, I have proven I’m a Hard Bastard; I’ll sit this one out.”

A very dainty slide executed by Mercado out of Turn Six. (The hell is up with Turn Six?)

On Lap Four Nozane did the awkward dinosaur jog through the gravel to rejoin his fallen ride.

Turn One claimed Cresson on the next go-around.

On Lap Seven Bassani knocked on Rea’s back(door), and got a dirty glance.

With five laps left, Redding caught up with Toprak; one lap later, he booted his way through to lead. But the Raz wasn’t having it. By the next lap, he managed to return the favour to Redding. It was an epic scrap.

Post-scrap, Toprak took his second win for the weekend, his tenth win so far.

Redding happily took his second, and Bautista was as happy with another podium spot in third.

Next weekend’s going to be another doozy – don’t forget to send the snacks this time.