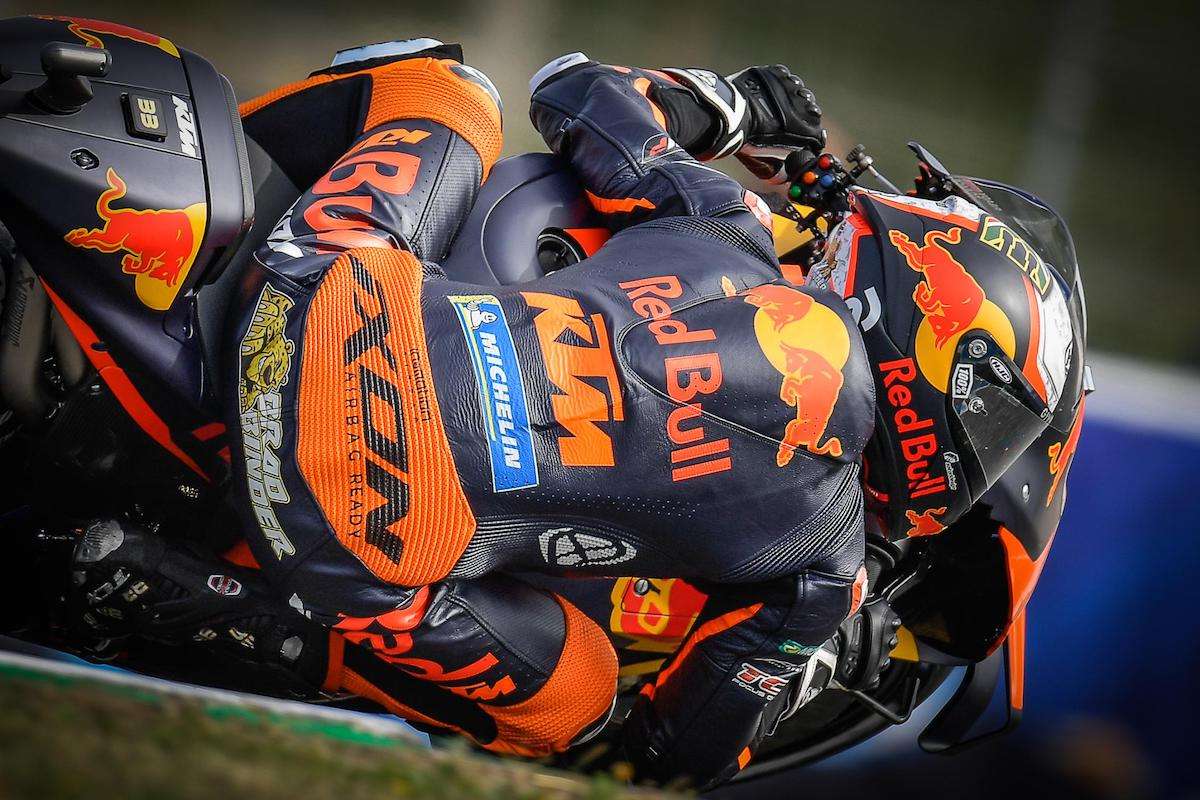 Rejoice! It is GP time again! Let’s have a look at the qualifiers.
There weren’t many smashy, crashy, slidy moments in MotoGP… Right, that’s it for the roundup then, see you tomorrow…
Oh alright! I’ll amuse you lot. Thankfully Moto3 and 2 came through with some quality content for this summation.

Q1 consisted largely of commentary debate around the teen wonder Pedro Acosta. As they blabbered, the same Pedro had a few heart-knotting moments until he eventually sat up, looked back, and seemingly asked the rear tyre ‘Qué carajo?’.
Let’s give it to Darryn – he does everything full-throttle. When his ride very suddenly decided it was now a wild stallion and whipped him off violently, he turned into a Binder-rock skipping over a gravel-pool. All you saw was lanky limbs and golden hair whirling about. Darryn then proceeded to get up, glance at his fallen steed as if to say ‘see how that worked out for you?’ and walk away like he hadn’t just played a game of jumble-tumble. That’s going to hurt in the morning.
Tissot have failed again to give every pit an accurate timekeeping device. Nearly half of the field went out far too late to get a final flyer in.
So Suzuki (the rider, not the motorcycle) took pole, followed by Alcoba with a brilliant last lap, and Migno rounding off the front row.

Moto2 delivered some more crashtainment.
Montella was the first to cut a trench in the gravel. Such form! Such precision! His execution of the butt-pirouette was flawless. And in true Italian form, he put on an operatic show – arms thrown at the sky, falling to his knees and bowing down in despair… Possibility of some yelling inside that helmet is high.
Manzi suspectedly caught a small bout of Cockiness, which cost him his pass to Q2. He tried to talk it away with tales of ‘tyre conservation’, and never really cleared up the mystery of him sitting out so early. If being pissed at yourself could be measured through tone of voice, he’d score a nine out of ten in that post-race chat.
Onto Q2 and we have another Canet moment – his motorcycle apparently decided it didn’t want to go any further around the turn, and simply skidded out from under him. The onboard footage was golden: Canet looking through the turn, focussed wholly on where he wanted to be, and whomp! Bike go slidey. He also seemingly forgot how to pick up a bike in the gravel for a moment. It was funny as hell. Bless all these cameras.
He managed to jog – bike and all – back to the pits and rejoined the session.
But Joe Roberts takes the Stylin’ Slide trophy with a knee-slide that would make an ice-dancer jealous. Such balance, much style! He, too, made it back out in time for a final flying lap.
Lowes turned on the GoGo button; perhaps a little too much. On his second-to-last lap he was flying; flying so hard he hit some turbulence in the final corner, which cost him his pole-worthy lap time. This caused some inner demon frustration, and finally, his talent hit its limiter – leading to an embarrassing slide out of pole-contention.
Rounding off the Moto2 sliders was Arenas whose bike executed a perfect sparkle-twirl leaving the track.
After all of this, Gardner took pole, followed by Di Giannantonio in second and finally Bezzecchi in third.

Marc Márquez may not have his full Mojo packed in yet, BUT…
You can’t help but wonder if the nasty down he had in practice earlier didn’t play some role – psychologically, as well as physically. MotoGP riders are not as human as you and I, but there remains a little humanness deep inside of them.
That said, he offed Q1 in insanely good shape. For a while, the Old Marquez shone through. Make no mistake – he was pushing harder than ever.
Brad kicked Q1’s arse. With Márquez – Marc, not Álex – constantly towing along behind him, using Brad as his marker. Rossi finished somewhere in the middle.
Fabio showed again why he is Fabulous, absolutely flying through Q2 to take pole. Morbidelli followed suit, destroying the session to finish in second. The front row was finished off with Jack Miller in third.
Splendid Qualifying sessions; nobody contended for the Crash Trophies – suppose I’ll pack them away for next time.
Bring on Sunday; it’s going to be a stunner!