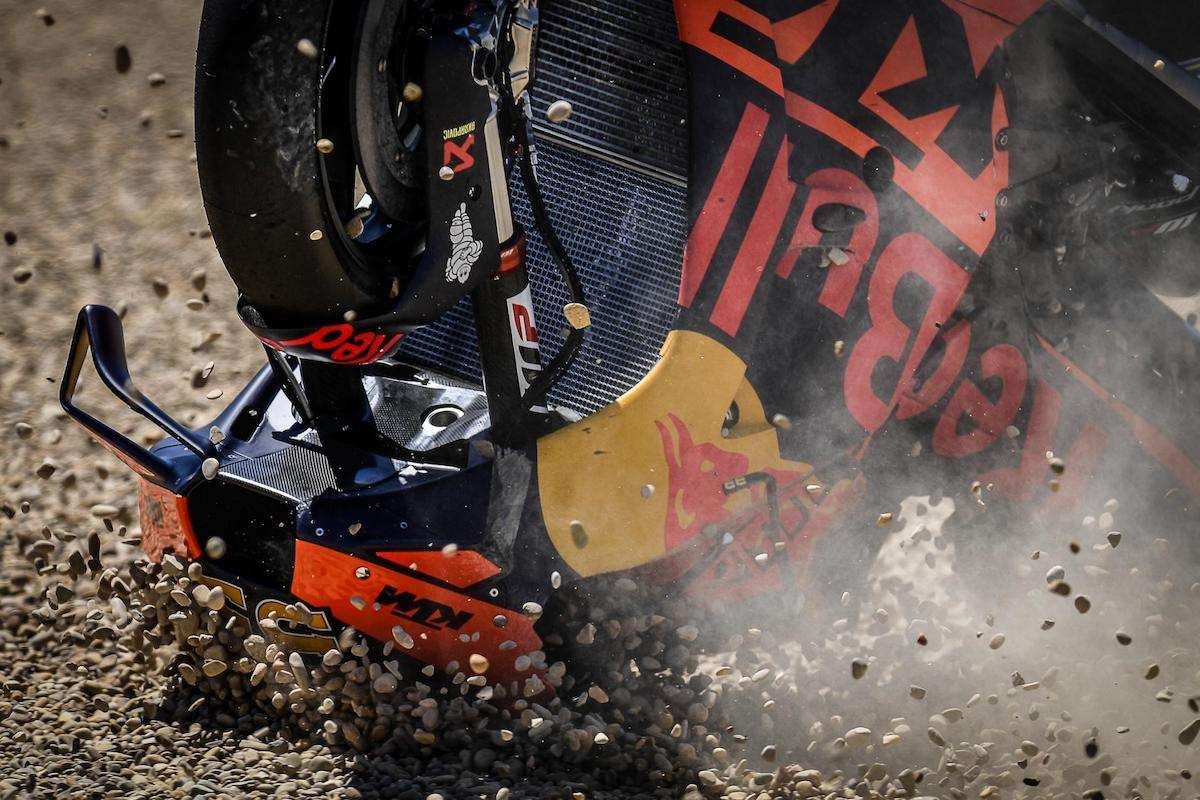 Karr gives us another lighter-side look at the world of MotoGP, this time from the Spanish round at Jerez

The Threes delivered tight, hot, heart-racing entertainment. It was delightful.
McPhee went Mcflying – again. It was Turn Seven’s rumble strips versus moto-racer-behind – that arse is going to be a little tender. A tender reminder of how McCrappy the season is going for him.
A few laps on, Rodrigo was in perfect form, leading the race… But Turn Seven had other plans. Flying into the corner, his machine did a front-tuck-rear-slide before ejecting the poor rider straight up skyward, like a Gabriel rocket launch. That landing was a mere few degrees from catastrophic injury. Luckily, the Argentinian was shown limping off-circuit and not on a stretcher; although he was sent to the human-mechanic, just to make sure.
Bud, you may have an angel’s name, but. That. Does. Not. Mean. You. Can. Fly!
Sometimes, contact is a blessing. Just ask Migno who, after losing the front end, got whacked upright by Sasaki. Good one Sasaki, for staying on your wheels. Migno looked as if someone hit the ejector seat button, being lifted from his seat so high the impact of touchdown had to be manly painful.
Deniz, Deniz, Deniz… He was looking spectacular for most of the race, until Acosta kicked him (figuratively) one last time in the final lap. He pushed through the last lap in a desperate attempt to catch the Spanish Wonderboy. Alas, playing Moto-Bowling in the final corners does not do you any good. It seemed that Acosta’s absolutely perfect execution of the turn blinded Öncü, sending him straight into Masia and headbutting Darryn on the way out, too. So much for “Relax”. All three managed to finish the race, albeit in stone last.
Someone investigate what Acosta adds to his porridge in the mornings – I want some of that Voodoo. First rider ever to take podiums in his first four races. Most of which are victories. This is beyond physics. We demand answers.
Has Spain been breeding riders in top secret bunkers, fed on race fuel, breathing exhaust fumes, and learning their ABC’s via GP terminologies? Oh, wait…
Stating the obvious, Acosta took the victory. After Öncü’s unwelcome game of Last Corner Bowling Fenati came through in second and Alcoba grabbed third.

If Turn Seven had it in for the Moto3 guys, it was Turn Six tripping the Moto2 riders. Early on Augusto Fernández went sliding out on Six; Bulega thought he looked a little lonely and decided to join him. Garzó also went sliding there a few laps later.
The trophy for Synchronised Barrel Rolls goes to Chantra and his Honda. But a victory in Barrelling came at a price – he was shown limping away in obvious pain.
Fabio was churning out consistent laps so consistently that one had to wonder if there was a glitch in the Matrix. He ran such an excellent race I’m inclined to name him Winner of the Day.
Ever see a bike undress itself? Corsi’s MV was so pissed at them crashing that it tore off its cloak mid-flight, tossing it aside in dying disgust.
So in Moto2 it was DiGi (I refuse to struggle with this surname every single Roundup) on the top step, joined by Bezzecchi on the second step, and Sam Lowes pinching third.

Bloody hell, Brad. This was a forgettable weekend for our local star, crashing not once, but twice before calling it a day. Up and on to the next one.
It looked like another Fabulous Fabio race early on, the gap between him and second going up to around a comfortable one point five seconds for a moment… But very suddenly – with eleven laps to go – it appeared the Frenchman had hit reverse. Everyone speculated about the cause as he plummeted down the list, from concerns over a mechanical fault to suspected overcooked tyres.
Post-race however, it became clear that the guy was in extreme physical pain – his old nemesis Arm Pump had resurfaced to deny him another runaway victory. He still managed to finish in thirteenth; GP riders are Terminators.
That’s it; I’m calling it. Álex Márquez is going for Most Number of Crashes, isn’t he? He dug a perfect line through the gravel using his bike as a plough.
Not long after Brad’s initial spill, Rins ran out of luck and got rinsed off the track – he even had one of his wings clipped. Unlike Brad, though, he didn’t do a duo and managed to finish the race.
The Aussies are going to be insufferable this week. Give it to Miller, once Fabio dropped off the face of MotoEarth, he ran a stupendous race. Well done. Not a sober Australian at work on Monday. Or Tuesday. Heck, they might as well give them the week off.
There isn’t going to be enough Prosecco in all of Italy for the celebrations at the Ducati team – taking first as well as second today. They’ll have to resort to some Lambrusco, or one of the other Italian fancy-drinks.
Miller kills it to take first, followed by Bagnaia in second to make up the Ducati one-two punch, and Morbidelli grabs third. Technically, that makes it an Italian One-Two-Three…
Marc finished in a decent ninth and refrained from crashing again. I reserve commentary on Rossi.

Hah! You thought that was it? Let me introduce to you the MotoE Roundup segment.
This weekend was the first round of MotoE for 2021, and I figured it couldn’t hurt to check it out… It didn’t hurt to check it out.
Being my virgin viewing of the electric class, I had a lot to take in. What takes the most getting used to is the noise – not so much the jet-like wailing as the fact that you could hear the tyre squeal. Constantly. What is great about the class is that, for the most part, everyone’s on identical machines.
It’s a fast race, these high-velocity toasters running out of shock-juice after eight laps, but it was entertaining no less.
The field was made up of fifty percent rookies, fifty percent return pilots. There’s even a female rider in the lineup in the form of María Herrera.
Right, on to the actual race. It only took five corners for Zannoni and Perolari to pick up a small scrap and go sliding. Zannoni managed to rejoin but finished stone last.
Not long after, Tulovic got his nose clipped by Aldeguer which sent them both sprawling off the track. Tulovic was Not Impressed, judging by the way he physically displayed a deep wish to slap Aldeguer off his feet. Fortunately, he contained his boiling German blood; walking off in apparent pain.
Disaster struck the race leader Granado with five laps left to go when he had a little slide… in Turn Six. Turn Six is a c*nt. He did rejoin, finishing in thirteenth place; definitely not what he’d planned for the day.
Moments later Xavier Cardelús was seen jetting through the gravel in a most spectacular way. He wins the MotoE Impressive Slide award.
Aegerter, after taking second, almost had a Mister Bean moment – very nearly running into the barriers. It was amusing.
Zaccone rode a brilliant race, taking the first win of the MotoE season. Aegerter took a close, hard-run second, and Torres rounded up third.
‘Twas a Sunday filled with glorious racing action. Onward to Le Mans!