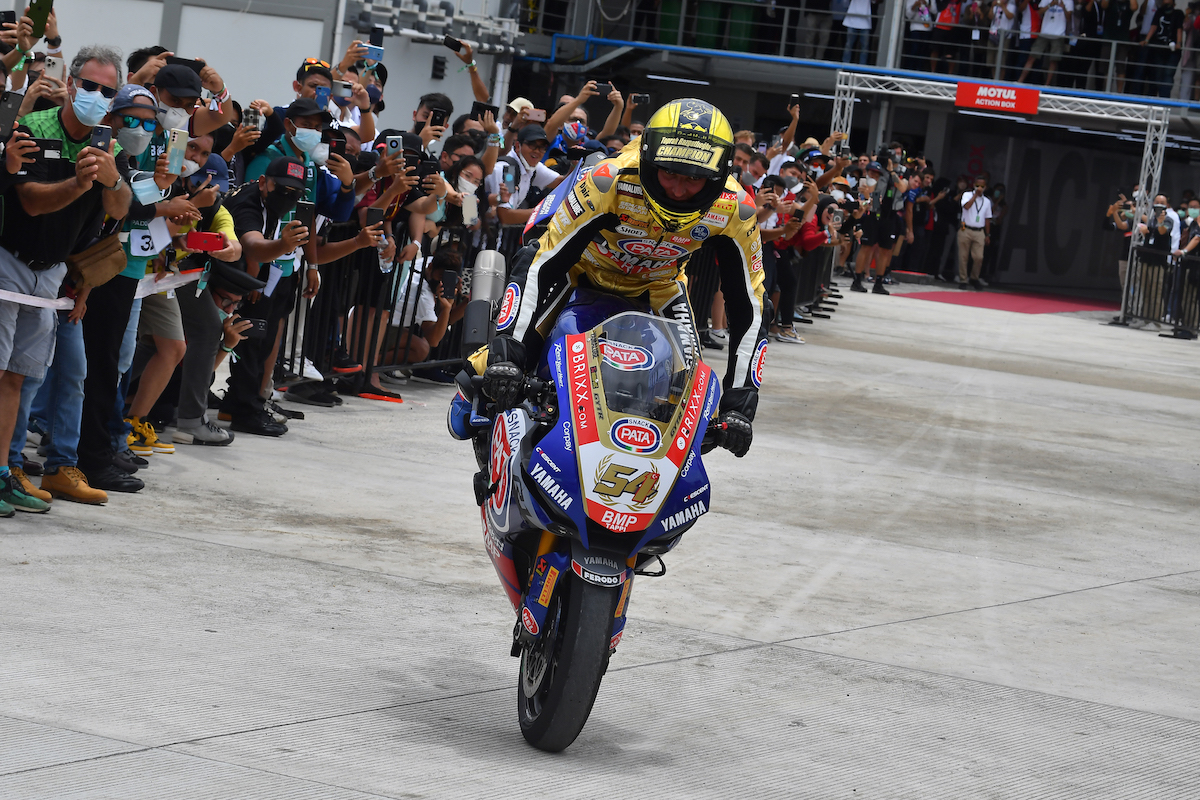 The final race day for 2021. It has arrived; why’d it have to arrive so early, though?

More rain, a champion crowned. We say goodbye to one of the best seasons in WorldSBK in spectacular (soaked) fashion!

Saturday’s Race One was rescheduled on Sunday at the cost of the Superpole race. It was worth it.

The sprinklers were turned on a few minutes before race start – another delay was called. Oh boy…

Five minutes past the initial race start time, the riders were released for a Sighting Lap to check out the drops of water. Upon their return to the grid everyone had five minutes to change tyres; some opted to do so, some didn’t.
Toprak had a squiggly scare at the start of said Sighting Lap.

They were off. The race kicked off hot ‘n’ heavy; and didn’t cool down once. It was top-end entertainment!

On the second lap newby König went ploughing out grass, presumably in order to plant some flowers. Or veggies.

Bassani ate his Fast Flakes with extra sugar this morning. He even bullied his way past the championship duellists to lead the race on Lap Five; for a few seconds.

We lost Rabat somewhere along the way.

Six laps to go, Ponsson bought a piece of Indonesia in Turn One.

After some intense, rubbing-racing-mayhem, Rea managed to take the race win – on the twenty-first different track. Unfortunately, he was not destined to claim his seventh championship.

That was because Razzleyfloggio finished in second place – with that, claiming the ultimate victory. The youngest Superbike World Champion has been crowned: Toprak Razgatlıoğlu is your new Champion.

Rea was the first to congratulate the new champ, waiting for him after crossing the line in order to give him a big ol’ hug.

A pop-up changing room appeared on the track; Toprak eventually emerged from it clad in golden leathers and a dazzling golden helmet. It looked good; he should keep that colour scheme for next year.

Out of the changing room, onto his bike – which had also gained a new gilded nose piece – and straight into a Stoprak Stoppie. There happened some rolling burnouts through pitlane, and yet another little stoppie just short of Parc Fermé.

Needless to say, the young Turk was word-stumped. ‘I’m tired.’ He eventually added to his interview, apparently having a hard time stringing two words together.

Congratulations are in order! Don’t celebrate too hard, kid; there’s still another race to be had later.

The middleweights went out with a bang!

Gonzalez (Moto2 bound Manuel, that is) had stuck a note to his helmet, thanking everyone in the SSP world for everything.

Failed inconspicuousy: The cameraman ‘filming the front row’ – we all know he was really following the lovely lady in her short, flitting dress. Top marks for trying.

Bergman sat this one out, with his knackered left leg ‘functionally impaired’.

The race started off with the rain singing ‘Should I stay or should I go?’. In the end it decided on ‘go’. Mostly.

Lap Two – Thank You Note Gonzalez made a premature exit, at full speed, into the gravel. His bike continued on for a short length of solo gravel-reverse-riding before coming to a rough standstill. Manuel was kneeling over on all fours… er, threes?… nursing his right arm. Not the ideal exit from one championship to another.

Buis was dealt a Double Long Lap Penalty for being just a little too eager to start racing.

Somewhere along the line Valle joined the Retirement Group.

Five laps from the finish, Van Straalen’s bike turned into a diesel, smoking its way out of the race.

On the same lap Odendaal’s bike tossed him off, flipped him the bird, and went on without him. It kept going until it found a patch of nice, green, moist grass to roll over in. There it laid itself down, blissfully unconcerned with what it had done.

It was an epic battle all race long, but that final lap takes the trophy for the most entertaining, jaw-clenching lap in a long time! The throng at the front all had each other by the coattails, one heart-stopping overtake after the other. How nobody got taken out is a complete mystery.

And that kept going right up to the line. It was brilliant!

The checkered flag dropped; from thirteenth on the grid Cluzel hit the asphalt sprinting to take the victory. Right behind him (okay, technically some ways to his left, too) Tuuli barged through to take second place; Aegerter ended up in third.

Post-race, Aegerter showed us how not to do a burnout; Cluzel showed him how to do it correctly.

I was a little disappointed that Toprak wasn’t in his new golden leathers for Race Two.

Riders lined up on a rainy grid… Déjà vu hit. Every time they switched to the front-of-grid camera the screen got whiter, and the sight got lesser.

At the last minute the Delayed board popped out, and everyone made their way back to their pits. Again. If Toprak wasn’t calmly sidling back today, one could’ve confused it with Saturday’s foiled race start.

Indonesian fans are hardcore bastards. Monsoon rain? Pfff. What of it?

Rinaldi in shorts, cheerily sweeping water from his pit box, is a whole vibe.

The rain let off… But only a teeny bit. The Safety Car fancied some powerboating. That’s a lot of water. Yikes.

Cameras caught kids being kids in rain conditions next to the track. Immense urge to do the same tugged at brain.

Even the leafblowers were harnessed in the fight against The Wetness. Their partners, the brooms, eventually joined in, too.

Lots of talking happened. Everyone waited; anxious to get going.

Finally it was announced that there will be a Quick Starting, twelve lap Race Two with pit lane opening at 10:30 (or 16:30 Indonesian time).

Calling it a wet race would’ve been an understatement. Very few crashy things happened, which was surprising. Massive kudos to the designers behind this track, though – drainage capabilities were on par with a tarmac-sieve.

The battle(s) at the front were bloody epic.

Fast forward to the final turn of Lap Five; for a few seconds the front lot looked like Jo’burg taxis during rush hour. Inevitably there was going to be a casualty. Bassani got pipped by Van der Mark, sending the Italian flailing through the gravel, him and his bike executing perfectly synchronised side-spins. Nine out of ten for the performance.

Understandably, Bassani was not happy; made clear by the choice of finger he raised to Van der Mark, while getting up.

At the start of the final lap Redding pushed Turbo Boost, blasting past Rea. That triggered an intense last lap scrap between the two.

Rinaldi prematurely ended his race while navigating around the last lap.

Rea made it two-for-two in Indonesia when he took the win ahead of Redding. Some time behind them, Van der Mark was able to keep Razzledygobgloo at bay, and claimed the last podium spot for 2021.

On his cooldown lap, Rea stopped, some shenaniganry happening around his bike… He emerged from the group, no longer sporting the ‘Number 1’ plate; instead, he had reclaimed his good ol’ Number 65.

To celebrate his retirement from WorldSBK, Davies decided to make some more clouds. Like there wasn’t enough around already. Cheers, Chaz!

Well. That’s that, then. The 2021 season has come and gone. Next year promises to be an epic saga.