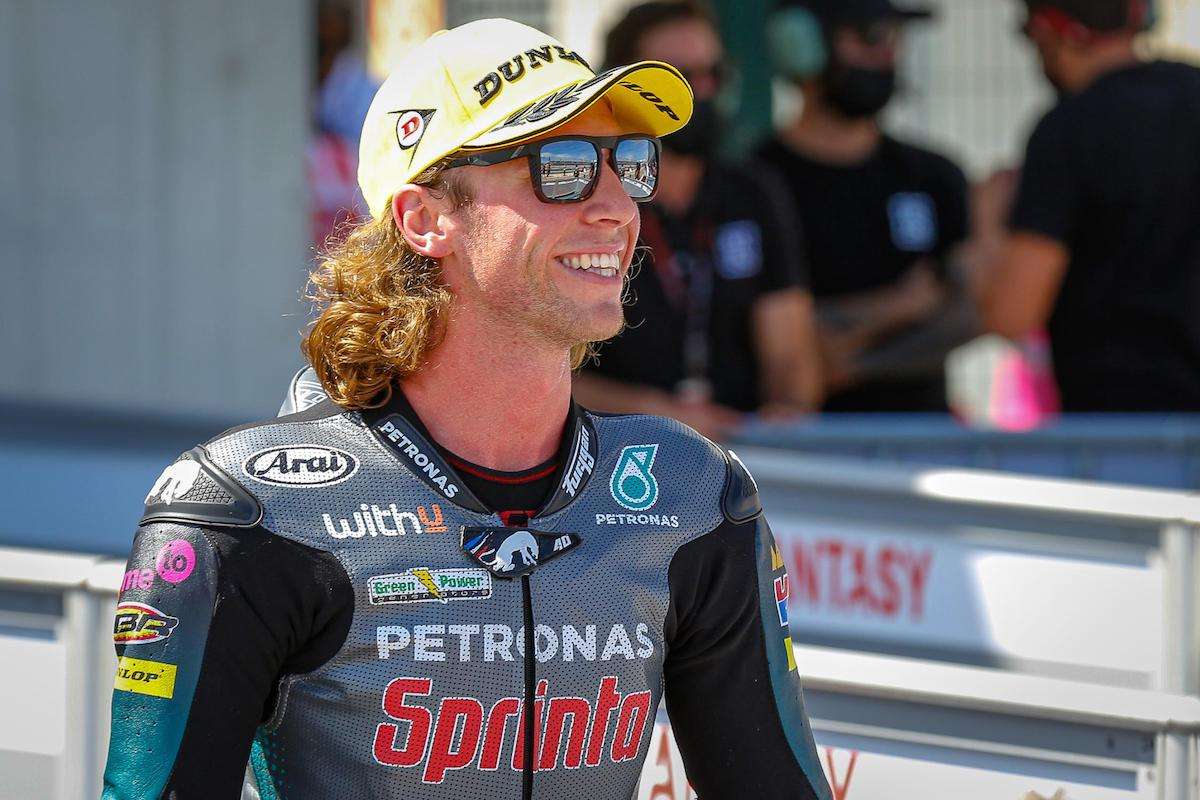 Griffons in the air – okay, okay, vultures. But they’re griffon vultures. Probably the reason behind the lack of crashes during this Saturday’s qualifiers, too.

The only class to see some crashy parts. Because Moto3 kids are even ballsier than MotoGP okes. Fight
me.

Q1 commenced… for Kunii. He looked so lonesome out there for the first two minutes (which felt like five). Eventually the rest began trickling out onto the track.

Fresh meat – and this Malaysian’s an Azman.

Somewhere down the line, Tatay temporarily lost his way, and nearly lost it completely. By some miracle he managed to squirm through the gravelly bits and back on track.

The Cruisers were back. If there ain’t at least one or two penalties handed out by tomorrow, I swear I’mma be upset.

That mid-lap wheelie off the track by Salač looked the part, but for obvious reasons he wasn’t uber happy with himself. ‘You are not impressing the ladies now, Filip. You need good lap!’

With a second to spare, Toba surprised everyone by managing to bag another go at a good lap. And blew it. At Turn Seven his bike performed the perfect Roll – ten out of ten! Rider gets a ten out of ten for that getting-to-feet manoeuvre.

His team was not as impressed.

Q2 rumbled into action with Toba’s crew frantically trying to glue back together what used to be a mint KTM – no pun intended. They proved once again that pit crews are unfairly undervalued by us, rolling him out with less than half the session past.

He did it again.

Same turn, same slide, Toba ending in about precisely the same spot… his bike, however, decided not to attempt another Roll, and rather went to lie down next to its rider in the dust.

Nine out of ten for consistency.

It seemed like Toba would be the only casualty of the day, until the final laps saw Suzuki playing rocket-launcher through the exact same turn as him. That bike went like a proper rocket, and was never seen again.

But never mind all that. Dazza, what did you wash your hair with this morning?!

Darryn went out early, put in a stinker of a fast lap, and went for some Pitlane & Chill.

Don’t you lie, that stressed every single one of us the hell out.

With exactly a minute left of the session, Darryn decided to hop on and go out, for the hell of it and to get some practice starts in.

That made him stalling on a practice start all the more hilarious. Luckily he’s a big boy, and push-started that Honda like it was a scooter. I could watch that bit over and over.

Cautious celebrations are at hand. Darryn took pole with that rapid lapper, Rodrigo flew up into the second spot and Suzuki, crash or no, managed to take the third spot on the grid.

Q1 kicked off with a rambling off of all the subs for this weekend. Subs as in substitute riders. Where the F…udgefactory was your mind at?

Most prominently featured was Darryn’s Moto3-teammate, McPhee. He managed to top the list… of subs. Lol.

We were instructed to go out and read John Hopkins’ new book. Anybody know the name of said book?

There were no crashes. The closest to that we got was Roberts’ gravel-meandering towards the wall. He managed to not fall over.

On to the second session, and again nobody crashed. Roberts felt it necessary to do a repeat performance of the Gravel Meander, this time managing to kiss the wall with his front tyre. You could almost hear the cuss emitted through that headbang.

Motorcycle racers don’t belong near bicycles – Raúl was their latest victim; he somehow managed to fall over while stationary on his bicycle this week, breaking a bone in his right hand and scoring some stitches over the outer knuckle. You could feel the pain through his onboard, post-qualifying footage.

Lowes sailed into pole; Gardner seemed quite lost until that final lap flyer, which looked more at home in a chase scene from Mad Max really. Behind his antics, a very uncomfortable Raúl stole the third spot on the grid.

Again, nobody crashed. Lots forgot where certain corners cornered, but none of them went flying. Pfff.
Welcome Maverick to the Aprilia world – please don’t break it.

Zarco’s bush-squat warm-up maneuvre at the start of Q1 seemed to have paid off today. He topped the first session.

A certain Crashloan… er, Crutchlow has made it clear he’s not worried about positions, but rather focusing on doing his actual job as test rider. Well, what better way to test a bike than to actually race it?

Did anyone else notice the Suzuki guys almost dropping Rins’ bike in the pits? That would’ve been hilarious.

Post-Q1, Brad rapidly refuelled with Banana Power for his Q2 attack. Nothing like a banana to give you some woema.

A Quartararo fangirl’s day was made when the cameras caught her with her Fabio sign… and Fabio’s day was made when he checked that hot piece hopping up and down in his honour. Somebody organise them a date after tomorrow’s races. C’mon; make it happen. Over some uber-romantic Mikkie D’s (ack). MAKE. THIS. HAPPEN.

Not expecting a break into Q2, Brad had no soft rubber left to pound the track with. This was unfortunate, as he demolished that Q1 session. Let’s see him Binder-bash his way up from twelfth again tomorrow. Because we know he can.

Late in the session, Bagnaia set the Duc to light-speed and crushed the All-Time Lap Record, taking pole along with it. His mate Miller slid into second at the very last minute, knocking Fabio into the third spot. (Don’t worry, Fabio; I’m sure she’s still got the hots for you.)

Miller did a red-hot stoppie. Look; wheelies may be cool, but those high-ass stoppies are HAWT.
That concludes what was a relatively calm day of qualifying. Here’s to more mayhem during the Sunday races!