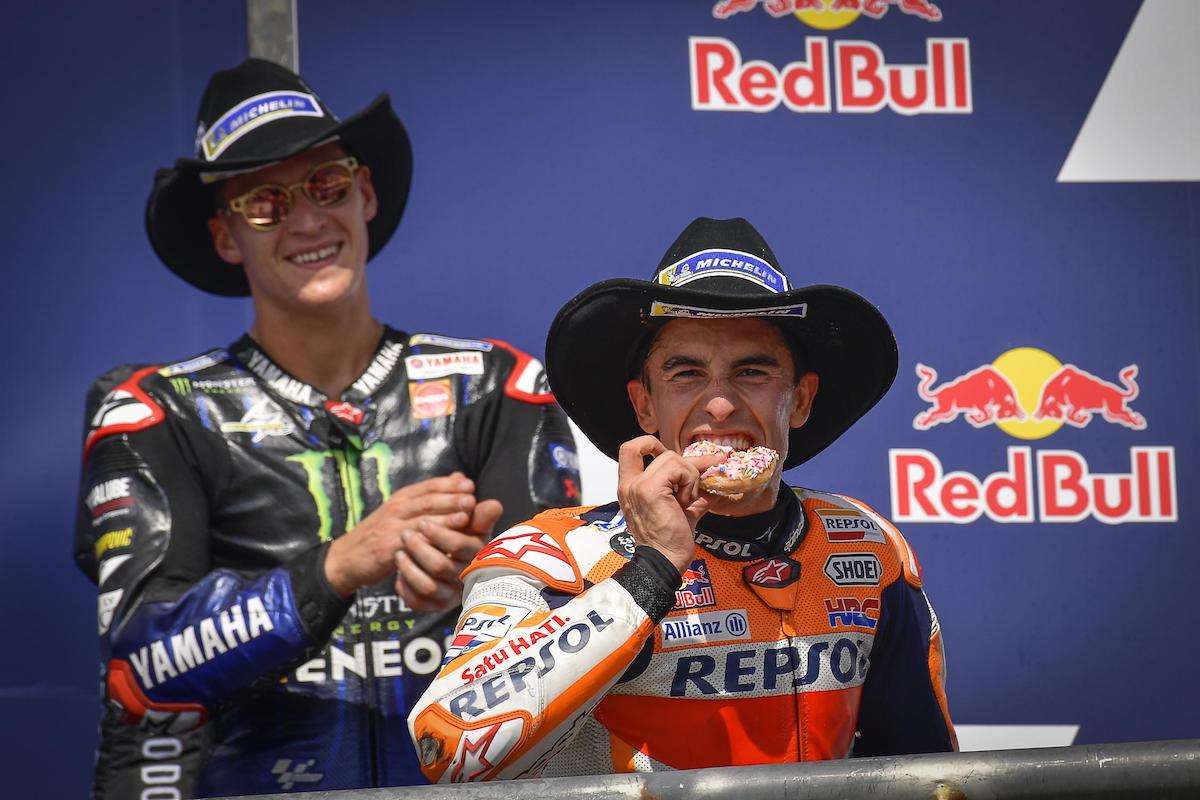 That track surface is bumpier than the ‘resurfaced’ R555 between Middelburg and Witbank. They could host a Motocross race, easy.

Lots of sore behinds Monday, what with being launched out of their seats over and over again.

Everything kicked off relatively normal; Artigas got a little over-eager on the start, jumped the light a wee bit, and scored a Double Long Lap Penalty.

By the second lap, Darryn was up all the way into seventh.

On the seventh lap, the chaos commenced. Salač made hard friends with Turn Eleven when his bike launched him over the bars, all the while trying to twist off its rider’s right arm as he made a full three-sixty above the screen.

Salač landed hard, his murderous bike made one last attempt at decommissioning him, and went to rest in the middle of the track. De-gloved, Filip looked like a frumpled piece of pie dough on the edge of the track.

It took a moment for the guys in charge to call for a red flag. Everyone had to return to the pits; Antonelli fell over just as they announced the red flag – a little fortune for him with Salač’s misfortune.

He could join in on the restart.

So, Quick Restart; you know how it works. The race was cut down to a five-lap sprint, with the new starting grid positions taken from the last positions registered before the red flag – which meant Lap Seven determined your spot.

Daz in the pits, wind in the hair, looking like an advert for some kind of tropical drink… Nine out of ten.

One third of race fans knows how camera angles work.

Right. Moto3, Take Two. Kunii got hauled from the grid just before the new race got under way.

On the first lap of the new race, Adrián Fernández and Kofler had a moment through Turn Eighteen, taking them out of the race.

By the second lap, Guevara’s bike developed a sick, which forced him to retire from the lead. This upset the rookie immensely. So much so that he went on to kick just about everything in the pits between attacks on the floor and bouts of screaming that could contend with my childhood alarms, which sounded whenever mother disappeared from sight in the grocery store.

But it was on the third lap where the chaos reached heart-piercing levels. Öncü clipped off Alcoba’s front wheel, sending rider and machine into the horisontal plane – right in the path of oncoming traffic. Hearts stopped; blood turned to ice.

Bits of bike flew in every direction, along with riders and the remnants of their motorcycles.

Alcoba’s bike had landed in front of Migno, who was forced into a Motocross-jump, miraculously missing Alcoba. Acosta hit the mayhem with enough force to launch him into the armcos.

Everyone feared the worst. Surely there was no way everyone could walk away from that Smoke & Sparkshow unscathed…

But, they did. All three riders walked off to their pits, and frankly looked like they’d simply parked and gotten off.

Lots of discussions ensued; team leaders were called into meeting. What to do? Another restart?

People are going to miss their flights! That was one of their main concerns? Not the possibility of a third – potentially less injury-free – incident?

In the end it was decided that there wouldn’t be any more Moto3 for the day, and the final results would be the standings at the flying of the first red flag.

That meant that the stricken Guevara was the winner. Did you see that kid’s reaction when they told him? It was priceless.

Second place was awarded to Foggia, and third went to McPhee.

Darryn got a decent seventh. No use in contemplating what could’ve been, had that five-lapper transpired differently…

The Moto2 race was delayed by ten minutes thanks to the mayhem that was Moto3.

On Lap Four Lüthi threw his bike into Turn Nineteen. Literally. That slick transition from slide to sitting casually trackside deserves a seven out of ten.

Bad luck hit Gardner on Lap Six when he ran out wide, ran out of grip, and couldn’t get his bike to start again. In his anger, he hit its fuel tank. It’s not the KTM’s fault, Remy. Go clap yourself.

A lap later Garzó lost it through Turn Twelve. He managed to rejoin the battles, only to retire to the pits on Lap Eleven.

Lowes retired to the pits on Lap Ten, frustrated by an electrical gremlin which had hitched a ride since the start of the race.

By half distance, Raúl had pulled well over two seconds from second place.

Arenas had a fall on Lap Twelve; he managed not to end up a nose-ornament on someone else’s bike, but looked rather pained on his brisk walk off-track.

By the fourteenth lap Schrötter was forced into retirement by a misfiring, non-revving bike.

It’s been a while since we saw a synchronised barrel roll – Vietti and his bike attempted one through Turn Two. Solid seven out of ten.

Eons ahead of the rest, Raúl Fernández took yet another race win. Di Giannantonio claimed an overdue second, and Bezzecchi took third.

Would you look at that. Marc Márquez did what he had always done – annihilated the rest of the pack. I’m impressed.

A few laps later, Zarco did the same through Turn One.

By Lap Six, the gap behind Marc broke past the one-second mark.

Lap Nine it went over two; Lap Eleven saw it stretch up into three-second territory. By the sixteenth lap he was four weeks ahead.

The crashes continued for Aleix Crashpargaró through the carnage-happy Turn Thirteen.

Martín’s luck began to slide quite rapidly down the gutter, and on Lap Eighteen he got whacked by a Long Lap penalty for his ‘shortcut’ through Turn Four and Five.

Marc was the Old Marc today, claiming victory with weeks between him and Fabio, who was very happy with his second place. Bagnaia managed to claw his way into third.

Miller gave Mir a good kakking out for his overeager moves that cost them valuable positions. One can only imagine what colourful Aussie insults were emitted from that helmet.

Marc did a wheelie over the line; and made Big Clouds. Donuts were munched on the podium. Non- Márquezians be warned: the Márquez fans will be insufferable for weeks to come. I just want some donuts, too…

There are few races left for 2021. It can only get better!