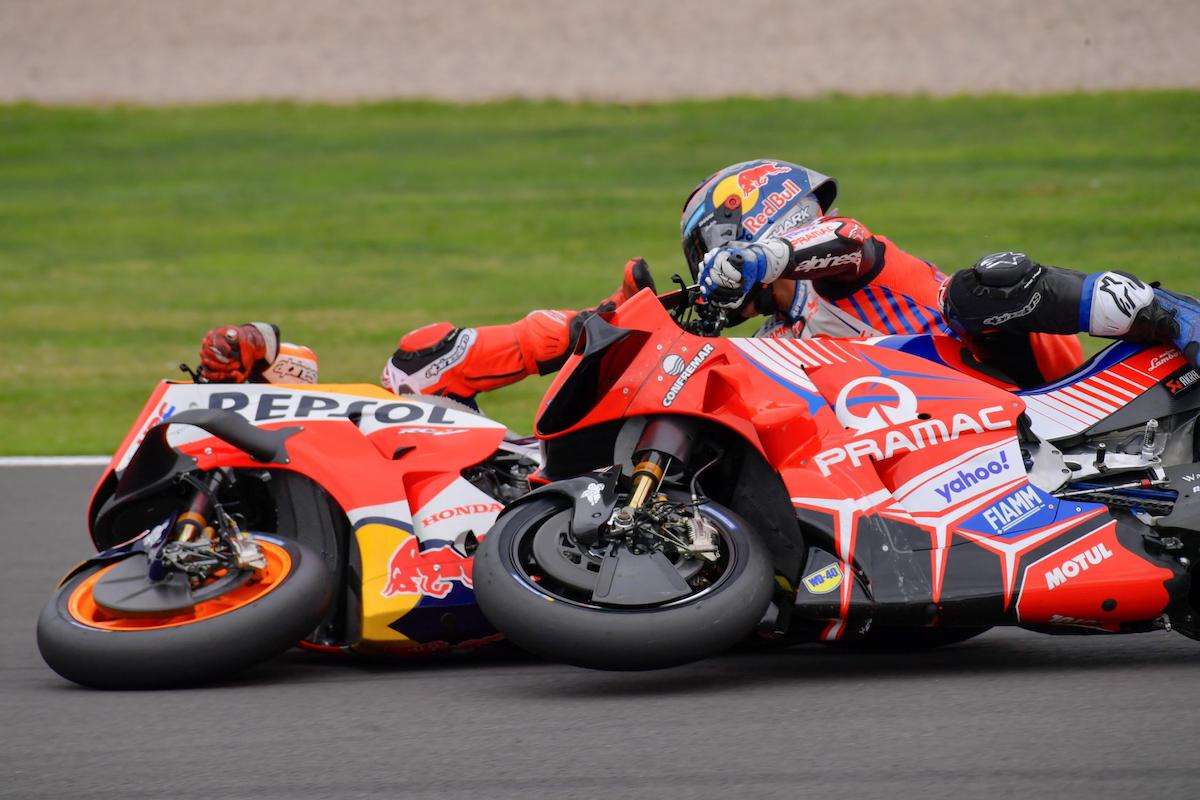 Thankfully it was back to work by the time the Moto2 race was due. And it stayed at work while I caught up on the main race thereafter.

By the way, I hope they pay the guy(s) who cut the Silverstonean grass very well; there was not a patch of lawn not mowed with excellence.

Moto3 was not as extreme as it usually is. The youngens behaved themselves – for the most part.

Early on Acosta and García shared a handlebar-fist bump moment. Somehow this gave Acosta’s brake lever guard an erection which lasted the entirety of the race. The urge to pop a tiny flag on that pole was immense.

Two laps down, Darryn had managed to divebomb his way into fifth. Glimmers of podium-hopes flickered.

Continuing a less-than-satisfying weekend, Toba wandered from the track on Turn Eleven. At least the teleprompter got his name right again.

Migno can’t get a break as of late, can he? The poor fellow was racing as good as anyone, when very suddenly his bike developed mechanical heart failure on Lap Six. Looking down at its left flank, he must’ve been crying, swearing, or both as he lifted his hands dispiritedly.

By the tenth lap Antonelli and Fenati were fighting a very lonely battle at the front. ‘Battle’. They seemed more like two guys on a breakfast cruise formation for the most part.

That sensation known as Acosta was not having a good race. It would’ve been painful to watch, had I liked the kid a little more. A steady climb up the position-ladder, followed by a slip from the rungs which battered him down multiple spots. This dance repeated itself through the entire race.

Daz fought valiantly, and in the end had to settle for seventh. Given the starting position, that was not terrible.

Did I hear a few girls wishing out loud that they were a Husqy? I’m sure I did, when Fenati gave his victorious steed a heart-filled smooch.

Deserved that kiss, it did. Husqvarna and rider absolutely dominated that race, squashing the Pole Start Curse when they took the victory.

Having kept Romano honest for most of the race, Antonelli settled for second, followed by Foggia (again) in third. That Moto3 podium was more Italian than your mama’s spaghetti.

The middleweights kept us entertained more than has become standard. I ain’t complainin’.

On Lap Four Baldassarri had to retire to the pits. It looked as though he was comfortingly patting his bike, trying to assure it that he’s not angry at it. He did look rather dejected as he slunk into the pit.

Bezzecchi and Gardner kept things spicy for the majority of the race.

One can only assume that Gardner needed some new Jockeys after Bez hit an invisible wall on Lap Six, testing Remy’s reflexes – which, I’m happy to report, were sharp as kangaroo claws.
His poor pit crew likely endured some fine Aussie profanities through is comms.

Around Lap Ten Manzi decided he didn’t like the way the grass was cut, and set about altering it. A note, my Italian friend: horisontal motorcycles do not make good grass-cutters.

With six laps on the clock Norrodin retired to his pits.

Nooo! Not Beaubier! With only five laps to go, the cheery ‘Merican crashed out, too.

Lap Fifteen – having had a relatively dismal race, Raúl’s motorcycle left him crumpled up on the tarmac. At first, he looked like he was in considerable pain; but soon after he got up, waved off the concerns of medical staff, and limped off. I would award him the Sparky Award, but I’d already given that away yesterday…

That Bezzecchi-Gardner duel lasted from the blinking of the red lights, right up to the final laps. I’m happy.

It was Gardner who claimed victory in the end, with Bezzecchi having to settle for second, and Navarro – having raced just as brilliantly – claiming third.

Gardner was so happy, he made clouds. And kicked a camera.

Lowes tossed his gloves at the fans.

The Race That Was Nearly Not Watched. Technology can be an idiot-thing.

Jack’s front wheel got violated on the grid by Aldrich. Apparently, there’s a little barcode-reader that let’s ‘em know what tyres the riders are on. Jack’s wasn’t working. Much like a certain local supermarket’s, when I’m in a hurry.

On the first lap, Marc spotted some dirt on Martín’s fairing through Turn Seven, and attempted to polish it off with his bionic shoulder. Martín obviously didn’t say ‘thank you’, because two turns later Marc came through and wiped him straight off the track.

It took Fabio five laps to reach Pol, divebomb the sh*t outta him, and wave goodbye as he began disappearing into the distance…

All that Espargaró-on-Espargaró action was delightfully entertaining.

By the tenth lap, Quartararo was three days ahead of them all.

Was I the only only one rooting for Aleix to finish on the podium? I’m sure I wasn’t.
That last lap fight with Miller had me chewing my fingers off.

Quartararo won by a week, with Rins very chuffedly taking second. Having fought viciously, Aleix managed to claim the third and final podium position – that made him the first rider to take a podium for Aprilia in the modern MototGP era.
He was so happy, you’d swear he’d won the race. I’d have cried, too, Aleix. He even dedicated it to his – very much not unpretty – wife.

Fabio was celebrating so hard, you’d be excused if you thought that it was his very first time winning a GP race.

Binder Senior raked in a respectable sixth place. It’s those conkers weighing him down. That’s my argument and I shall stick to it.

That, dear reader, concludes the British round of the MotoGP. It was a good one.