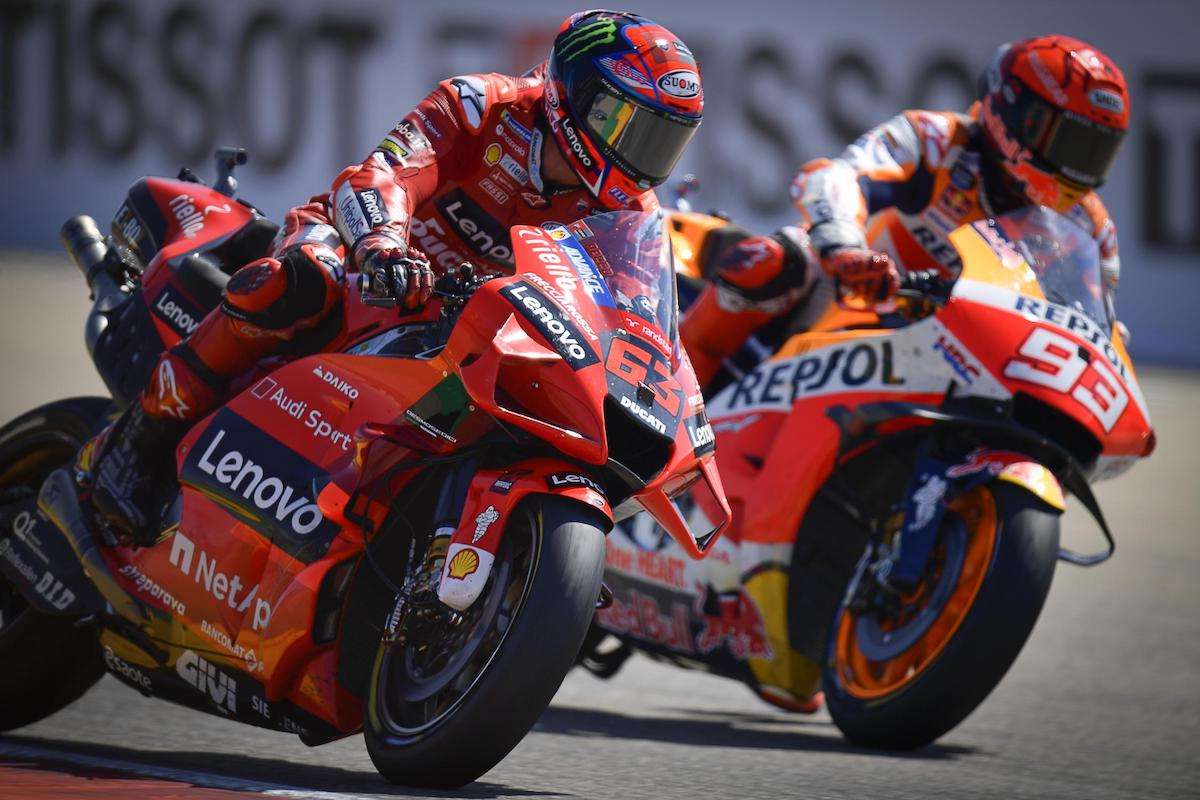 What more can I say but that today was a day filled with great racing.

Only five rounds remain on the MotoGP calendar after this Sunday; it’s going to get crazy!

As per usual, the Moto3 circus delivered some insane racing entertainment.

More contact made than in a rugby match; half of which featured Acosta.

Very early on, Salač’s bike wanted to take the wrong path through a turn, leaving it in the dirt and its rider projected into the next country. Salač performed an Olympic-level sprint back to where his motorcycle was dirt-napping. Ten out of ten for the sprint.

By the seventh lap, Rodrigo once again took to the sky. For f*ck’s sake, Gabriel. What did I say? Just because you’ve got an angel’s name, it. Does. Not. Mean. You. Can. FLY!

On Lap Thirteen, Migno executed a Super Save. Everyone’s much impressed, except for whoever needs to wash his underwear afterwards.

The Moto2-bound Golden Child, Acosta, learnt that he, too, could blunder spectacularly. With four laps left, he got over-eager down the inside of Artigas, lost the front, and swiped Artigas’ rear from underneath him. This sent his fellow Spaniard on a surprise-space-launch from which he landed quite clattery. Both of them ended up in the gravel.

Acosta made a run for it with his bike; he looked like a bike-thief trying to escape the cops, or in this case, the marshals trying to stop him. Let it go, son. It’s too late.

That last lap was total mayhem!

GasGas teammates García and Guevara exchanged more paint samples in that final lap than two reps at a paint expo.

On the last pass through Turn Twelve, García paid the Pushtoohard penalty. I’ll hand him the Moto3 sparky award, at least.

Post-race, his bike was shown cowering in a box, vomiting heaps of gravel onto the floor.

Oh, but the action continued! On the final turn, Alcoba and Fellon encountered a very curious demise together.

Alcoba looked like he was re-enacting a stomach-gunshot fatality next to the fences. We hope he’s alright.

The Battle of the Dennises was waged for the entire final lap, ending in a near-photo finish across the line. It was Dennis (Foggia) who took the victory in the end, with Deniz (Öncü) being content with a second place. Behind them Sasaki rode valiantly into the third spot.

The middleweights also delivered today. Right from the start Lowes tried to bolt – and for a moment, looked like he’d managed it.

That is, until Raúl reeled him in on Lap Four, and continued to show Lowes how you bolt successfully.

Bezzecchi and Vierge shared a forceful bodyslam off the grid. Both stayed upright.

Biesieskirtjie managed to earn a Double Long Lap Penalty for jumping the start. His solution? Crash on Lap Three, and walk the two Long Laps.

Riders fell like flies through Lap Four and Five, beginning with Vierge; Lüthi followed suit right after that.

Creating a theatrical ‘booming’ cloud of dust, Garzó joined the pile of downed flies. But not before giving the gravel a drop-kick. I’d say that kick has potential over the goal posts.

They just kept droppin’… On Lap Six Arenas went down. Attempting to lift up his ride, he looked it over questioningly as if asking: ‘Why you wont get up, bike?’

A lap later Dalla Porta once again got Deported, making it six out of seven races with ‘DNF’ next to his name. DNF does not stand for Damn Nice Form, Lorenzo.

By the ninth lap it looked as though Raúl and Lowes were going to merrily cruise into first and second respectively. At least that was half true.

Some bike-bowling practice was worked in on the tenth lap by Bezzecchi; great slide-form, eight out of ten. Bowling, eh, about a five. He then felt a need to display his farming capabilities by sowing gravel all around the track. I don’t think anyone appreciated than, Marco buddy.

Tragedy befell Lowes on the thirteenth lap when he went sliding into Turn Seven – he remounted, and quietly rode his injured ride (and pride) to his pits. Much sad; he didn’t even look mad.

Lowes’ lowside gifted Raúl a near-six-second advantage over Gardner, who’d inherited second place. By Lap Fifteen it was over six and a half seconds. Lap Eighteen he was a week ahead.

I have to mention the excellent third-place scrap that was had between Fernández (Augusto, not Raúl, obviously) and Navarro.

Chantra must’ve said something offensive to his ride on Lap Nineteen; it nonchalantly executed a WWE bodyslam move through Turn Five, whacking its rider’s head on the tarmac.

By now, Raúl was so far ahead he could see the back of his own helmet ahead of him…

Gardner: ‘I don’t like this circuit at all.’ Also Gardner: cruises into second place.

Let’s take a moment to focus on Raúl’s completely inhuman performance today. He not only won the race, but he won it years ahead of the rest of the pack. With a buggered throttle/brake hand. He’s earned some of my respect today. That kid is made of MotoGP-alien materials.

I mean, that onboard footage of him as he crossed the line said it all. Boy was crying, no arguing that. Hell, he barely managed – with assistance – to pry that glove off. That there is a hand that’s going to look like Mickey Mouse’s tonight. Screw the Red Bull, give the kid some tequila. I don’t care how old he is.

Raúl thus takes yet another victory, making him the first Moto2 rookie to take five victories since a certain Marc Márquez back in 2011.

Some days later, Gardner crossed the line to take second, and Augusto Fernández fought a brilliant battle up into third place.

Young Fernández sounded – and looked – like he’d just finished a 24 Hour race, on his own, on foot.

With that, the KTM Ajo team took home the Team Championship with five races still left of the season. Not bad.

This shall be redubbed the Pecco Vs Marc Race, featuring Some Other Guys.

Hot off the start, little Márquez crashed out. Oh well.

Lap Two the promoted Moto2 guy, Dixon, left the track – and the race – at Turn Nine.

The entire race was a Marc and Pecco ballet of world-class stature. It was beautiful! (Sniffs)

Lap Twenty One saw the first move by Marc; which Pecco basically ignored, taking back the lead. A few corners later, copy-paste. The next lap saw two more of these copy-paste moves; Bagnaia looked like a bull, blissfully storming around the track, with a little orangey fly circling it constantly.

Then came the final lap; a lap where very few people dared to breathe, and a handful of red hearts stopped beating. There came three more moves from Marc, all of them having the same kind of outcome. Bagnaia simply raced on as if nobody was there. That’s a level of cool that I would love to have during any drive.

Breathe! Bagnaia took his maiden MotoGP victory, and along with it the two-hundred-and-fiftieth Italian victory. But wait, that’s not all! He became the first to pilot a Ducati over the line in first place at Aragón since master Casey Stoner did it in 2010. 2010!

I can’t quite say the same for Mir and his team; they all sounded very unsatisfied; you’d have sworn they came in at stone last. It’s third place, guys, third! Sheesh. Did you even notice the war ahead of you?

Bless his heart. Bagnaia thanking his girlfriend who drives around with him every day was so adorably Pecco.

With that, I sign off. Next weekend we get to see the racing toasters once again; and I get to overload some brain-circuits trying to cover both the GPs and the SBKs at the same time.

Someone please, please send snacks! Or money for snacks.