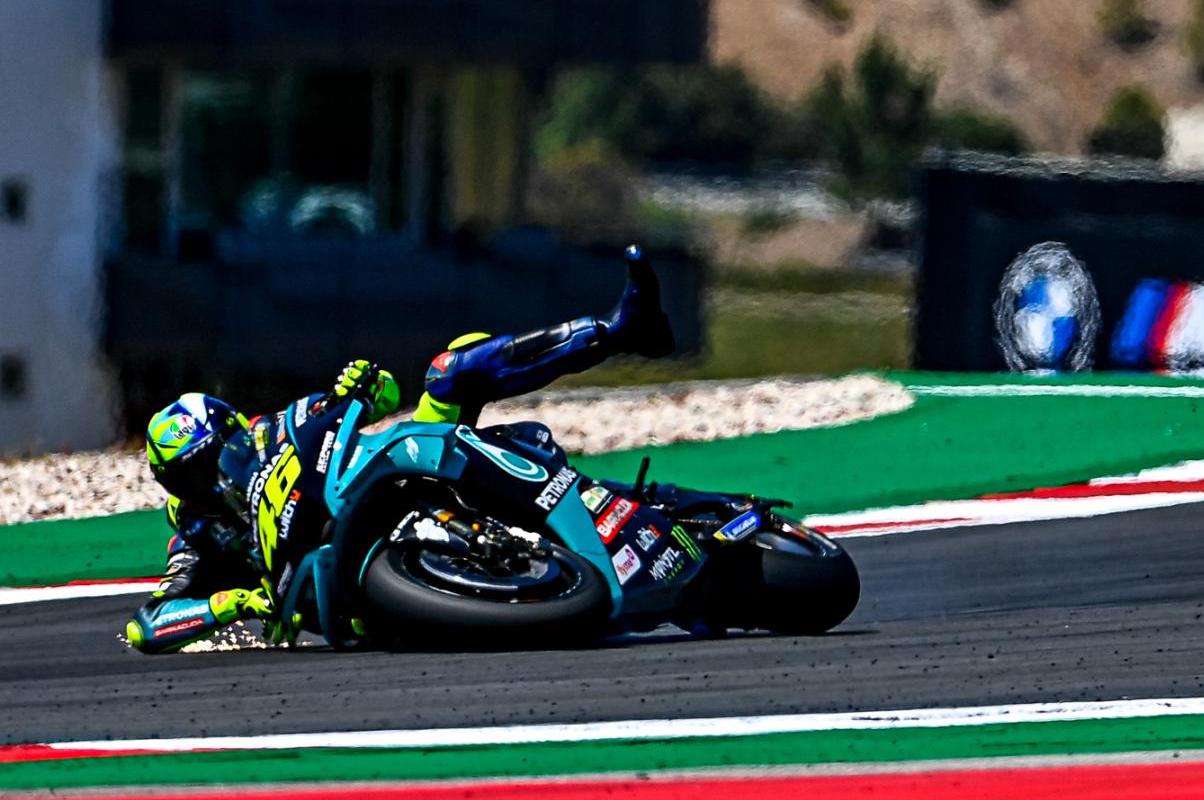 Okay own up. Who waxed the circuit? Who polished all the Michelins with baby oil?
At some point during the races, I swear I could hear Strauss’ Blue Danube echo in the background – it only seemed fitting with all the swoopy slideouts and cataclysmic crashes. There was even a fire.
The sadistic enthusiast in me was delighted at the excitement.
But let’s slow down a little, and break it down race-wise again.

First of all, Darryn got duped. Starting from pitlane sure didn’t do the rockstar any favours. We want clearer answers. That is all.

Along with Junior Binder, Öncü’s unfortunate luck seemed to steam ahead gleefully as he, too, got to pull off from pitlane – with five seconds added just to make it spicier. Considering the number of riders who were lined up in pitlane, as well as the ten-kilometre length of said pitlane, one could almost have had a secondary race.
The first waltzing slide of the day was performed by Artigas, prompted by a nudge from Rodrigo, and with some operatic dramatics thrown in, too.

Some laps later, Guevara and Toba felt like a quick tango was in order. A handful of laps later, Suzuki got swooped from the dancefloor by Adrian Fernandez at the very same turn. His bike was all ‘Nah f**k this’ and simply ran off on its own.

With four laps on the clock the lead battle turned into an outright war. Excellent stuff!
García turned into a rodeo cowboy for a second – stellar job done not crashing there.
Not far down the track Masia did the Slide; massive style points to him. He made that look good.

Let’s all focus on Acosta. This child is not of the common racer cloth. In the final sector, he takes a front end wobble as if he had planned to do it and simply bullet-trains ahead to win the race by a rabbit’s whisker. Hats off to him, but also to Foggia – and to a great extent Migno – for an absolutely spectacular spectacle of a battle.

Moto3 arguably had the least amount of Grand Smashes, but it did not disappoint on entertainment.

So Acosta takes a nailbiter first place, accompanied by Foggia in second and Migno in third. Someone must’ve cut a lock of Darryn’s hair in the pitlane start, because he simply did not have his usual mojo about him. No worries, he will be back.

Moto2:
Arguably one of the more entertaining Moto2 events I’ve watched, there were crashes, battles, and even a fire…
Entertainment right from the start as Sam Lowes goes into orbit, whereafter his bike decided to give him some harsh tail – wedging him beneath it as if to express its disapproval.

The speed at which Navarro came shooting past the camera on his behind reminded of bobsleds. Only his ‘sled’ was a mile ahead of him travelling at the speed of sound.

And then… Great Balls of Fire! Montella attempts to find the orbit that Lowes had gone to earlier, his ride spontaneously combusts as it nonchalantly wipes Manzi from the track… and then both bikes were on fire, there were moto-fireballs flying all over the place, riders tumbling like ragdolls. It was chaos. Sadistically exciting chaos. Thankfully, both riders are alright. The same can’t be said for their bikes.

Almost simultaneously Ogura and Beaubier played bumpits, which sent Ogura into his teammate Chantra, his motorcycle yelling ‘Surprise!’. Well, if I were that machine I sure would’ve.

Sometime later Bulega swiped Vietti’s front end from under him, and the audience shuffled to the edge of their seats expecting a McPhee Moment. Fortunately Vietti reigned his boots in and merely waved a disgusted curse at Bulega while walking away. Spoil sport.

For a few laps the Americans were imagining Star Spangled Banner playing over the rostrum – and for a while it looked like Roberts had a chance.

Six laps from the finish Raúl Fernández decided it was Time, tucked in and ripped through the top pack to take the lead and kick dust into the eyes of the more experienced ex-leaders behind him. It was indeed the weekend of the Astronomical Rookies.

Stuff heated up on the final pass – Gardner gave Roberts a shove to take third just as they rounded the final corners. Joe not happy. But racing, that is.

Yet another rookie takes a win, well piloted Raúl. After him came Canet to take second, and Gardner to take his nudged-third.

MotoGP:
Slip-sliding away… Just slip-sliding away…
Still waiting for the one who cleaned the tyres with baby oil to speak up. With so many riders doing The Slide, it looked like a bad ice-skating race.

Twenty laps to go: Miller does The Slide, his bike drawing a perfect line in the pebbles.
Nineteen laps to go: Oliviera does a little slideout.
Eleven laps to go: Rossi’s baby-oil-tyres decide to let the Doc lie down.
Seven laps to go: Álex Rins, the only guy putting the fight to Fabio, slides out in sparky disappointment.
Six laps to go: Zarco goes down, and does not hide his frustration with the situation.

All eyes were on the returning number 93, and he started off exceptionally. That was until he caressed Mir’s rear tyre with his front. Thousands of sucked-in breaths were heard as viewers feared he would come off. But in true professional style, Marc merely absorbed the wobble and rejoined the pack. He never really recovered positions afterward, though. Still, seventh on your return-race post nine months of being MIA is nothing to frown upon.

With seventeen laps left, Fabio decided to go to work, pushed past Rins, and disappeared over the horizon never to be seen again… What a race El Diablo had. ‘K, bye!’
The only other rider who almost kept up with him was Rins. That is, until he did The Slide too.

Nakagami showed he has some ancient samurai blood in his veins by simply completing the race while in chronic broken-bits pain.

After having his blistering lap cancelled in qualifying, Bagnaia showed exceptional spunk, coming from eleventh to take second. But let’s not forget our homeboy Brad; he had the commentators mesmerised by his absolutely blistering flat-out run that took him from fifteenth on the grid to a finish in fifth. Imagine if he was on a faster machine… Well run, Brad.

Fabio celebrated with a perfectly executed Ronaldo celebration-thing, taking the top spot on the podium light-years ahead of second-place rider Bagnaia, who was followed over the line by Mir.

Great show, everybody. This 2021 season keeps on delivering.