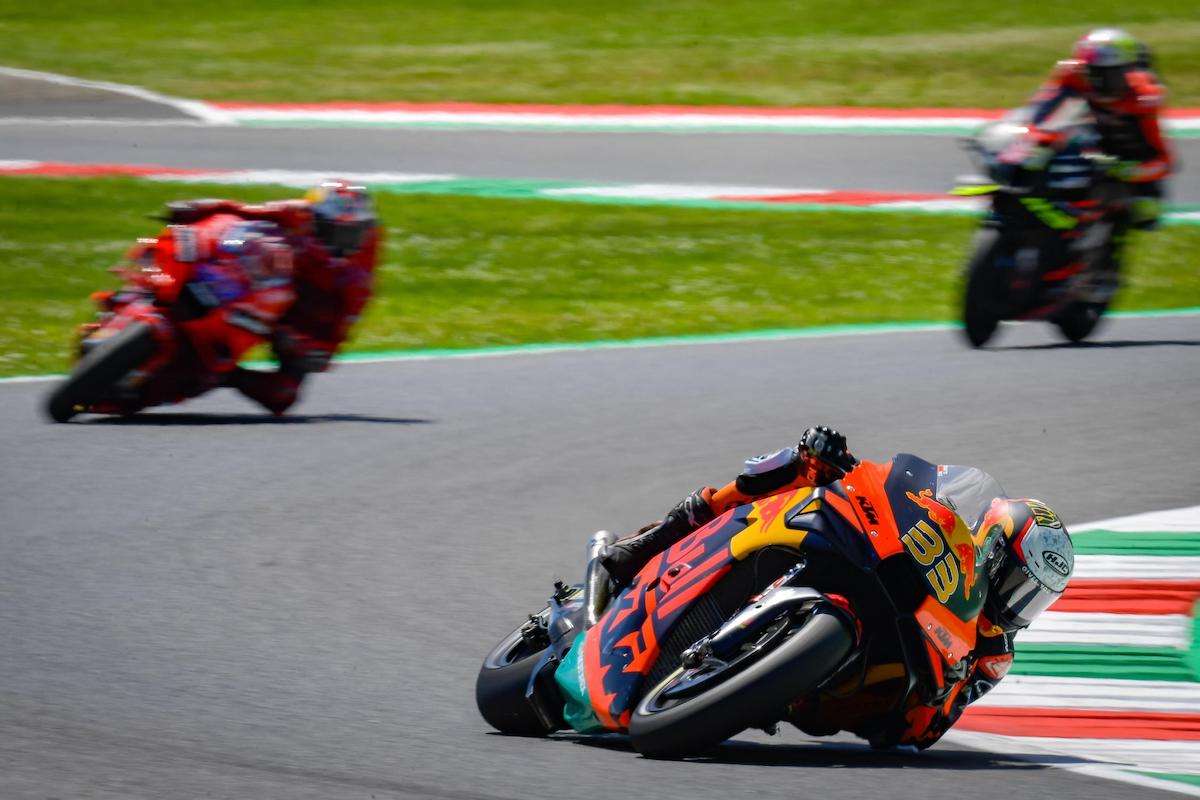 ‘Twas a day filled to overflowing with mixed emotions. The racing was exceptional, the weather was blissful… But a sombre mist hung in the normally electric air.
It is never a joyous occasion when one hears of a rider’s passing. We were all praying that Dupasquier would recover; I don’t think anyone really expected him not to. With track casualties being so rare in modern racing, we tend to be lulled into a state of belief that these racers are unable to die; that they are somehow immortal.

This weekend we were harshly reminded that this is still a tremendously dangerous sport, and it will forever be so. Every rider was reminded of their mortality, and I am certain not one of them was left untouched.
May you rest in peace, Jason. Too young, too soon you have left us.
On to some more light-hearted things now. Things I very nearly did not write; but I finally decided that we all need a bit of a lift.

Moto3 was absolute mayhem. The lead changed more frequently than a politician’s stories. Nails were chewed to the cuticles; heart rates blew through the roof… Beautiful!
It didn’t take long for the chaos to commence. Through Turn One Surra hit an invisible brick wall, looking like he’d accidentally discovered a reverse gear on his KTM. This caught Adrián Fernández by surprise, sending him sliding off track.
And then there was a rogue motorcycle attempting to rejoin the race, riderless. Behind it there grew a cloud of dust, arms and legs tumbling within it. It appears Öncü’s ride turned bronco and kicked him into the gravel moments before Tatay, Kofler and Migno united to create the Limbed Dust Demon.
Turns out Migno got collected when Tatay lost it, along with Kofler – whose ride was the one that decided ‘F&%k this, I’m out of here’. Its solo career was cut rather short as soon as it realised that steering without a rider was harder than anticipated.
Let’s quickly focus on Darryn – he was right there, giving the front pack hell. He even led the race a few times; after an incredible twenty laps of constant war, the junior Binder Brother nabbed a respectable fifth place. Well run, you beauty!
Foggia also ran a beautiful race, claiming a well-deserved first place. Breathing down his exhausts was Masia, who reaped a close second, and on the final step of the podium was Rodrigo.

The middleweight class delivered another exciting bit of racing.
Bezzecchi may be in hot water after lighting up his rear tyre just before the lights dropped. This is not a day jol, son. You can’t be doing burnouts at the line.
There was a short game of Moto Pinball entering the first corner, with Dalla Porta being used as the ball. A rather peeved Dalla Porta was shown taking out his frustration on the gravel. For a moment there it looked as though he was going to Bruce Lee kick his fallen motorcycle. It wasn’t the bike’s fault, my guy.
Baldassarri go bye-bye. Right arm didn’t look all too comfy.
Not long after, Navarro torpedoed from the first corner… sideways. Is it just me, or was that footage from Gardner’s front camera funny as hell? Navarro turn, Navarro lean, Navarro Whoop! slide away. Slide Style points: nine out of ten.
The next victim of Mugello was Vierge. Not as stylish a slide as Navarro, though.
So many sliders, so little time… Di Giannantonio deserves a mention for his – albeit wonky – post dismount attempt at a pirouette.
Having rapidly reeled in the race leader Raúl, Sam Lowes found himself abruptly facing the pebbles. There he remained, motionless, long enough for the medics to rush out. They hardly reached the Brit when he got up, stomping away in obvious self-loathing. As the commentator said, he must’ve been properly miffed with himself. They had to later pull him from between the trucks, where he was having an obvious sob.
With Lowes gone, Gardner very quickly closed in on his teammate, offering up an excellent last-minute battle for the win which lasted right up to the flag.
In the end, Gardner took top honours with a hundredth of a second to spare between him and Raúl. Similarly, Roberts only just managed to fend off Bezzecchi in order to claim third. However, Roberts was knocked down a place for exceeding track limits, giving the third podium step to Bezzecchi.

Two exciting races down, the main event did not disappoint.
Have you ever watched those motorcycle blooper videos, where one guy rear ends his braking buddy, and thought ‘What an idiot!’? Well, turns out that can happen to the best of us. Somehow, by the end of the warmup lap, Bastianini was caught off guard by Zarco warming up his brakes, resulting in the Italian sprinting to the pits to retrieve his second bike a-la-running start. Remember those? They were fun to watch.
The race was still warming up when Márquez slipped from the track. No, not Álex, Marc. Álex managed not to crash this time ‘round. Trust the elder Márquez, though, to execute a perfect sat-up-butt-slide track exit. For that he gets a ten out of ten. Minus half of that for clattering into Brad.
Ten out of ten Push-off score for Brad on the other hand, saying ‘Not today, boy!’ and staying upright while the Spaniard definitely did not.
Kudos to Morbidelli – managing to avoid the Marc-slider, doing a short offroading course and then rejoining the race, uncrashed.
He was looking so good… Bagnaia lost it on Lap Two, rocketing out of the lead in a disgraced plume of Italian dust.
By Lap Five, Quartararo was doing what Quartararo does – disappearing steadily into the distance. By Lap Twelve he was in an entirely different timezone to the rest of the pack. Lap Eighteen saw his lead going into Four Second Land.
Lap Twenty, Turn Fifteen: Rins was sitting pretty, contending for a podium finish. Until, that is, he turned his Suzuki into a low-flying missile. No, Álex, angrily humping the tyre barrier isn’t going to help you.
Nakagami took up some street luge-ing, but forgot he needed a luge board. Consequently he didn’t get very far.
Some more offroading was done by a lost Pirro.
Days before the rest of the group, Quartararo flashed past the flag to take a landslide win. Oliveira took second with Mir in third.
But then Oliveira was third for exceeding track limits; but then again he was back in second, because Mir exceeded track limits, too. I’m confused.
Quartararo held back no emotions. For his win, for Dupasquier. He’s a machine on the track, but beyond that he’s deeply emotional.
Brad ran a great race to end up in fifth, just like his ‘little’ brother. Great show!
That brings us to the end of this rollercoaster Italian GP weekend. Bring on Barcelona!