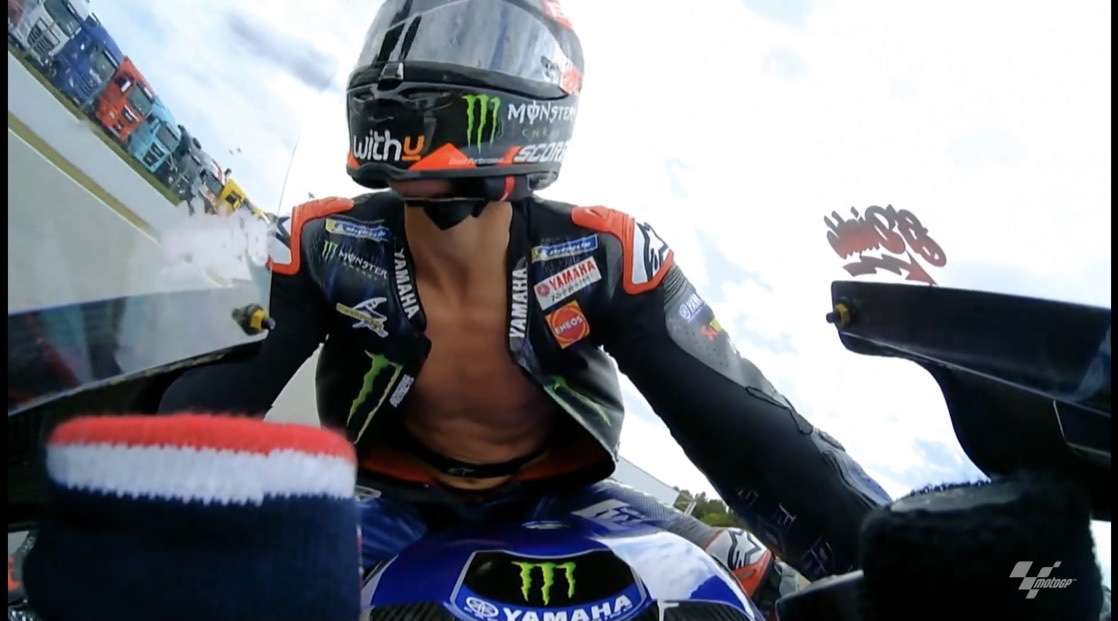 Epic racing. That’s exactly what the Catalan MotoGP dished out today, through all four classes. Yes, Moto2 as well.

The Other Rossi forgot he was on the Warm Up lap and promptly pushed his bike over the cold limit and right off the track.

Acosta doing the Oops-oops-oops-Caught-It dance on the grid was far more amusing than it should’ve been.

Having led the race for a considerable amount of laps, McPhee’s Honda abruptly pulled a sideways-stoppy, tossing its rider aside before attempting to rejoin the race on its ownsome.

This did not pan out well, so it decided to turn itself into a Spinner… If you grew up in the Pokemon-Dragon Ball Z-Beyblade heyday, you might recall those plastic spinners tucked into Simba chips packets. That was exactly what came to mind when those three motorcycles of McPhee, Migno and Suzuki engaged in their bout of whirling duelling.
Suzuki’s bike then turned savage, trying to devour Migno through the momentary mayhem.

Can I just mention how brilliantly Darryn rode today? He may not have taken the victory, but he ran a winner of a race. They grow up so fast… (Pecks a proud tear) Fifth place is not a bad place to finish.

Guevara made a last-minute exit to stage right, surrendering what had looked like a podium finish.

Red flag appeared – confusion spread. Luckily the front runners retained their places. The cause for the confusion was revealed as a tumble-dryer bundle of three bikes and their pilots leaving the track.

And what caused their tumble-drying? Sasaki’s bike that launched its rider into low orbit, that’s what. The two Leopard boys scored lifts back to the pits, courtesy of Alcoba & Fellon MotoTaxi Services.

As a final touch to the cacophony that was the final lap, Masiá lost his third spot to Öncü for dawdling off-track. He was definitely Not Very Happy.

In the end it was García who took top spot on the podium, joined by Alcoba in second and Öncü in third.

Apart from Canet slipping, all went smoothly for around eight laps of the middleweight class; so smoothly that Ramírez got bored and opted for some offroading. Which ended with one of the slowest crashes of the season thus far. His ride said ‘This is stupid, GTFO.’

Bo’s helmet shed some weight down the straight. Heh, ‘loadshedding’.

Dalla Porta took the Sparky Slide award for the weekend.

Ai, Ogura… No points for you.

With the race nearing its end, DiGi and Garzó minced fairings. Garzó gets an eight out of ten for his barreled-cartwheels. He was clearly not a happy camper, shuffling at Di Giannantonio on his knees, waving curse-filled hand gestures at the Italian. DiGi simply limped away, head a-shaking.

Gardner rode a cleverly planned race to scoop up first place, ahead of his teammate, the Rookie Wonder Raúl Fernández. In third Vierge was chuffed to be on the podium again.

Be honest – just about everyone expected Fabio to bolt again, never to be seen again until he crossed the checkered flag.
The racing gods had other plans, though.

The Espargaró boys had a race to forget, Pol losing it early on in the race, followed by Aleix during lap eleven. Helmeted head in hands, Aleix knelt over his fallen steed in a scene that would not be out of place in a thriller movie.

Petrucci forgot to turn, creating an impressive wall of dustcloud.

Not long after, Márquez – Marc, again, not Álex – went a-sliding. His Honda was so unimpressed that it attempted a wheel-to-the-head slamdown. Luckily, it missed.
You could almost hear Marc screaming at himself as he plodded away; in the wrong direction. A marshall quickly scooped him around and shooed him in the right direction.
One can’t help but wonder, with his third crash in as many races, whether something was amiss with the Spaniard. Not physically, but psychologically.

Rossi did a slide. His bike decided the bagged look suited it brilliantly.

Lecuona was not having a Great Weekend. With seven laps to go, he fancied a sandpit play; promptly, he left the track and sat himself in the gravel trap.

On the twenty-first lap, Quartararo’s suit felt he was getting far too hot, and promptly unzipped itself. Or maybe it decided that Lap Twenty One through Twenty Four was the ideal time to attract a girlfriend for Fabio by turning him into Bare-chested Racerman. Don’t deny it – some of you ladies were gawking and completely forgot about the insane race that was happening.

Now let’s focus on Oliveira. He fought a valiant fight, leaving everyone in his dust to take a brilliant win. Try as he might, Zarco had to settle for second. Chesty Quartararo had to relinquish his third place due to a three second penalty, giving Miller the final podium step (update: Quartararo afterwards received another three-second penalty for his bare-chested antics).

A quick congratulations to Brad, who raced hard, managing to finish in eighth; even though we all knew he could’ve been higher up had it not been for rolling roadblock Vinales.

Catalunya saw the third round of the Rapid Toaster Race, or MotoE as it is called. It was a shortened race – a mere six laps. But it was six laps of close, sweat-inducing race thrills.

The riders settled in, cocked like a field of pistols ready to fire, the flags went… Granado waved his hand like a flustered child in class. Queue the confusion!

The start is delayed; Granado is chased into pit lane… First up, then down, then back up again. Curse those little technical gremlins. From pole to pit lane start.

Cardelús made it to Turn Three, where he was shown flat-hand pounding the pebbles as if they were the ones to blame for his early retirement.

Not long after, Iwema was shown frustratedly strolling away from the track.

Casadei went slidey – got into a fist fight with the tarmac.

After flying through the pack like a ballistic missile, Granado managed to claw into tenth by the final lap… and promptly left the track in a cloud of dust. His dust-hazed figure stomped away, and you could almost hear him cursing profusely not only himself, but his bike, the circuit and anything nearby; just for good measure.

What a recovery from Pons! After an abysmal French run, he managed to reap the sweet fruit of victory in Catalunya. Right on his tailpiece was Aegerter, the Swede settling for second place ahead of Torres in third.

(Deep breath) With that, the weekend’s adrenaline fix was done. The 2021 season just keeps getting better with every round – next to the stage: Deutschland!