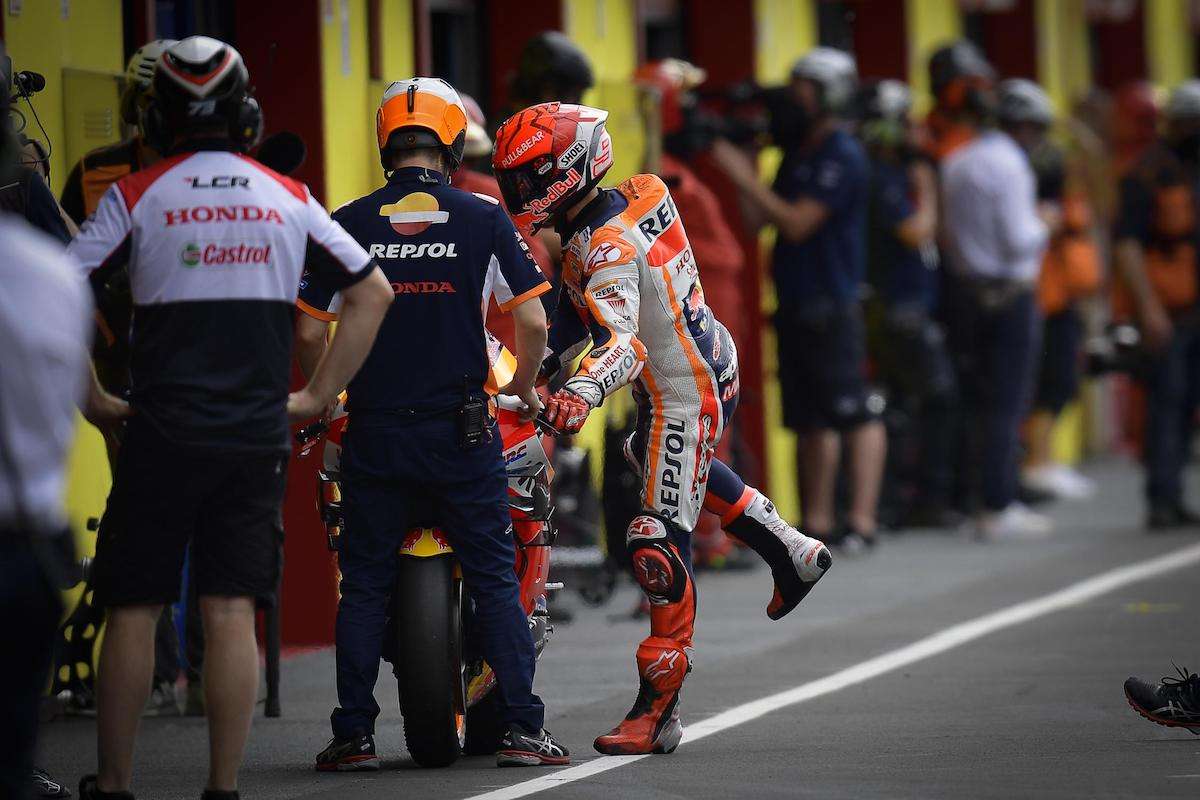 Rolling, puffy-green hills, cloud-mottled blue skies and the lubricious howl of Grand Prix motorcycles. What more can one ask for?
Mugello is undeniably etched into some of the most enchanting landscape around. The weather was surely milder than that of the previous mayhem-making French races; a wispy tease of rain every now and then exciting the commentators.
Quite a few alien names debuting this weekend. Fresh meat!

Acosta is fast. Disgustingly fast. It does get annoying to watch the same Spaniard for fifty percent of the Q1 session, though.
The first to roll in the dirt was Matsuyama – this after his steed boosted him arse-first into low orbit. He used some Asian Superpowers to teleport himself through the passing bike of Adrián Fernández. I give the bike-and-rider synchronised slide-tumble an eight-and-a-half out of ten. His Honda’s nose-pirouette scores a solid nine.
Not long after, Guevara was shown being stretchered away. It appears the GasGas pilot underestimated the distance between his front and Rossi’s rear – which sent him catapulting over the track, thunking down flat on his back before exiting the track in a flailing reverse slide. Rossi didn’t even flinch. Or maybe he did; it’s hard to tell through the helmet.
On to Q2.
I said, on to Q2!
Why is nobody on the track? Oh good, at least Goldie Acosta went out by T-Minus twelve minutes. Bunch of stallers.
It was looking like a clean, calm second session, albeit a ninety percent pitlane-sitting session. The chequered flag was out, everyone was waiting for the final flyers to come through… What we got wasn’t quite the flying we had anticipated.

Near the end of the session, red flags came out and so were the chances of better qualifying positions for a horde of riders – including our boy Darryn, who is now stuck in sixteenth. This is why you don’t ground your pilots for more than half of the session, you nitwits.
An all-time lap record was set by Suzuki, who was graced with a deserved pole position. He will be joined by Acosta in second and Rodrigo in third.

After the carnage of Moto3, both Moto2 and MotoGP qualifying seemed a little bit . . . tame.
They waved rain flags. It was kind of funny after the drenching that was the French GP.
Boy, don’t those MVs look friggin’ sexy in their one-off Italian paint suits? Yes, yes they do.
Aldeguer, a name you’ve heard a few times now via the MotoE races, absolutely blitzed his maiden Q1. I wish I had this rapidity at sixteen. Or just a bike would’ve been fantastic. Bunch of lucky Kindergarteners.
Q2 consisted mostly of the commentators’ speculations on Raúl Fernández’ possible premature move up into MotoGP after a single season in the middleweight class. Will the kid be shunted up a level next year? His personal opinion is that he needs at least two years in Moto2; but ultimately if the opportunity comes banging on the pit door, you open that door.
The Sandblaster Award goes to Canet for his full throttle horizontal exiting of the track.
What kind of black magic is Aki into? There is no other way to explain his luck with stellar riders.
With that, Raúl Fernández takes pole, Sam Lowes and Navarro joining the Spaniard on the front row.

Q1 transpired mostly like this: Marc follow Viñales; Viñales no like this. Marc still do the Follow-Viñales. Viñales speaks in eloquent hand gestures but Marc no reply. Viñales upset, Viñales no finish well. Marc finish first in session, Marc not sorry.
Was Marc acting a dick? Yes, he was. Was it against the rules? No, it was not. Was it ungentlemanly? Very much. But it was enough to unsettle Maverick to the extent that he could not set a proper lap time. Marc is known for his mind games; best you can do is treat them like a taxi treats stop streets; and do your thing on-track. Like Brad did in Q2.
Post-race fist fights should be legalised. It would release all the pent-up tension between the riders, and be excessively entertaining to boot.
By the second go around, there was an entire train of riders behind Viñales. Viñales no likey. He decided to flick into pit lane, which caught out all but Marc. Enter the previously mentioned profuse hand-speech.
The mind games were successful, though, as seen in Maverick’s final lap and the corner-gone-wide. Needless to say, he was steaming like a boiling teapot on a red-hot stove plate. If you were to stick one of those kettle-whistles in his ear, it would’ve whistled quite frantically.
Hopping out of the pits for Q2, Quartararo glanced up to the darkening skies – probably sweet-talking the Italian weather goddess into holding the downpours, please.
It must’ve worked – there was no drenching of riders. And Fabio nabbed an all-time lap record.
Marc remained holed up in his box, carefully picking his tow trucker… And with less than seven minutes left he launched – behind Brad.
Now Brad’s been having a good weekend. And unlike Maverick he straight up ignored the Spanish star Bostik-ed to his back tyre. He’s from South Africa; tailgating taxis ain’t nothing new to him. This gained him a momentary third, and a final sixth spot on the grid; Marc managed eleventh.
By the end of the tumbleweed-crazy final lap Quartararo was sitting pretty in pole – his fourth one in a row. Bagnaia reaped second and Zarco slid into the third spot.
No MotoE this weekend, e-kids.
What would racing be without some controversy? And there sure was a truckload of it this time.
The Binder Bros are looking good – go boys! South Africans are kicking arse all over the moto-racing globe.