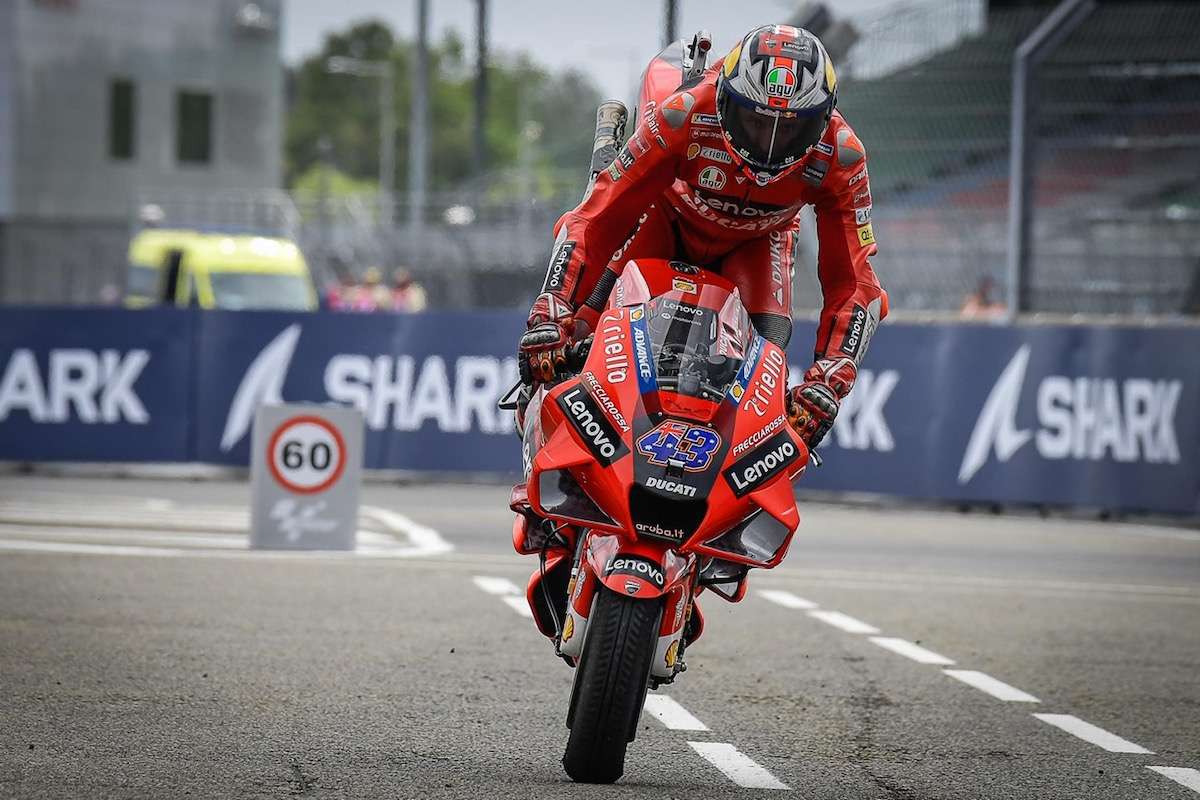 Let’s jump straight into it.

Naturally, Acosta was the focus of nearly the entire race. Look, the kid is good, we get it. Did he bugger it up some today? Yeah. Do they have to bugger up once in a while to ascertain their humanness? Absolutely. Did he recover darned well to end in eighth? Correct!

The track was clammy at the start. So were some palms. Tatay managed to softly slide out upon entering the sighting lap. Don’t you give us the ‘WTF’ arms, Tatay, that was totally on you.

“Relatively calm race for Moto3”… The commentator’s words were still steaming in the cup when Antonelli went into a headbutting match with the tarmac. His helmet looked like a basketball, bouncing off the tar moments before Salač came roaring past. The bounce was so powerful Antonelli ended up back on his feet.

The falls came in hard and fast then – Suzuki was shown lying next to the track, his hands covering his visor in a show of utter disgrace. He was followed closely by Alcoba performing a grand highside dismount.

Next in line was Masiá with a brilliant interpretation of the Spinning on Ice ballet, the ice being replaced by French gravel. I’ll give that performance a solid nine out of ten. And a tube of Extra Strong Deep Heat. There was obvious ouching.

Moments after Masiá’s performance, Golden Acosta did the – by now very familiar – Turn Three Slideout, punting the young star from fifth all the way down the list.

Rodrigo took his crash-turn next on Turn Eight. And with that three laps had passed. A whole three Le Mans laps.

It didn’t take long for wildcard Matsuyama to follow Antonelli and Masiá on their Turn Fourteen gravel explorations. One gets the feeling that Turn Fourteen was jealous of Turn Three who was getting all the crashy spoils.

Our Darryn was running a beautiful race… until Turn Three said ‘Punt You!’; all but eliminating his top-position aspirations. He does take my Butt-Slide trophy for the day, along with a special mention for that bike-vaulting performance. Such Saffer grace!

Deniz! You didn’t crash! Not only did Öncü not crash, he ran a magnificent race. Lesson: ride well, Don’t Do Stupid Shit, and you’ll do well.

The chequered flag hailed two podium-virgins in the form of Salač and Rossi. Naturally they were ecstatic.

The middleweight battle kicked off on a dryish-but-not-quite-dry circuit. All went well, some paint was swapped, until…
Canet threw in an audition for The Human Cannonball, tearing over the gravel in the wake of his motorcycle. Trajectory: Excellent. Open Visor Over Gravel: Not so Excellent.

A little while later, Augusto was shown sat on his knees in the gravel, bikeless, with the human-mechanics rushing towads him.

Mere moments after that Manzi lost it, turning into a barrelling Italian mess of arms and legs and gravel.

Chaos ensued as Sam Lowes overestimated his own prowess, clearing off Vierge on his way off-track. Apparently they seemed to be having so much fun rolling around in the gravel that Baldassarri found it irresistable – and rushed to join them.

Next to blunder was Roberts who, in a bout of TooHot, very nearly bulldozed Bezzecchi. Although there was a gentle caress from Roberts, Bezzecchi managed to stay on track; Joe, on the other hand, did not. Instead he opted for some Reverse Backsliding into the gravel. His ride I shall give an honourary Barrel Roll award.

Did Di Giannantonio bully-punt Garzó into the gravel there? The stewards clearly didn’t like what he’d done; long lap penalty it is. Which he also blundered – and had to take a second time. Someone get him a colouring book and show him how to stay within the lines.

Turn Eight sure had it in for the Moto2 riders. A limping Lüthi was shown zombie-walking to his fallen ride, on Turn Eight.

Beaubier did the Turn Three Slide, but his motorcycle went Kamikaze-Sliding through the pack. By some Moto-racing fairy action no other riders got collected by the rogue bike.

Having survived the carnage Raúl Fernández nicked a well-deserved win, followed closely by Gardner, and Bezzecchi swooped into third.

The main race was where the French weather decided it was about time to throw a watery spanner in the works. First it was dry; awesome! We go on slicky tyres… The race had barely begun when the skies darkened and the heavens wept softly unto the circuit – causing just a little bit of havoc.
We didn’t complain; the race was brilliantly entertaining!

Today was looking like Marc’s day from the start; but it was not to be. Two muchly-right-arm-clattering crashes happened before he called it a day. Everyone knows Marc has a permanent grin etched onto his face – come victory or defeat, point the cameras at the elder Márquez and you’d receive a white-toothed smile miles wide.
It was not so this time. He instead opted to retreat to the back, out of sight of prying camera lenses.

Let’s talk Miller though – his victory two weeks ago had given the Aussie that desperately needed injection of YesICan. Holy kangaroo hops mate, he annihilated that race! He’d best slow down; the Australian populace have only just recovered from the last win-induced hangover. Not a sober Aussie at work on Monday. Not a one.

Who knew Morbidelli was into farming? He did a stellar plough-job in that gravel trap before tapping out. Clutching his knee with gloved hands, Morbidelli reminded of a downed footballer – difference being that he was certainly in actual agony.

Brad struggled, but kept his cool and stayed on his wheels, completing the race down in thirteenth. Which is preferable over a DNF.

Then it rained. And it winded. White flags waved. Miller went Motocrossing. Breaths were held…

Chaos! My sadistic inner voice shrieked with joy. Riders were frantically jumping from bike to bike, while others were being washed out all over the place. Fabio almost hopped onto the wrong bike. So much entertainment!

Mir crashed, sparking yet another sprint race to pit lane. I’ll give it to these guys – I own a pair of track riding boots, and running in them isn’t exactly easy. Which is understandable; their designers weren’t focused on how fast you’d be able to JOG while wearing them, now were they?

First corner out of the pits and Rins puts in an entry for Best Butt Slider, GP.

Post rain-machine-switch, Márquez (Marc, not Álex) was leading; and Jack & Pecco got nailed for exceeding the pit lane speed limit. Double long laps, the both of you! Maniacs.

T’was on Lap Eight when Marc spectacularly tumbled from the lead in a skewed ballet with his Honda.

Savadori’s Aprilia picked up a smoking habit on Lap Thirteen, looking like a chronic chainsmoker and leaving its rider stranded in DNF land. Not long after, Oliveira paid his membership to the Turn Three Sliders Club.

Sticking with Turn Three, Rins took his Suzuki gravel-diving there, making it his second – and final – crash for the race. A frustrated kick at the pebbles was shown; perfect form for a rugby dropkick that was.

By Lap Sixteen the track was no longer soaked.

Poor Aleix Espargaró. His Aprilia wanted to join its buddy, so it stopped doing the fuel-into-power-magic. His walk away from the track spoke volumes; even brushing off the consoling arm of a marshall.

With ten laps to go Marc’s bike lost it at Turn Six, flying off in a shower of sparks. Marc tumbled out of its way, onto his feet, and stomped away in frustration. That arm’s going to hurt like a female dog in the morning.

After two Long Lap Penalties and a stint of Motocrossing, Jack Miller made history by taking first place, followed by Zarco in second and Fabio in a fighting third.

It did not bucket down again on the electric racers. Which was good.

It may have been a short race, but hot damn what a race! If you skipped it, go back and watch it. It was brilliant.

Mantovani and Pons clattered out on the sighting lap; so the grid was down two bikes – and the race was down by a lap due to weather. Mantovani’s Energica even gave him a furious whack on the head with its rear tyre as if to show its irritation.

The silence on the starting grid does take some getting used to.

Overtaking happened faster than your mind could process through the first corners; nobody crashed… at first. There was nothing between the riders, the bikes coming around the turns in a wailing carbon snake. By Lap Two there were comments about the calmness of the race thus far. LOL. Don’t count your racers before they crash, or something like that.

Lap Three commenced. Aldeguer played a game of Kamikaze with Okubo. They both skittled off of the track.

Cardelús was forced to do the 24 Hours.

Through the penultimate lap the commentary was again about how it was a calmer, slower race with not a lot of risqué moves… On the final lap overtaking mayhem ensued.

I pass you, you pass me, please let there be no crashing…
Granado on Zaccone, Zaccone on Granado, Granado back again. And so on and so forth. It was brilliant race-chaos and by some miracle nobody crashed.

On the checkered flag it was Granado who managed to win the game of Yo-Yo, claiming the victory with Zaccone having to settle for second; Casadei nicked the final podium step.

So, to conclude this stupendously long “summation” – Le Mans delivered some excellent racing. Everyone will be pumped up on adrenaline for the next few days.
Italy, it’s your turn next.