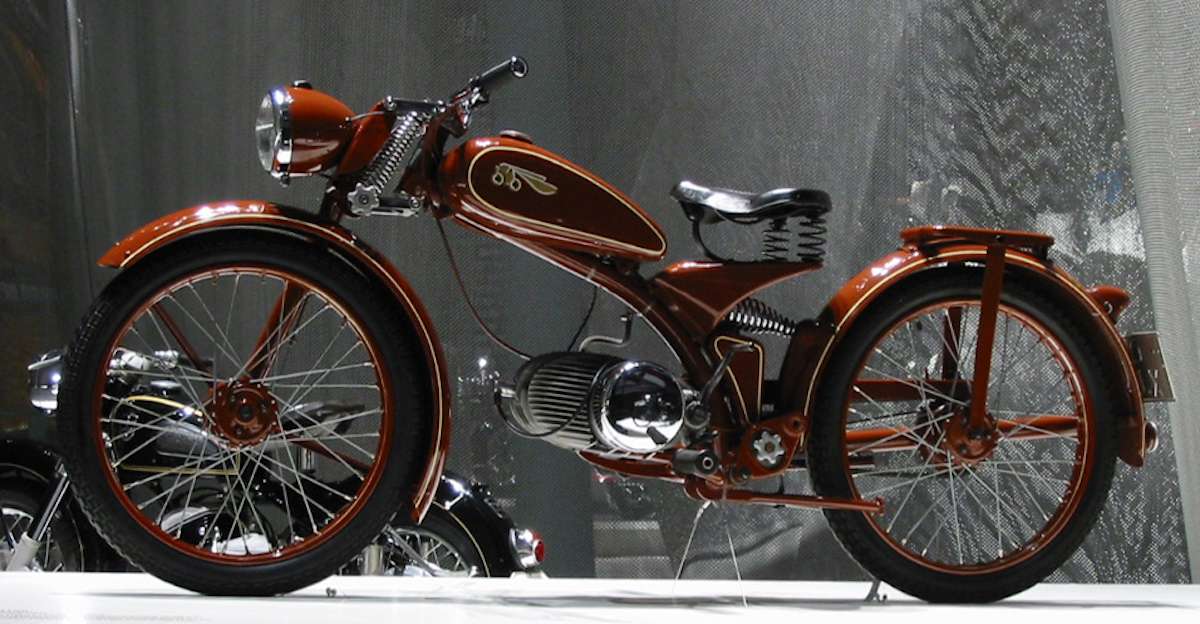 No, that’s not a typo. Although I would not mind at all if someone would give me R100…

There once lived a man by the name of Norbert Riedel, who looked around post-WW2 Germany and mumbled: ‘Wir brauchen ein besseres Motorrad!’ So, he set about developing a better motorcycle.

Now, mister Riedel was an engineer, and had designed a starter motor for the Luftwaffe during the war which was such hot property, that the US army gladly equipped his bike-building experiment in order to get their hands on it.

Equipment aside, post-war Germany was quite low on materials for such endeavours – all their steel factories had been blown to smithereens. I’d like to believe that this shortage inspired a lot of the ingenious quirks mentioned below.

What he ended up creating was the Imme R100, a truly spectacular work of engineering art.

This curvaceous late ‘40s beauty got its 3.3KW of grunt from a 99cc, single cylinder, monobloc, piston-ported two-stroke engine. Combined with its three-speed gearbox it formed something they called a ‘power egg’; no trophy for guessing where they got that idea from.

This egg was nestled atop the single-sided swingarm, ahead of its pivot point where it joined forces with the elegant arch of its the tubular spine.

The front fork was also an unusual piece of work – being a single-sided girder-type, can you still call it a ‘fork’? I’m curious. It’s more of a peg-leg, if you ask me. A sexy peg-leg.

These two one-sided items held the interchangeable front and rear wheels in place. There was even an optional spare wheel which could be mounted to the left of the rear wheel. Power was delivered to the rear wheel via a drive shaft which was suspended only on one side. (Make a note of this little detail…)

It had three gears – with first in the middle, second down and third up… Where’s neutral? What neutral? Neutral is for losers.

By now, you have probably studied the attached photo of the Imme R100 to some degree, and perhaps you’ve noticed something was amiss. Did you see an exhaust? (Those who know the Imme, sit your asses down, and shut your pieholes.)

If you didn’t notice that amissedness before, you’ve definitely gone back and looked for it now. Well? If you say there is no typical exhaust pipe, then you’d be right.

Remember that single-sided swingarm… made of pipe? That’s the exhaust. The swingarm is quite literally also the exhaust pipe. How cool is that?

The initial, basic R100s were made for the German market, and you could have it in oxide red and… well, oxide red. They had no passenger seat standard – that was an optional extra. They sold them from 1948 for 775 Deutschmark. *Battery not included.

No, seriously. The battery wasn’t included in the purchase price. Neither was the centre stand, nor the tachometer.

In 1950 they introduced an ‘Export’ version – for which you would pay 885 Deutschmark. At least on this model you got a battery. And a few other goodies such as a speedometer, electric horn (ooohhh), centre stand and a more comfortable seat.

But wait, there’s more! You could even choose a colour that wasn’t oxide red! And you got chrome, and pinstriping! So fancy.

The Imme R100 was a decent seller, but they had begun developing issues; remember that crankshaft with just one side suspended? Yeah; that bearing was not happy with its workload. On top of that, the freewheel for the kickstarter decided to join the problem-party.

By 1950 Riedel had fixed the crank-crunk by replacing it with a more conventional double-bearinged item, but it was too late.

Since the R100 was a low-cost, low profit item, the warranty repair costs began overpowering their profits. By the end of 1950, Riedel went bankrupt.

‘What’s with the name, by the way?’ You ask? Well, some interpretations vary. Imme is a German word for ‘bee’, something Riedel incorporated into his company logo, which looked like a bee on wheels, going considerably faster than the max speed of the Imme motorcycles, which was around… uh… it appears nobody ever bothered to write that down.

The R100 itself looked like it was galloping at full tilt, even while standing dead still.

It was a design too far ahead for its time. But it’s still a darned beauty.

Around 12000 of the R100 were built; a rebadged R100, named the ‘Golbi’, was showed at the Brussels Motor Show in ’49 – and was never seen or heard of again. Riedel had started development on a 150cc version as well, but this, too, never made it onto the production line.

The 1950 Brussels Motor Show saw a pair of his & hers mopeds being showcased by Riedel; named ‘Zircon’, they appear to have followed the Golbi into the nether.

This Riedel guy was busy! In ’49 he unveiled a scooter called the Till, and a handful made it into production. They had the same engine as the R100; but apparently there was one built with the elusive R150 motor…

After bankruptcy, Riedel also did some work for Triumph.

And as it befits a badass bike builder, he died not in a mundane way – he left this world via an avalanche. Literally.

However short-lived, the Imme R100 will remain a classic German lady which would complement any true collector’s ensemble.