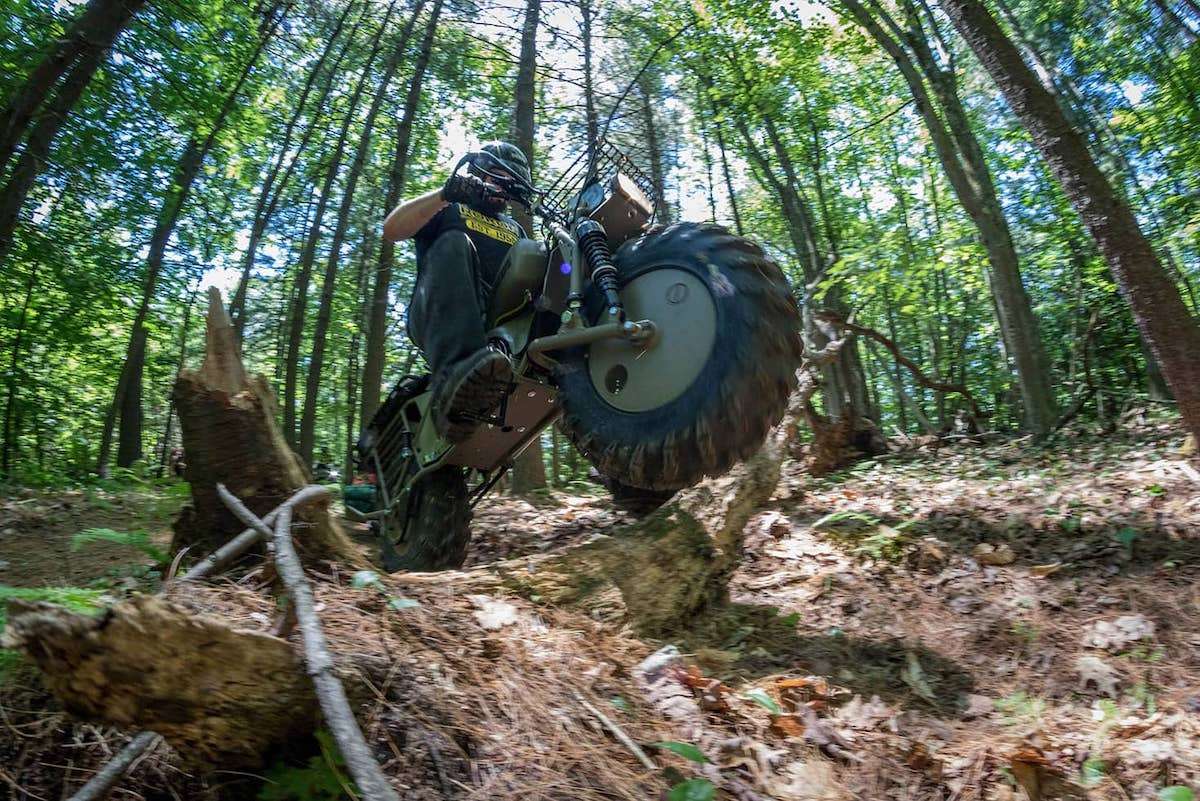 Just about every one of us had one – those rumbling, neighbour-irking three-wheeled plastic bikes. Some of you might’ve had a two-wheeled version. Fewer wheels did not equal less noise, however.

And we loved them! I, for one, rode mine until it split in half. T’was a sad, sad day…

Now you’re an adult, but the memory of your childhood go-everywhere steed still haunts you endlessly. What do you do?

These highly customisable, two-wheel-drive mini-tanks are built by Rokon; in fact, they’ve been churning them out since around 1963, although Rokon only bought the manufacturing rights to the Trail-Breaker in ’64.

Since then it has become common equipment within the US Armed Forces, even breaking its way into the world of forest rangers, fish and game officers all over the US of A.

Looking at the older models, you’ll notice that the suspension also reminds of ye ol’ plastic bike. Meaning there ain’t any. If your behind just cried out in anticipated agony, fear not. The latest models do have some fancy suspension bits they’ve called AutoGrab, and according to them it provides a smooth ride over any terrain… I’d love to test the credibility of this statement. Anyone got a Trail-Breaker I could review?

The likelihood of spotting one of these on local soil is near zero; you have to buy them in America, with American money to the tune of $8 475. That’s a hair over R122 000, which I don’t consider excessive. I mean, it can climb sixty-degree inclines. And it FLOATS.

Floats?! Hell yeah, it can float. Those tractor-tyred wheels are hollow, and floating ain’t their only party trick. You see, much like your plastic tank of yore, those drum-wheels can store up to two-and-a-half gallons of water. Or fuel, if you wanted. That’s nearly ten litres of extra go-juice on hand, without even hooking up a couple of jerry cans.

You may not be going anywhere fast, but no matter where ‘anywhere’ is located, it WILL get you there. Those sixty-degree inclines will likely be done at half-a-mile per hour, with the ants overtaking you while cursing you for holding them up. But on other, less upwardy surfaces modern Trail-Breakers could potentially reach 35mph.

Since it’s not technically road-legal (and considering the terrain it thrives within), 35mph is plenty fast.

If your childlike heart desires something you could chug down the road on without the po-po man handing you a hefty fine, then you’re in luck! Simply opt for the Ranger, the Trail-Breaker’s road-legal sibling.

Need to haul the missus’ luggage along? No problem! Rokon claims a two-thousand-pound towing capacity; they even have a single-track trailer as an option. Need to take the missus as well? Simply add the sidecar option to your checkout list, too.

For those among us with slightly more exotic haul-needs, they offer a log-skidder. Perfect for dragging bodies into unreachable spots… Hypothetically speaking, of course.

What joins the 200cc, single-cylinder Kohler engine to the wheels? Chain, belt or shaft? Yes.

Don’t look so befuddled; they use a magnificent combination of all three to get that immense 11.4Nm and 7hp to the wheels. Do not ask me how this works. It obviously works well, or they wouldn’t be building them for over sixty years with, honestly, very little changes.

One might think the numbers quite small, but this baby weighs a whole 218lbs, or in ‘normal people’ terms, a small steak below 99kg. This thing almost weighs the same as me!

Given the fact that it’s completely ridiculous, looks like the grown-up version of my beloved plastic ride-on and can go just about anywhere it bloody well pleases, it’s going on my list of Sh*t to Buy When I’m Rich. In black, of course.