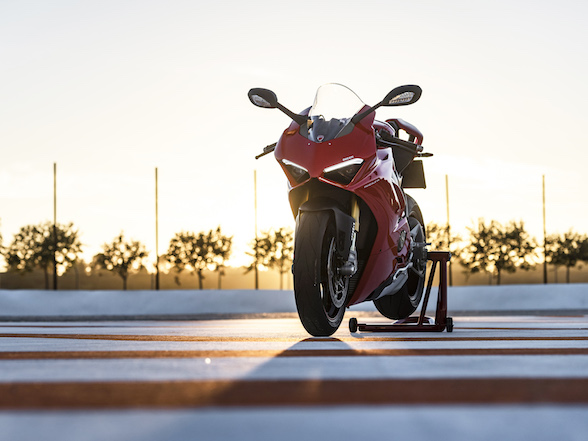 Peter Piegl is a published author and a superbike nut. He is also the most honest motorcycle reviewer that has ever been inflicted on the poor, unsuspecting motorcycle world. His next victim is the Ducati Panigale V4S. Mat and Donovan have each done reviews of this bike and loved its performance and character. Will the honest reviewer agree?

While the Italians didn’t invent art, one might argue that they perfected it. From the sublime and haunting offerings of Caravaggio, to Michelangelo, Da Vinci, Raphael and Botticelli, our pasta-quaffing friends have peddled in the exalted with unrivalled success.

But I’d argue that bringing the world timeless masterpieces isn’t their greatest feat. In fact, I’d say those achievements were eclipsed by one specific Italian company – Ducati. Their stock-in-trade is a little bit more alchemical, shall we call it, as they’ve offered the world nothing less than… magic. 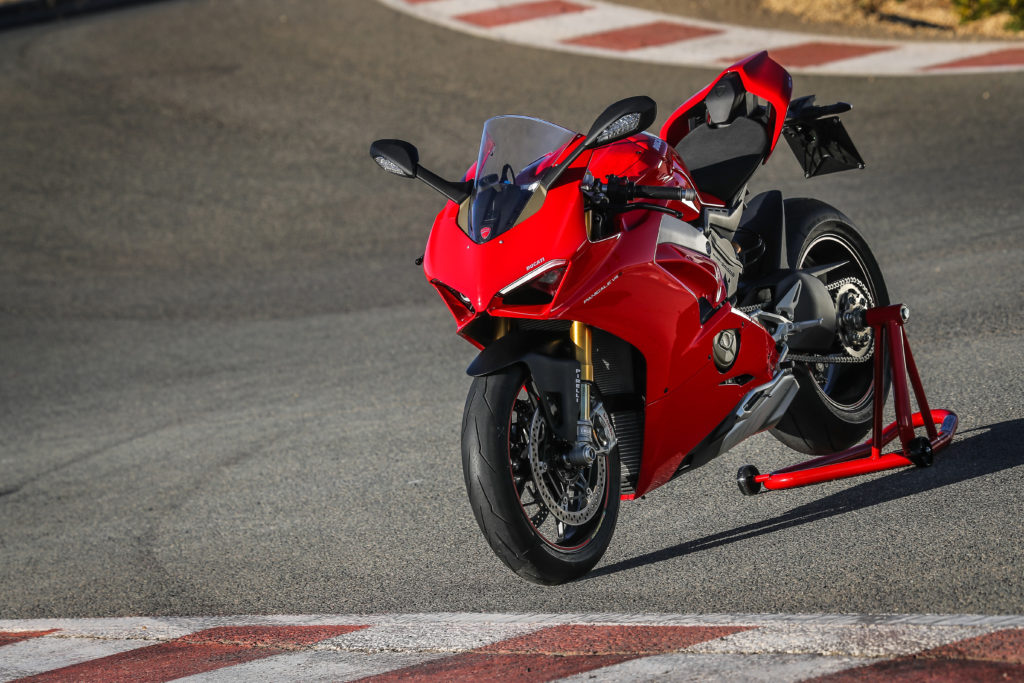 It’s the only way I can explain the fact that people will pay exorbitant amounts of money for motorbikes with severe “character flaws”. Yet somehow, imperfection has been woven into the fabric of Ducati’s mystique and, rather than being seen as objectionable, it’s become a necessity. What further astonishes me is that they’ve done so despite having been taken over by Audi, who are German and therefore clearly poster children for Obsessive-Compulsive Disorder.

Add to this the fact that keeping a Ducati in running order could deplete even Sol Kerzner’s formidable resources, and you’d think people would run screaming for the safety of a Honda or Suzuki. But you’d be wrong. And if you don’t believe me, make a turn past Ducati’s head office in Randburg on any given Saturday. There you’ll see wide-eyed, financially-challenged sycophants floating alongside flamboyantly coiffured gentlemen with bejeweled trophy wives clinging to their wizened appendage.

There’s a magnetism to the brand that attracts consumers with its recipe of scarceness, sex appeal and sheer performance. I know this because I had the privilege of testing the new Panigale V4S, and I’m still haunted by it. This four-stroke doesn’t accelerate so much as bend the laws of physics, and it seems to attract the Earth to it rather than just having good grip and handling. It’s intoxicating. I glutted myself at the teat and then asked for seconds and I’m not ashamed to admit it. That front-end feel alone would’ve seen me sell my cornea. 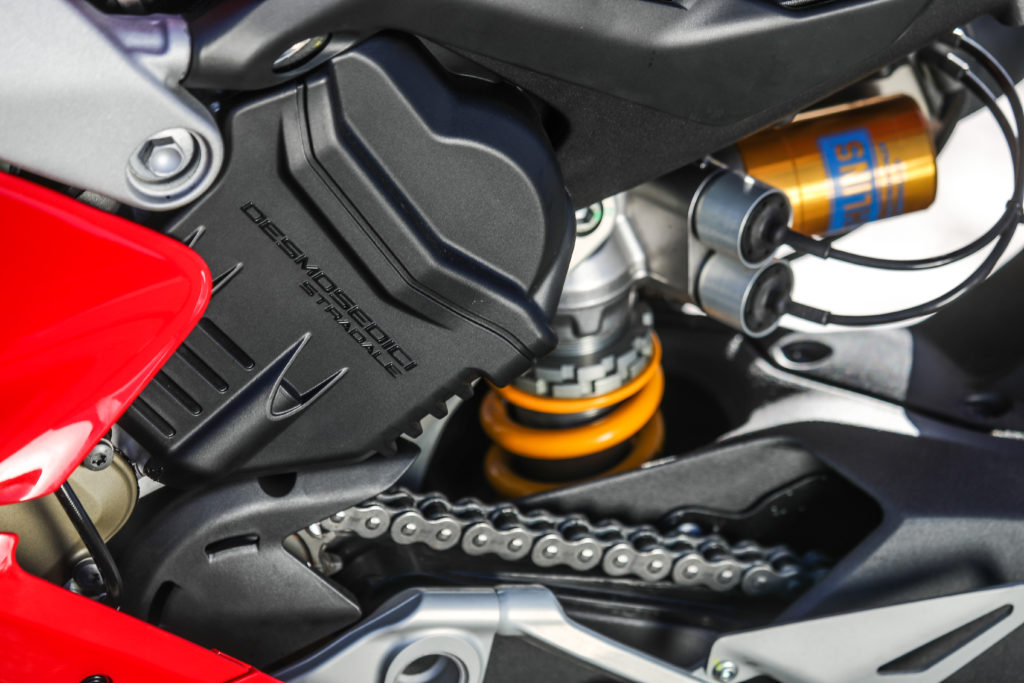 Simply put, that’s the allure of the V4S. When it does something well, it shames the competition into obscurity. But when the Panigale makes a hash of it, it does so with all the gusto of Charlie Sheen self-immolating. Not that you’d read about it anywhere – scour the interweb and you won’t find a single mention of what I’m about to reveal. Such is the power of the Italian marque’s sorcery.

At full chat (and I’m not talking top speed, mind), the battering you’ll receive from the elements would make Chris Brown proud. That windscreen might as well be an ornament for all its effectiveness and it makes the cockpit a wild place to spend time.

You’ll also be called upon to think – and react – far sooner than you normally would, thanks to the much-vaunted-yet-ineffective Brembo Stylema brake calipers. Brembo claim that, “Compared to previous calipers, Stylema®has less volume around the pistons and brake pads, reducing the internal space occupied by brake fluid, to offer a more immediate response“. Now I know that this unfortunate V4S fell into the sacrilegious hands of many journo’s before I took my turn, but I can’t believe that in just 3 500km, these Brembo’s were stripped of all capability. There was little initial bite and it made riding the V4S feel unsafe.

Caveat: I will, at this point, say that when I review a bike, I take it on its merits at that particular time. If manufacturers don’t test or maintain them regularly, or if the bikes are abused, unfortunately I can’t speculate on what might have been. So a brand-new V4S might have incredible anchors but that certainly wasn’t the case with this test bike. I’m going to add here that I’m a huge fan of Brembo’s – my own bike is shod with them and they’ve saved my ass several times.

In stark contrast to the anchors are the bike’s Öhlins suspension with Smart EC 2.0. I can sum up the effect of these in three words: instant Casey Stoner. Not only does the V4S track better than any bike in the known universe, the suspension absorbs bumps like a redheaded Irish Traveler (that’s PC-talk for Gypsy). Oh and I mention Casey specifically because the V4S also allows you to “back it in” thanks to skid control controlled via the rear ABS. And no, I didn’t try this feature.

Ducati claim that the Panigale V4S is a well-mannered bike that you can live with every day. Yes and wholeheartedly no. The beast certainly has better manners than its predecessor but only a eunuch could use the V4S regularly. For the rest of us, those who have testicles or ovum, scorching your respective eggs will begin in T-minus aaaaaaaaaarrrrgggghhhh!

I think they forgot to mention it in the spec sheet that Satan’s Sauna is built-in under the seat. For me, this alone would be a dealbreaker as I ride all year round and I’d be mightily pissed off at having to wear asbestos-lined nappies after dropping R359 900 on a bike.

While on the subject of moolah, you’ll also be faced with a mortifying bill of R13,278 every
24,000km when you do your valve clearance inspections. And that’s if nothing else needs replacing (front brakes come in at R3,881 and rear at R1,232). Oh and tyres will probably cost you more as the V4 range is now shod with brand-new 200/60 profile rubber. But at least the first two services are free, say Ducati (you save R5 191), and they’ll even throw in a pillion seat and pegs so your better half can also cook his/her innards. 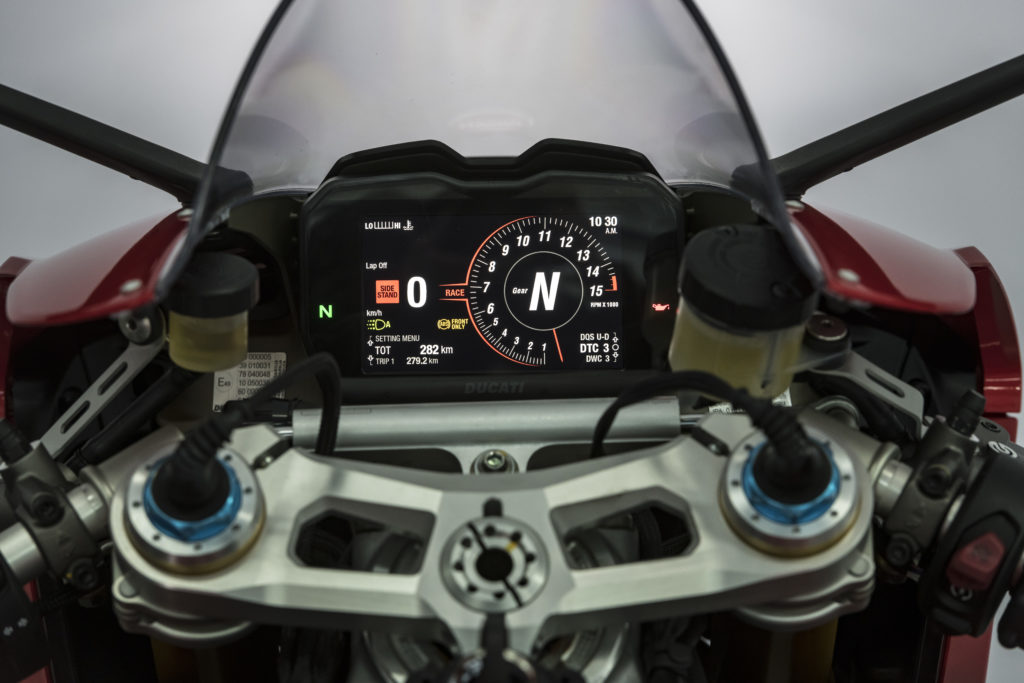 But chances are, you’ll be shredding atoms on your own – as the gods intended. The V4S is in its element in the twisties but the track is its natural habitat. As you’d expect from a pedigreed race machine, you can customise virtually every aspect of the its performance. And the system is idiot-proof. Fire up the mesmerising dash and make your changes with the slider – you’ll see the arrow meander from “safe” to “performance” so there’s no doubt about what to expect. Yet despite having more electronics than it takes to land a shuttle on Uranus, you will not – I repeat, NOT – get a fuel gauge or range indicator. I need to take a moment…

OK I’m back. The ergo’s on the Panigale make for pretty comfortable riding (boiling bollocks notwithstanding). And streaking off into the sunset takes on a poetic undertone as you’ll never look back. Mainly because you can’t. The mirrors vibrate so badly that you’d be better served just chucking them and paying whatever fine the Bacon Brigade see fit to inflict.

They’ll probably want to fine you anyway thanks to a tumultuously loud exhaust, which bellows in quite an agricultural manner. And this allows us to neatly segue into the topic of the idling, which was undoubtable set by John Deere, who probably also had a hand in the erratic throttle mapping. And perhaps the downshifter too. Nothing will wake you up faster than swan divinginto a corner in the wrong gear, because the capricious system decided this whole “changing gears” thing was above its pay grade.

And I’m going to remind you here that this bike, which costs more that some peoples’ annual salary, had only 3,500km on the clock at the time. With all these faults, the Ducati Panigale V4S just doesn’t feel premium to me – not even the clever lights that illuminate the tail section in saucy red can erase its shortcomings. But you’ll never hear the likes of the above uttered – or if you do, it will be accompanied by a shrug, a wry smile and a “Well, that’s Ducati for you”.

God, I miss this motorcycle.