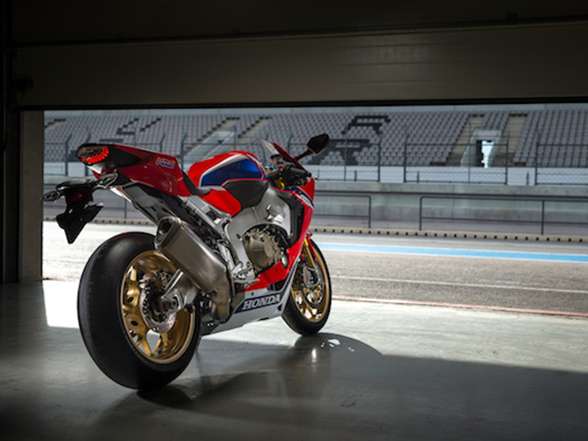 Honda held the world launch of their long awaited 2017 CBR1000RR Fireblade, both the standard and SP models, at the challenging Portimao circuit in Portugal, and Donovan Fourie went to have a looksee.

For the 2017 ‘Blade, Honda has reinforced their 25 year-old “Total Control” principle, the one established by genius project leader Tadao Baba who, while developing the “CBR750RR” to take part in the then prevalent 750cc class, cast off the shackles of racing regulations and current convention, and instead installed an 893cc engine in his 750cc chassis, creating a hybrid of middleweight handling and heavyweight power. With this, the original CBR900RR Fireblade was born. Since then, it has adopted various upgrades and revisions, including the installation of a 1000cc engine in 2004, the same capacity it has maintained ever since. Now, nine years since the last upgrade we see another revamp, with 90% of the components changed, and one that would make Baba-san deeply proud.

What made the original 1992 ‘Blade famous was not earth shattering power, but the fact that it had big bike power at the weight and dimensions of a nippy 750, giving it the best of both worlds. Now, in 2017, this ethos is being returned, and thus the engineers at Honda did not spend their time merely figuring out how best to bleed every last drop of horsepower from the engine, but rather how to put a good engine in a chassis that really works. The major key to doing this, and the one Baba-san used on the original, is to gently carve off every single ounce of unnecessary weight, and it has worked – the 2017 model stands in the pitlane with full tank and every other drop of life blood at 196 kg (195 kg for the SP). That is 15 kg lighter than its predecessor, and made even more impressive by the fat that this machine is also Euro4 compliant, meaning it has to carry huge lumps of emission control and noise regulations, so the engineers actually had to chop more than 20 kg off the predecessor to get to this figure.

They did it by making some obvious and big changes, such as installing a titanium exhaust silencer (losing 2.8 kg), a lighter ABS system, and the engine covers and sump guard are now magnesium, plus the SP model has a lighter lithium battery and, a first on a production bike, a titanium fuel tank. But this is a good way of losing maybe six kilograms. Losing the rest involved a compulsive level of detail. It involved engineers getting their microscopes out and inspecting every bolt throughout the bike to see how much could be shaved off the lengths of each without endangering their role. Each radiator hose was made slightly thinner, the plastics were made thinner, each wall, each component was inspected and every gram was shaved off. In the end, we have a finished unit that despite being Euro4 is 15 kg lighter.

More so, the entire bike is narrower, more compact. The radiator has been made smaller, with more condensed fins to counteract the extra cooling required. The fairing is smaller and more aerodynamic, with a modified screen and ducts in the side fairing that keep the air away from the head and legs. The top view of the bike shows a profile that is more hourglass shaped, making it narrower in the middle giving the rider more room to move and keeping it yet more compact. The main and sub frame have been redesigned and knock off a further 1,3 kg, plus the main frame has 10% more torsional flex, while the new lighter subframe offers 10% more rigidity.

But the Fireblade ethos is not only about having a light weight and a good chassis, but having all this concocted with a powerful engine. The motor on the new Fireblade has been completely revised – new pistons mean that the compression ration is up from 12.3:1 to 13:1. Also, it has new conrods, a new cylinder head, a new camshaft and new valves, the latter few additions contributing to more valve lift and new valve timing. The intake system is also new, with the bore increased by 2 mm boosting it to 48mm and is connected to a redesigned airbox. The result is that the rev limiter has been increased from 12,250 rpm to 13,000 rpm. Put everything together, and you will find an engine that has 11 hp more than its predecessor, with a tally of 189 hp and 114 Nm of torque.

Obviously Honda couldn’t possibly call this a modern superbike without throwing an entire IT department at it, and they have done exactly thus. This is the first four-cylinder Honda to be equipped with a ride-by-wire system, and is attached to the customary Inertia Measurement Unit that makes calculations every ten milliseconds and accordingly adjusts the cornering ABS, the rear wheel lift control and the HSTC, the acronym for Honda’s torque control system that acts as the traction control, the slip control and the wheelie control. It also means there are five power modes that regulate the maximum horsepower but don’t, as is the way with most power modes in other bikes, change the initial throttle response. There are also five rider modes, offering three base settings with varying power, HSTC and ABS settings, plus two User modes for the rider to pre-save their custom settings.

The SP model comes equipped with Ohlins’ Smart Electronic Control suspension that does 100 measurements every second and adjusts each setting with a choice of 100 damping levels according to the settings you punched in before the ride. There are three auto settings ranging from track, to winding road, to street that adjust the suspension according to whether you want it stiff for hard riding or comfort for easy street use. There is also full manual setup like a mechanic with a screwdriver normally does, but adjusted through the full colour dash. More so, for those not equipped with mechanical knowhow of suspension, there is a setup aid option where you adjust the suspension according to where you are having difficulty, for example you can adjust the suspension to help braking, cornering or acceleration and the electronic system will automatically choose the damping setting you need.

Riding around Portimao is not easy, especially for someone who has never been there. Most of the major corners are blind, and made more blind thanks to a series of near cliffs over which the track navigates. Still, even when mistakenly turning in the wrong direction after another blind rise that looks exactly like every other bind rise on the track, it becomes immediately apparent that this bike does exactly what it says on the box. The engineers say it’s light and compact, and that is exactly how it feels. It’s small, bordering cramped, and reaches levels of agility that is now encroaching on the territory of 600s. The multiple tight hairpins would normally be the bane of a 1000cc superbike’s existence, yet the ‘Blade takes them in its stride, tipping in effortlessly and holding the line perfectly, even while on the standard Bridgestone S21 road tyres that held up better than most race tyres from ten years ago would have. The motor is strong, but perhaps not quite as brutal as the likes of the S1000RR and ZX-10R, but more kick when opening the throttle might detract from the easy handling and ruining the feel Honda was aiming for. There is dollops of midrange, and it comes in smooth and controllably, aided by a barrage of electronics, all culminating in a package that is precise, sharp and deadly to those who think they can overcome it with mere horsepower. Obviously, the straightline speed part is only a feeling, and we could be completely wrong when we do put the ‘Blade back to back with some of the competition, but any perceived losses in straightline performance are massively outweighed by a truly sublime chassis, one that is worthy of the legend that is “Fireblade”.