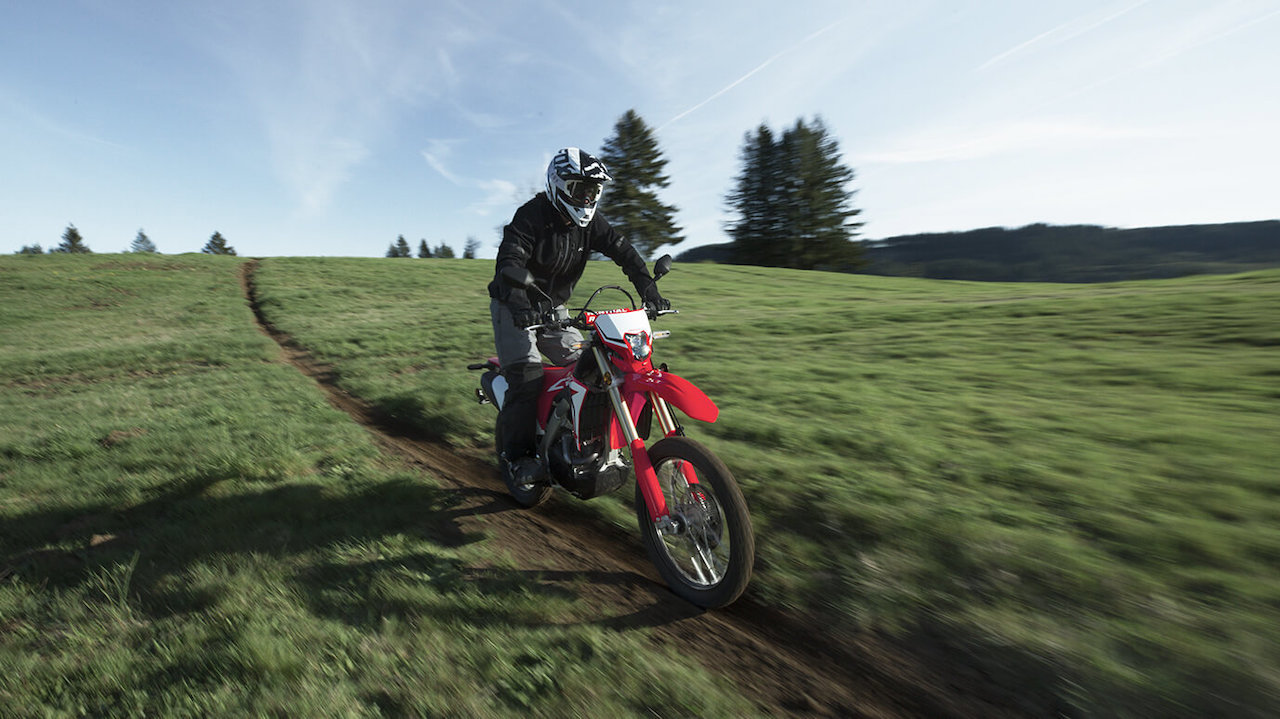 Story: Harry Fisher
We perform a lot of bike tests on The Bike Show, and it would be fair to say that, in many of them, we come to similar conclusions as other bike testers around the world. A certain amount of subjectivity creeps in but, generally, we agree with each other.

When we first heard about the Honda CRF450L, a road-legal version of the CRF450 range, there was a lot of excitement. We’d previously tested the CRF250L whose performance was really too weedy to be of any use to anyone.

Therefore, the 450cc motor was going to redress this imbalance and give the bike the performance it both needed and deserved. Reading reports from around the world, the verdict was good, and it seemed as if our prayers had been answered.

Well, I’m going to fly in the face of popular opinion and disagree with everyone.

First up, let’s be clear about one thing; this isn’t an adventure bike, as some people have claimed. It’s what we used to call a trails bike; a road legal off-roader, which is exactly what it looks like. Ride to the countryside and then turn sharp left or right into the veld and have a bit of fun. 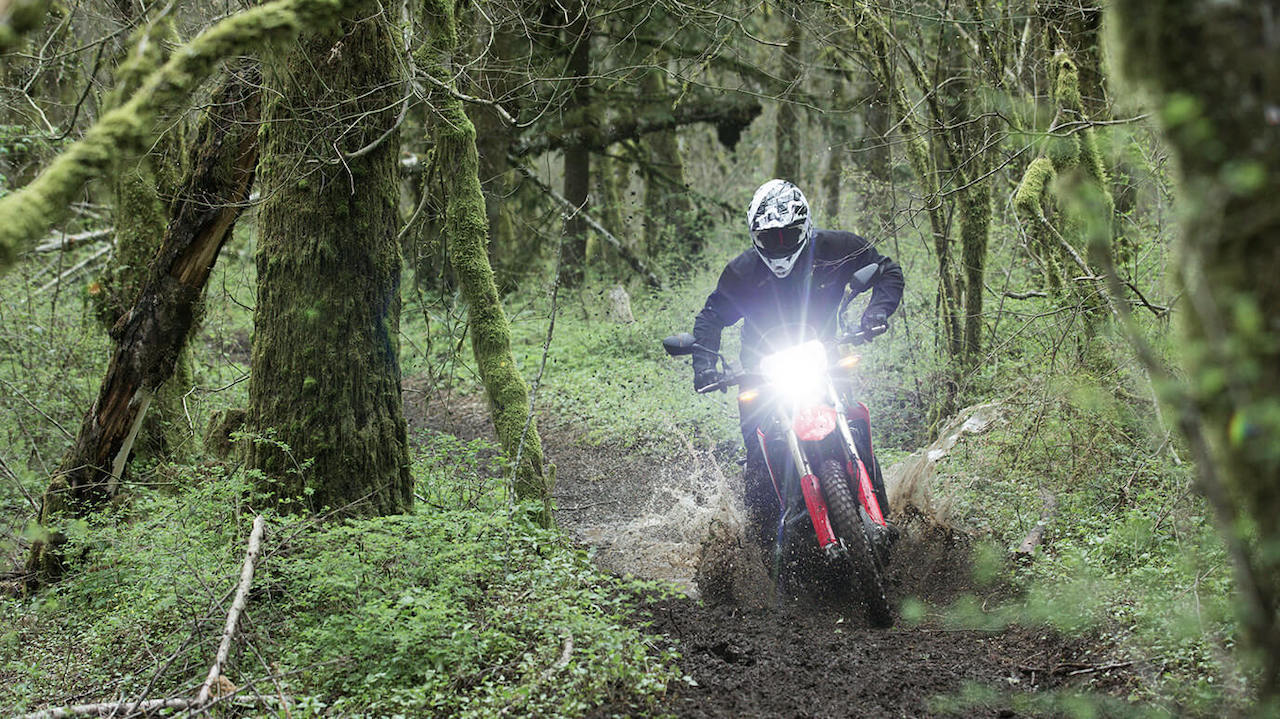 So far, so good; road and off-road use; nifty. And it looks good, too; tall and purposeful, just like it should. But then I’m afraid it starts to go downhill. Get up close, and it is all very plasticky and not really all that sturdy; it feels a bit cheap when, in actual fact, it isn’t cheap at all.

Swing a leg over it – you do have to be tall – and reveal the next problem; the seat. It is one of the most uncomfortable seats ever fitted to a road-going motorcycle. The Spanish Inquisition could have put it to good use! Oh, I know that in off-road, you are likely standing more than sitting but I bet that this is going to be used on the road more than off and, for that, the seat is totally impractical. My arse is still recovering after a week riding the bike!

Next problem; press the starter button and wait for the engine to catch, only you sort of wish it hadn’t, as it sounds really puny and uninspiring with a pretty nasty exhaust note. Which leads to the next problem; the performance or, rather, the lack of it; it can barely get out of its own way. In America, reports suggest that the single-cylinder engine produces around 45bhp, which would be plenty and could help you overlook some of the previous criticisms.

However, in South Africa, we are getting a European version, which means you get about 24bhp, which is maybe ONE bhp more than the 250. ONE! It gives the bike such tame performance that you really cannot forgive it any of the other criticisms.

Of which, I’m afraid, there are more! The petrol tank holds 7-litres of fuel, which isn’t going to get you very far, especially as you have to wring its neck everywhere to get anywhere. The headlight is one of the worst I have had the displeasure of sitting behind; it has the oddest beam pattern and just doesn’t light up anything very well. The brakes are pretty weak, and there is no ABS, and the suspension is far too soft for road use; if you get anywhere near the bike’s top speed on a straight, it can feel a little alarming.

Sorry, Honda, still not done; the CRF250L gets a 2-year warranty and has 12,000km service intervals. It costs R75,000. The CRF450L  gets a 3-month warranty, and you’ll need an oil change every…..wait for it….. 1000km. I can understand that distance if it was being used solely off-road on weekends, but for a bike that might be used every day of the week, it’s just not possible. 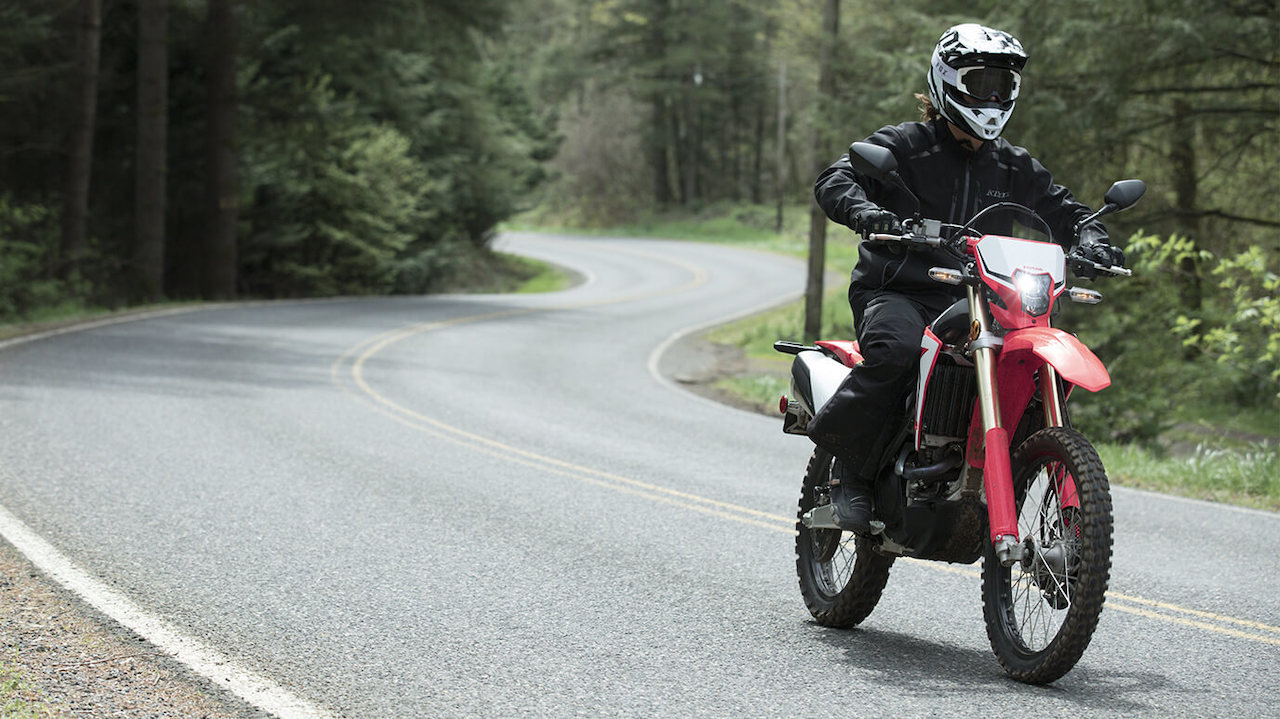 Is it all bad? No. Show the CRF450L a bit of off-road, and a lot of the criticisms fall away. No, it’s still not very powerful, but there’s enough to have fun; the suspension comes into its own, and the seat ceases to be a problem. But, in truth, how many people are going to take a R125,000 bike – a street bike at that – and throw it around in the dirt, no matter how much fun. For fun it is; it’s a really un-intimidating bike to throw around – light and nimble – although you would be well advised to invest in a set of hand-guards.

To make matters worse for Honda, they’ve kind of shot themselves in the foot by having another bike in the 450cc range arrive at the same time; the CRF450RX. As you can see, it’s not road legal, but straight away, it looks like it means business. And, when you fire it up, kick it into gear and release the clutch, all hell breaks loose! This really does have the full-fat engine, producing about 60bhp and it is a complete beast; far too much for me – off-road that is – and possibly even too much for road use with soft suspension but it does still beg the question, why did we get such a weak road version when the engine is clearly capable of so much more? Oh, and the RX costs R15,000 less than the L!

I really hate to give such a bad review to a bike, but I have to be honest. I could forgive it if it were R50,000 cheaper and I could spend R10,000 to upgrade the power and seat and still have a bargain but to spend R125,000 on a bike that is far from perfect…. Come on Honda; you can do better than that.

(Before I wrote about and filmed this bike, I did contact Honda SA to ask why we in SA got such a low-powered engine, and they said that they were well aware of the problem with the power and were working to come up with a solution. To be fair, when I first got the bike, it was very new and not really run in properly. As 1000km came up on the clock, it had loosened up quite a bit and was starting to show a bit more verve especially on acceleration. Mind you, by then, I’d need to book it in for an oil change!) 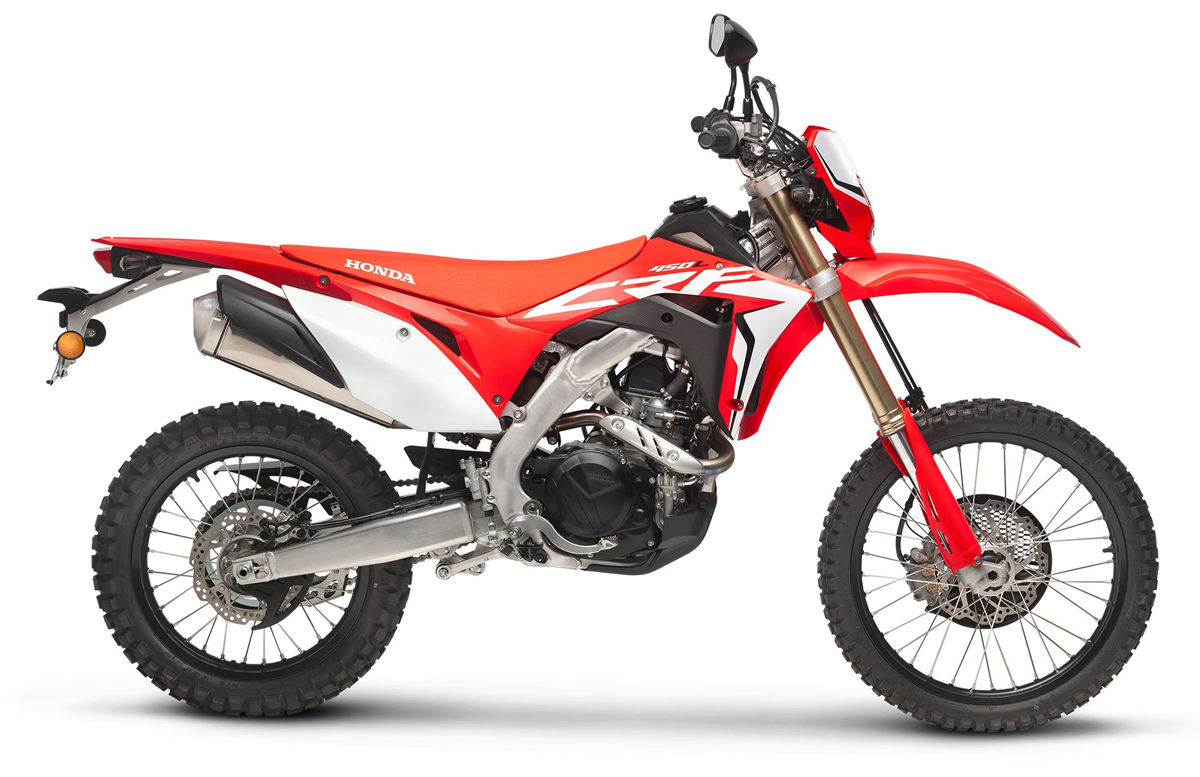