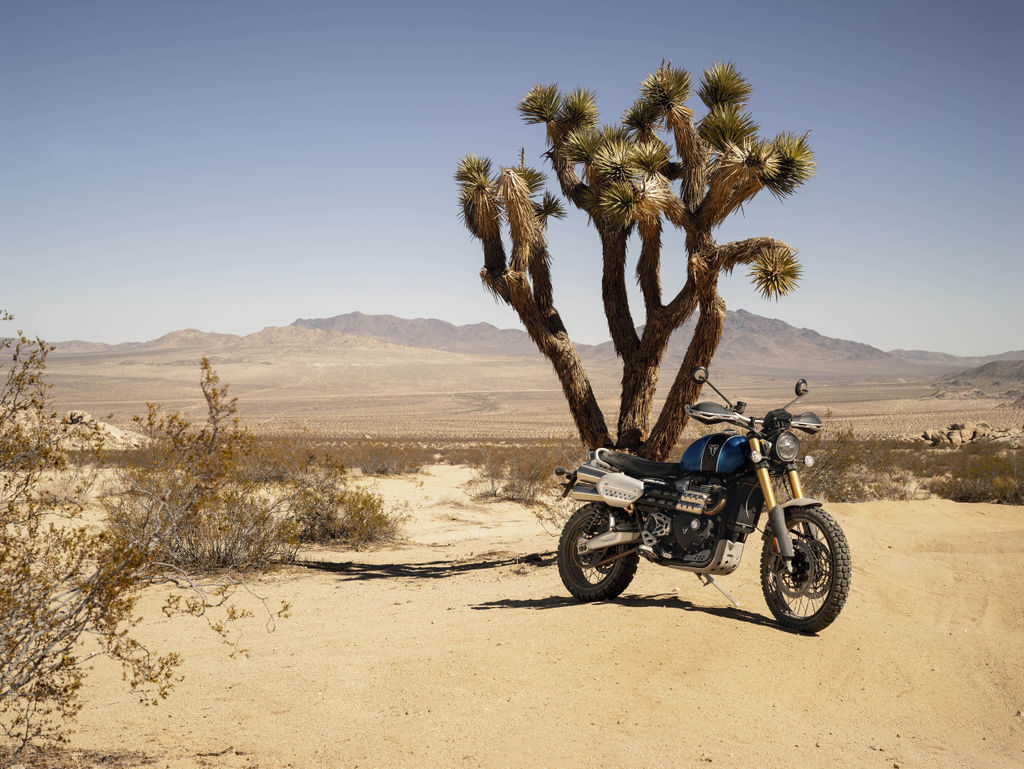 Story: Harry Fisher
Pics: Triumph Media
It is amazing how a company as young and relatively small as Triumph can innovate and set trends that all others follow. Three examples spring to mind; the retro bike, the factory cafe racer and the scrambler.

The Bonneville, Thruxton and Bonneville Scrambler copied the original bikes from the ‘50s and ‘60s and brought them back to market for a new generation of riders. Not only that, but Triumph started a trend that has been copied by everyone else. Not bad for a relative newcomer.

The thing about the people at Triumph, however, is that they might have delved into the past for inspiration on numerous occasions in their short history, but they are not afraid to bring the past bang up to date, either.

When I tested the Thruxton R a couple of years ago, I said the original model was mostly style over substance but that it had been reinvented to add an awful lot of substance to the style.

Now Triumph has done it again; this time with the Scrambler.

But hang on, what is a ‘scrambler’, that modern trend that is all the rage at the moment? Back in the mists of time, there were no speciality off-road bikes, what we would call ‘plastic bikes’ today. Manufacturers took existing production models – in Triumph’s case, the Speed Twin or Thunderbird – and created ‘off-road’ models such as the Trophy. When races around closed-circuit off-road courses came to be organised, some wag declared that it would be a ‘right old scramble’ and thus the ‘scrambler’ name was born. With the advent of the speciality enduro or motocross bike, the name went out of use.

Fast forward to 2006 and Triumph introduced the Bonneville Scrambler. It looked funky but, despite the styling and the name, it would be fair to say that it had no real off-road pretensions. In fairness, it looked very much like those original scramblers from the 1960’s.

Fast forward again to 2019 and, with the new Scrambler 1200XE, what we have here is a completely new bike that owes nothing to the previous model. Triumph has done it again and created a thoroughly modern, retro bike, which sounds like a contradiction in terms, I know, but it happens to be true.

Another way of putting it is that they have realised that looking good is not enough to stay ahead of the game. What none of us expected was that the outcome of their realisation would be this good.

So, what do we have here? Well, for the first time we have a scrambler that is more than a scrambler in name alone; basically we have an adventure bike in retro clothing, with all the ability that that implies. This is no surface glitter bike; this is proper. 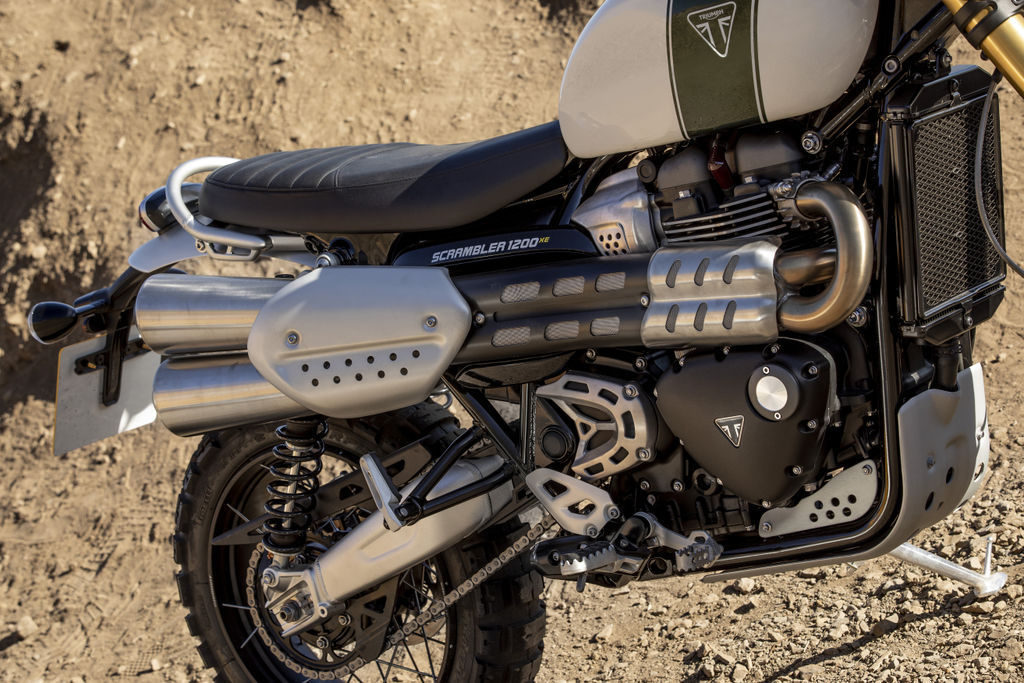 The frame is unique to the Scrambler but the engine is as found in the Thruxton, which in itself is the High Power version of the 1200cc Bonneville motor, re-worked here for more low-down grunt.

There are two models; the XC and the XE, although South Africa will only get the XE, which is fine as that is the full-fat, all singing, all dancing model. Over the XC, it has beefier, longer-travel suspension, longer wheelbase, wider handlebars, more electronics and a 21” front wheel. All these features are designed to make it as good as possible off-road.

But that doesn’t mean that Triumph has given it off-road ability at the expense of on-road fun. Quite the opposite in fact.

The 88.8 brake horsepower and 110Nm pushing along 205kg are not figures that will set the world on fire but what a wonderful piece of engineering this is, with lots of smooth grunt and a lovely soundtrack. More importantly, these are figures that translate into a performance that, while it might not be the fastest, is chock full of ear-to-ear grin-inducing fun. There is power everywhere you need it and the gearbox, although devoid of a quick shifter or auto blipper, is as sweet and smooth as anything else out there.

And don’t think that the off-road oriented suspension isn’t up to the task on tar, because it is. At the front, the Scrambler sports fully adjustable Showa forks and, at the rear, specially developed twin Ohlins shocks; again, fully adjustable. I have rarely ridden a suspension that is so perfectly tuned to the bike it is fitted to. It is firm but never jarring, while being so supple and compliant and creamy smooth. Despite the long travel, it never wallows around but soaks up road imperfections easily. Full adjustment front and back it may have, although why you would ever need to touch it from the factory settings I don’t know.

Oh, and as an aside, the suspension has 30mm more travel than a KTM 1290 Super Adventure R, which must mean something.

Everything feels so well engineered. The ride-by-wire throttle is light and smooth, as is the clutch, both of which will undoubtedly help when we get this thing onto dirt. What the XE also gives you is gyro-controlled ABS and traction control, meaning that it is lean-sensitive. Braking is handled by Brembo M50 monobloc callipers; these were the preserve of super bikes not that long ago and now here we have them on a retro scrambler; this is how seriously Triumph is taking this bike.

The beauty is in the detail as well; side-laced wheels to take tubeless Metzeler Tourance tyres, six riding modes, LED lights, illuminated switchgear, keyless ignition, cruise control, heated grips and a USB charger. Even the light-sensitive colour dash is a work of art.

There is not one jarring note on the whole bike; it looks purposeful but so stylish in a way no adventure bike has managed so far. Yes, you can pose on this bike at the cafe or pub but deep down you know that this would be a waste of such a fantastic machine.

Close examination reveals more to rejoice in. The only bits of plastic are the side panels, one of which is hidden by the high-level exhaust and the other that has huge slabs of aluminium plastered over it with the bike’s name on it. Everything else is made to last; the mudguards are brushed aluminium, the engine bash-plate is aluminium, the hand guards must be the strongest I’ve ever come across, having a thick, sculpted aluminium bar running around their length, from mounting point to mounting point. Everywhere you look, there has been thought and care not only to strength and durability but also to appearance.

There are a couple of small issues; the exhaust, although extensively covered by shrouds, does pump out a lot of heat and, when standing on the footpegs, your right leg is placed right up against it. On a hot summer’s day, this could be a problem; not dangerous but uncomfortable.

The fuel tank is a little on the small side (although on a par with other Scramblers from BMW and Ducati, which can offer no similar off-road ability); nearly 16 litres giving a range of around 200kms if you ride with spirit.

But that really is about it in the complaints department.

Hang on, I hear you saying; you’re telling us that it’s brilliant off-road, so why haven’t I proved that yet? Well, since you’re asking… 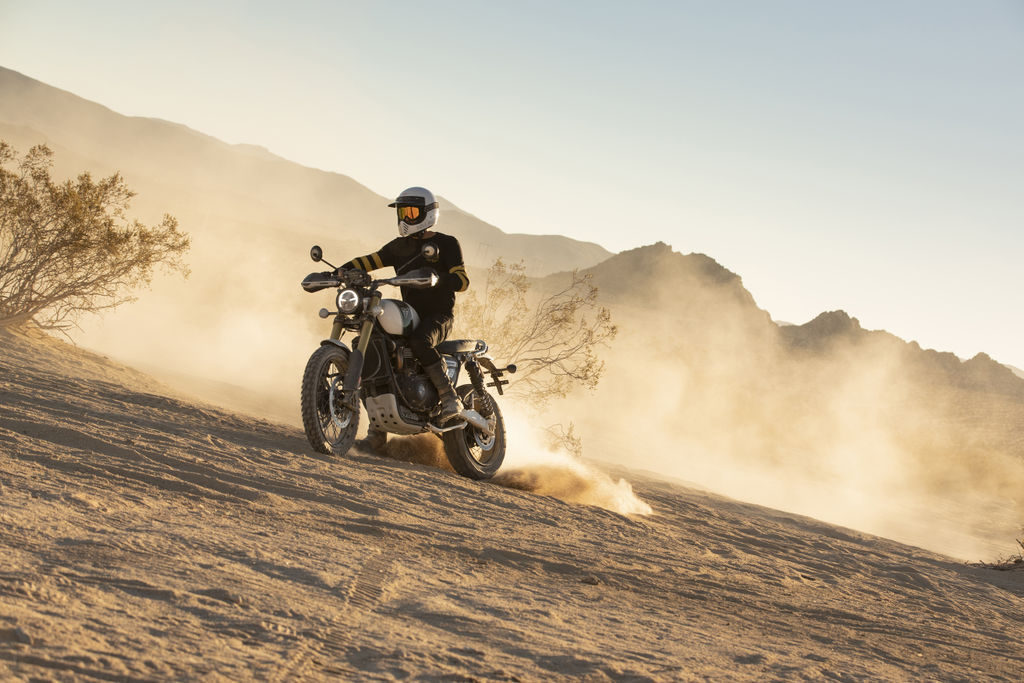 My adventure riding skills are rusty to say the least, but the Scrambler 1200XE gives so much confidence. As on tar, the suspension works beautifully, giving so much feedback and never in danger of bottoming out. The power is always there when you need it, no matter your speed or gear you are in. There is no transmission snatch whatsoever and the controls are so smooth, you feel as if you can do anything competently.

In addition to the ‘Off-Road’ riding mode, the XE also gives you ‘Off-Road Pro’ which, basically, turns the traction control and ABS off completely; the only way you can turn the ABS off, for that matter. I didn’t have the nerve to ride in this mode but Diete Engelbrecht, who runs the ADA training facility near Hartebeespoort Dam, told me that, even with everything disabled, the bike was still fully controllable. A lot of this has to do with the relative lack of weight, compared to fully-dressed adventure bikes; 205kg is not featherweight, by any means, but, when compared to the mammoth 268kg BMW R1250GS, it is a big difference.

Of course, the BMW has much greater fuel range as well as infinitely better wind protection but that does make it an imposingly large motorcycle, especially when faced with a dirt trail. The Triumph, on the other hand, feels small helped in no small part by your forward vision being completely unimpaired by bodywork or a screen. True, this does mean that there is no long-distance wind protection but if the trade-off is to improve the off-road performance, then I consider it worthwhile.

What more can I say? The new Scrambler 1200XE is as close to perfect as I think it is possible to get. It looks absolutely fantastic and goes, handles and stops as well as it looks. It has all the right components and has been designed and put together with an attention to detail that is second-to-none. I have rarely been on a bike that attracted so much attention; indeed, it was all I could do to stop looking at it whenever I parked it. The only problem I have now is finding the R205,000 needed to buy one; a price that I consider well worth paying.

Previous Post Bradley Cox signs up for top-level American race
Next Post Performance Technic Tip: Everything you should know about your helmet