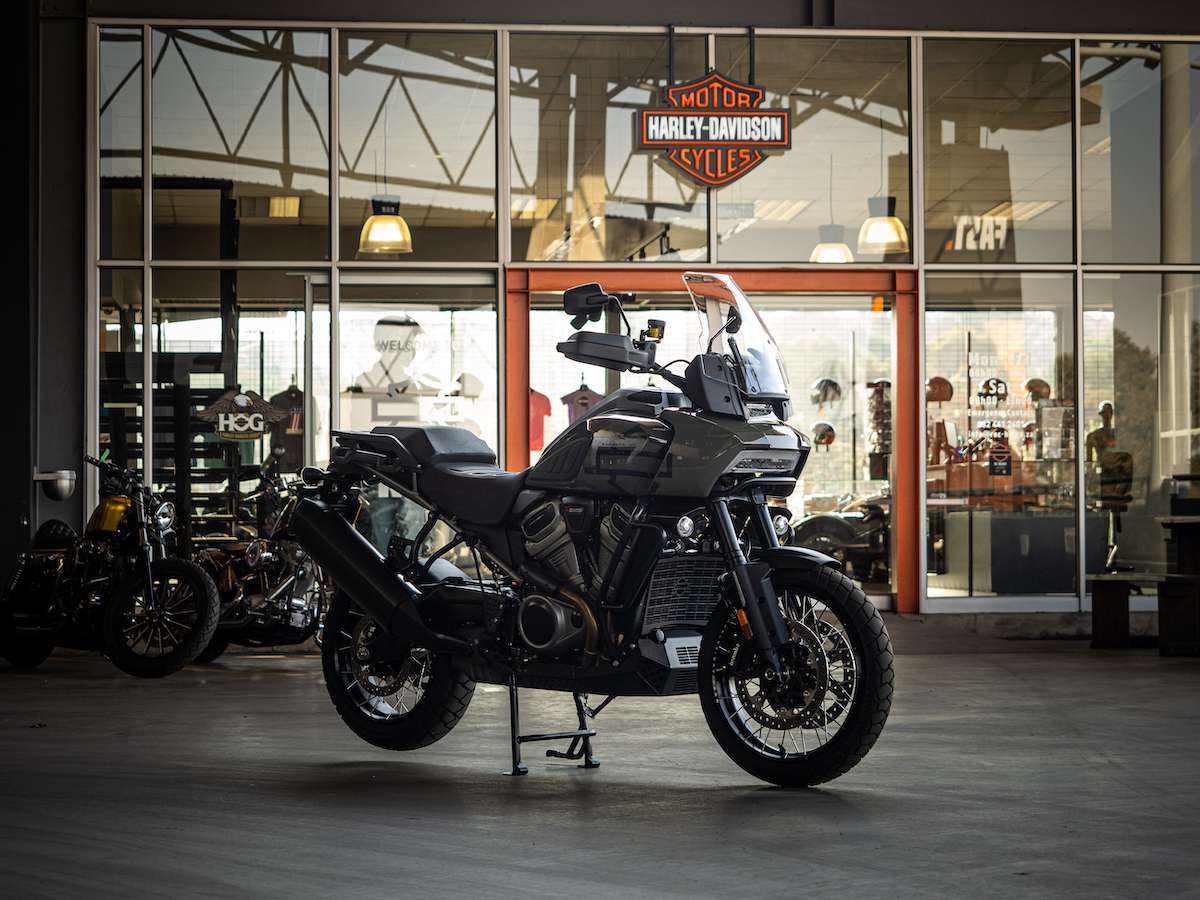 “Harley-Davidson is going to build an adventure motorcycle”, rang the news outlets at full volume.

They must be joking, we laughed. Who the hell would buy a Harley-Davidson instead of a GS, KTM or any of the other plethora of established adventure models?

We said that until Harley-Davidson released more details about the Pan America. Then the bike arrived in the flesh…

…bugger, we thought, hating ourselves for our premature mockery.

The motor is the new Revolution Max. Harley, surviving more on style than technology, is not known for its groundbreaking technological advances, yet this is as close to the innovation pinnacle as it gets.

It’s a liquid-cooled 60º V-twin hosting 1252cc of boom. More so, it has variable valve timing on both the intake and exhaust valves. With that, it boots out 150hp and 127Nm of torque, sticking the Pan Am in the same playing league as the GS and the KTM.

The advancements are not just mechanical – there’s a six-axis IMU, much like that found in the latest superbikes, guiding traction control, ABS and rider mode systems, all controlled through a TFT dash and many easy-to-use handlebar buttons. The Special version takes it all a set further with semi-active Showa suspension, a tyre pressure monitoring system, a centre stand, a rear brake pedal that clicks into a more off-roady position when required, various aluminium protective guards, adaptive headlights, handguards, heated grips and a steering damper.

Are you not impressed?

Of course, all this is not new to the world of luxury adventuring. It might be up to date but not necessarily groundbreaking. However, one feature that does add a new dimension to the technological landscape is the adaptive ride-height control. Where has this been all my life? What it does is automatically adjust the ride-height of the motorcycle, especially when coming to a halt. When battling the world’s wildernesses, adventure motorcycles require a height lofty enough to surmount the tallest peaks and delve into the deepest depths. That’s all good and well, but when the bike becomes stationary, riders of restricted stature like me have a tendency to fall over, effectively ending the adventure dream.

That’s why this system is so magnificent to a poor short person like me. It’s also a system that’s an optional extra, an optional extra that was not fitted to the demo bike before us. Curse it!

As is often the way with modern adventure motorcycles, the Pan Am may look massive from the outside, yet it’s a tiny kitten when you climb aboard. The seat height is adjustable between 830mm and 850mm, which is not bad. The seat is broad and cushy, a rarity in modern motorcycles where the in-thing seems to be seating made of luxurious plywood.

The dash is classy and sophisticated, although a touch on the busy side. The centre animation shows revs, speed and necessary details and is bright and easy to read. Surrounding the centre animation is a grid of numbers that are useful, plentiful and not within the optical spectrum of this motorcycle’s demographic without reading glasses.

The 254kg is hidden well as you toss it into turns. It doesn’t feel like 254kg, and therein lies the secret to good adventure design – weight enough to be strong but not to be noticed. The bumpy roads around Harties were eased thanks to the semi-active suspension and a seat a human being actually would want to sit on.

Of course, then there’s that motor…

We’ve joked that Harley is stuck in the Stone Age, with old thumping air-cooled twins and go “potato potato potato”. Remember those days? They feel like just yesterday.

The Revolution Max doesn’t go potato. It does go, though. It goes very, very well indeed.

The 150hp isn’t quite chart-topping like the 160hp from the KTM 1290. The 127Nm doesn’t entirely shift planets like the 143Nm from the 1250GS. What it is is a beautiful inbetweener, with power enough to fill your boots and sufficient torque to pull itself out of the quagmire.

If not, just enjoy the feel of that motor. It revs in short, satisfying barks, shooting up to the 9,500rpm redline in an instant. It’s pretty intoxicating and a big chunk of lightyears away from the chug-along cruiser motors we expect. It feels modern, smooth and invigorating.

In the dirt, the weight is again happily hidden. The motor is able to be both smooth and comforting at small throttle openings, and a raging, shouting, spinning lunatic when going full beans. The suspension carries on its good job over the dirty bumps, the seat is still cushy and everything is smooth and stable. It’s almost annoying how Harley-Davidson has got everything right.

We have not had it up against any of the two main Europeans, but we are keen to see what would happen. We laughed when Harley-Davidson first announced the Pan American. Now we really think it can take on the might of Europe on the battlefield of adventure.

The world really is upside-down.