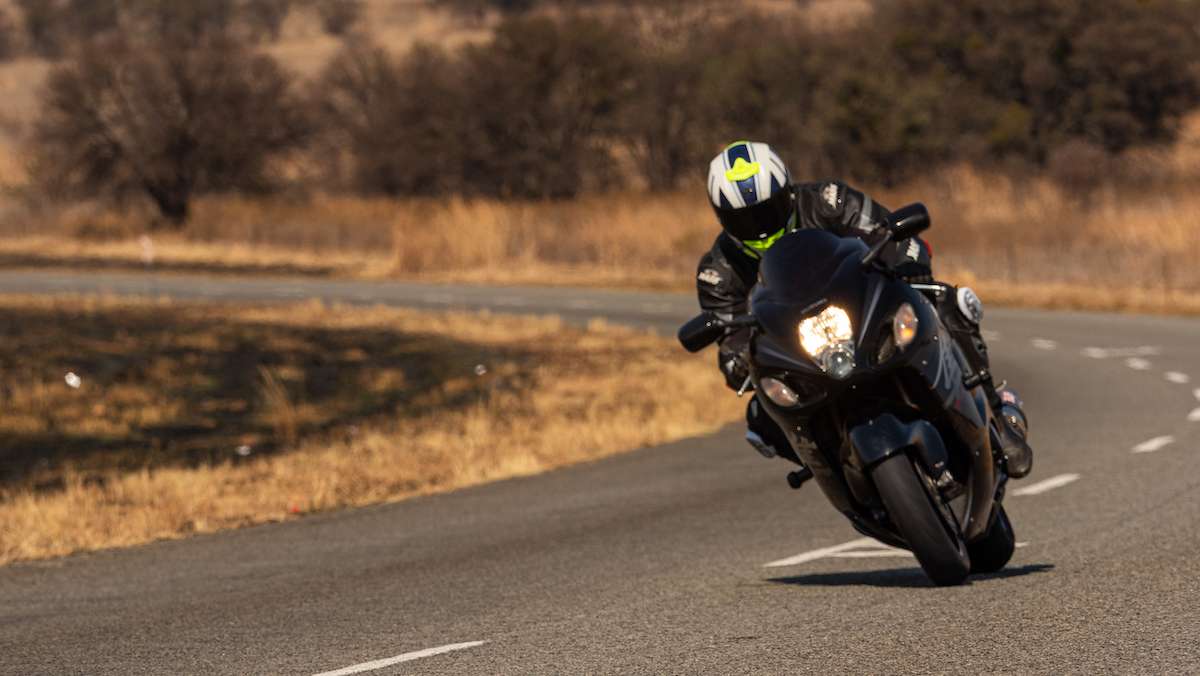 With the imminent arrival of the Third Generation of Hayabusa, perhaps it would be fitting to look at the iconic model that started it – the genesis of the King of Speed itself, the Generation One Hayabusa.

Let’s put this into perspective – the Nineties were glorious days. They were the days when everything was about speed, top speed especially. And the Japanese were at the forefront. Kawasaki got the ball rolling with the ZZR1100, while Honda packed the punches with the CBR1100XX Super Blackbird. Then, in 1999, as the world was foolishly preparing for every computer to fall to the catastrophe that is Y2K, Suzuki released this, something called a Hayabusa.

It was like nothing anyone had ever seen before. It was so unmistakably different that when the world first saw it, it went: “ewwwwwww!”

It certainly wasn’t a looker, but then it was never supposed to be. It was purposefully built to be “grotesque”, firstly because if it were beautiful, it would have looked like everything else. The Hayabusa needed to be unmistakably unique, the face of Suzuki Motorcycles. And they certainly succeeded.

Also, the pointy front and flowing lines created excellent aerodynamics, slipping through the air like, well, a Japanese falcon. That makes sense – the Hayabusa falcon is the fastest animal in the world, making it a great namesake for Suzuki. Also, just by the way, the Hayabusa hunts Blackbirds. Isn’t that convenient?

Beyond the look and the name, the Hayabusa sported a 1298cc, in-line, four-cylinder motor, the largest in any sports bike. With that, it menaced the world with 175hp and 138Nm of torque, 11hp and 14Nm more than the reigning king, the Honda Blackbird. The giant analogue speedo went up to 320km/h. The top speed was 23km/h faster than anything else, and it was measured going from 0-100km/h in 2.4 sec, plus managed the quarter-mile in 9.8 sec. Can you imagine?

Especially in 1999. I was an overly impressionable 17-year-old, and my dad bought one. I spent the entire day in the garage sitting around it and admiring it. That night, I couldn’t sleep with the excitement of knowing it was in the garage not far from my bedroom. It was like a mechanical god had descended from Mount Olympus and was gracing us mere mortals with its presence. And the people who rode it were like archbishops in the cathedral of motorcycling.

It was built from 1999 to 2007 with only minor changes until the Gen Two was released in 2008, and the showroom floors of Fire It Up just happened to hold a somewhat pristine 2005 model. Let’s see how it holds up in today’s world.

In terms of its condition, it holds up bloody well. Whoever owned this machine took good care of it – the paintwork was blemish-free, there was no rust, no signs of abuse and the motor ticked over like it was new. The previous owner’s good treatment deserves accolades for much of this, although Suzuki is renowned for building motorcycles with a dollop of indestructibility.

Mostly, it was standard, except for the addition of two massive Yoshimura exhaust cans, a compulsory addition to all Suzukis at the time.

Of course, it lacked all electronic aids, apart from the essential indicators, lights and hooter. The dash was two massive dials; one showed the revs while the other the speed. A small electronic screen showed trip information. An analogue fuel gauge showed when you would need to start pushing. An analogue temperature gauge showed the unlikely event of a Suzuki overheating.

It was a cold morning, and idling was a little troubled, so we pulled a special lever that they had in the old days called a “choke”. Once it warmed up a little, the choke could be switched off, and regular service resumed.

The Hayabusa is not a small motorcycle, weighing in at 217kg dry. Interestingly, despite all of Suzuki’s attempts to curb the weight of the modern Gen Three model, the new bike is three kilograms heavier than the original. Much of that is down to the Euro5 bureaucracy that has been thrown at it. Some engineers have said that the Euro5 requirements can add as much as 40kg to a motorcycle.

With stability at speed in mind, the Hayabusa is long and low. The advantage of this is that it is indeed stable at any speed, and the machine’s weight is easily manoeuvrable as both feet can make firm contact with the ground. The downside is that people with longer legs might find it a touch cramped.

Beyond speed, the Busa was designed as an all-round package. The motor is smooth and effortless at all speeds, easily accelerating from any revs. Apart from diminished legroom, the seat is cosy, the bars are within easy reach, and there is surprisingly good wind protection from something that looks like a low-slung missile.

It does affect the handling somewhat. Track bikes built to smash lap records are designed taller and shorter, making them more nimble for quick direction changes. The downside is that they tend to be unstable. Anyone with a superbike that’s part of the 200hp club will tell you how essential a wheelie control is. Actually, they will probably be too macho to admit such things. Still, when they are accelerating hard out of a second-gear corner, deep down inside, they are eternally grateful for the flashing light on the dash that explains why the bike didn’t just flip upside-down.

The longer, lower dimensions of the Busa mean that there is a charitable slice of boatiness when trying to turn into a bend, however, that initial effort on the rider’s arms is rewarded by a bike stable enough to corner its way through a brick wall.

Then there’s the motor, the Hayabusa’s big party trick. Yes, it’s easy to ride at any speed, but what about flat out? Does the Gen One still cut the mustard? There’s no ride-by-wire throttle on the early models, so there are no rider modes, TC or anything. It’s all up to the wrist. Besides, can you picture attempting to explain the slower C-mode to the speed-crazed people of 1999? What would they say?

With everything dependent on the wrist, we decided to try out ours. When I was 17 and riding my dad’s Hayabusa to school (my father had very liberal ideas about his underage son riding high-speed motorcycles to school – my headmaster was less understanding), I’d find a stretch of road that was wide, open and empty. There couldn’t be any side roads or driveways because people turning out of those don’t generally look for bikes approaching at Mach7. There needs to be no cars anywhere within five light-years because, at said Mach7, they will arrive far quicker than any rider can react.

Those same rules applied here – there’s a stretch of the Satellite Road near Joburg that goes on for kilometres that is entirely open with no side roads, and the rider can see any potential U-turn offenders throughout the stretch. It was also not busy on the Wednesday morning when we were filming.

Right, check that the coast is clear, put the bike into first gear, take a deep breath and open the throttle…

In all honesty, I was not expecting to be blown away. Modern superbikes push a full 40hp more than this machine while weighing considerably less. The lack of RBW throttle means that the initial pick-up when opening the throttle is less explosive than on the modern bikes – would it affect its flat-out performance?

I was expecting it to be just okay. I’d be impressed with its commendable efforts considering its technology is now 22-years-old making it a pensioner in the world of modern motorcycle marvels. I wasn’t expecting the wind to be half knocked out of me.

The trick is stability – it can be opened in first gear and held there until it hits the rev-limiter. The front-wheel might get a little light but at no point is it attempting to flip spectacularly. The same is true for second gear. It makes 175hp and can use all of it. A litre sports bike might shoot out 220hp, but its nimble frame can use maybe 140 of that in first gear and possibly 160 in second. Either the rider would need to short shift or rely heavily on the wheelie control.

The Hayabusa has no such limitations – the 100 km/h mark shoots past in the blink of an eye, and 200 km/h is reached two blinks later. And then it steams on relentlessly up to 300 km/h. Sadly, on this 2005 model, that’s where the journey ends. From 2000, Japanese manufacturers had a handshake agreement to limit motorcycles to 300km/h. The reason was primarily down to EU bureaucrats eyeing them suspiciously, suspecting them of creating vehicles that could be fun, something the EU stands vehemently against – 300km/h is all the fun they would accept.

These rules did not apply to the original 1999 model, and it was recorded doing a true top speed of 312 km/h, a figure that still stands as a record for production motorcycles today.

Here’s the thing about motorcycles, as it is about most things in life – it’s all about relativity. The best way to ruin a bike is to ride a better one. Until someone rides a better bike, the original will be brilliant in every way. I’m pretty confident that the Gen Two Hayabusa feels better than the Gen One and that the new Gen Three feels even better than that. But on this day at the Satellite Road, there was only the Gen One. And it felt magnificent.

If you had told me that I’d have to ride it for the rest of my life, blissfully ignorant of anything else on the market, I’d be jolly happy. The Gen Three is going to have to be mind-blowingly good. It’s got one helluva reputation to live up to.

How to have fun and annoy the neighbours: The Rokon Trail-Breaker