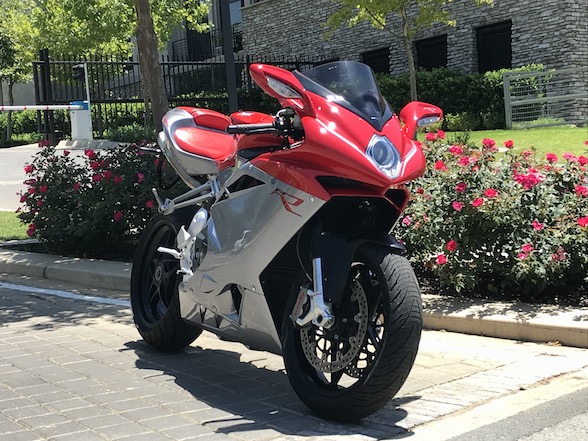 Much like we have already seen on The Bike Show TV show, the website version will be doing a weekly road test of one of the models on the floor of Fire It Up, the famous motorcycle dealer in Fourways. With more than 100 models arriving and leaving their floor every month, there are a lot of interesting bikes to look at and with the announcement that Fire It Up is the new MV Agusta importer, we thought it would be prudent to ride an MV, and we found a good one. 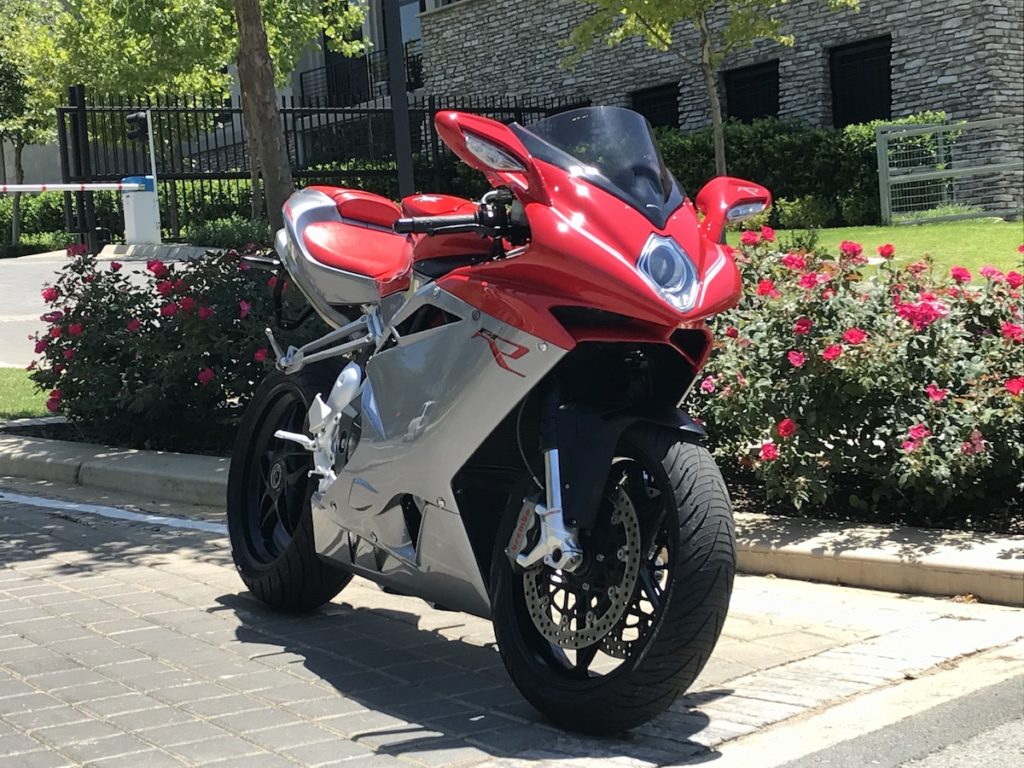 In 2012, MV Agusta had four 1000cc superbikes – the F4, the F4R and the F4RR. The RR model was obviously the pick of the litter – adorned the latest in Ohlins suspension, a motor topping 201 hp and a the likes of an adjustable swingarm pivot and steering head, it was everything the then modern track enthusiast needed to get the best out of their track riding. If you had no idea what an adjustable swingarm pivot does, then the exorbitant price you paid for this machine was probably a bit superfluous.

The F4 had none of that, and was a bit plain Jane, but the F4R was the baby bear porridge of the three – just right. It was only a few thousand Rand more expensive than the none-R and 30% cheaper than the RR version. It didn’t have any Ohlins, but it did have the top of the range Marzocchi forks and Sachs rear shock. There were no adjustable swingarms and steering heads but, in fairness, no one quite knew what those things did anyway. The motor pushed 195hp, six down on the RR, but certainly no slouch, and apart from that there was little else to tell the two apart. 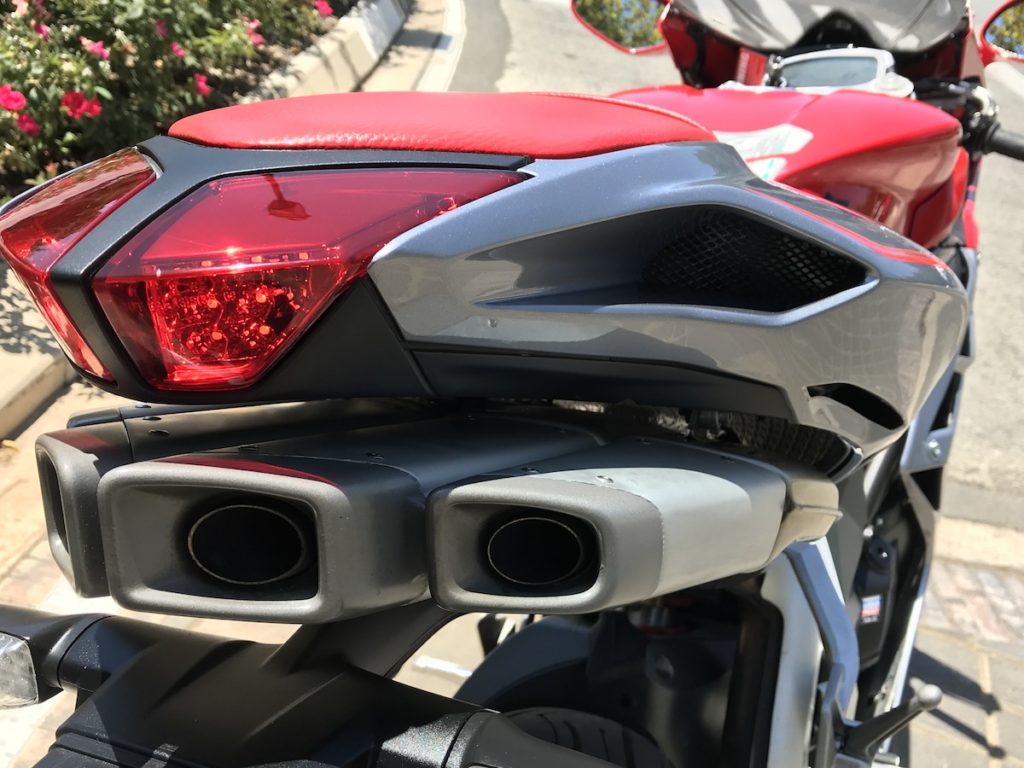 Now, seven years have passed and again we are confronted with the F4R, sitting demurely on the Fire It Up showroom among a row of shiny, pre-owned MV Agustas. We try to remain completely unbiased and dispassionate regarding judging motorcycles, but our unbiased, dispassionate opinion is that the MV Agusta row is one of the most beautiful things we have ever seen in our lives, ever. This particular model, embellished with a dashing red and silver paint scheme, would look just as good hanging above the mantlepiece of a Houghton home as it would blasting down the Satellite Road. It is one of those motorcycles that you can spend an entire day perched next to, spotting gorgeous details, and still find more the longer you look. Those sharp, piercing lines, the famous four exhausts in the rear, the single-sided swingarm, everything!

The four-cylinder motor lets off an expectedly similar tone to the the screaming four Japanese bikes and the BMW S1000RR, because it has exactly the same format as them, and yet, in a subtle way, it has something extra. At full tilt, it is unmistakably a screaming four, but there are moments, when you shut off and when you first open the throttle, where there is a little growl that tells that this is Italian and, worry not, the flair is there. 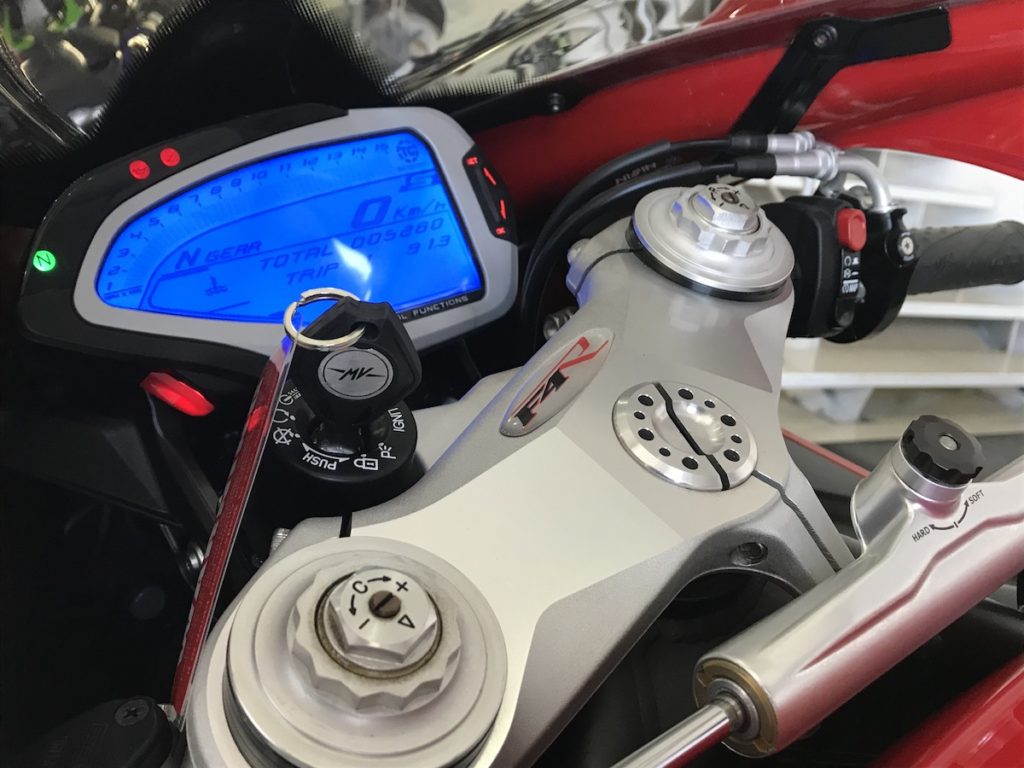 This exact bike has a little more than 5,000km on it, so it is slightly more than run-in. If you look very closely, you can find little nicks and little signs that this is a pre-owned motorcycle, but it takes some searching. Otherwise it appears to be brand bloody new. And it can be purchased for the reasonable sum of R139,888. Thats a bucket-load of art, glamour and glory for R139,888.

See below for the full 2012 MV Agusta F4R gallery.