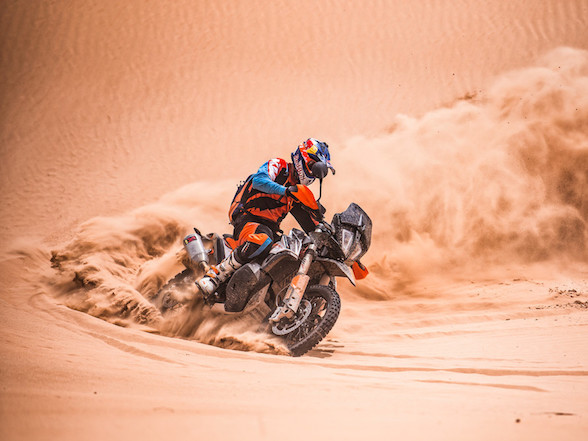 Everything you need to know about the KTM 790 Adventure R 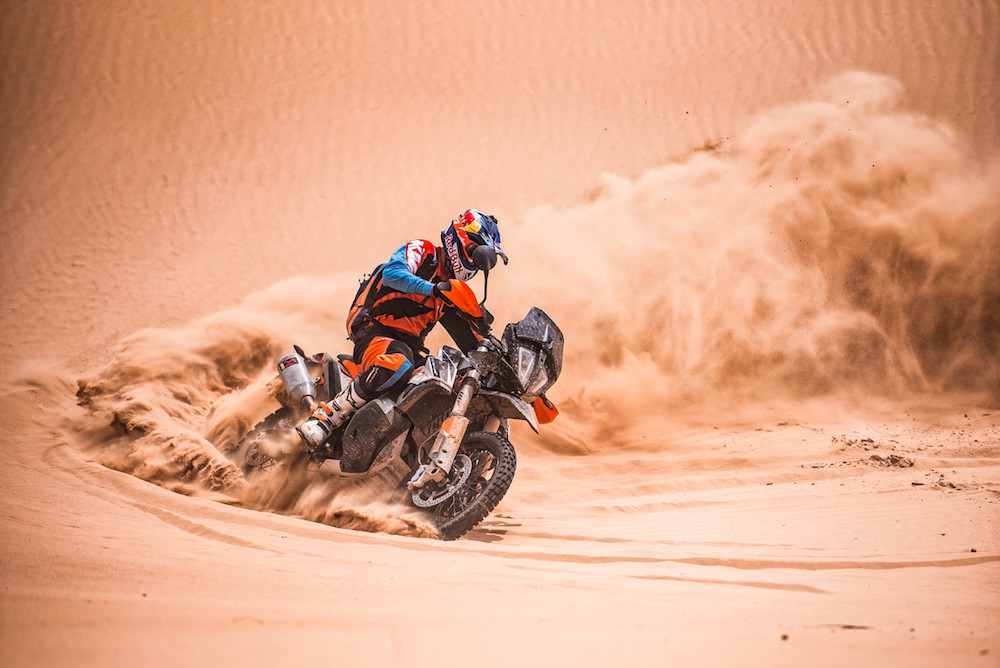 The covers are finally off the production version of the KTM 790 Adventure R and it appears to be everything that was expected of the Ready To Race brand. Here are some fast facts: 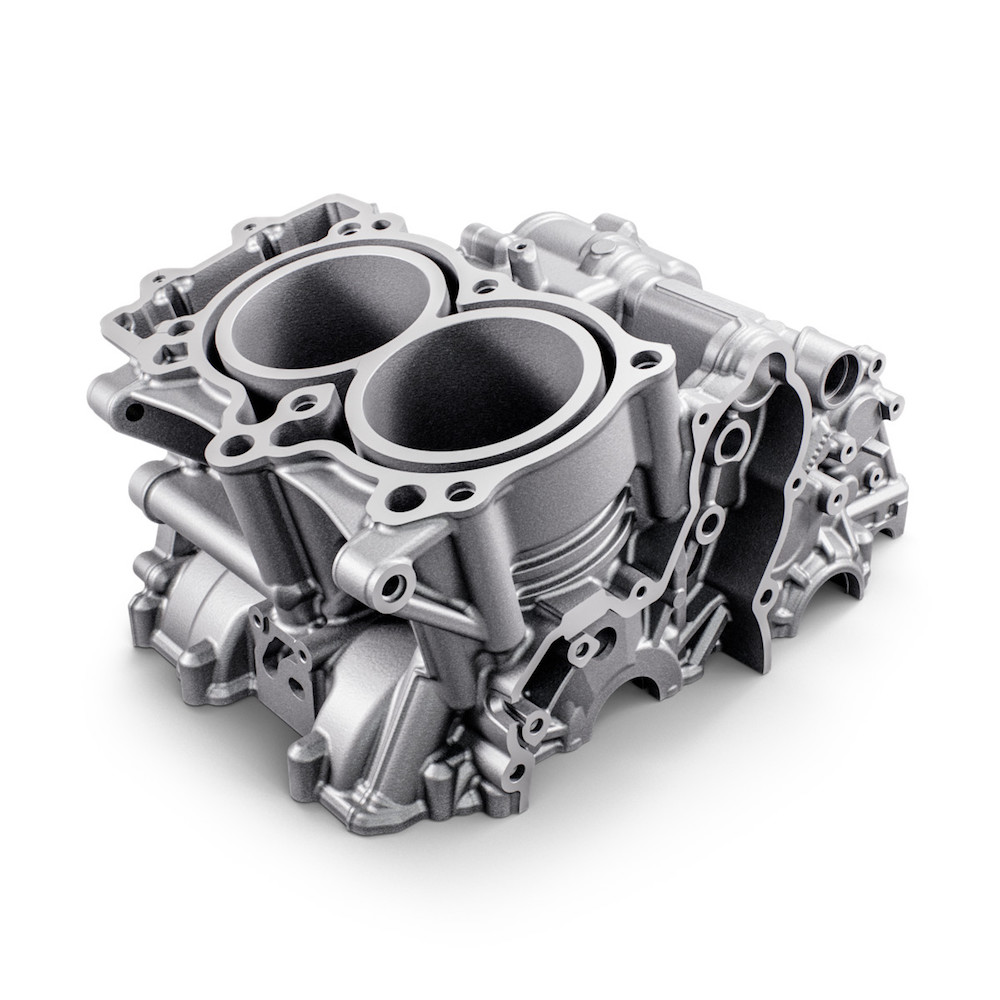 The motor is the same but isn’t
It uses much the same 799cc parallel-twin motor as the 790 Duke with the same irregular firing order, except with a bit of a retune for easier power and better longevitiy. Where the 790 Duke pushed 103hp, the Adventure churns out 93hp and 83Nm of torque. 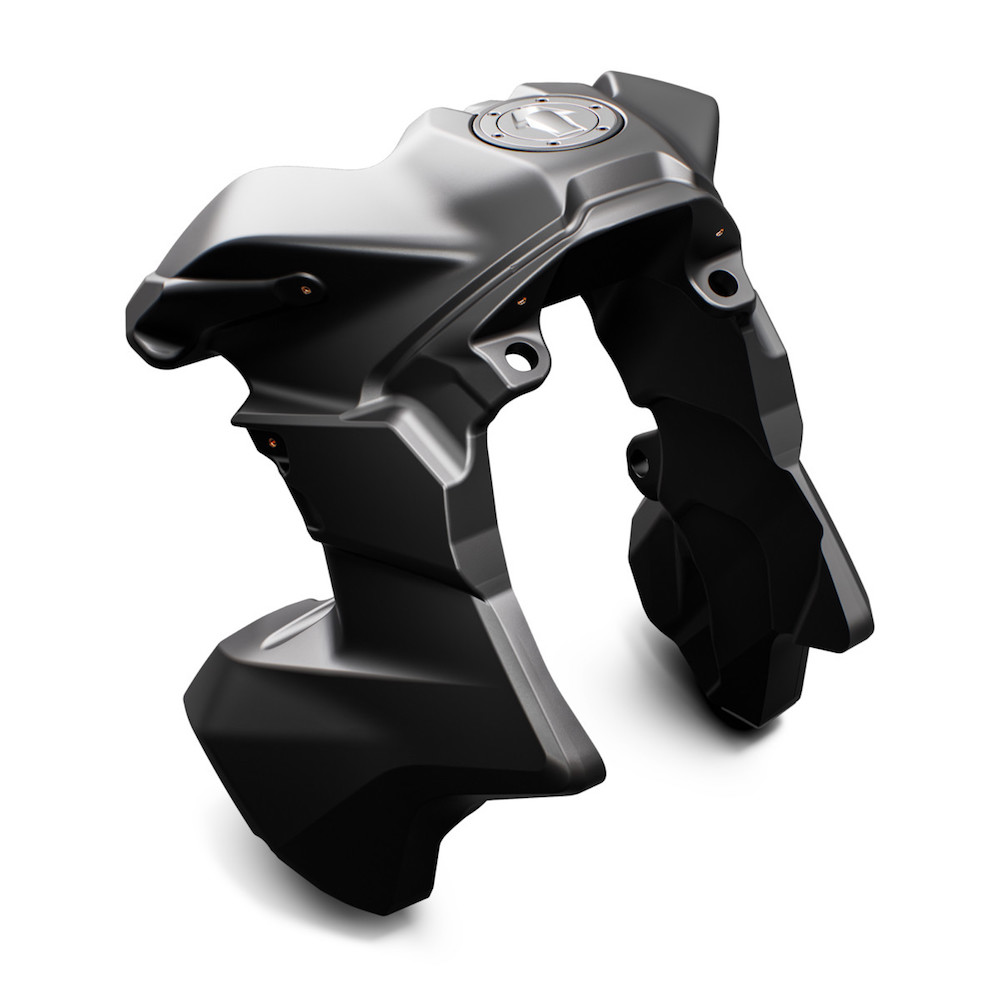 The fuel tank is clever but not big
The fuel capacity is 20L that, in the distance eating world of adventure riding, is not a lot. It is the same as a base model R 1200 GS, though. However with the fuel economy of the smaller motor, KTM are claiming a range of 450km. To keep the weight under check, the fuel tank is shaped in a similar fashion to their Dakar racers, keeping the fuel low down and therefore offering a lower centre of gravity. 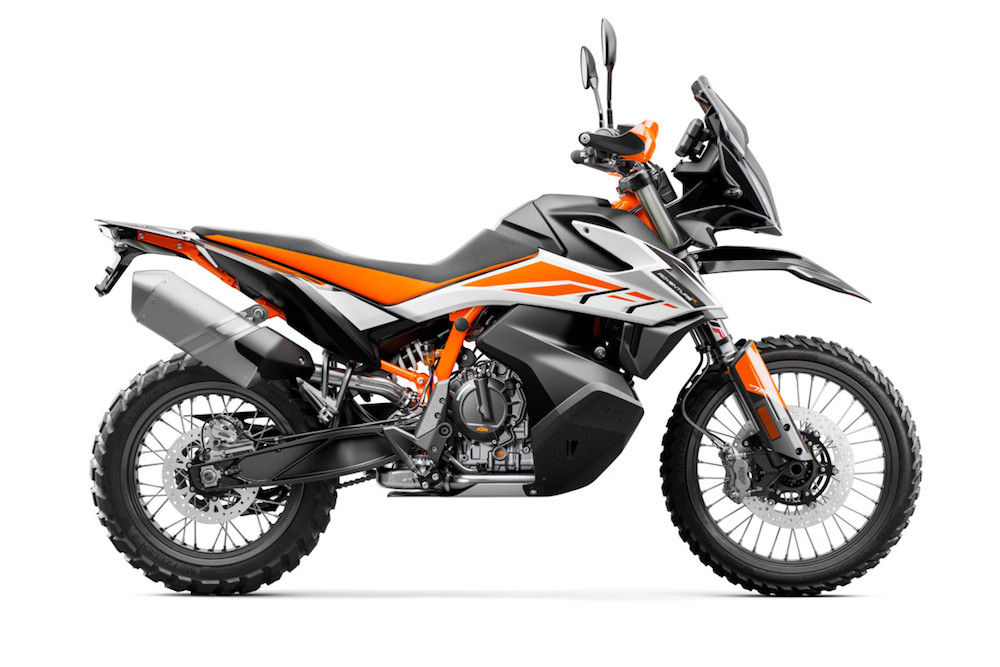 The wheels are going to make your inner adventurer happy
Both 790 Adventure models will be released with spoked wheels with the rear sized at 18 inch and the front at 21 inch. Even the most hardcore adventure nut cannot argue with that. More so, the bike is fitted with Metzeler Karoo 3 adventure knobbly tyres. 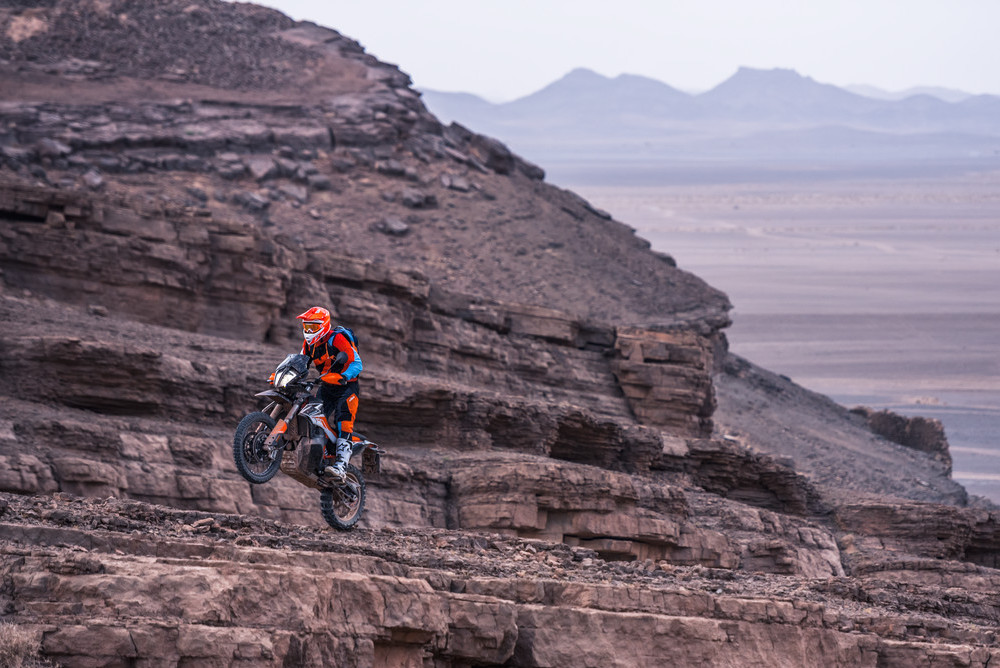 The suspension is from an enduro bike
The front forks are 48mm XPLOR units, the exact models used on their enduro range. The one fork handles compression damping while the other looks after rebound. The rear shock is also an XPLOR model, like the enduros, with KTM’s famous Progressive Damping System that does the job a linkage would do without weighing as much as a linkage system. Both front and rear has a travel of 240mm that’s a good deal down on the enduro models but is a veritable crap-load for an adventure bike. 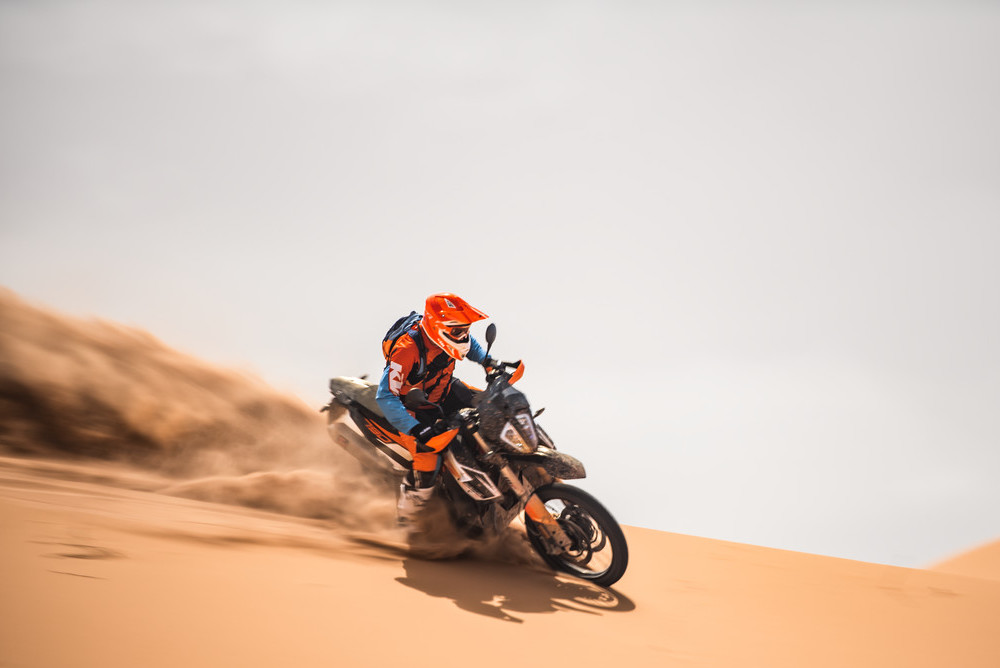 It’s light, as promised
KTM have giving a claimed dry weight of 189 kg. How that translates into kerb weight depends on oil, water, battery and other liquid levels, but we can put it into perspective –the BMW R 1200 GS has a dry weight of 205 kg, and once all the liquids are thrown in this goes up to 235 kg. The 790 will most likely use less liquids, so we can happily assume that it will come in with a kerb weight of less than 220 kg. 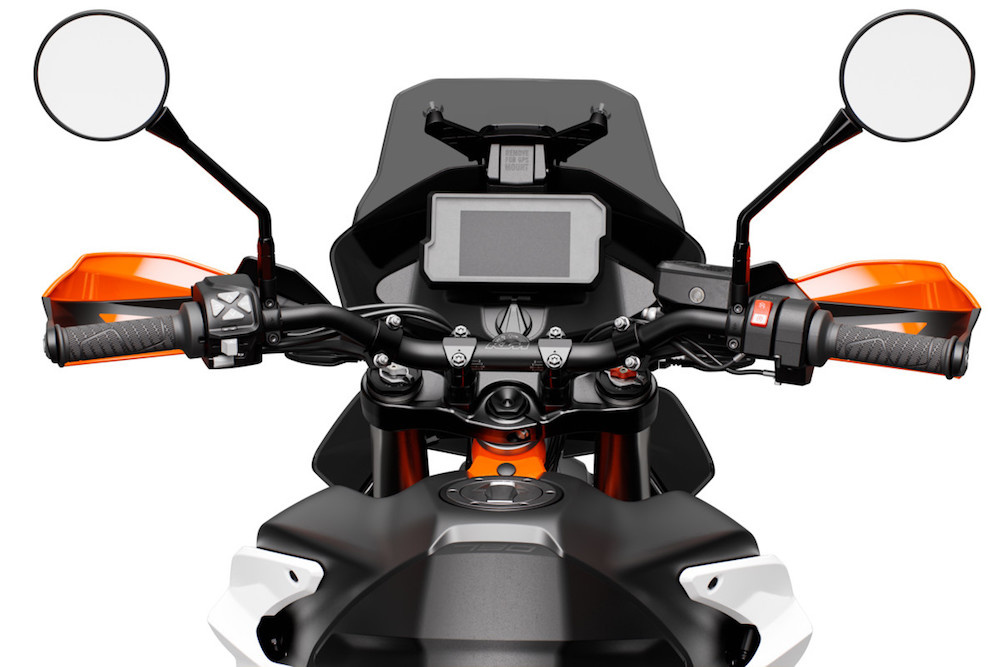 All the electronics are all there
Obviously this motorcycle is released with a ride-by-wire throttle controlled via input from an IMU, meaning it has top of the range traction control, cornering ABS and rider modes. Included in the ABS is an off-road mode that switches off the rear ABS for some sideways action. The rider modes are all there, including an Off-road Mode obviously, but what is interesting is a Rally Mode that lets the rider customise the settings accordingly. As options there is a both-ways quickshifter and cruise control. This is all controlled via KTM’s famous TFT dash, including the My Ride system that connects to the rider’s cellphone. 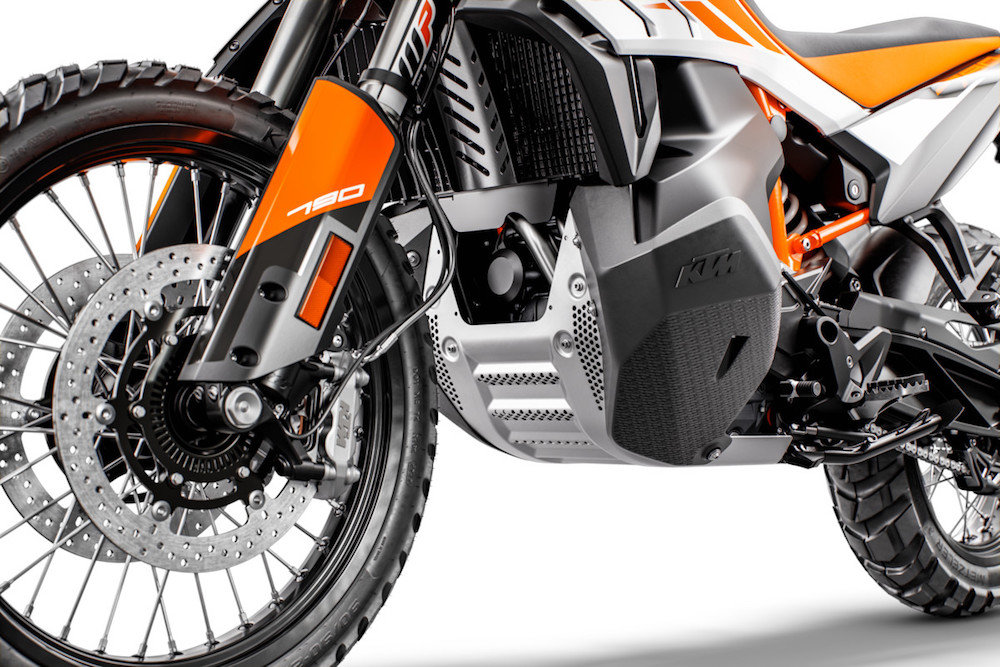 It shouldn’t case easily
With the extra raised suspension and enduro wheels, the plated sump sits 260mm from the ground. Both the Honda Africa Twin and the 1290 Super Adventure R find themselves 250mm above earth. That used to be good. 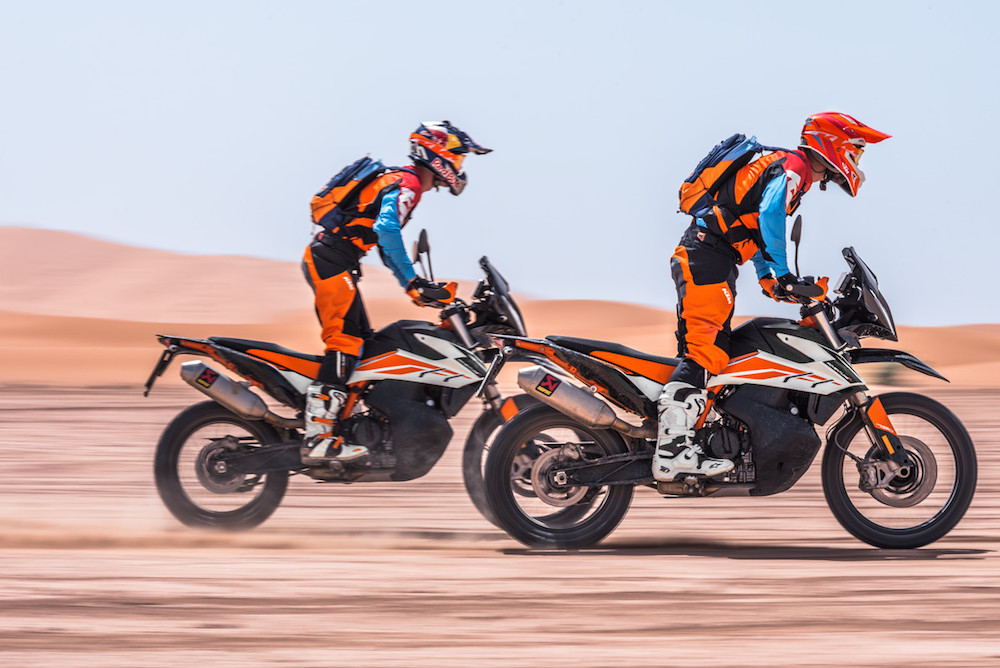 The ergonomics all say off-road
The seat height is 880 mm which is a good deal of tallness, the seat is a motocross-inspired single unit giving the rider a lot of movement, the screen is sharply angled but low so that it will not obstruct the rider’s view when dirty and the footpegs are clawed as per their off-road function. The raised handlebars feature hand guards. 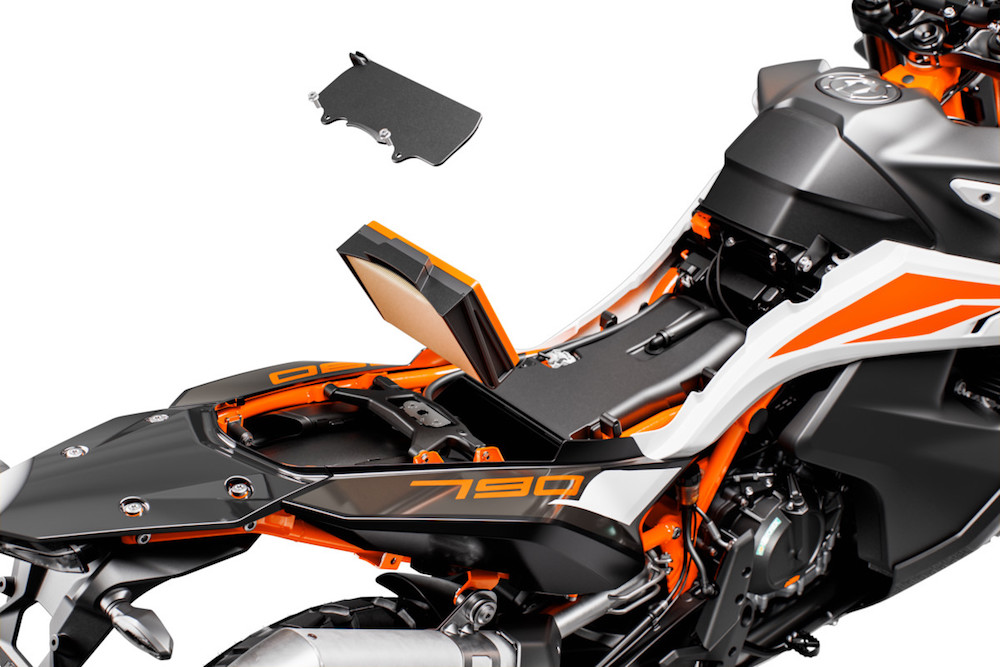 The airfilter is easily removable
Unlike most modern bikes, that require 17 tools, a masters degree in engineering and a hacksaw to remove the airfilter, the 790 Adventure’s is in an easily reachable compartment under the seat.