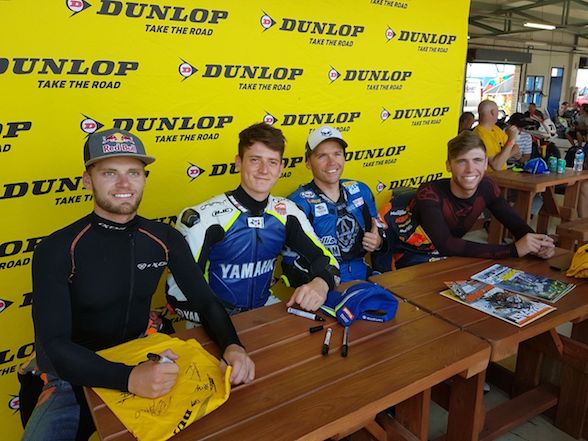 Dunlop South Africa hosted an exclusive track day at Phakisa Freeway where Dunlop dealers and their guests had the opportunity to share a track with the 2016 Moto3 champion and current KTM Moto2 racer, Brad Binder.

While it was called The Dunlop Brad Binder Track Day, there were far more stars on the cards than just Brad Binder. In the pits, among mere mortals, were brother Darryn Binder, fellow Moto2 racer Steven Odendaal and SA’s racing super star Sheridan Morais.

More so, this was not simply one of those publicity days where the guests of honour just stand around, smile for selfies and be polite. For them, this was an actual practice day as they prepare for their seasons, while other guests were allowed to partake.

Brad Binder, with the help of Dunlop South Africa, had manage to acquire some sets of actual Moto2 race tyres to practice on. This is a bigger deal than it might appear, because not only are Dunlop cagey with the idea of sending their latest technology out into the wild, but Dorna, the company behind MotoGP, has banned all off-season testing, and they police this through the supply of tyres. So, in order to get his hands on these precious bands of processed tree sap, he had to prove to Dunlop that he wasn’t secretly selling technology to the French, and he had to prove to Dorna that his GSXR600 practice bike is not a disguised KTM Moto2 machine.

Steven Odendaal was elblow sliding his Yamaha R6 practice bike and Sheridan Morais drifted an R1 everywhere. The only person that was a little left out was Darryn, who was a little short of Moto3 practice bikes, and is further out of luck because there are no real road-going equivalents. Instead, Suzuki loaned him a GSXR1000R demo bike and he sped around the track faster than the GSXR engineers probably intended it to go in standard trim. What was good is seeing Darryn in a Red Bull KTM pair of leathers and he finally gets a chance with a good team.

During lunch, the four stars did an autograph session and were their usual friendly, gentlemanly selves. In fact, throughout the day they were always approachable and happy and friendly, showing once again how South Africa churns out not just riding talent, but true gentleman.

The track day itself was run by the good ladies and gents from Moto Rider Academy. and put of their usual good shows.