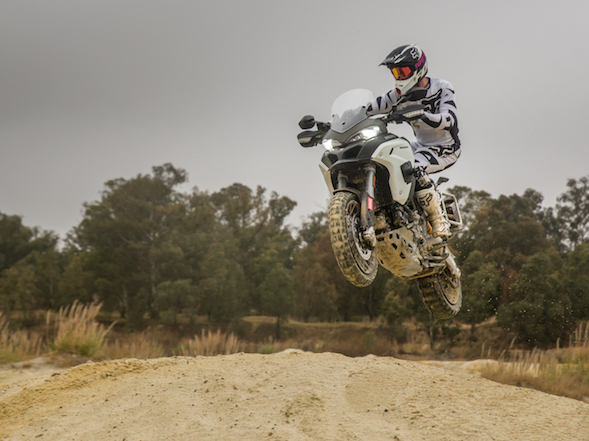 Going enduro on an Enduro:

at Chimes mine dumps

At The Bike Show, we have this knack of taking the names of bikes literally, which makes for interesting stories and photos such as are not seen anywhere and is why Bike SA stays so far on top and importers fall over themselves to let us have the bikes for testing. In some of the past tests the Scrambler went scrambling for real, a Triumph Tiger met another tiger that climbed all over it, a Monster induced fear and a Panigale was treated like a suburb of Bologna. We probably don’t need to explain what we did with a bike called an Enduro.

Ducati is breaking new ground with the Enduro, literally. The standard Multistrada models are very loosely termed “adventure” bikes, and even optimistically offer an Enduro mode in the settings, but 17” mag wheels, not much ground clearance and suspension travel far shorter than most other adventure bikes don’t exactly speak volumes for their offroading prowess. They are exciting companions for long journeys, offering superbike performance with touring comfort, but if you were to wade into the deeper, darker midsts of untamed Africa, you might be forgiven for not choosing a Multistrada. Until now.

This is the first Ducati where the term “offroad” is spoken with some sincerity, and they’ve done far more than simply jack up the old Multi. Actually, there are 266 new or updated components on the Enduro, and these are more than just the odd bolt. The suspension has obviously been lifted, now offering 30mm more travel than the standard bike and, at 200m, more travel than most other adventure bikes. With that, the software for the Skyhook Suspension, that adjusts the damping settings for each bump, has been recalibrated.  The front wheel is now 19”, up from the more road-orientated 17” on the standard bike, and both wheels are now spoked with the capability of hosting tubeless tyres. With all this up-ness added, the ground clearance is now 205mm, 35mm more than the Multistrada 1200.

Then we get to business end – the cockpit. The one-piece handlebar with a new bend is lifted with new risers making them 50mm taller, meaning that meerkatting (Def: standing while riding your adventure bike, with particular emphasis on those who stand while riding down a perfectly smooth tarred road that does not require to be navigated while standing) becomes more comfortable. Even the mirrors have a modified bend to allow space for the standing rider. The seat is now non-adjustable, and lifts the ride height to 870mm, versus the 825mm – 846mm on the standard Multistrada, which is downside to the vertically challenged among us. The footpegs are cast steel, like those on motocross bikes, with removal rubber inserts.

The weight of the Enduro checks in at 254kg with the 30L fuel tank full. The DVT engine is the same as that on the standard bike, and pushes 160hp with 136Nm of torque, making it the most powerful offroad-orientated motorcycle on the planet. The only major difference is the transmission, that gets a shorter first gear to help deal with the more technical bits, and a shorter final ratio to help deal with everything. To keep all this in check as the going gets rough, Ducati have made the Enduro more stable. To do this they have offset the front axle by an additional 16mm, increased trail by 4mm and increased rake angle by 1 degree to 25 degrees, making the handling a little slower, but far more forgiving. Also, the double-sided swingarm has been made longer, stronger and stiffer, in the end increasing the total wheelbase by 65mm to 1594mm.

To keep everything safe, the exhaust silencer has been lifted, increasing the wade depth by 77mm, the skid plate has been extended and reinforced, and they have fitted aluminium side panels to protect the fuel tank. The electronics are hugely sophisticated, as is the way with modern Ducatis, with a multi-level traction control and ABS (level one turning the rear ABS off), a wheelie control and Vehicle Hold Control, stopping the bike from rolling backwards on hills. There are four rider modes – Touring, Enduro, Sport and Urban, with the Urban lowering the maximum horsepower to 100.

Going for a Ride

In photos, and even at its unveiling at the SA Bike Festival, the Enduro looks huge, like a beast ready to devour all that is thrown at it, but climbing aboard reveals that it feels more like a little puppy dog. This is a clever bit of mischief from the marketers – every man wants to give off the impression of being big and fearsome, ready to conquer Hades, mighty enough to devour Beelzebub and flashy enough to overshadow Tom Cruise. Truthfully, though, most men would prefer not to handle something so cumbersome, which is why to bike gives the visual impression of being bulky and voluminous, yet is nippy and compliant under the rider’s fingers. The seat height of 870mm is tall, but is a good deal more forgiving than the 890mm on the KTM 1190R. It has a lower seat than many other offroaders, the footpegs are closer, which is fine for us garden gnomes, but might be a little cramped for taller riders. The handlebars are higher and perhaps feel wider than other models, adding further confidence to the package. The screen is easily adjustable using one hand.

The motor is ever so smooth, especially for a Ducati, and the 160hp is incredibly exciting, especially offroad, but should you prefer a more relaxed riding experienced, then simply change up a gear and let it purr along at effortlessly at low rpm. At above 6,000rpm it is an absolute tiger, but a little kitten below. If this isn’t enough, switch the rider mode on the fly to Touring and the throttle response will be eased off.

The taller suspension certainly feels spongier than the normal Multi, as is expected, but it’s a far cry from riding a sponge cake. As is the way with all adventure bikes, only the very capable road riders will require the hard setting, making the Enduro more than enough for most riders. In fact, especially for South Africa, there are very few people that would fair better on the normal Multi. The Enduro is all the bike most people will ever need.

Taking it too far – Chimes

As we said, they have called this model the Enduro, which is the name given to only the most hardcore offroad races, so it’s only rational that we see whether it lives up to its namesake. Chimes is a popular area in Benoni set near a 130 year-old tavern. It is littered with dirt routes, varied terrain and huge mine dumps. Every weekend it is thoroughly populated with offroad riders, quad riders and even the more hardcore 4×4 enthusiasts. It’s not really the sort of place adventure riders frequent. Even the most adventurous of adventure riders tend to find it a bit over the top, especially when they do go over the top of one of its massive dunes only to find 100m of nothingness beyond it. Yet, for a bike that has Enduro written on it, it should be easy.

Obviously, none of our staff are stupi…err…brave enough to give it a go, so we enlisted the services of a man who has no fear, has unlimited talent and is helpful enough to leave his busy employment at Racestar Graffix to join us on the coldest and wettest day the Highveld has ever seen. With a certainty, everyone can recall the cold front during mid-June, that brought with it an onslaught of thick rain clouds to accompany its icy winds. It was on this day, under an ominous sky, that one journalist, a photographer and cameraman stood in layers of material watching Grant Frerichs defy all preconceptions of big adventure bikes.

You would think we would be used to this by now – we have seen Grant on many an unsuited machine do things said machine certainly shouldn’t, yet it is always a sight to behold. He kitted up, climbed aboard and set straight off, the 1198cc motor filling the dune amphitheatre with its sonorous roar. The 256kg wet weight is more than double that of an enduro racer, and 160hp is more than double again that of the most powerful plastic machine, and yet he glided straight up the first dune, turned it around half way up and powered it down, sand spraying high up the dune at the mercy of the knobbly tyres.

The flat sections below the mine dumps are far from flat, looking more like whoop sections than a salt pan, over which the front wheel barely ever made contact with planet earth.In the soft sand sections, he tossed the bike in, letting the sand act as a berm, and powered on letting the 160hp spin the back wheel sideways completing the curve. Mine dumps come in various shapes and sizes, and two happened to form a convenient double jump that saw all 254kg flying high above it, clearing it effortlessly.

Then Grant turned his attention to the large mine dump climb that is a popular challenge to the weekend visitor. The approach is whooped, as is the beginning of the climb before getting steeper, sandier and more treacherous. The final cherry on the cake is that it isn’t straight, turning sharply to the left at the very top, just where the bike is losing traction and momentum. The 100kg plastic racers find this climb ominous, 256kg shouldn’t even attempt it. Yet Grant approached at speed, skipping over the whoops and letting the suspension compress as he hit the bottom of the jump, the bars weaving subtly, as they do under such circumstances. Yes, 256kg is a lot to tackle a dune, but 160hp is also a lot, and Grant cruised up with the dune helpless to stop him. Even the turn at the top posed no threat.

So far, we have piled nothing but praise on the Enduro, but 256kg is still no lightweight, and this became hugely evident when Grant came back down the dune. When the weight of the bike is on the back wheel while accelerating, things go well, mostly because the back wheel is fat and all accommodating. The front wheel is another story… Slowly, one step at a time, he made his way down the dune, looking like a moose with a severe phobia of heights. Afterwards, he politely asked if he could rather not do that again. We lump praise upon the Enduro, but it is still a heavy adventure bike, and much of what was achieved on that frosty day was because of Grant’s courage and talent. Most mere mortals wouldn’t even attempt most of these stunts, let alone complete them.

Yet the Enduro did it. It has the capabilities, and much of this has to do with its small feeling, despite its large looks. It gives the rider confidence, and that means the rider is already halfway there.  Ducati set off to build an offroad-capable adventure machine, a go anywhere companion, and this they have done. It’s certainly another feather in their cap. See you in Africa.