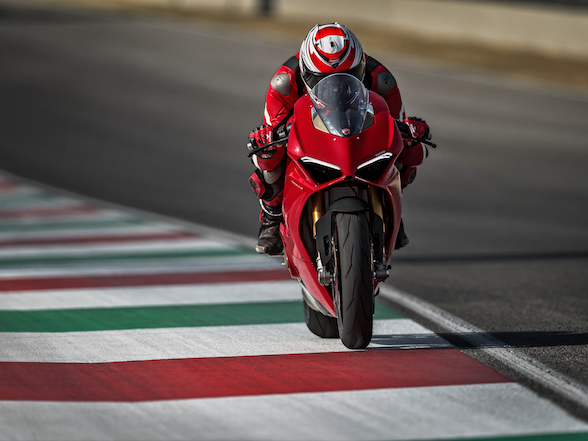 After a stream of spy pics and spy videos that are conveniently obscured, Ducati has finally unveiled the Panigale V4, their new flagship superbike and the bike that marks the end of Ducati’s 30-odd years of twin cylinder pioneering. 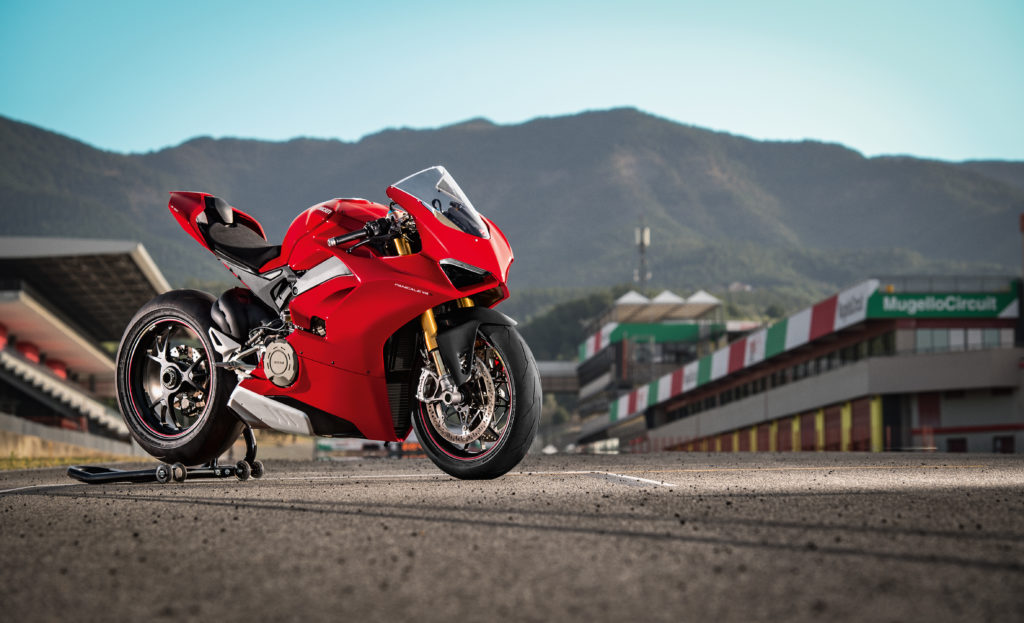 The design clearly shows that it is still a member of the Panigale family, although it appears to have inherited Uncle Luigi’s chubby cheeks. Still, look at the numbers – 1103cc, 214hp and 175kg dry.

The new motor is, as the name suggests, obviously a V4 with Ducati’s traditional 90º V. It’s also 1103cc meaning Ducati have also kept up the tradition of ignoring racing rules when building their road machines by giving them more cubic centimeters than the rule makes would prefer.

With the extra chunk of volume, the power output is now a massive 214hp, nine more than the previous 1299 Panigale yet, conveniently, one less than the Superleggera meaning no angry millionaires. Where it is losing out to its V-twin predecessor in the department of torque – where the 1299 pushed a class crushing 144Nm, the new V4 is a somewhat more low key 124Nm. 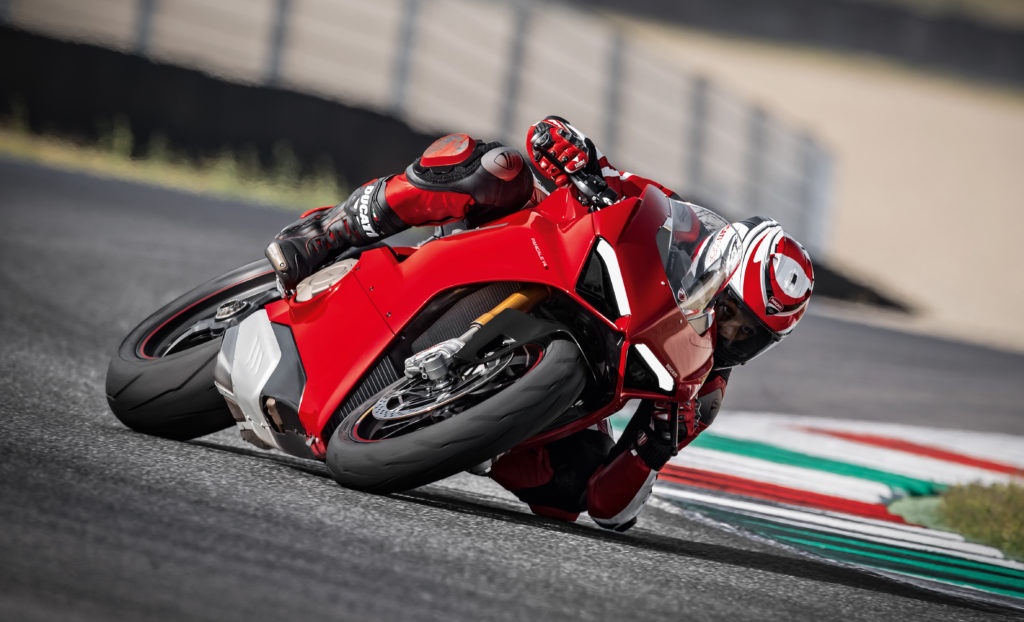 Where it also loses out is in the department of weight – the new V4 has a dry weight of 175kg, whereas the 1299 weighed in at 166kg. This might seem like an unacceptable addition of chunk but it does put it exactly in line with its in-line competition, however having 14hp more than any of the Japs does sway things  in the Italian’s favour.

More good news for the V4 interested party – the crank pins are offset by 70º meaning the firing order is a big bang configuration giving mourners of the V-twin a familiar twin feel, and a good deal more traction even with the extra power. It also gives it a familiar sound with the motor having a definite V-twin ring to it. 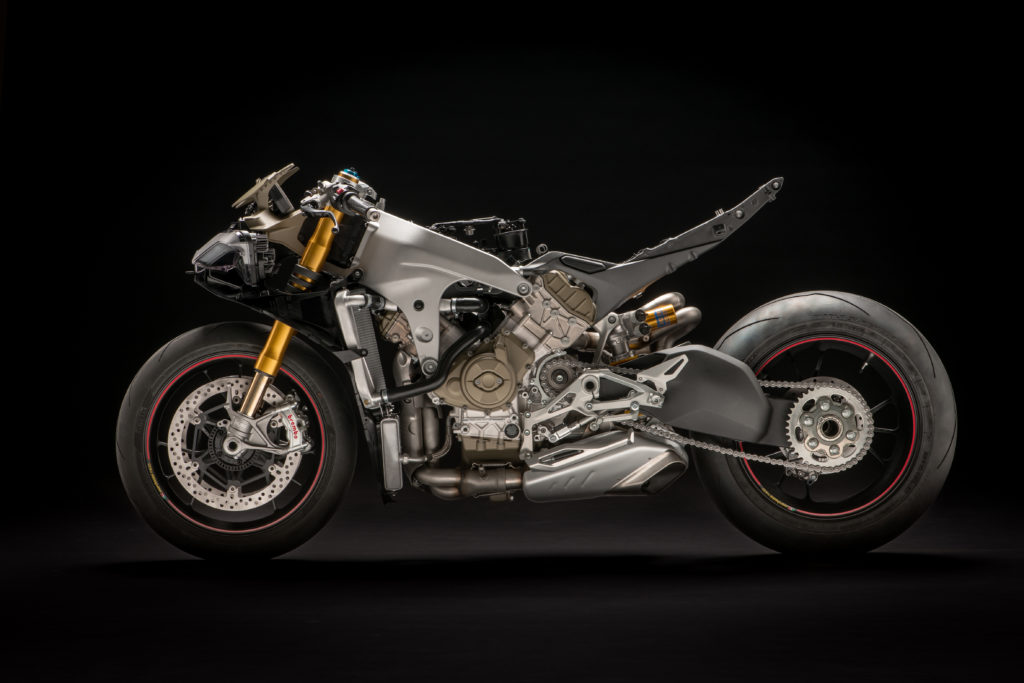 There’s more MotoGP technology in there too, although not only in gadgetry and machinery, but in how to mount stuff, in this case the engine. Much like the MotoGP bike the engine is raked back 42º giving designers more room to add a longer frame than the previous 1299. This means that they can play with rigidity more, leading us to presume that it will not only turn better than the previous model but possibly be more stable too.

On the electronics front, the Panigale V4 has a 6D IMU meaning it also has the latest in Bosch cornering  ABS and slide control. Ducati have also fine tuned the traction control to be smoother and less interfering. The both-ways quick shifter is improved thanks to the new IMU, as it now adjusts its change speed according to the bike’s lean angle making it more stable when changing while leaned over.

Ducati are famous for releasing special and commemorative versions of every model they release, but normally they release the base models first, let them settle for a while and then chuck in a headline grabbing special model. In the case of the V4, it appears that they couldn’t wait. 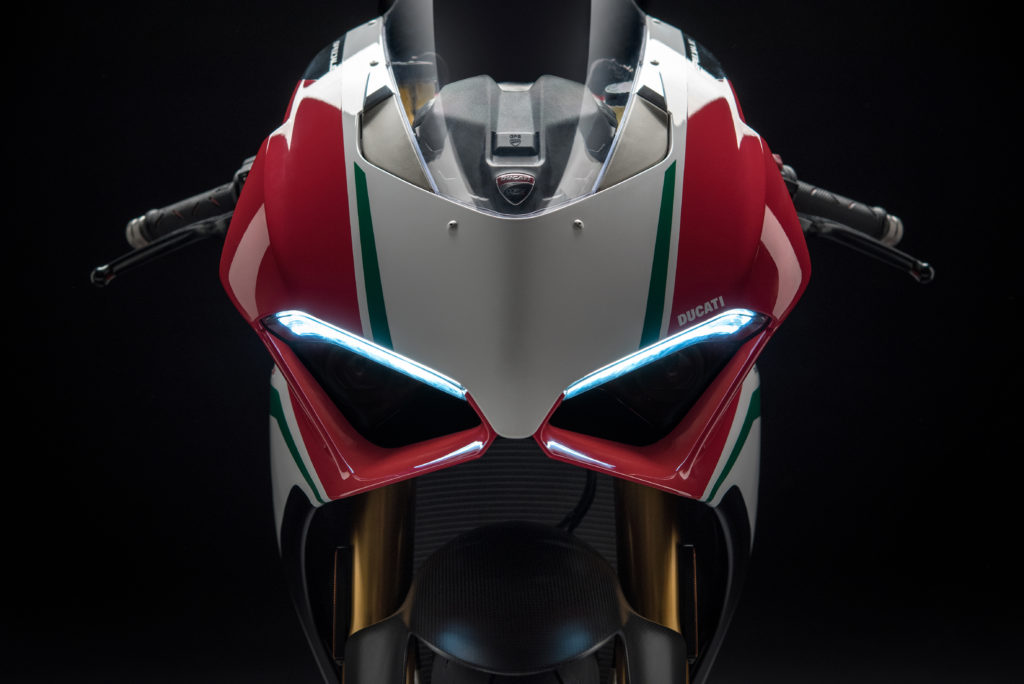 This is the Speciale model that has magnesium wheels, billet aluminium footpegs and fuel cap, an Akrapovic exhaust and a flashed ECU. It’s 10kg lighter and pushes a whopping 226hp.

It will no doubt cost more than a medium-sized country and Ducati are making just 1500. If you have enough money to buy a medium sized country, please buy one of these instead.

Update: The V4 will be available in South Africa from February next year starting with the V4 S model. Prices as follows:

See below for the V4 promotional video and a gallery: