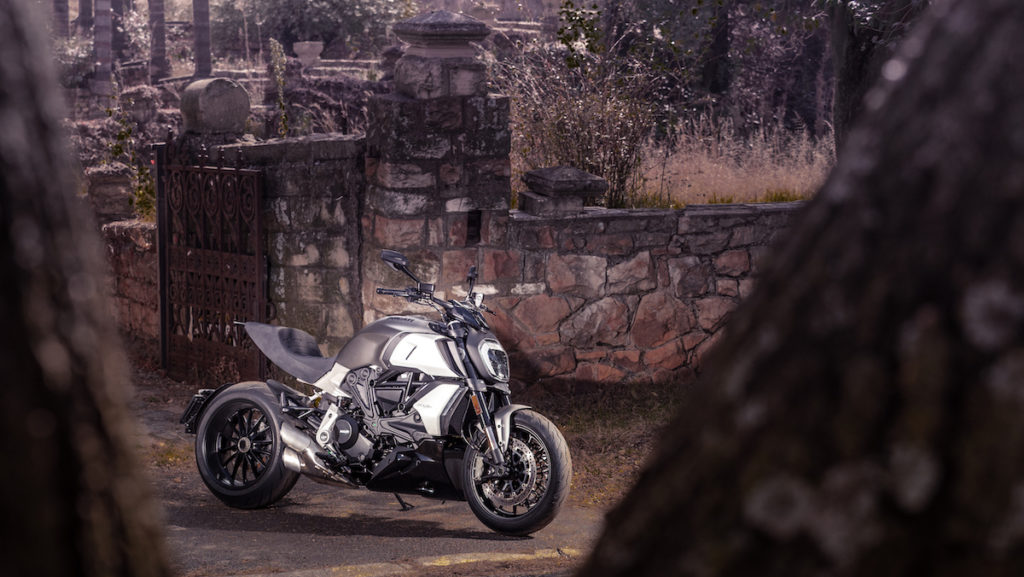 Story: Donovan Fourie
Pics: Meghan McCabe
It seems that Ducatisti love that wind-in-their-hair, bugs-in-their-teeth look. Fittingly, Ducati’s fairingless armada is both extensive and impressive. The XDiavel is the stylish cruiser, the Monster is the big naked, and the much-anticipated Streetfighter is, well, the streetfighter. Then we have the Diavel. It is the muscle bike; the Dodge Charger, the Ford Mustang. Except more homicidal.

When Ducati do something, they go full bore. In this case, they are going Full Muscle. Cast your eyes upon the machine – the 240 rear tyre connected to the single-sided swingarm is beefy and malicious, the exposed motor reveals a chiselled six-pack of abs, the tank is a pair of well-toned shoulders leading into two industrial arms that bench press train carriages. The two snarling nostrils are ready to breathe fire, and the LED headlight is a sharp, rounded, jawline. 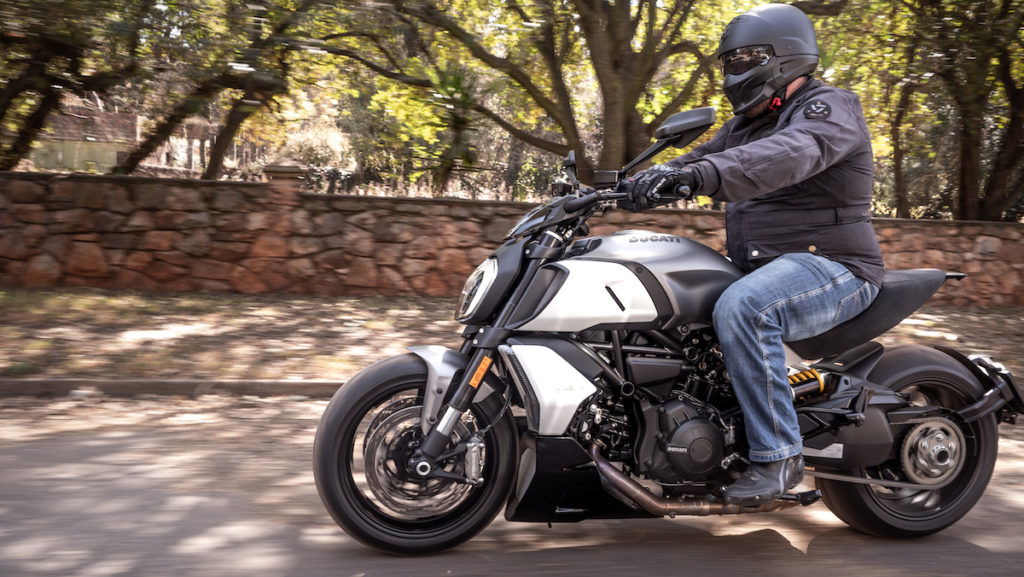 The seat is surprisingly cosy. Unlike the forward-footpegged, swept-back bars of the XDiavel, the Diavel has the rider sitting more upright, with the footpegs almost directly below the seat, and the bars more neutral, offering the rider a somewhat more natural seating with fewer coccyx contusions. You’ll also find that the cockpit follows a similar theme to the rest – the digital, colour dash is small and tucked away underneath the full-width single-piece handlebar held in place by two claw-like clamps.

It is all muscle, all anger and all vengeance.

However, this is no malformed ogre. The conforming tight shirt is from Gucci, the jeans are Diesel, the sunglasses perched on its head are Ray-ban, and the watch is from Rolex. It has style and class to match the gym bod. The Diavel is one of those motorcycles that get better, the more you stare at it, the more you notice details, lines and affects. 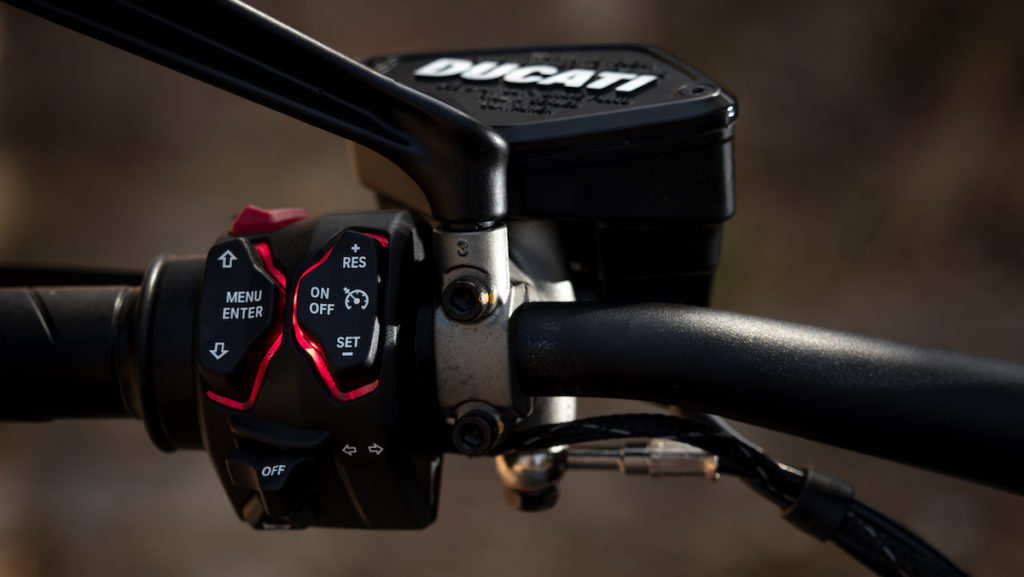 There’s more than muscle and style, though; like many deranged psychopaths, the Diavel has a cunning and sophisticated interior. Apart from the aforementioned dash, there are the obligatory three rider modes with traction control, cornering ABS, wheelie control, cruise control, self-cancelling indicators and a launch-control that will terrorise whole cities. The S-model is adorned further with a both-ways quick shifter, daytime running lights and a multimedia setup. Everything is controlled via handlebar switches that bathe in the red glow of the Diavel’s damned soul.

Of course, muscle style and sophistication are all superfluous without one thing – muscle.
Open the throttle in any damn gear you like, and you are rewarded with a punch; an actual punch. Not a Bruce Lee kung-fu spree, but the full Dolph Lungren blow. One that not only floors you but sends you skidding through various bits of masonry. 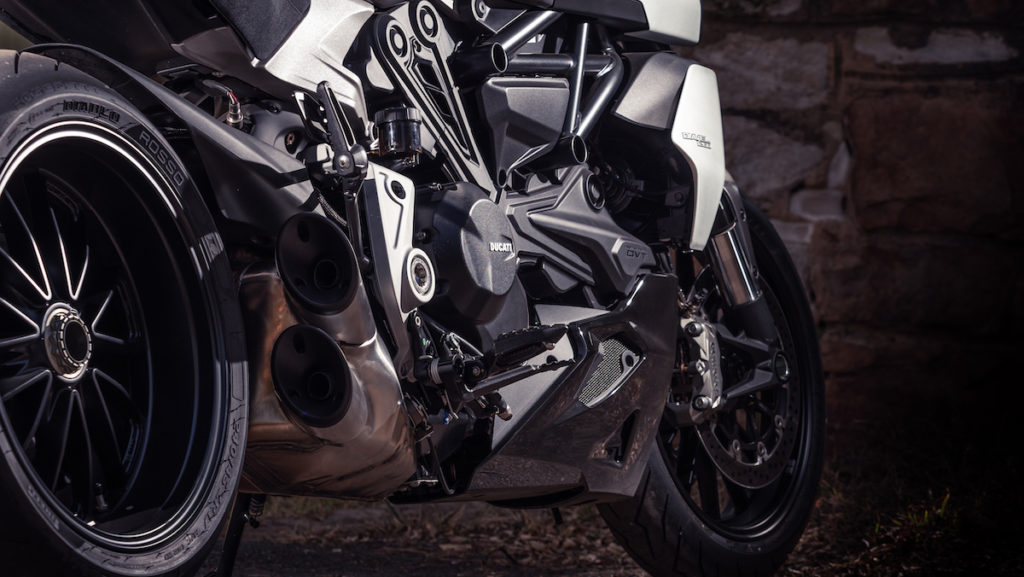 The new Diavel is graced with the 1262cc V-twin motor already fitted in the XDiavel and the latest Multistrada. It’s an evolution of the 1198 engine first seen in the previous iteration of Ducati’s superbikes. The capacity increase is achieved not through simply putting bigger pistons in but instead installing a bigger crankshaft. Because of this, its max performance figures of 159 hp and 129 Nm of torque are almost identical to those of its predecessor. However, the way it gets to those high-revving specs is where all the fun is. Instead of starting slow and building power until the redline, the 1260 seems to start at 159 hp with 129 Nm of torque at idle and stays there until whenever you can be arsed to pull on the gear lever. Adding more fuel to the eternal fire, there’s variable valve timing further prodding it in the bottom-end.

As is the way of big naked and similarly styled machines, they are not about achieving high speeds but rather about the way it gets to them. In this case, it’s with the rage of Beelzebub himself. Open the throttle hard in first gear, and you will be rewarded with a flurry of rear wheel spinning, even when the traction control begs it not to.

Ducati Diavel 1260: Not all malice is perfect 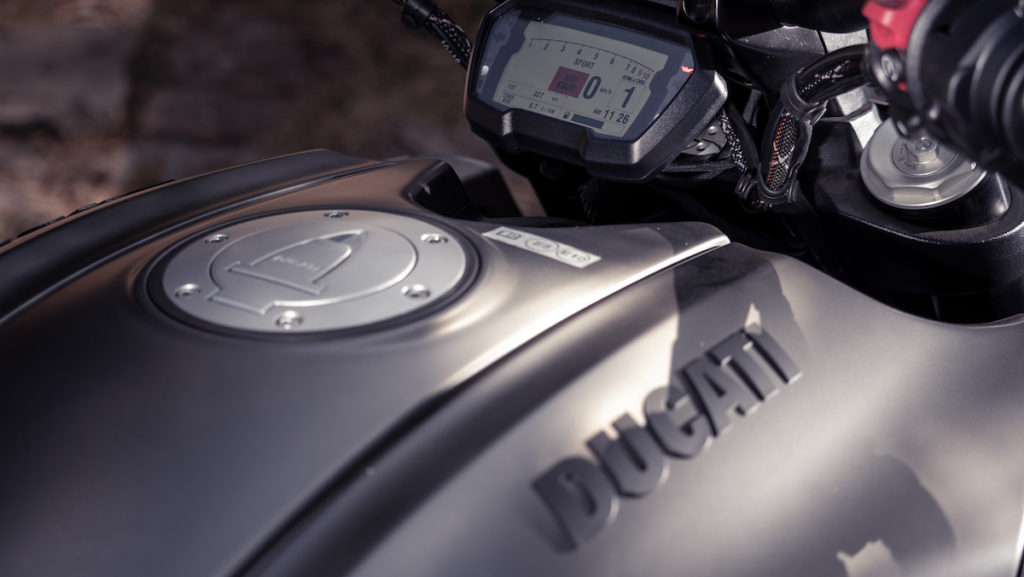 Detouring from the hellfire, the exhaust sadly conforms to Brussels’ latest Euro5 tyranny, offering a muted, almost tinny sounds compared to the growling behemoths within its ancestry. Here is the world in which we tragically now live, and you can be sure that Ducati is even more heartsore about it than we are.

Continuing the critical front, the racing clutch takes some getting used to, and revs at the far bottom-end – slightly above idle – tend to have the odd hesitation, something that is usually a symptom of living in a Jo’burg with our dry, chocking atmosphere a mile above sea-level. Typically, these glitches are sorted out by the factory and go away when the technicians do a software update during one of the services. 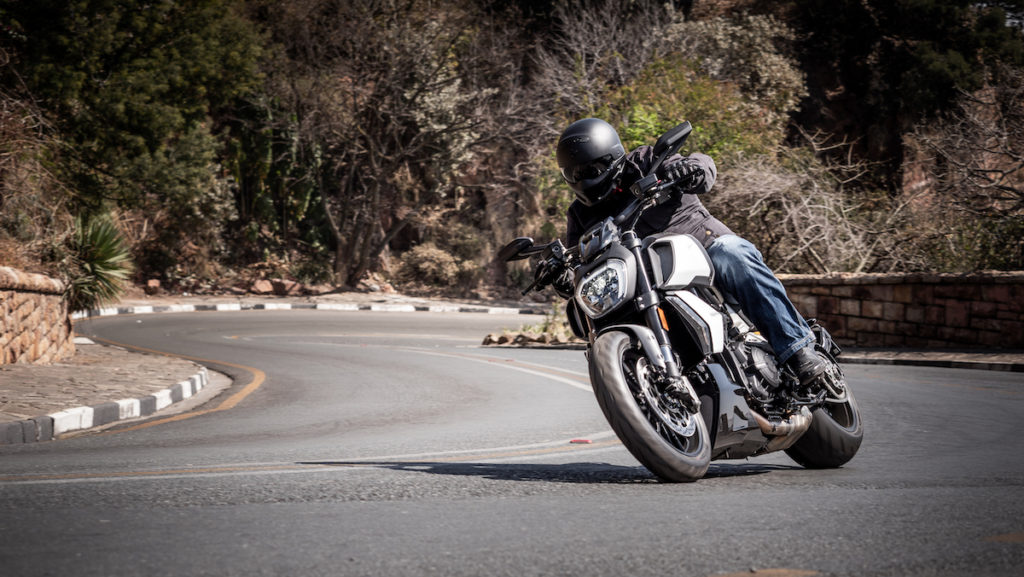 Back to positivity, the brakes on the Diavel are chest-crushingly good. This base model uses Brembo four-pot Monobloc callipers, and while they do not have the sophisticated feel of the M50 stoppers found on the S-model, they do the job of bringing the motorcycle to a halt with exceeding keenness and brutality.
The S-model is also adorned with Ohlins front and rear while this base model sports suspension of the nameless variety, and while I’m confident that the Ohlins provide the best is cornering technology and damping prowess, I’m damned if I could tell the difference while blasting through the streets of Houghton. Not once did I wish for better suspension.

Keeping with Ducati’s theme of sportiness and cornering aptitude, the Diavel will no doubt out handle anything else in the muscle bike class, with effortless turn-in and superior lean angle clearance. The S-model will do it even better, but for the graces of Joburg town and its surrounds, the base model has competence in abundance.

And for a better price, too. The base model Diavel 1260 will set you back R275,000 while the S-model is a little dearer at R313,000. There are those riding connoisseurs that want to hit the Sabie 22, the Cape mountain passes and perhaps even the odd racetrack with their Diavel, in which case the S-model will serve you well. For the rest, the base is everything you will ever need. 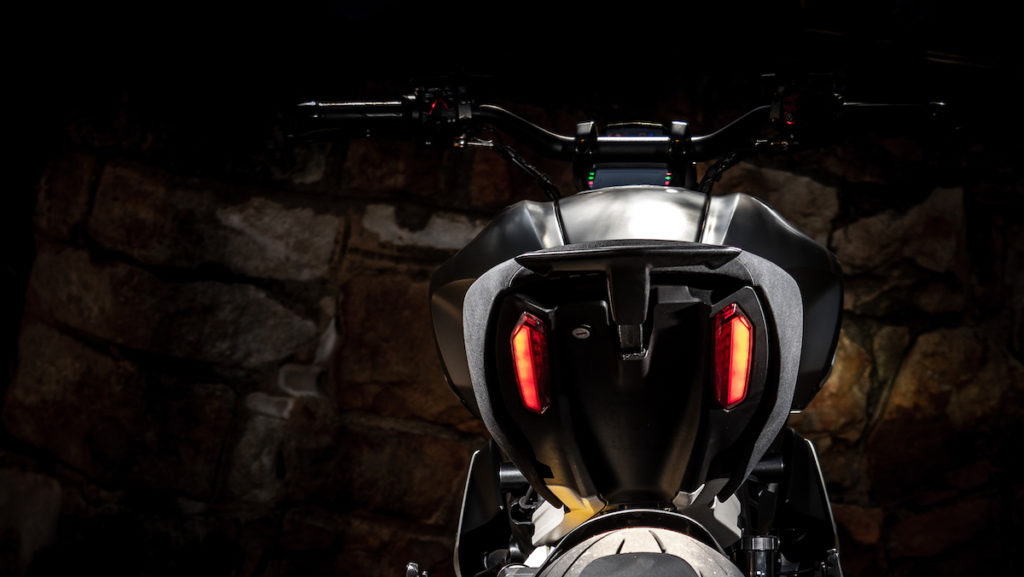 The Diavel is devilishly muscular, stylish and sophisticated. It is the sort of person about which your mom warned you. It is the archetypical bad boy to whom all the nice girls flock. It is shameless. Unapologetic. The apex predator in a social group of mice. It is nefarious in both deed and desire, unleashing a reign of terror on all who stand in its path.

You want to be friends with it.