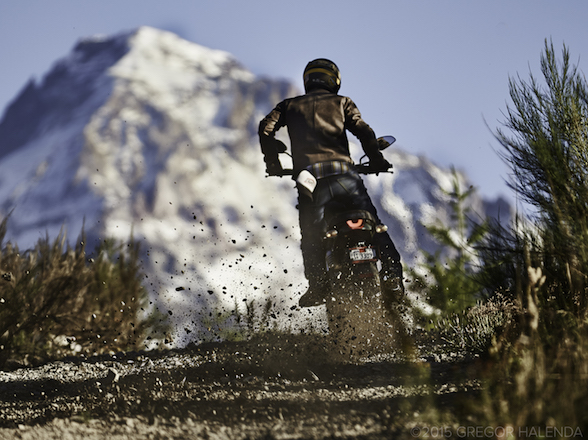 There’s a new breed of motorcycle in town, and it has been confusing some South African bikers. The breed in question has a lengthy history in Europe, and after many years in the doldrums it is making a strong return to the spotlight, but in a much more up-market way.

I’m talking Scramblers, the modern factory interpretation of which involves an expensive road bike wearing the clothes of an off-road bike from yesteryear.
Back in the days before television there really wasn’t much on offer if you wanted a dirt bike, so what you did was take your road bike and bolt on some bits and pieces that you thought might help you not fall off a cliff. These bikes became known as scramblers, because they were used for scrambling – the prehistoric term for bouncing through the bushes while pretending you’re having fun.
Today these antics are called off-roading, or dirt biking, or adventure riding and the bikes used have been designed specifically for that purpose.
The modern Scrambler was first debuted by Triumph back in 2006, and was an interpretation of the existing Bonneville, which is a ‘modern classic’ road bike. And this is where the problem arises, because many South Africans, perhaps not unreasonably expect a Scrambler to be able to handle some dirt. And mountain tracks. And deep sand. And possibly the occasional river crossing.
These demands are met by the current crop of adventure bikes, so get that idea right out of your head. The modern Scrambler will waft you down a very smooth gravel road, but would in truth much prefer an even smoother piece of tarmac.
These bikes, like many 4×4’s in the car world, are more about being seen than being authentic. Do you really think those owners of supposedly off-road vehicles from the likes of Bentley, Maserati and Jaguar are actually going to get their all-terrain vehicles dirty and scratched driving through some bushes?
Of course not, and it’s exactly the same for the modern Scrambler.
Last week I and my two colleagues from The Bike Show test team spent a day with the three major entries in this growing class, and our route for the day encompassed everything these bikes are about. Lots of road riding, a brief but terrifying diversion along a gravel road and then several hours at the pub stood around looking at the bikes and telling tall two-wheeled stories.

Joining the latest version of Triumph’s Street Scrambler was Ducati’s Scrambler Flat Tracker and BMW’s Scrambler version of its R Nine T. These three bikes use twin-cylinder engines that lend the bikes some aural drama and provide easily accessible performance.

All the engines honor the heritage of their brand with the Triumph using a 900cc parallel twin, the Ducati a 865cc V-twin and the BMW a 1170cc Boxer twin. All sound lovely though very different, and all dish out enough horsepower to improve your mood.
If it’s big scrambling horsepower you want then the BMW’s 82Kw will be at the top of your list, though the 56Kw of the Ducati runs it close for sheer entertainment. Wafting along with the Triumph’s 41Kw sounds like it might be comparatively boring, but a healthy dose of torque and magically vibration-free power delivery keep it in the hunt.
With modern engineering underpinning the retro looks there’s no qualms about hurling any of the bikes at a set of corners. I wouldn’t take any of them to a track-day, but I’d be more than happy to embarrass a few nervous sport bike riders down a bumpy backroad.

There’s ABS on all the bikes, and further options like traction control can be specified on certain models. But these bikes aren’t about all the latest electronic gizmos, they’re about a more simple and pure motorcycling experience.

After Triumph kickstarted the class a dozen years ago, Ducati was the next manufacturer to join the fray with its own Scrambler. It has thrown a lot of effort into this new direction, churning out various iterations of the model, including the Flat Tracker and its USA inspired slant on the scrambling theme.
In many ways Ducati’s heritage is the most authentic since it actually had several small capacity models wearing the Scrambler label in the 1960’s. Not that this really matters to the thirty-something hipster whose parents were probably still in diapers way back then.
Despite much pub discussion, verging on pub brawling, there’s no way to pick a clear winner. All look great, all do the job asked of them and all offer many valid reasons for making them number one.

At R179 000 the BMW is the most expensive, but then it has the largest array of gadgets and far and away the most performance. The Ducati is usually the most affordable with this Flat Tracker version now on the floor at R119 000.

The Triumph would normally split the two neatly at R139 000, but the current South African distributorship is busy changing hands and so the current lot are clearing house with some impressive bargains. The Street Scrambler is one of them, and you can now get this bike for R109 000, which means that hackneyed phrase about getting one while stocks last is, for once, worth repeating.
Update: The last stock of new Triumphs in South Africa has been sold. There should be a new importer appointed within the near future.
Story courtesy: The Sowetan