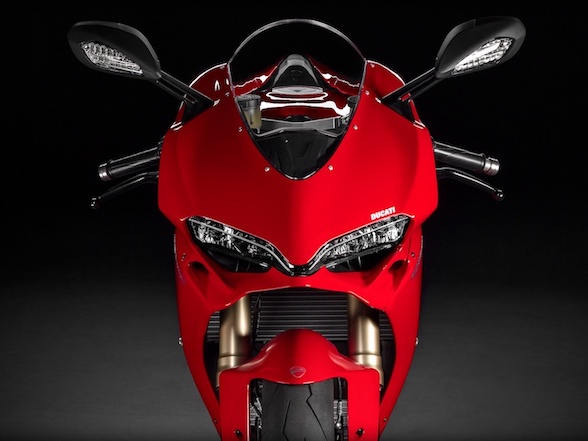 No need for a race bike anymore

The Ducati Panigale S is is the lightest, most powerful, most well-equipped and most electronically sophisticated mass-produced superbike available in 2016. Ducati is just showing off.

But first, the bad old days

As the world plunges ever further into the world of social media dependency, you are constantly bombarded with people posting such motivationals that are summarised with “remember the good old days”.

With this, I thought back a fairly meagre 12 years to when the world first moved on to racing 1000cc superbikes. The year was 2004, and the world had gone mental – gone were the 750cc bikes of old, and now we were locked into the big litre monsters, the howling world of horsepower, light weight and smoking back wheels, with the likes of the Yamaha R1, the Kawasaki ZX-10R, the GSXR1000 and the new Honda CBR1000RR Fireblade, two of which our enthusiastic National Superbike team had taken delivery of.

The bikes arrived still in crates, and the team mechanics got to work getting them PDI’d and ready to roll, because just a weekend later was the first National Superbike round of the year. As they fired up, we donned our road riding gear and did a cool 600km round trip that constituted their running in, and then they were whisked off again by the mechanics and this would be the last time we would ever see them in road trim.

These bikes were completely new, and the first in the country, having been flown in specially, thus the current list of aftermarket accessories available consisted of anything we could make ourselves or have made within a week. One of the road fairings were sacrificed so that a local fairing maker could create a mould, and get to work putting together our race fairings. There were no aftermarket exhausts, rear sets, racing accessories or suspension, thus the unpainted fairings were fitted, and we went off racing.

As standard road bikes, the Fireblade could cut it with any of its competition, but this wasn’t the road, it was the track, and they were cataclysmic bad. They felt heavy, soft, under-powered and lazy. With no aftermarket radiators, they overheated, with no braided brake hoses, you went into every corner unsure whether you would have the luxury of being able to slow down and the gearboxes weren’t undercut, thus you had to beg and plead with them to change down for the corners, and there were about three false neutrals between every gear. The suspension was actually pretty good…for about three laps, at which point it began overheating and became a fun jumping castle for the rider to bounce up and down on. This all sounds fun, and it was, but it wasn’t conduive to doing good lap times.

You might think that we are needlessly picking on the 2004 Fireblade here, but other teams were battling as much. The R1 was also new and without accessories, as was the ZX-10R. The only bike that wasn’t brand new and had kit was the GSXR1000, and the two works bikes won by nearly 20sec. At that stage, we were not upset, because that is how it was with standard motorcycles – they simply couldn’t keep up with the strains of racing. When we got our suspension and other parts, they were transformed, and we were on pace again.

And now, ladies and gentlemen…

All these thoughts took place here and now 12 years later while lapping both Phakisa and Red Star on the new Ducati 1299 Panigale S, and there was much in-helmet chuckling. This bike was Ducati’s demo, which was armed with headlights, indicators, mirrors and even a numberplate, and there was barely a sound permeating out of its Euro3-compliant exhaust. In fact, most of the sound from this motorcycle emits from the airbox, giving it a distinct, sonorous, primordial growl.

Track days are good fun, because they contain the same intensity as racing, but without the soul-destroying pressure, and we were mixing it with some ZX-10Rs, new R1s and S1000RRs, and it was just good fun. We pushed as hard as we dared, overtook cleanly and had a good chuckle about it afterwards, with many a rider amazed at their new-found lap time success, will others looked philosophically at their timers, wondering where from the next 0.2sec saving would come.

What was interesting is that we had just done a cool 10 laps of the track – about as much as most races in this country – and after some time I had completely forgotten that I was riding a stock road bike. In standard trim, the Panigale S is equipped with shiny gold Ohlins, both front and rear, Brembo braking systems, a class-leading 205hp, another class leading 144 Nm and all that we would have previously constituted as “aftermarket”. It did everything it was asked to, and often better than bikes that had R100,000 dropped on them.

In fact, it often did things better than it was asked. The range of electronic aids are controlled through the colour dash, and once everything is set up to your liking, it then takes control.

In the lower settings it allows a good deal of idiocy. For example, if you crack open the throttle hard while still lent over in a slow corner, there’s a good chance you will be thrown high enough to see the earth’s curvature. But, then again, if you are coming out of a sweeping corner, and you roll on the throttle a little too hard, the back of the bike will drift round, a little light will come on on the dash to say “you are so lucky to have me here” and the bike will continue in a beautiful, controlled drift much like the one you wouldn’t have been able to do if left without an electronic parental. If you are not interested in any of those sort of things, simply turn the electronics off and it will all disappear.

Over and above the usual aftermarket-but-standard kit is the likes of an autoblip on the downshift to accompany the more-frequent-nowadays-but-we-didn’t-know-anything-about-them-in-2004 quickshifters. This means that once you leave the pits, you can take the clutch lever off and put it in your pocket.

It sounds quite ridiculous – a device that means you don’t have to use a clutch when you change down for a corner, but after using it for most of a day, it’s quite hard to return to normal. Later in the day, I rode a “normal” motorbike, with no autoblip.

When you are approaching the corner and have to slow down, you go through the normal laborious task of having to close the throttle and pull the brake lever. Once you have gotten your breath back after all that exertion, you have to strain your already exhausted left hand by pulling in the clutch lever and hold it in while your foot pushes desperately on the gearlever, and then your now dangerously oppressed hand must now release the lever, but not by simply letting it go resulting in the back wheel getting out of shape, but slowly to keep things smooth. And you don’t do this once, but maybe ten times a lap!

It’s all so unnecessary!

If anyone thinks that we are perhaps over exaggerating, go ride a Panigale or any bike with an autoblip for most of a day, and then get on a normal bike. That is exactly how you feel.

Also not on the usual aftermarkets list is the weight of the Panigale – 190.5 kg wet. Let’s put that into perspective – the next lightest in the big superbike class is the Yamaha R1, which is 199kg.

Apart from Ducati using lightweight materials, this massive anorexia is aided by the fact that the 1299 has no frame, and uses Marchesini wheels. Again, these would normally be considered aftermarket, and come close to the likes of BST carbon-fibre wheels for lightness, and contributes hugely in the 1299’s agile feel and confident front end.

If I were to race this motorcycle, I would change the fairings, only because the standard ones would be expensive to replace in the event of a crash, I would go a few teeth shorter on the gearing and because I have a “fuller figure” than the typical Italian, and I would put in stiffer springs in the suspension.

Many a reader might be pointing to the exhaust, saying that surely we should change that but, actually, no. An imported aftermarket exhaust is going to cost more than R50,000, and would you like a little secret? It will make no difference to the performance. The headers on modern exhausts come out of the factory as good as they can be, losing the catalytic converter will save a few kilos, but those are right at the bottom of the bike so won’t make too much difference, and the aftermarket silencer will be louder, and that’s it.

You can go for an aftermarket airfilter and a fuel mapper, but these are going to make small differences. Basically, the 1299 S is a race bike straight off the showroom floor. You could buy one, and race it the next day. I say this with confidence partly because of the two track days we attended on the 1299, but mostly because that is, literally, what we did previously with an 1199 Panigale S. After the first few arrived in the country, we took one, ran it in and immediately raced it. We didn’t even have a chance to put fairings on it. And I set my best ever time around Phakisa that weekend.

The modern world faces many problems for people personally, politically, socially, environmentally and economically, but bikes these days are better than any bikes ever have been, and the Ducati Panigale 1299 S is on the front line.