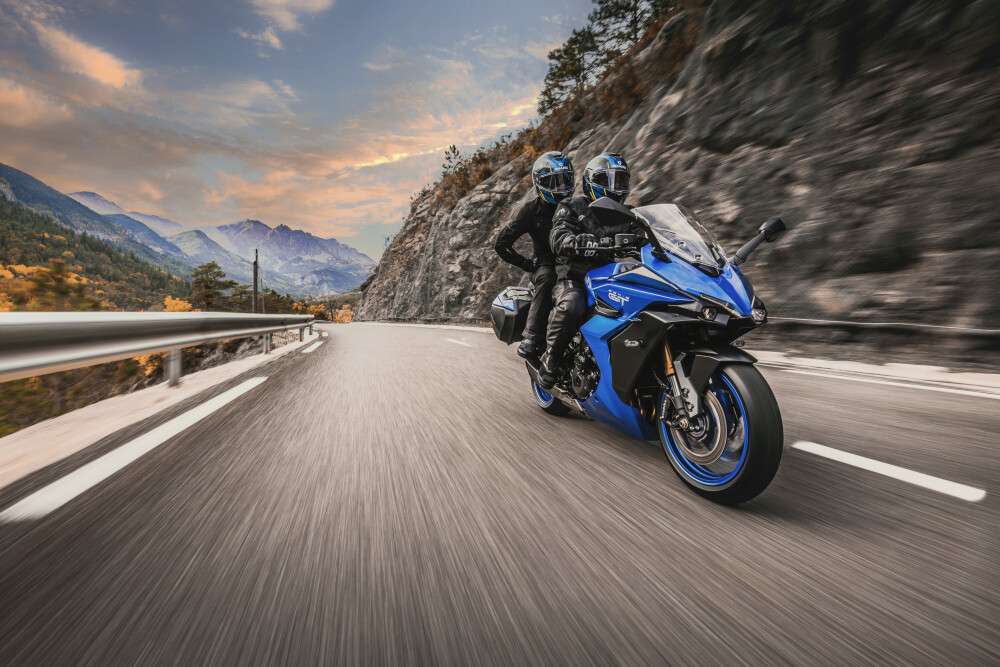 Earlier this year, Suzuki teased a new update for the GSX-S1000S and F models, motorcycles designed for sports-touring using an older GSX-R1000 superbike motor that was re-tuned for easier road use. It was good fun to ride, and The Bike Show crew even fielded one in the Red Star Endurance Racing Series on the grounds that comfort over the hours was more important to the slovenly presenters than winning.

It proved to not only be comfortable but also a fun track machine, even if not quite up to speed with the superbike equivalent. It was reliable too, with two years of endurance racing under its belt and still going strong. We even accidentally set it on fire once and still finished the race.

Now, Suzuki has had a full reveal showing a radically revised “GT” model, something that looks futuristically robotic, as is the tradition in Japanese motorcycle design cultures. The previous single headlight has been replaced by two LED units accompanying a pointier front, new plastics and new colour schemes.

The motor is still based on a previous GSX-R1000 superbike but has been revised to comply with Euro5. The power is up by two horsepower to 150hp total, while maximum torque output is strangely down to 106Nm from 108Nm. Although, like many modern motorcycles, we can bet that most of the power improvement is found in the mid-range rather than the top-end. Suzuki has claimed faster acceleration over 200m and 400m than the previous model, so obviously something is better.

What Suzuki has boasted is the touring nature of the motor, claiming smoother power output with fewer vibrations, especially with the new rubber-mounted handlebars and rubber footpegs.

It also now has electronics with a new TFT screen, phone connectivity, traction control, rider modes, cruise control and a both-ways quick-shifter. The new, light-action clutch works with the new throttle bodies for better low-revs performance and an easier pull-away. The new starter system requires one push of the starter button to fire up the motor.

The fuel tank is up to 19L for a better range while the KYB suspension has received updates for better road handling. The previous model was a peach to turn into bends, and Suzuki has claimed this one is even better while not necessarily explaining changes to the frame design, noting only that it is a twin-beam alimunium unit with an aluminium swing-arm, much like the last one.

Either way, the last one was really good as a sports bike, and as a sports bike over a distance of, say, an endurance race. This one can only be better, and we are looking forward to it immensely.

Suzuki South Africa is expecting the GSX-S1000GT sometime in the second quarter of 2022. The price is still to be confirmed.