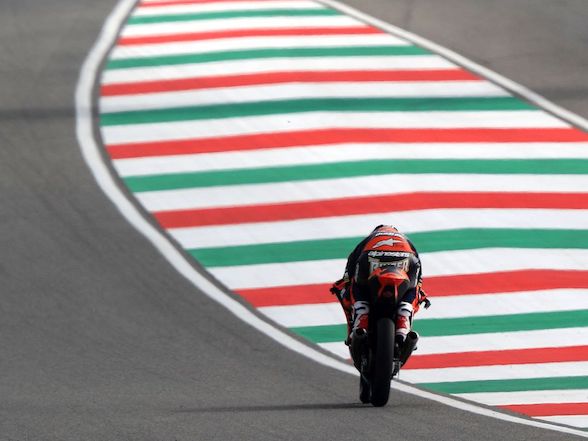 Darryn Binder at Mugello: “it is very important to find a good slipstream”

Today’s race starts at 11am, and Darryn Binder finds himself a good way down the grid in 25th place.

The weekend started well for the South African, especially in FP1 on Friday when he spent the majority of the session in the top ten, being bumped down to 16th only the last stages. Things were looking good nonetheless with him having to work on direction changes, something that’s important at Mugello with its series of fast esses. There were plans afoot to improve on Saturday.

During FP3 on Saturday morning, Binder spent the session mostly on used tyres in order to get a good feeling for the race ahead, a wise choice given that FP3 doesn’t count towards anything in Moto3. In Qualifying he was given two sets of new tyres, and set off for a time attack, however despite beating his personal best time, the competitiveness of the Moto3 class left him in 25th before the race.

Much of this was put down to not finding a slipstream during Qualifying which can take off as much as half a second off a lap time, something even more important for the lanky South African who, if we are honest with ourselves, is too tall for a tiny Moto3 bike. However, despite the lowly qualifying place, the long straight of Mugello and the slipstream effect does give riders ample opportunity to make good on, say, a poor qualifying.

“Today [Saturday] was a difficult qualifying session. I struggled a lot during the whole session. Despite giving 100%, I didn’t manage to set a good lap at any time. I couldn’t go fast because I didn’t feel comfortable on the bike. In addition, it is very important to find a good slipstream on the long straight at this track, and I never got one. I hoped things would go better and I would be able to make more progress than yesterday. The result is what it is, the important thing will be tomorrow in the race. I’m sure it won’t be easy, but I don’t want to rule out any option. We still have time to get a good result at Mugello.”