Round three of MotoGP is happening at the Circuit of the Americas in Texas today. For this year, they’ve emulated their Supercross brethren and included sand and some jumps to the circuit. Shifts in the ground have caused some rising tar on the circuit, and to alleviate this the circuit owners have ground down the tar on the bigger triple jumps. This has perhaps helped, leaving only a few doubles, but the grinding has left the circuit covered in a white dust. Michelin were not forward thinking enough to bring knobblies. 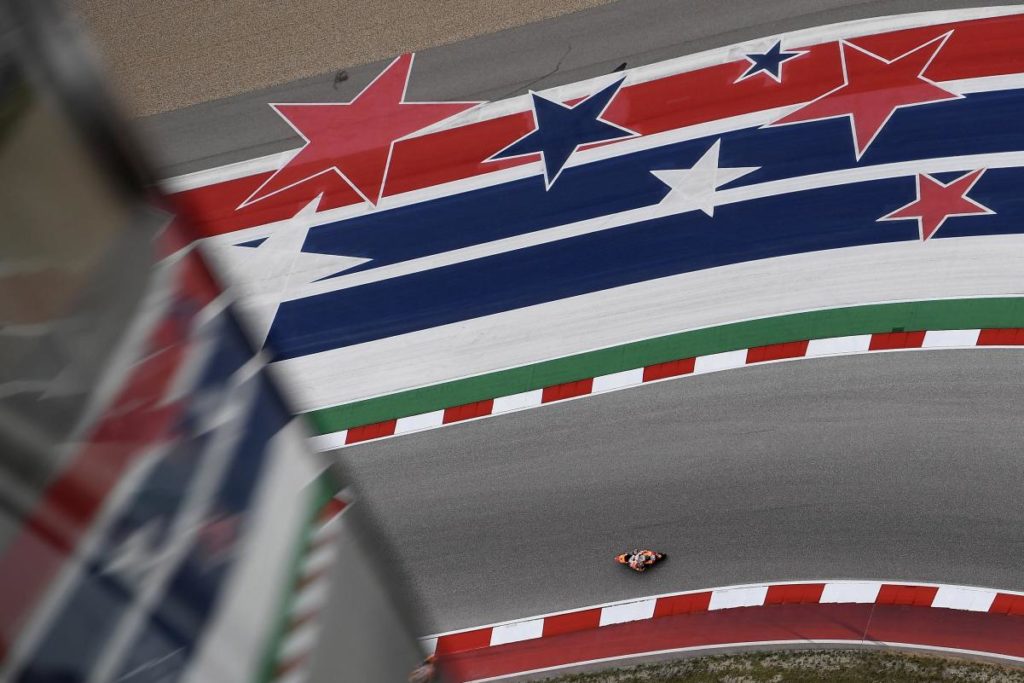 Still, despite the gripes of the riders, racing continues and after a day of clouds and potential precipitation yesterday, the weatherman says it is going to be sunny and dry for the race today.

That means that Marquez should win. This is not an attack on the world champion, but rather a lamentation of the fact that the race is going to be hugely predictable, hugely uneventful and hugely boring. This is MotoGP, and nothing is certain, but Marquez has this track nailed. And so he should; it suits him perfectly.

Firstly, it runs anti-clockwise and is therefore littered with left-handers, a type of corner Marquez prefers, and I’m with him on that. Left-handers are just better, nicer, friendlier and help little old ladies across the road. Right-handers are stupid, mean, ugly and kick puppies. Quite frankly, they should be banned.

Then there is the two thirds of the track that consists of stop-go corners. For these corners you need to brake like hell, plant the front end and worry not if the rear goes wayward. Run hot into the corners on the brakes with the front tyre pressed onto the surface like Prestik, stop the bike, point it in the right direction, then whack open the throttle and blast out.

This is pretty much what Marquez does every corner, and it works better on the tight ones. This has shown so far after two days of MotoGP practice. Marquez was fastest in FP1 on Friday with a gaggle of riders right behind him, and he was second fastest in FP2. This doesn’t sound too dominating, but while the other riders went out with new softer rubber and no doubt drained fuel tanks, Marquez was circulating with used hard tyres concentrating on race pace. In other words, Marquez’s race pace is the same as the other riders’ hot laps.

It was much the same with FP3, but FP4 is where we see a better indication of race pace because there is no need for a hot lap. Marquez ran consistent high 2:04s. Vinales has found some new electronic settings and form, and was also running 2:04s, but mostly 0.3sec a lap slower than Marquez.

In a dry, sunny race, you can predict what will happen. Marquez will get a decent start, and won’t do anything silly for the first few corners. After Argentina’s debacle and the subsequent bollocking he received from all quarters, he cannot afford any dodgy torpedo moves, unless he wants some severe penalties from The Stewards and to go down in history as MotoGP’s Biggest Wanker. 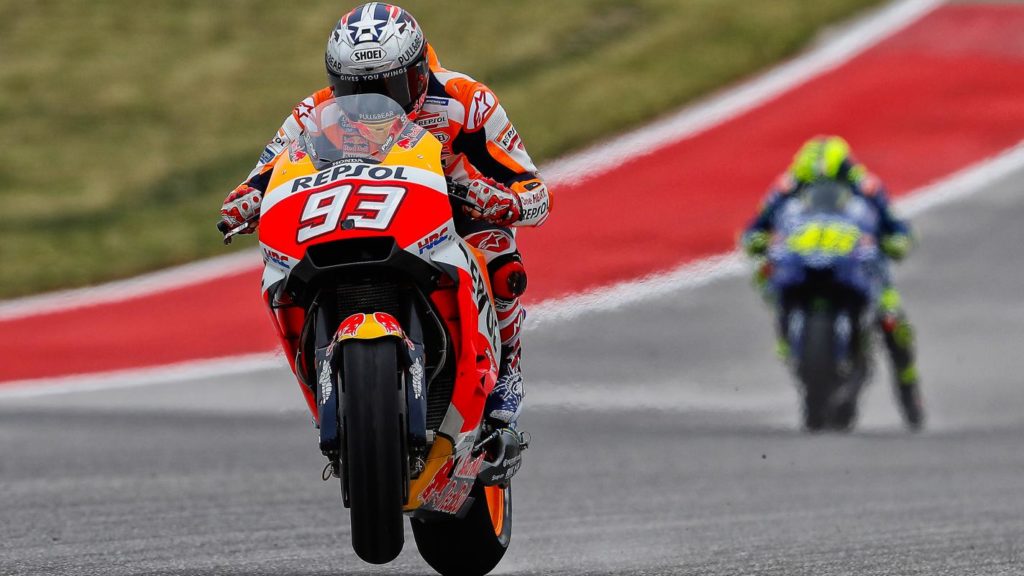 Things very nearly went wrong already during FP4 when he came to within an inch of harpooning Tito Rabat in the Turn 11 hairpin. Luckily, he managed to get the bike stopped before he made heavy contact, and Rabat got away with a mild love tap from Marquez. Then there was that incident where he held up Vinales in Q2. He received a grid penalty of three spots, leaving him in fourth on the grid. This seems fair – it’s not enough to ruin his race, but it is enough to tell him not to be a dick. I feel more sorry for the three riders in front of him though. Perhaps they will get specially fitted rear view mirrors for this race, and early warning systems telling them when something orange is approaching.

Back to today’s race – COTA is an abrasive circuit. A few hard laps on a set of tyres and they will very quickly become knackered, so Marquez will bide his time, keep in a decent spot until either he notices the other riders having difficulties, or until there’s less laps on the board and with tyres that are still very decent, he will get past, pull a gap and win.

Vinales might pull something out of the bag and give Marquez a hard time as he has shown commendable pace, but it still looks as though Marquez has the upper hand.

This is MotoGP. As we saw in qualifying, things can go wrong, and weird things can happen, but probability suggests that it will go much like it is written above. This is why rain would be so much more fun. It makes it unpredictable.

This isn’t a bid for Marquez to not win the COTA race – he probably still would even on a wet track – but rather a fan of racing that fears the worst outcomes of all – a boring race.

The COTA MotoGP race will be shown at Rim & Rubber in Fourways. See you there.

Previous Post Sheridan Morais to stay in WSS for the rest of the year?
Next Post SA's Mathew Scholtz wins Texas MotoAmerica Superbike Race One