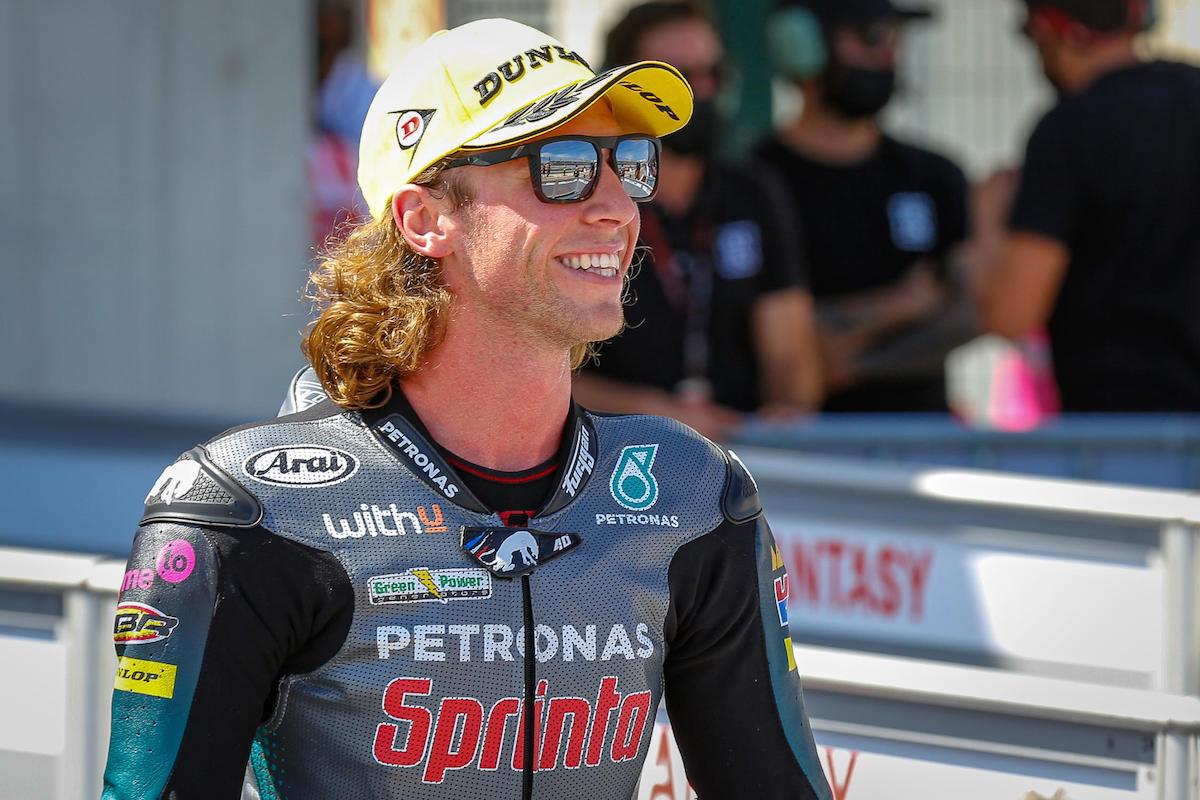 Darryn Binder has been getting a lot of flack recently. Perhaps it has something to do with an incident involving Dennis Foggia and maybe some loss of championships. It’s weird how having your life dreams unfairly yanked away from you has a tendency to cause upset.

Recollections of the incident by various media and other riders can be summed up in something like this: Foggia was innocently taking the corner while thinking about world peace and feeding poor starving baby orphans when Binder came from 37 bike lengths back, let go of the brakes, aimed squarely for poor Foggia and rammed him off the track. Binder then accelerated away, laughing a Dick Dastardly laugh and high fiving the crap out of himself. Obviously, this sort of behaviour is to be expected from the long-haired Satan worshipper. It’s well known that he rams at least 17 people off the track every race. And that he got his MotoGP ride by locking Razlan Razali’s family away in a basement and torturing them mercilessly until Razali gave Binder a ride. Everyone knows this is true. He was disqualified from the race, but everyone knows it should be the death penalty.

The above seems outlandish but, worryingly, not as far from what was actually said as you might be comfortable with.

We will come to Binder’s defence here somewhat, and that might seem obvious because this is a South African website written by South Africans. Then again, the incident here was very similar to the incident at Catalunya in 2019 when Jorge Lorenzo skittled title hopefuls Andrea Dovizioso, Valentino Rossi and Maverick Vinales. In that incident, we came to Lorenzo’s defence, too.

Here is what Binder was doing leading up to the corner where the collision happened – with it being the last lap, fourth place wasn’t the best spot, so Binder had to pass Garcia quickly. He wasn’t close enough going into Turn One but was close going into the hairpin Turn Three.

Overtaking is simple – line up the inside of your opponent, wait for them to brake and then brake a little bit later. That’s precisely what Darryn did to Garcia going into Turn Three, and with the complexities of racing going on, that’s the only thing he or anyone else would be concentrating on at the time.

And the manoeuvre went swimmingly when you look at it in isolation. Binder had gone smoothly up the inside of Garcia, giving him enough room to see him and might run only slightly wide, which is quite normal in a Moto3 overtaking.

At the same time as Binder went up the inside of Garcia, Pedro Acosta was trying to get his championship on by doing a similar move of Foggia, passing him brilliantly up the inside. Foggia, being the decorated motorcycle racing professional that he is, counteracted Acosta’s move by letting him through, squaring the corner off so that he had a straight-line exit and was hoping to get enough drive to get back past Acosta.

Both Binder’s move and Foggia’s move were perfectly reasonable. In isolation. The problem is that they were not in isolation and were instead happening at precisely the same time, leading to a chain of unfortunate events.

Binder, trying to pass Garcia, was running into that bend a little too hot, while Foggia was bringing his bike to a near standstill and trying to re-pass Acosta. When Binder first started his move, everything was all hunky-dory, and there was no one trying to stop in front of him. Meanwhile, Foggia wasn’t to know that a Binder was coming in hot on account of him not having rearview mirrors on his Moto3 bike.

By the time Binder realised a Foggia was squaring off the corner, he was already braking as hard as possible, and Garcia was blocking his path to go around Foggia. He could’ve attempted to go up the inside, but that would have been difficult at full braking and would most likely have resulted in him hitting Foggia while skidding along the tar. In fact, Binder’s only option was to stand the bike up straight, clench his buttocks and pray like hell.

It kinda worked – after all, Binder didn’t crash. Foggia might have been less pleased with the outcome. The clue was in the way he and his team were not interested in Binder’s apology after the race. That’s not really surprising – Foggia was very unlikely to have won the championship even if he had beaten Acosta at Portimao. However, after such a brilliant second half of the season, it must have been heartbreaking to see the championship fight end in such an unceremonious fashion.

And Binder kept on apologising, even in his press statement that mentioned nothing else apart from the apology. I’m not sure the apology is wholeheartedly required. It was entirely innocent when Binder started the move, as was Foggia’s attempt to counteract Acosta.

Binder might not have had to apologise so much, but he did. That’s the sort of guy Darryn Binder is.

Then, he was disqualified from the race. This, too, has caused some comments. Some say he should have had the death penalty, while others find it over the top. Both points of view have some merit.

The idea that it was right to have Binder disqualified stems from the recent judgement against Deniz Oncu, where he was given a two-race ban after taking two riders out at COTA. Then again, Oncu was already on thin ice after taking out two riders (one of them Binder) at Jerez.

The penalty supporters then mention that Binder has a history of reckless manoeuvres, pointing their fingers at Sachsenring earlier in the year when he took out Joel Kelso, earning him the nickname “Blind Rhino” in Australia. We will let them have that one – Binder collided with Kelso during qualifying while accelerating through the first corner after leaving the pitlane. Hanging off the inside of the bike, he failed to see the cruising Kelso and gave him a whack. Interestingly, Binder went down, and Kelso did not.

The penalty supporters might point to that incident but should probably remember that it was more down to brain farts than reckless attempts to pass his fellow riders. We then ask the penalty punters to name another example of Binder taking anyone out in the last two years. We couldn’t remember any other incidents. Nor can anyone else.

His reputation as Dive-bomb Darryn stems from his days with the CIP Team when KTM gave the team a pair of donkeys instead of motorcycles. He and teammate Tom Booth-Amos were as much as 15 km/h down on the top bikes, causing them massive difficulties, especially when overtaking. With the ability to slipstream close to their opponents not available, the only option was to brake late and dive in hard. Or just come last. Binder did not give up his whole life to come last.

Since his move to the SRT team, Binder has struggled a bit with acceleration out of tighter corners because of his height and weight, but his straight-line speed is a good deal better than before. And the number of times he has taken anyone out because of aggressive passing is now on zero. Well, before Portimao, it was on zero…

That brings us neatly to the other end of the penalty argument – was it not a bit harsh? Many point to Iker Lecuona, who took out local boy Miguel Oliveira in the MotoGP race, not getting a penalty, but then he fell also, so he was subjected to a self-inflicted punishment.

I’d instead turn our attention to Remy Gardner, who, like Darryn, is a well-liked guy in the paddock. At Misano, he took out Somkiat Chantra in a manoeuvre that was worse than Darryn’s. We say it was worse because, unlike Darryn’s move that started out well and turned bad, Remy’s move was bad from the moment he tried it, completely misjudging the simple overtake and sending Chantra sliding.

Remy was given a long-lap penalty. Darryn was disqualified. Why?

Some might say it was because Darryn took out a championship contender, but that makes no sense. Will the next rider safety meeting minutes read: “it’s okay to take someone out as long as they are not important”?

It seems more that the Race Stewards have been using Darryn as a guinea pig for testing harsher sentences – whenever Darryn does something that was previously remedied by a slap on the wrist, he gets the full book thrown at him. Some would say it’s because of his reputation, but he’s been rather well behaved recently. At least, in the last two years, so it’s not that.