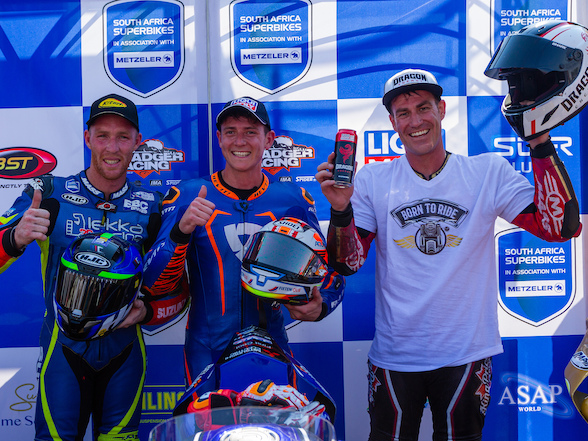 Seller started the day well in the first of Friday’s three qualifying sessions, leading the way from Steven Odendaal (Petra Racing Yamaha R1) and Allan-Jon Venter (Lekka Racing Suzuki GSXR 1000) with championship rival Lance Isaacs (SuperBets Gaming Group BMW S1000RR) in fourth. The next couple of sessions saw Odendaal come out on top and at the end of the day, he claimed pole position for Saturday’s two races. Seller had to settle for second, with Garrick Vlok (DCCS Coring Cutting and Sealing Yamaha R1) joining them on the front row. Isaacs headed the second row of the grid with Venter and Byron Bester (Hi-Tech Racing Yamaha R1) rounding out the top six.

Odendaal grabbed the lead from the start of the opening race but it was brought to a halt after a couple of laps when one of the Supersport riders fell and his bike ended up in a dangerous position on the side of the track. Once the bike was out of the way, the race restarted and Odendaal again took the lead with Seller not far behind. The rain that had been threatening all morning had started to fall by this stage, making things difficult for the riders. Vlok was the first to fall victim after the restart, crashing out of third place at the end of the long straight. Venter joined him on the sideline shortly afterwards allowing Isaacs up into third. The leading trio closed right up to each other while still managing to pull out a comfortable gap over the chasing pack but, as the track dried, Odendaal opened up a gap at the front. Isaacs also dropped back slightly and at the end it was Odendaal who took the win from Seller with Isaacs in third. Bester was next up with Dylan Barnard (NPL Yamaha R1) in fifth.

Seller knew that all he needed to do was finish the second race to claim his sixth title, but that didn’t stop him from trying to win it. He took advantage of a poor start by Odendaal to grab the early lead but, once Odendaal made his move and took the lead, Seller was happy to remain in second place and secure the 2019 championship. Behind the leading duo, Vlok and Venter were engaged in a great battle for the final podium position, with Venter finally getting the better of Vlok shortly after half distance. Isaacs had no answer to the front runners and had to settle for fifth ahead of Bester and Barnard.

In the day’s overall standings, Odendaal took the win from Seller and Isaacs.

As he was last time out, Jared Schultz (ASAP Yamaha R6) was the quickest of the 600 riders in all three qualifying sessions, taking pole position from Dino Iozzo (King Price Xtreme Yamaha R6) with Kewyn Snyman (Hillbilly Racing Team Yamaha R6) in third. Baker had to settle for fourth ahead of Taric van der Merwe (Hi-Tech Racing Yamaha R6).

Schultz was the early leader in the opening race, opening up a comfortable gap, but had to do it all again after Snyman clashed with Iozzo, crashing out of the race and bringing out the red flags. Schultz and Iozzo battled for the lead after the restart but, when Schultz took the lead for the final time, he was able to pull away and take a comfortable win. Iozzo took second with Baker happy to bag the points for third knowing that his only championship rival wasn’t going to score anything.

Schultz looked like he was going to take an easy win in the second race but, just two laps before the end he crashed out, leaving Iozzo, who had got the better of an early race duel with Snyman, to take his first win of the season. Snyman finished in second ahead of Baker, but third was good enough to make sure Baker retained the title he claimed for the first time in 2018.

On the overall standings for the day, Iozzo claimed the win from Baker and Schultz.