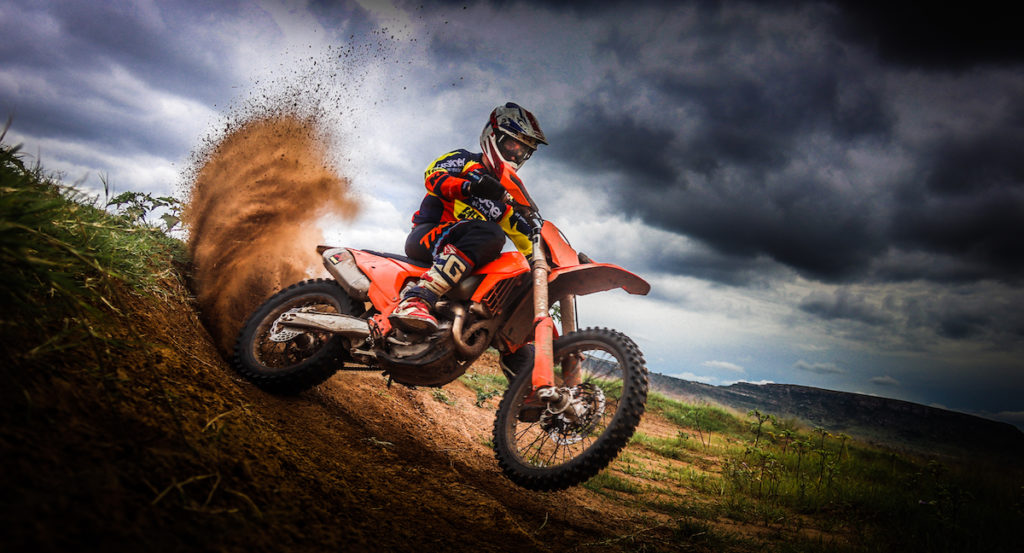 Pic: zcmc.co.za
“Despite the current times, KTM South Africa remains committed to believing in the best possible outcome and sharing positive news. It comes with great excitement, then, to announce that rising Cross Country rider Charan Moore has officially signed on with Brother Leader Tread KTM,” reads the excited press release from KTM South Africa. He will now represent the team in the National Cross Country Championship taking with him the red plate in the OR1 class after winning the season opener in Lesotho.

“I have always seen the KTM team as the pinnacle of our sport. As a youngster the riders I looked up to, like Alfie Cox, Darryl Curtis, Riaan van Niekerk and Louwrens Mahoney; were all a part of this brand and team. To say joining this team is something I had dreamed of is an understatement. I think that this opportunity has come my way after years of hard work and I wouldn’t have it any other way,” said Moore.

Motorcycles have always been a part of Moore’s life. As a child, his early years were spent going to races and his passion for riding naturally followed. “I remember spending hours at the races supporting and admiring the riders – daydreaming of one day being one of the guys on the track,” he explained.

At 16 years old Moore entered into his first full year of racing and has spent the last 12 years living his passion. What started as a goal to simply cross the finish line soon progressed into the ultimate goal of attaining the number one plate.

He went on to snatch up three Regional Championships, one National Championship, and a top 10 finish at the Roof of Africa. He has also received an International Six Days Enduro (ISDE) gold medal and represented South Africa three times in the 2014 and 2017 ISDE; and 2018 Motocross of African Nations. At the end of 2019 things really started coming together for Moore when he stormed to OR1 victory in the GXCC Racing Series and finished second overall at a National event.

“This was huge for me, so to start 2020 by taking my first overall win at a National event felt like a culmination of all the hard work and dedication to this dream. This was definitely the highlight of my racing career!” said Moore.

“To now have the opportunity to race for the Brother Leader Tread KTM team is a dream come true. It’s the opportunity of a lifetime, but it means nothing if I don’t take advantage of it. So the goal is to put even more in! I have all the resources, knowledge and skills of the entire KTM group behind me, as well as the associated sponsors and partners. The time is now. I want to win races, championships and become a part of the orange family,” he added.

KTM South Africa’s Marketing Manager Louwrens Mahoney commented, “I am really excited to have Charan Moore on the Brother Leader Tread KTM Team! With his talent, experience and work ethic; and the team’s passion, hard work and love for the sport – together we can only achieve great things. Charan is professional in everything he does and I am really looking forward to working alongside him and the team to showcase this amazing brand – KTM.”

The 2019 Motul Roof of Africa is here