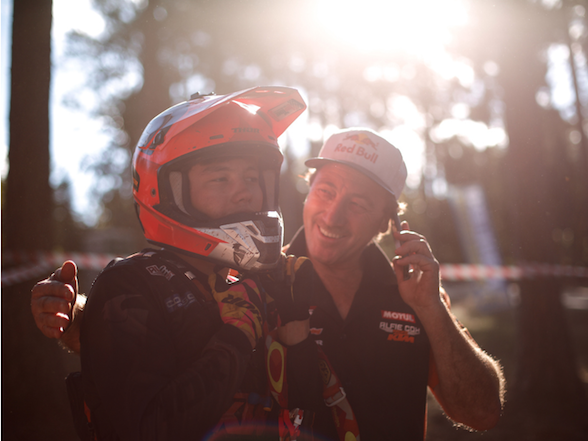 KTM South Africa is excited to announce that KwaZulu-Natal based rider Bradley Cox will be racing for the Brother Leader Tread KTM team in 2019.
The 20-year old, who is the son of motorsport legend Alfie Cox, has practically grown up on motorcycles. His interest in racing only started in 2005, however, when he began the process of stepping out of his father’s shadow to build a racing career of his own.
As the sponsorship from KTM South Africa steps in to support his racing dreams, Cox explained:
“If someday I can match my dad’s legacy, then that’s really cool. But at the end of the day, I just want to race my bike for a really long time and be a role model to the younger generation in my own way. Finding my place on the KTM South Africa factory team is a long-term dream come true for me,” he said.
The young Cox is fast becoming renowned as a multiple disciplined athlete with a talent in Motocross, Enduro and Cross Country style events.

In 2018 he finished fifth overall in the National Enduro E1 Class and secured multiple top five positions throughout the National Motocross season. His most defining moment came, however, when he chased down the National Cross Country OR3 title.
After a truly nail-biting season, he placed second overall by a mere point’s difference. As he prepares to take his place at the 2019 start line in orange kit, he commented:
“Winning that National Cross Championship will be a big goal that I’m aiming to tick off this year. I also want to have consistent top three finishes in MX2 for motocross and in the E1 Class for enduro. I’ll be fighting for a race win every time I line up though – I’m feeling really confident going into 2019.”

Signing up for a full season of racing in all three disciplines is not a task for the faint-hearted. With clear Cox racing genes, the rider is undaunted as he looks to the action-packed year ahead:
“Last year was a very good building year for me, and I’m starting to prove that I’m one of the few riders in South Africa that can race all three disciplines. I split up my training really well, and have a fitness coach that helps me. In the bigger perspective though, everything links up – speed helps my enduro riding and technical training helps me with control in motocross,” explained Cox.
The rider will continue living on his father’s farm in Zululand this year, with Pietermaritzburg’s endless training ground as his backyard.

“Living on a farm gives me the freedom to do as much offroad type training as I like. There are also so many motocross tracks nearby. A lot of enduro riders call the forests of Hilton the ‘heart of South Africa’s enduro training ground’, so being within driving distance from that is a massive bonus too,” he added. Cox will join the prestigious list of KTM athletes for Motocross, and will focus on racing for the Brother Leader Tread KTM team for Enduro and Cross Country. With the addition of a young and promising rider to KTM South Africa, the orange brand’s Managing Director Franziska Brandl enthused:
“Bradley has been part of the orange KTM family for all his life, with his father and KTM dealer Alfie Cox mentoring him. He is a great athlete who works hard and markets himself well. We cannot ask for a better addition to the team to round off the complement of riders of an already dominant team. With him representing the team in the OR3 class in Cross Country as well as the E1 class in Enduro we have a future champion in the making who will also continue to represent the brand in the MX class in Motocross. We are excited to get the 2019 season underway.”