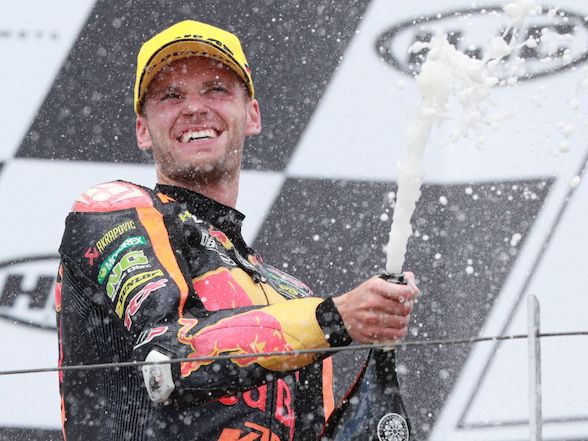 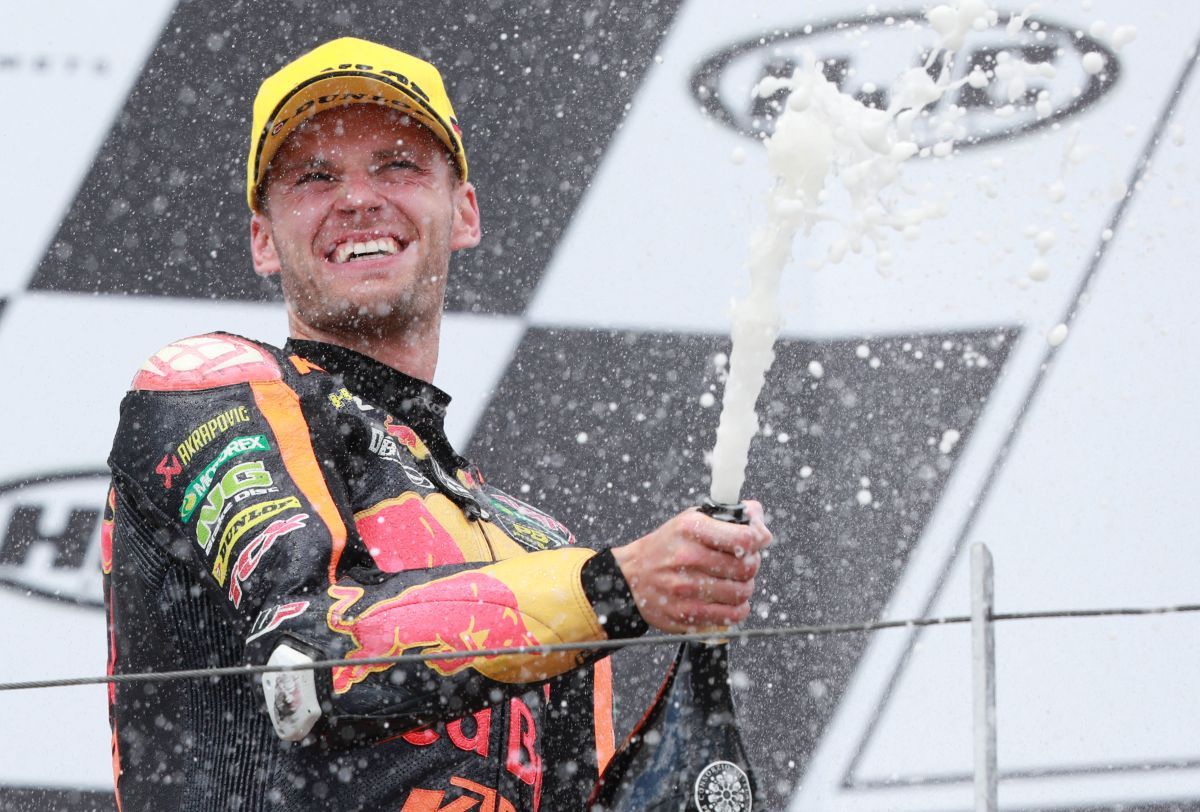 Story: Donovan Fourie
Brad Binder’s Sachsenring Moto2 round started with a tremendous amount of pressure. He has a fantastic record at the German circuit starting from a surprise podium when he was a near-unknown privateer on a Moto3 bike to taking his first Moto2 win as a factory KTM rider last year. So far, this season has been a difficult one with him starting it as a title favourite only to find that KTM has got the adoption of the new Triumph 765 triple motors very wrong, especially considering that their chassis rivals, Kalex, seem to have got it very right.

During the races at Mugello and Catalunya, Binder, while still the top KTM rider, was languishing in 15th place struggling to gain even a single point, never mind a race win. Assen showed some hope, as he qualified on the front row of the grid and was able to hold the race lead for 18 laps, using his late braking technique to defend the top place against an onslaught of Kalex riders who were clearly able to run better mid-corner speed.

After lap 18, the bugbear of the KTM Moto2 bike – a chattering that seems to be caused by lack of grip, either in hot conditions or when the tyres wear beyond a certain point – took hold and he was unable to hold off the Kalex riders any further.

He was quickly relegated to fourth place but a coming together between Lorenzo Baldassarri and championship leader Alex Marquez put him back on the podium in second place. Despite a spirited effort, gritting his teeth and riding through the chatter, he was able to hold the 0.6-sec gap to the new race leader, Augusto Fernandez, but not close it, leaving him in second across the line, although this was somewhat gifted to him by the collision between Baldasarri and Marquez. 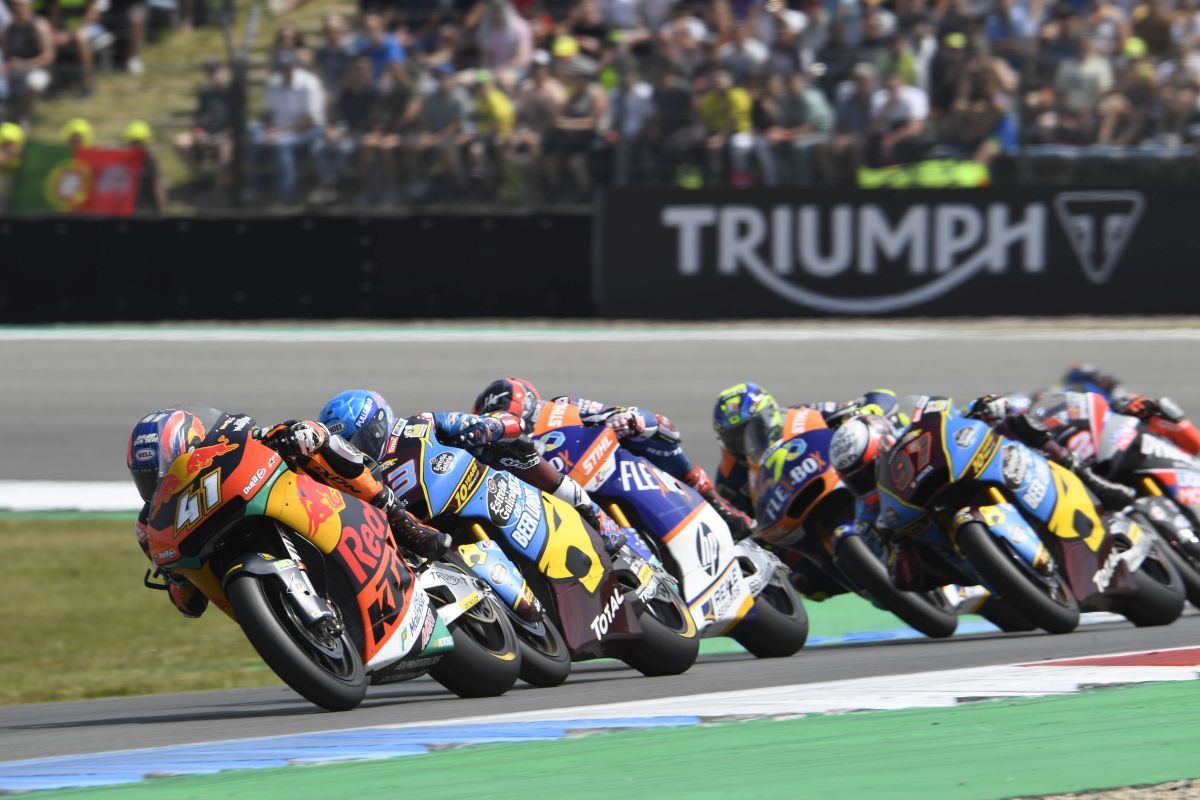 With machinery problems and extra pressure, the Sachsenring race looked like it would be a difficult affair for Binder, but he maintained his trouper outlook and even topped the timesheets on Friday.  Day two looked promising again as he once more topped the timesheets in the morning practice, so a pole during qualifying, his first for the year, was definitely on the cards.

He started the qualifying session by posting a foundation-setting 1:24.3, a time that would not get him pole but was a good run-in pace. The next two laps were wasted when he avoided following riders and traffic before getting his head down for lap four, starting with a storming pace that was 0.115 sec faster than the pole lap in the short first sector, but that was all he set as his KTM went tumbling through the gravel trap shortly afterwards.

With the cost-saving rules of Moto2 dictating that each rider be allowed just one bike, that was all for the rest of the session, and Binder’s name tumbled down the timesheets before settling in 17th place on the grid. This was a massive hit for the South African, primarily because the tight nature of the Sachsenring Circuit makes overtaking difficult.

However, after the start of the race, Binder was able to use his signature braking to gain eight places on the first lap and continued to climb the field until he was on second place on lap 12. It seemed imminent that he would catch the leader, Marquez, and take the lead but then the strain of twelve hard laps took their toll, especially on his front tyre as he continually missed apexes and was clearly battling to hold a line. 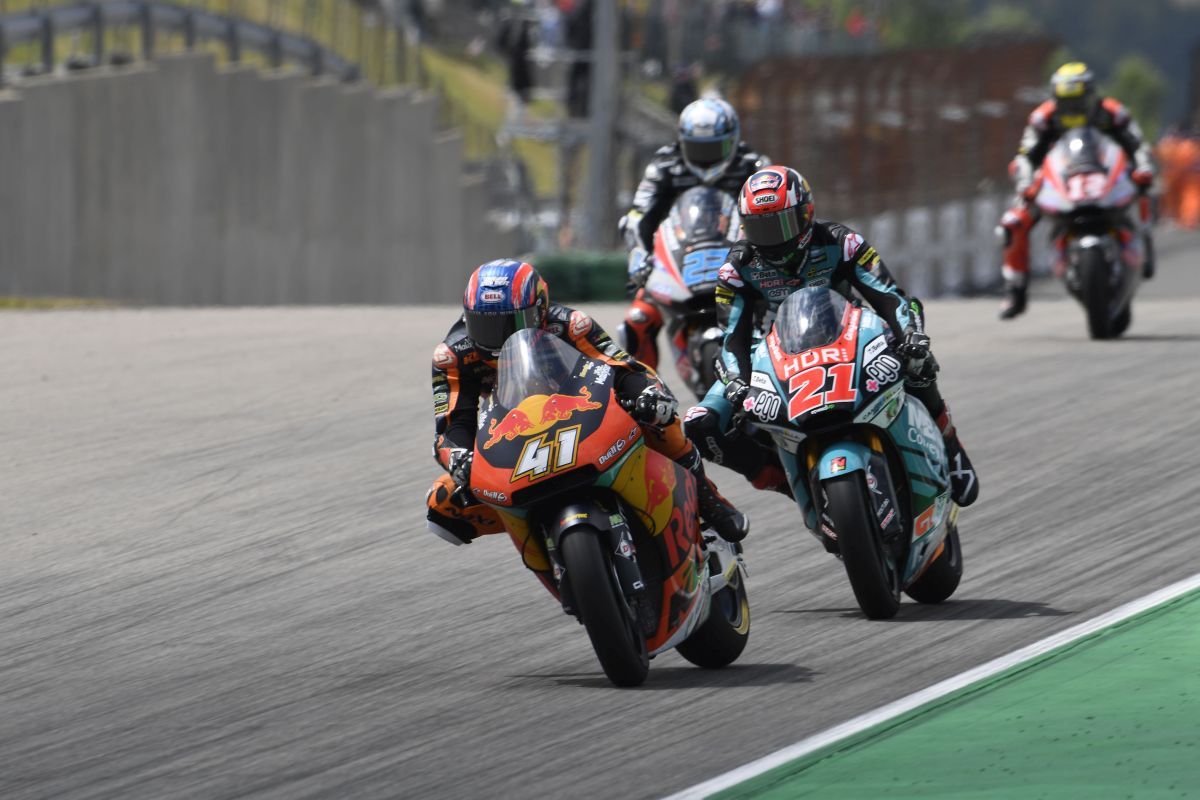 It got so bad that he even dropped to fourth place, behind local man Marcel Shrotter and fellow KTM rider Iker Lecuona. What was interesting was how Lecuona, whom we suspect is on an older version of the KTM chassis, was able to hold his mid-corner line so much better than Binder, something that, no doubt, his team will also be racking their brains over.

With relegation to fourth, Binder seemed to regroup, concentrate on holding his line through the corners despite the front tyre woes and, with three laps to go, managed to retake second place that he held onto until the finish line.

It would have been interesting to see how different Binder’s race would have been had he started on the front row, and whether the tyre issues were down to him overworking them to catch up or the continued problems of the KTM chassis. Either way, the Ajo team that run Binder’s ride and KTM have made considerable strides in his settings, showing a stark contrast in form compared his races just a month ago.

“I’m very happy. I made a great start, as I managed to move forward and hunt down the leading group. I could see that I had a competitive pace, so I tried to pass my rivals and go out on my own,” remarked Binder after the race. “But with ten laps to go I began to suffer, and everything became much harder. Despite that, I was still able to attack in the last laps. I have to thank Red Bull KTM Ajo, Aki Ajo and everyone who is working non-stop to make this happen. I’m happy to be able to fight for the podium at two races in a row. We’ve taken a big leap forward, and we can be there with a strong second half of the season.” 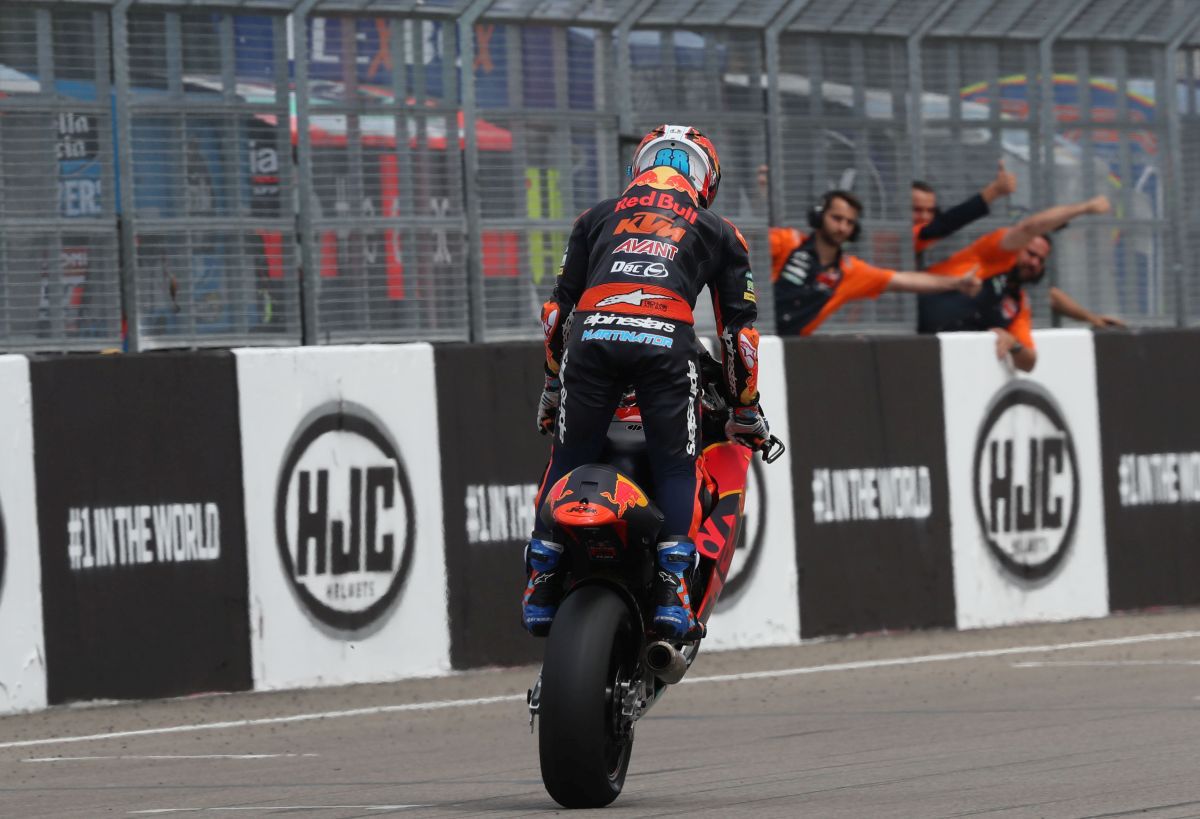 Insiders say that there will be new parts available at Brno on 4 August after the summer break. We have to wonder if they will make a profound difference. The Speed Up Moto2 chassis is running a carbon-fibre swingarm, something many of the MotoGP machines – including the KTM MotoGP bike – had already adopted some time ago. Maybe a CF swingarm is in Binder’s near-future.