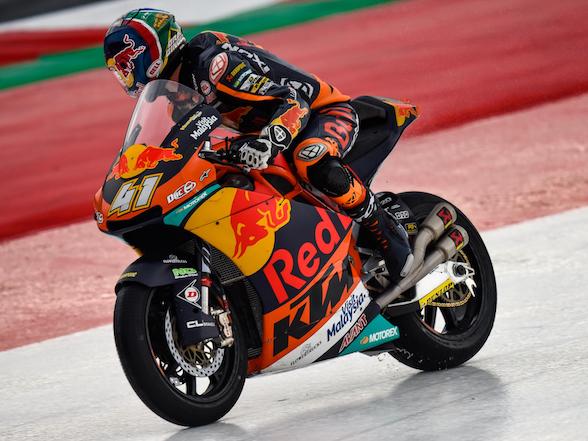 South African Brad Binder celebrated his 22nd birthday at the first day of the Austrian MotoGP round taking place at the Red Bull Ring. This is a big race for Binder and his team as Austria is the home for both KTM and their sponsor, Red Bull. Overall, things look good for them as Miguel Oliveira topped the first session of the day and finished the second in third place, just o.183 sec behind the leader, Franco Morbidelli.

While Binder was showered by well wishes and support from his fans, the Austrian weather preferred to shower him water. After just ten minutes in the first session, the heavens opened and the track remained wet for the rest of the session. This was bad news for the South African as, he still requires much dry track time to better adapt the Moto2 bike, especially with his arm now in better shape after he had yet another operation during the summer break to help cure arm pump issues. At the end of the session, he was in 19th place and 1.3 sec behind his team mate

“It’s been a difficult day. We found it hard to get grip, but I think tomorrow it will be much better. In general, all the first days have been difficult this season. Tomorrow I hope to be able to take a step forward, right from the beginning.”

Thankfully, the second session remained dry, meaning he could get to work on his setup and he managed to improve his pace, finishing the day in 18th place and now just one second behind the leader.

“We mainly have to improve the front, to get a better feeling, stop the bike better and have more confidence when entering corners. We are clear about what we need to do and tomorrow we will put it into practice. It’s been a good experience to celebrate my birthday here, and I’ll try to plan something for when we finish the GP.”

Indeed, Binder has traditionally always been slower on his first day, improving a little during the second and showing a much better turn of speed during the Sunday race. Considering that he had less track time today, things are looking quite positive for him.