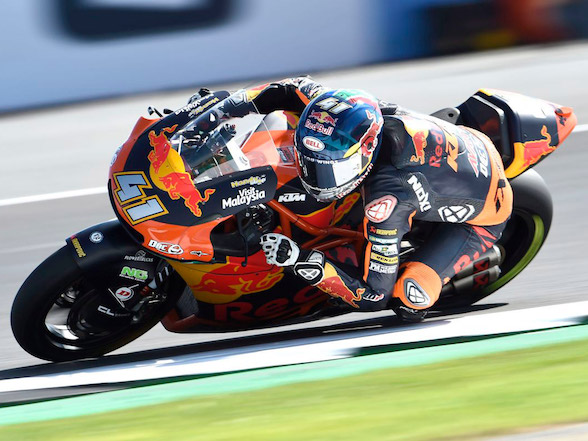 South African Brad Binder had a good opening day at Silverstone aboard his Red Bull KTM Moto2 machine, despite a scare in the first practice when his left arm, that he has had four different surgeries on since breaking it in testing in November last year, suddenly gave trouble. Silverstone is known for both its bumpiness and fast change of directions, two things that are very taxing on a rider’s forearms, and the possibility of it being re-injured is a very real one, especially as that is exactly what happened in Argentina earlier in the year after a mild tankslapper that didn’t even result in a crash. Thankfully, this was not the case at Silverstone.

“Today was good,” commented Binder. ” During the second lap in the first session, when I wanted to change direction, I felt something akin to a jerk in my left arm. It was very painful, but after half an hour I felt good.”

Despite these difficulties, he managed to finish the day quite positively. I realise that the word “positive” gets tossed around the paddock more than a MotoGP groupie, usually by riders and teams with very little to be positive about, however there is some sincerity in it on this occasion. “Today hasn’t been a great day, but we have continued to take steps forward. Finishing fifteenth is not bad – to be 1.1s off the top at Silverstone is not too big a gap, and third position is only 0.8s away.”

The position of 15th may not look too overwhelming on paper, but to be a little more than a second off the leader, at a long track like Silverstone where a lap takes more than two minutes, is particularly not bad, especially for Binder who has proven to be a Sunday rider. To put this into perspective for you, after the first practice at the last race in Austria, he was 1.3 sec behind the leader. This may seem like only a meagre amount slower than today, but the Red Bull Ring lap took more than 25% less time to complete. That would mean that he is currently half a second closer to the leaders than in Austria, and there he finished a career best seventh.

This is all of course just theory, and the race itself will reveal all, but Binder seems to understand his weak points and that, in itself, is already a step in the right direction: “We are working hard and are focused for tomorrow so that we can take a big step forward. I have to basically improve two points of my riding, because I feel good with the bike. I’m a bit slow on the back straight and the third from last corner, and if I can change that I can cut half a second. That would take me closer to the front.”