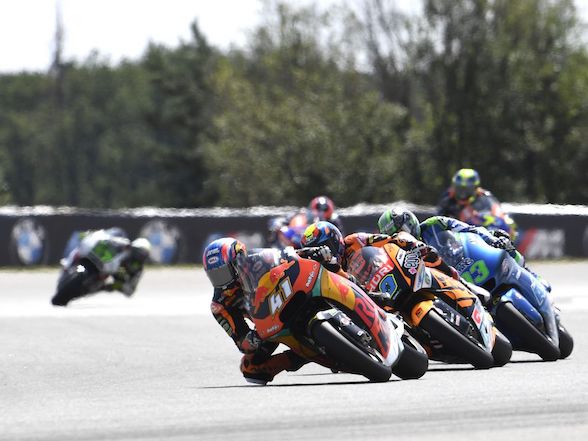 Brad Binder on Brno: “I just tried simply to stay on the right line” 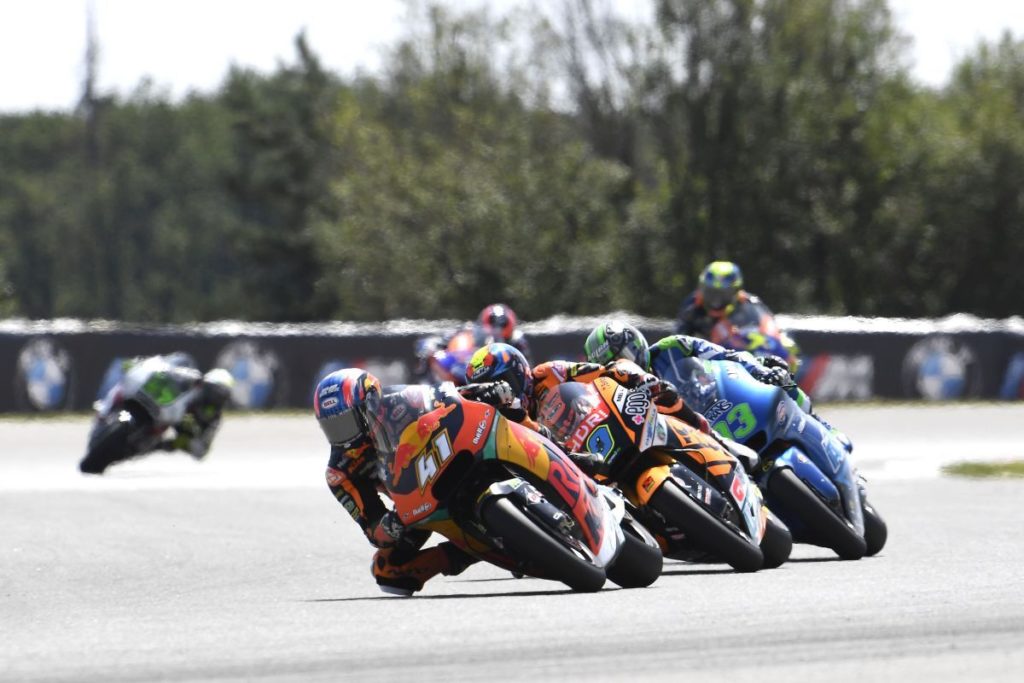 After two podiums on not perfect machinery before the summer break, Brad Binder and his Red Bull KTM Ajo team were looking forward to trying a completely new chassis for the Czech Republic Moto2 race at Brno. Since the introduction of Triumph 765 motors as the spec engine for the Moto2 class at the beginning of this year, the KTM chassis been struggling with a strange combination of lack of rear-end grip and a front-end chatter – the worst of both worlds.

KTM made some strides during the year, culminating in the two podiums in the last two races before the European summer break. The new chassis promised, on paper, to solve all their problems, and would have led to a solid second half of the year – possibly even a chance at closing the 52 point gap to the championship leader.

We say “on paper” regarding the new chassis because strict testing rules for the Moto2 class do not permit any testing during the summer break, test teams included. The first time this chassis was ridden on was by Brad Binder and his teammate Jorge Martin during the first practice on Friday.

Initially, it went well, with Binder showing his usual early practice pace and finishing the first session in a promising second place, just o.o60 sec behind the leader. As is often the way with Binder, he finds the limit of the machine in the first session, and battles to discover more through set up during the weekend. In the second session, while everyone else improved, Binder managed a time just 0.05 sec faster than the previous session that was good for only 11th place.

“It was a pretty positive day,” remarked Binder. “FP1 went well, although we had to deal with a few problems that occurred during the session. In the afternoon, it was a bit harder to find the right direction.” 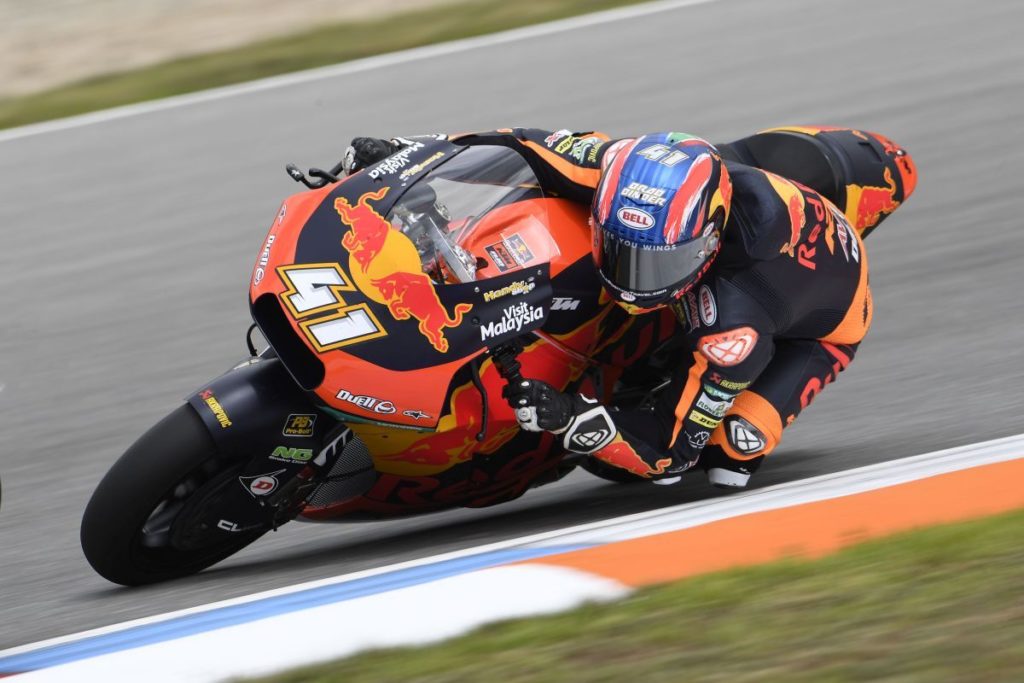 The tough, partly wet Saturday morning session went even worse, seeing him drop further 13th. Qualifying was a disaster of another kind when he was stuck on wet tyres as the track dried more and more. Moto2 riders are allowed only one bike, and they cannot jump from a motorcycle with a wet setup to a dry one. By the time the track dried enough, it was too late for the team to swop to slicks and change the entire suspension setup, unlike the teams that gambled with the dry set up earlier. And so Binder found himself down in 16th on the grid.

“It’s been a difficult weekend so far. We started well in FP1, but since then I haven’t felt comfortable on the bike. We have been working hard but the things we have been trying out since yesterday have not worked as we had expected, so we have to keep trying until we are at our best.”

During the race, he did his usual flying first lap gaining five positions and eventually settled in seventh place. Sadly, his pace seemed to drop off as the race continued, and he was down to tenth place with seven laps to go. Going into Turn 11 – the first left-hander of an uphill chicane – he lost the front early, skidding into the gravel trap at high speed.

“I’m not pleased with how it went today, but I’m physically fine, and that’s the most important point. At this race, we didn’t find the required setup to compete with the top riders. I gave 100% throughout the contest, I pushed ahead at the beginning, however little by little, my rivals were getting away, and I started losing positions. By that time, I just tried simply to stay on the right line, but in the end, I crashed. Now is the moment to think it through and to analyse the information we gathered this weekend. We have a lot of work to do.” 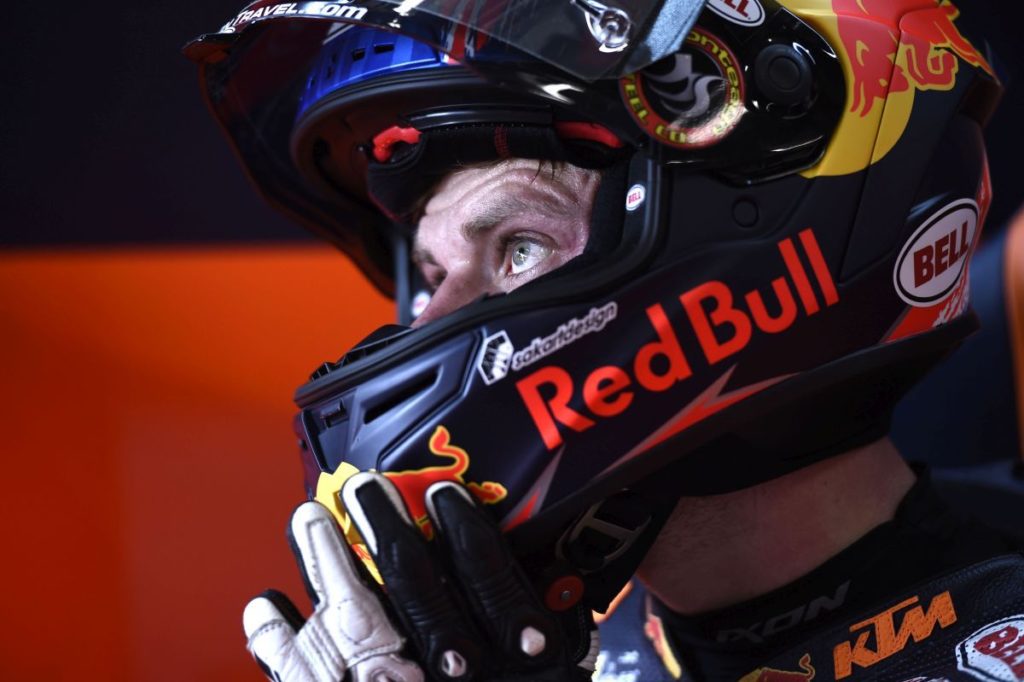 Interestingly, and more worrying, Binder’s teammate finished the race in 13th, behind the older KTM chassis of Iker Lecuona and rookie Marco Bezzecchi. A reminder that this is off the back of two podiums with the older chassis.

All is not lost, however, because this chassis is entirely new and properly requires some tweaking. Next weekend sees the teams racing at the Red Bull Ring in Austria, a track whose hard braking stop-go corners might suit Binder’s style. After that, they are remaining for a day’s testing. With some luck, we will see a strong Binder for the rest of the year.