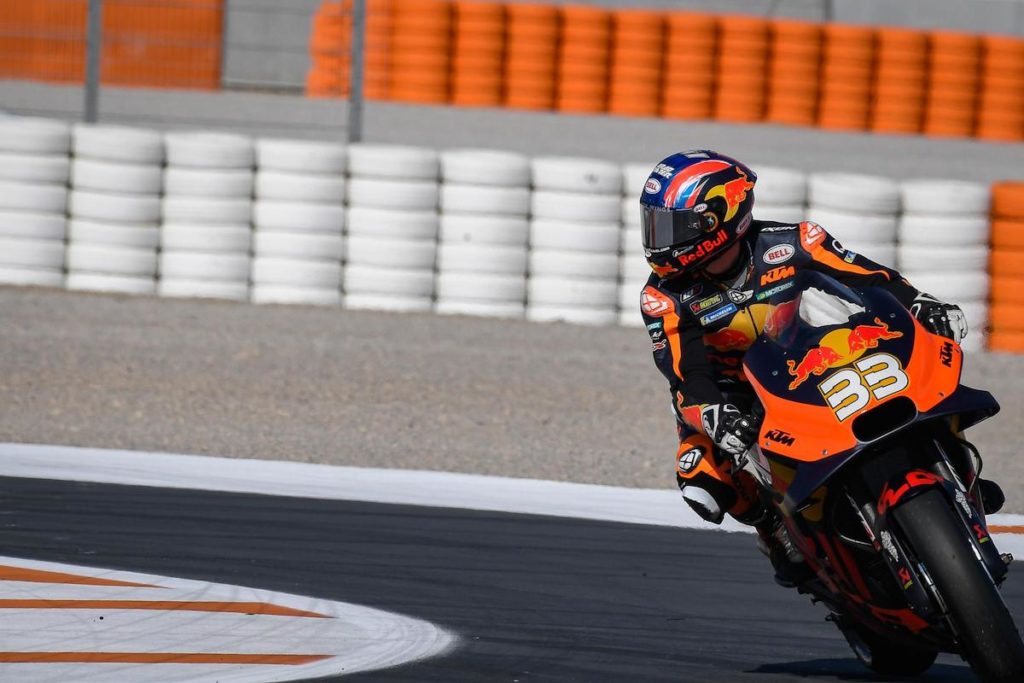 Story: Harry Fisher
With the second test carries on, everyone is madly scrambling to decipher what they have seen on track and in the pits while every rider and his dog has been corralled and bombarded with questions.

We’re used to the precise assessments from the old hands; after all, they do most of their talking on track. But every now and then, we are reminded that this is the pinnacle of the sport, that we are watching not mere mortals, but other-worldly talents riding these machines, and that it even impresses someone who you would expect to be more blasé about it.

The wide-eyed awe that the newcomer to the MotoGP ranks displays is all too soon displaced by knowledge that it can be done if you are prepared to work hard enough and have the talent to begin with which, obviously, they have, or they wouldn’t be there in the first place.

But for those fleeting first few moments of a MotoGP career, the innocence is a pleasure to see and nowhere more so than in Brad Binder, new recruit to the KTM factory team. I have rarely been so impressed by so complete a lack of guile; by open ‘wow, isn’t this amazing?’ enthusiasm more becoming of a young child than a seasoned racer; by a completely open and honest appraisal of where he is. Quick with self-deprecation, even quicker with acknowledgement of the skill of those around him, grateful for the opportunity, completely realistic about his performance, his skill levels and the amount he has to learn in a very short time. 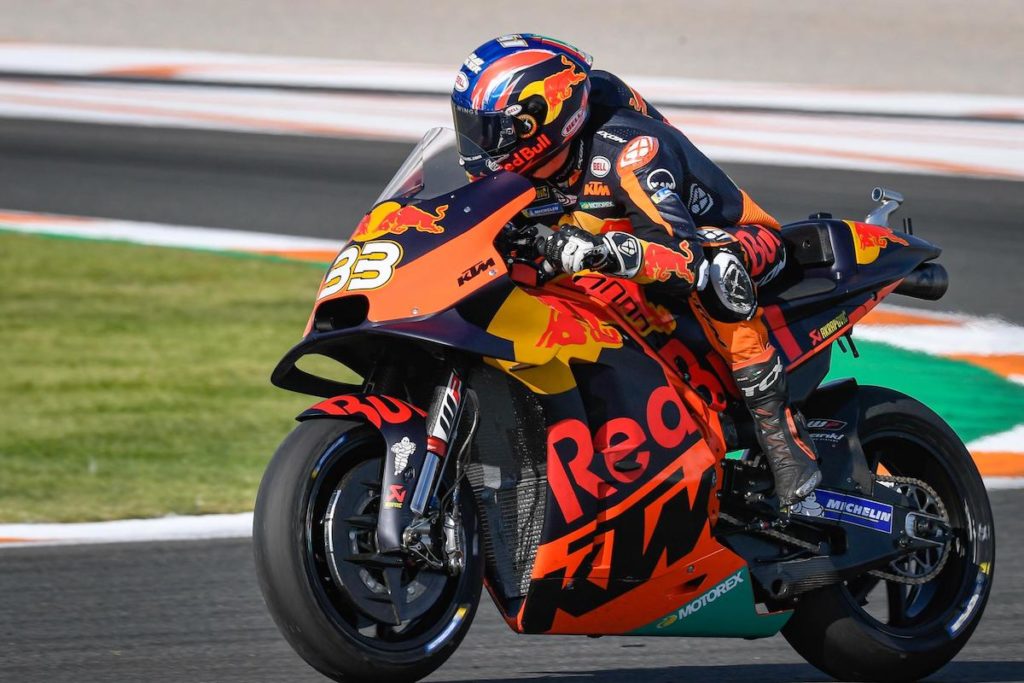 “It was a cool two days and completely different to what I expected,” he said. “To jump on the bike and to feel more and more comfortable, but I got to a point where I was riding more and more like I was on my Moto2 bike and that made it difficult for me to improve.”

“It is mainly just the lines and the way you pick up the bike on the exit of the corners,” he added. “The way you use the throttle is crazy. You use so much more throttle on a GP bike than the Moto2 bike when you’d think it is the complete opposite.

“So it is really hard to try and work it out in my head and improve. The more I rode the easier it felt to get to a certain point, but to go faster I kept doing the wrong things, so making life difficult.”

When asked what the ‘wrong things’ were, again he was completely open.

“Braking too late, going past the corner and not opening the throttle: pretty much!”

“What I found I am doing too often is going past the apex of the corner so instead of getting the bike stopped and around the apex I was making too many metres. You gotta use the power…and I don’t know exactly what I was trying to do to be honest!”

Brad has access to team-mate Pol Espargaro’s data but acknowledged that there was a difference between understanding what someone is doing and trying to do it yourself.

“It’s incredible, to see his data and some of the things he is doing is insane. I have a lot to learn,” Binder smiled.

“The way he opened the throttle and the way he holds the throttle with angle. Some of the things look insane, but I am sure it is one of those things that will come with time and when I find more confidence on the bike.”

Espargaro was happy to let Binder follow him for a few laps, but “he was still way too fast! I could see him for a couple of corners, then he kinda disappeared into the sunset.”

Binder was also quick to realise that KTM test rider Dani Pedrosa could help him;.

“I felt completely lost at one stage and asked my team to go to Dani to turn me around a little bit, so he was quite happy to help me,” Binder revealed. “I was quite fortunate today that my quickest lap time was behind him.

“All the things that I saw is how I noticed where I was going wrong, where I really saw how quickly he gets around the corners and picks the bike up. Whereas I was going in and going past and not doing a very good job.” 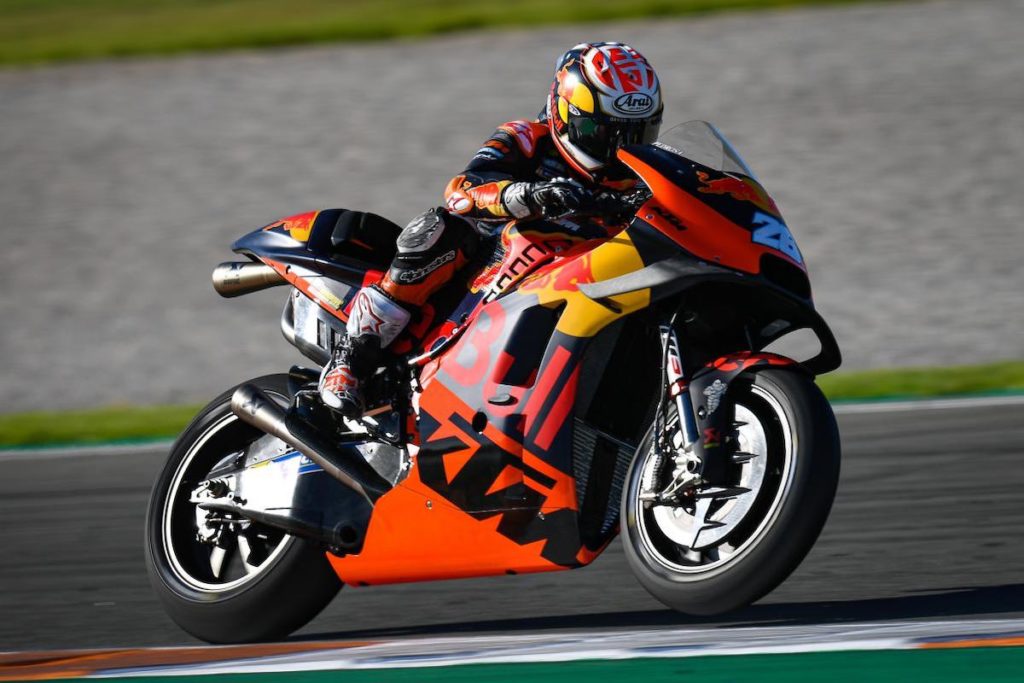 Binder was full of praise for the KTM team.

“Working with the new team has been amazing,” he said. “The guys are awesome, there is no pressure and they are super-chilled. They want me to improve in my own time. I had the little crash there at the end but other than that everything was pretty good today.

“Now I can relax before Jerez and analyse what I need to change and from then on go forward.

“Physically I feel good, and I’m actually really surprised. I thought I would have a lot more pain or would suffer a lot more, but I think it has a lot to do with the fact that I am still quite slow.”

“When you are two seconds a lap quicker then the way your body works on the bike is quite different. In mid-season I had a trainer come to stay with me to learn some new things but other than that, nothing crazy.

“I definitely made a step in the second half of the season but the main thing I felt riding this bike is on my forearms. They, and the hands, work a lot harder. That will come.”

We know that Binder will get there; that he will conquer his demons and learn how to ride a MotoGP machine as it is supposed to be ridden and part of the joy will be seeing him develop his skill over the coming months and years to the point where he will be challenging for the title, deserving his place amongst the greats. For the meantime, however, let’s just bask in his excitement and joy at finally getting to where we all knew he was headed anyway.