Brad Binder and his Red Bull Ajo KTM Moto2 Team had a difficult weekend at Le Mans, after spending the whole day on Friday out of the top 20, then finishing Saturday morning practice in 17th. Finally, things looked up in qualifying when he placed eighth.

Keep in mind that this is the first time Brad Binder has ridden a Moto2 bike at Le Mans after he missed this round last year after suffering a wrist injury. 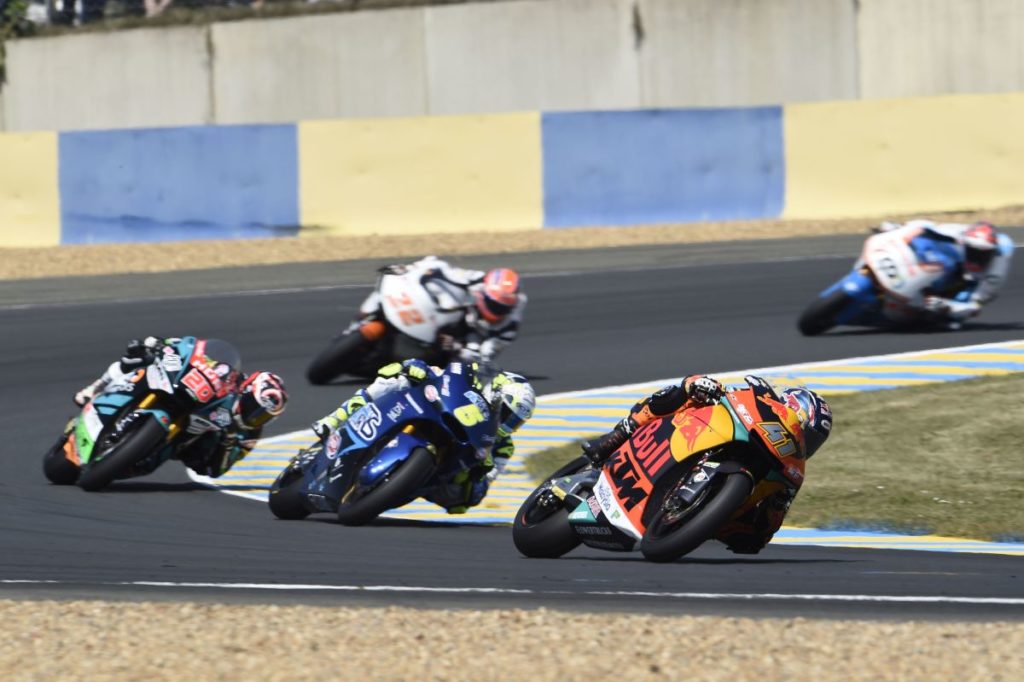 Binder’s start was excellent, and he went into the first corner in fourth. He stayed there for some laps before eventually slipping back and dicing for a top five with his team mate and a small group of other riders. At this point, Italian rider Lorenzo Baldassarri lost the front in the turn two chicane and went sliding along the track right in front of Binder’s KTM. Some evasive action meant he did not crash, but he did lose three seconds by shutting off and running wide.

Eventually, after chasing Frenchman Fabio Quatararo for the last part of the race, he finished ninth. This is not a bad result given how they have been struggling all weekend.

“It’s been a very difficult weekend, right from the beginning. Even so, I feel that I rode well in the race; I gave 100% from start to finish. I was unlucky with the Baldassarri crash, because he was right in front of me and I lost a lot of time deciding where to go, as he was going in one direction and his bike was going in the other. We have to keep working hard to take a step forward from where we are now. We have a test next week, and I want to work hard and find something that improves what we have now, because I feel we can give more.”

Previous Post Darryn Binder on top finish: "I was feeling the pain of the crash"
Next Post See Brad Binder's KTM Moto2 bike at the South Africa Bike Festival