There were 15 finalists in the 2017 SA Pirelli Bike of the Year and only one winner. You might agree with the judges and you might not, so The Bike Show decided to take a look at each one and see why what was where. Click Next or Previous on the icons at the bottom of the page to see more, or click here to go to the beginning. In didn’t make the top six, but it made the finals – the Kawasaki Versys-X 300: 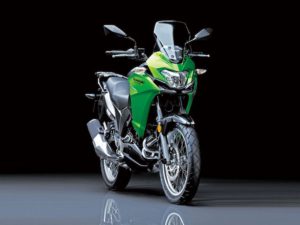 What we have here is essentially what everyone’s been asking for – lightweight, go anywhere adventure bikes. There are two new entries to this new class – this, the Kawasaki Versys-X 300, and the Honda CRF250 Rally. Obviously there was a bit of a toss up as to which of these two was going to make it into the BOTY finals, because as the rules go you really need only one.

The Rally is everything you asked for in an off-road bike; it is essentially a rally bike with road-going bits added on. The problem is that it only makes 24hp which, for South African openness and distances, is a little bit too little. It also has a very rugged sort of ergonomics, but not much in the way of comfort, that might be an issue after 15 hours of freeways, country roads, gravel freeways and perhaps some mountain climbs.

So that leaves us with the Versys-X 300. It does not have half the off-road rugged ability of the CRF, but what it does have is 39hp and a more neutral riding position, something you’ll be grateful for on 99% of South African adventure rides. It also has a price of R79,000 which is a lot less than R86,000 of the CRF.

There is still room for improvement, though. Put it this way – if we had a bike with the off-road ability of the CRF and the comfort, power and price of the Versys, then I’m quite sure we would have a BOTY winner.

Against: might struggle if the going gets very rough.